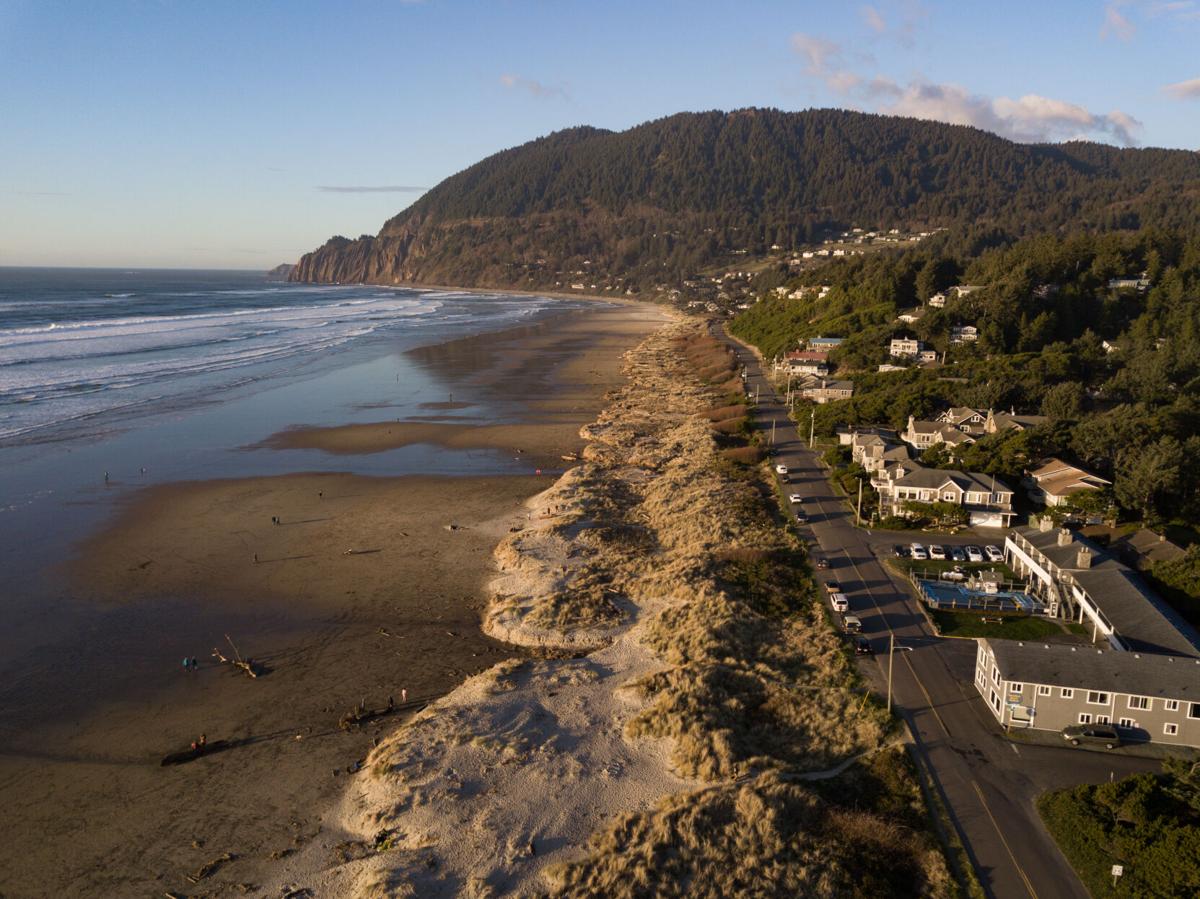 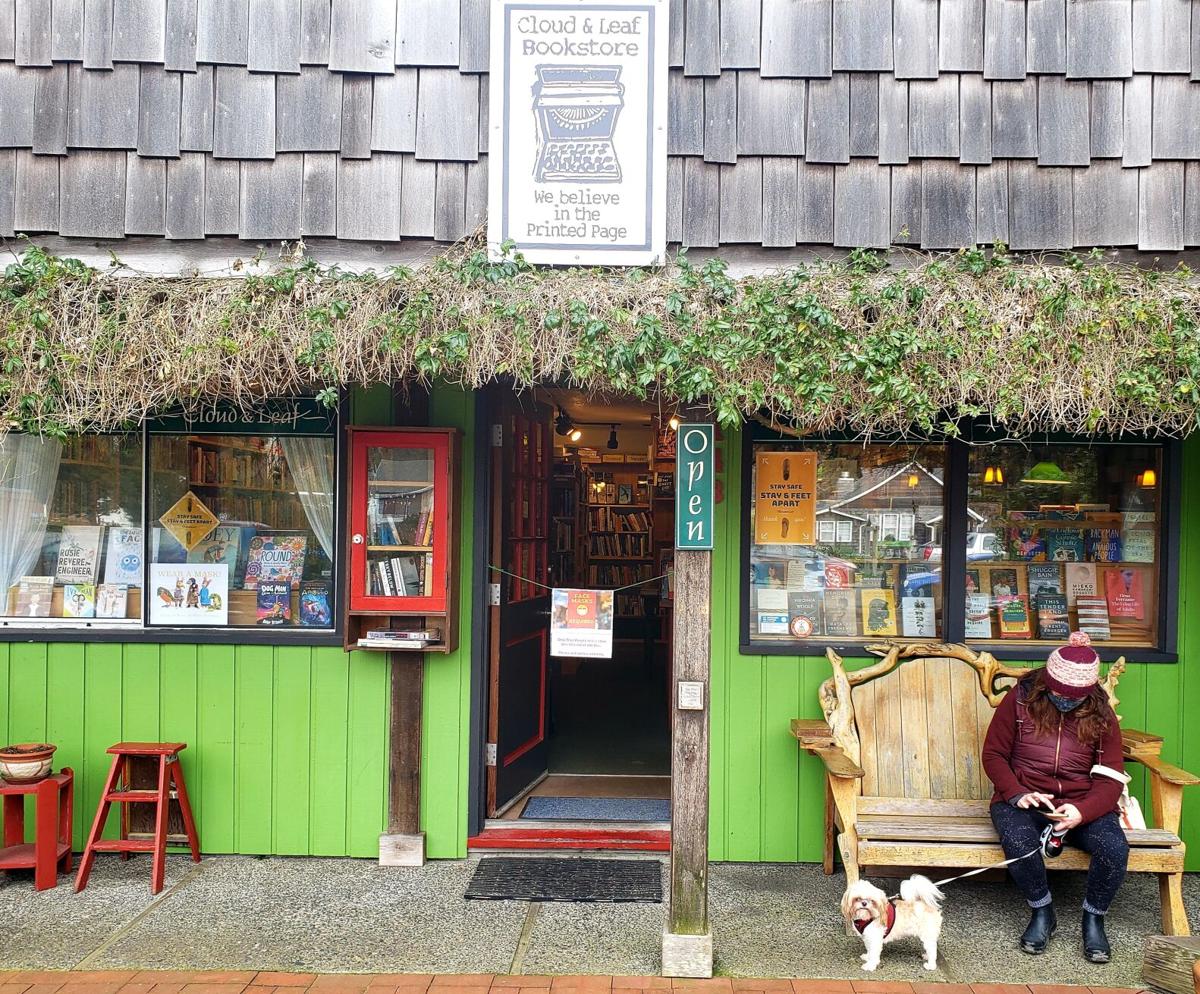 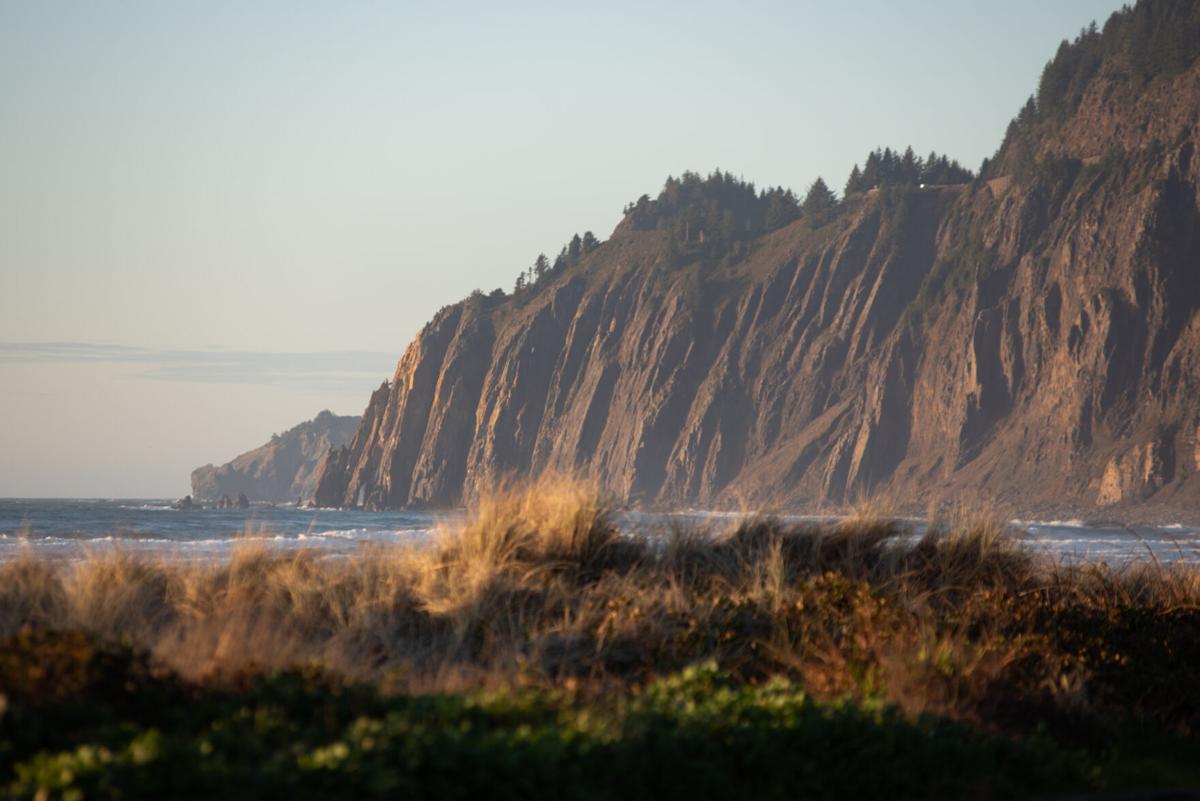 The cliffs of Neah-Kah-Nie Mountain seen from Manzanita. 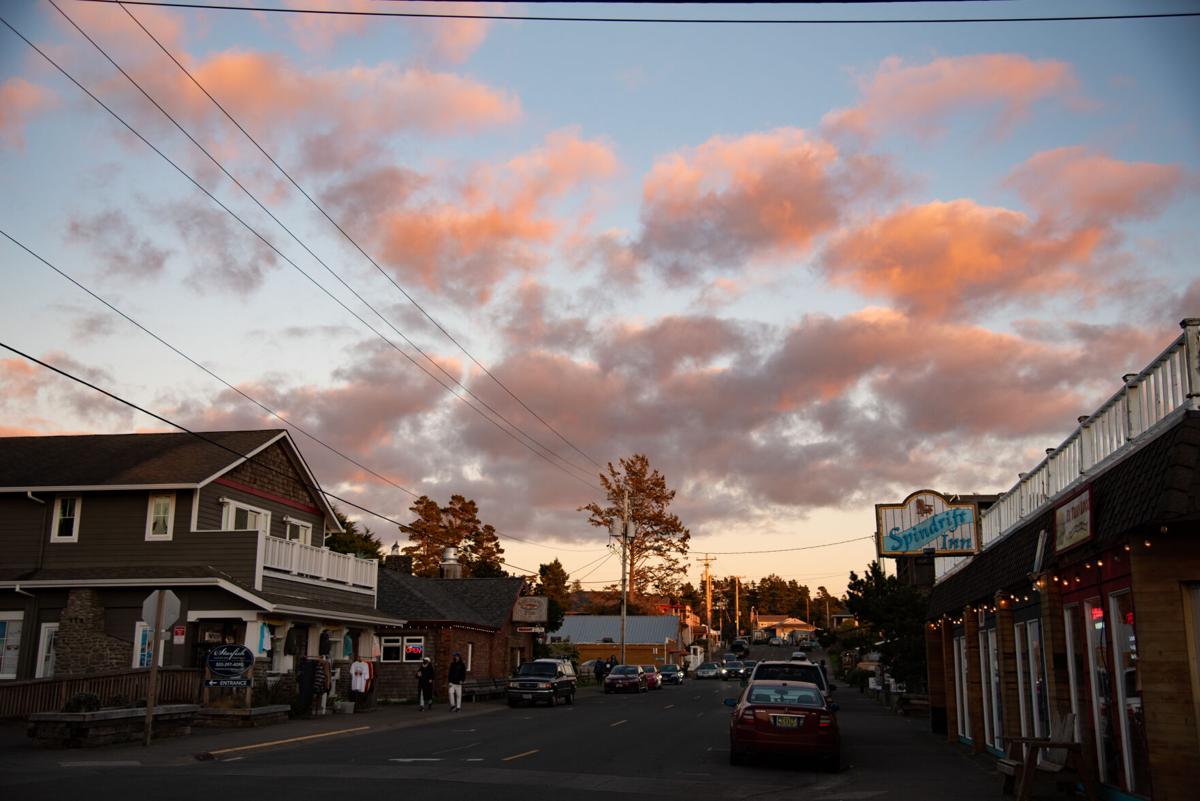 Clouds glow pink at sunset over Laneda Avenue in Manzanita. 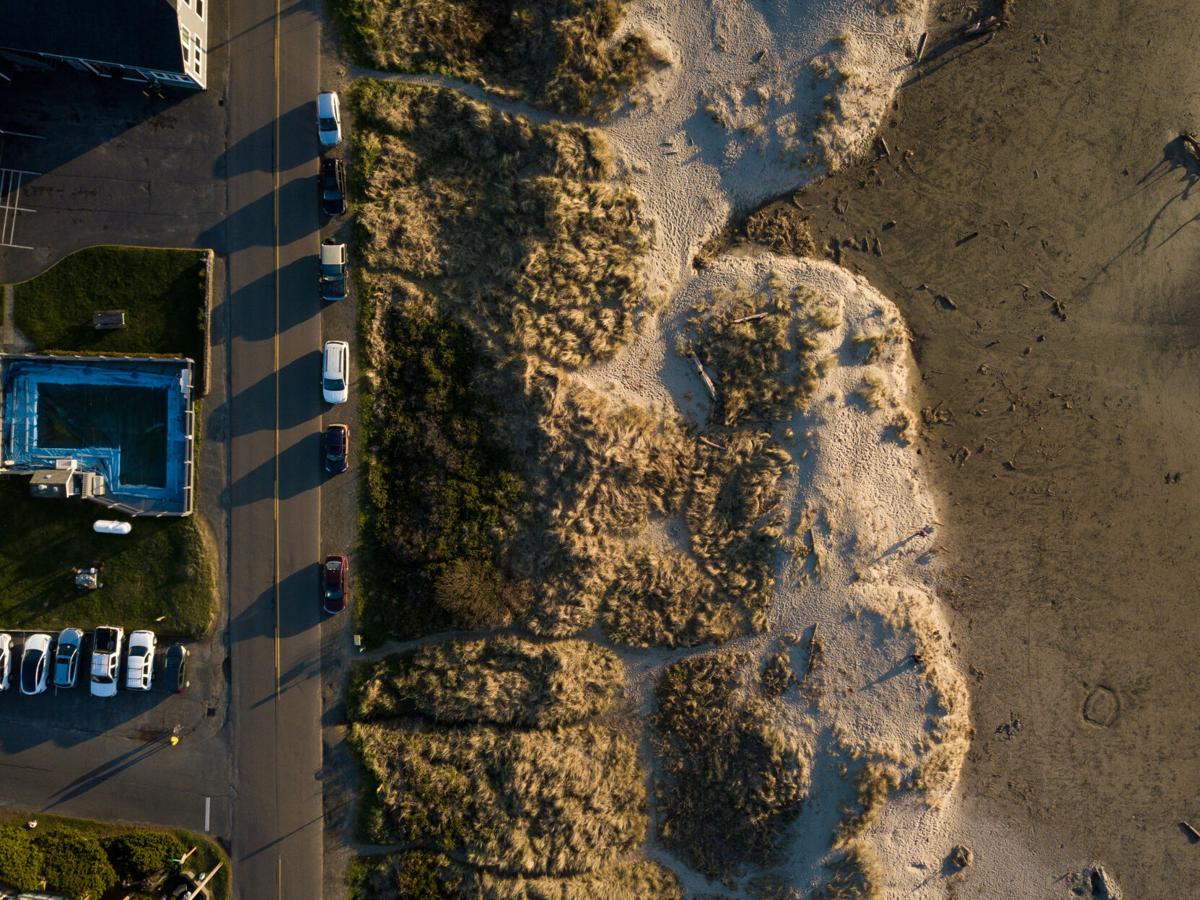 Beach Street runs between Manzanita and the beach. 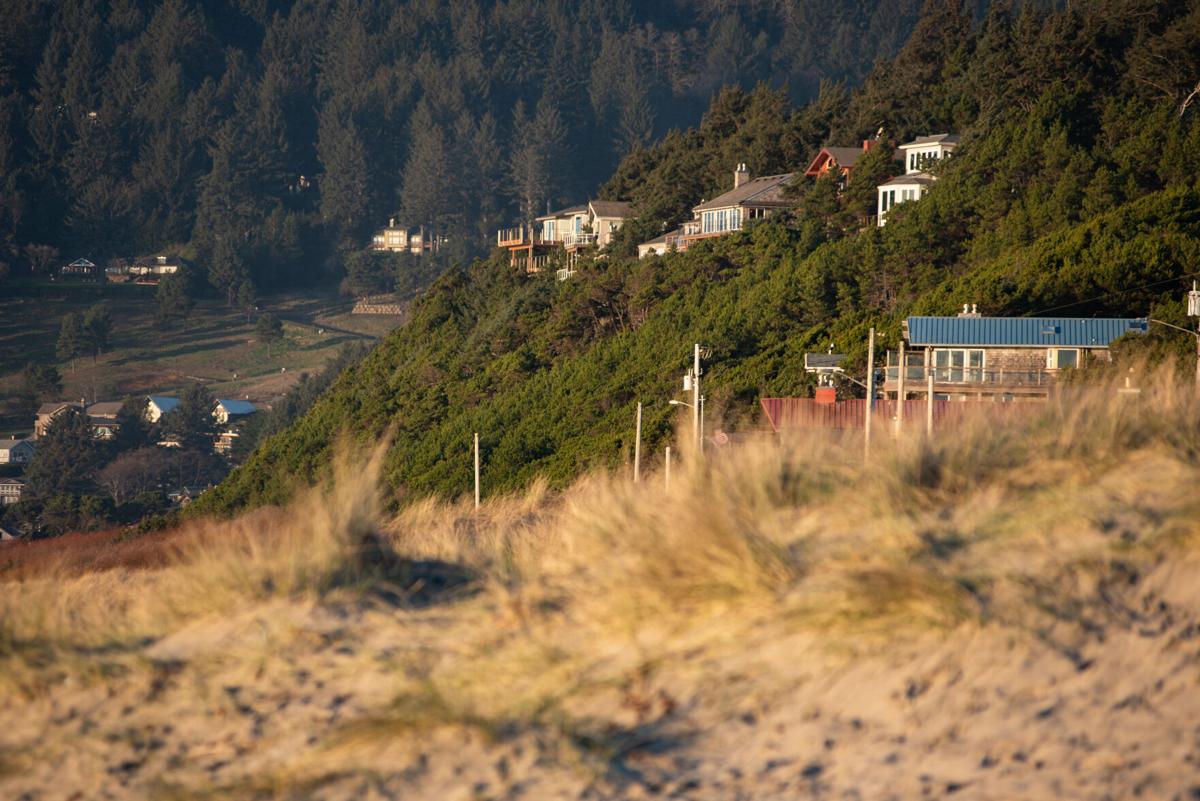 Homes in Manzanita dot the hillside.

Deborah Reed lived in Portland for about 20 years before finding Manzanita in 2011. She had always gone to Cannon Beach, when it was smaller, more manageable and less crowded. It wasn’t until the author was invited to give a reading and talk about her first novel at the Manzanita Writers’ Series that she found the small, charming village further south near the ocean. Reed continued to visit, spending two weeks at a time to write, until deciding to move to the city full-time about six years ago. In 2019, she purchased Cloud & Leaf Bookstore.

Reed said Manzanita is “both beautiful and treacherous at the same time, which makes for an interesting combination.” She lamented how easy it is to walk on the beach or in the forest with her dog. “And that’s really ultimately what Manzanita is and does for people. I think it’s what makes it so appealing,” she said. “It’s so beautiful here and peaceful, and it’s a way of shutting out all the noise and stress from the rest of the world, especially now.”

In the decade since she has known the sometimes sleepy village, others have also found it, including “Saturday Night Live” actress Aidy Bryant. Nestled between Nehalem Bay State Park and Oswald West State Park, the city is easy to pass by: U.S. Highway 101, a hub for coastal travel, does not run through it.

With a relaxed, low-key atmosphere, miles of quiet beach and charming arts and dining options, more people have chosen to visit. Walking down Laneda Avenue, the city’s main street, to the beach beneath the cliffs of Neah-Kah-Nie Mountain, Manzanita feels intimate — a sanctuary — even amid increased foot traffic.

The city’s surge in popularity is in part spill over from growth in Portland, Seattle and the rest of the North Coast over the last decade. Manzanita has about 650 permanent residents. About 75% of homes are owned by second home owners. Vacation rentals were capped by the City Council at 17.5% in the 1990s. During the coronavirus pandemic, the population has grown as many second homeowners became full-time residents and home sales have soared as people flocked from larger cities. Housing has become increasingly unaffordable. Business owners say it is hard to find service industry workers who sometimes have to commute as far south as Tillamook.

Mayor Mike Scott said it is hard to tell whether people will stay and work remotely or move away. “The last person that comes into Manzanita wants to be the last one to come in and not let anybody else come in because we’re trying to keep it a secret,” Scott said. “We’re not a secret anymore.”

However, the mayor said tourism is the only industry Manzanita has ever had. It was an outgrowth of the timber and fishing industries in Wheeler and Nehalem, and became a place for people to get away and enjoy the ocean. The town began taking shape in the early 1900s and was incorporated in 1946. “It’s always been visitors,” Scott said. “But it’s hard for people to adapt to more and more people coming in here when you’re a full-time resident. Some of them are not real happy with it. I know there are some people who would like to just close the gate up at the top of the hill and not let anybody else in, but it’s just not practical. So what we have to do is continue to do what we have been doing — just do the best job possible managing the growth. We’re hemmed in by Neah-Kah-Nie Mountain on one side, and south of us, we have Nehalem Bay State Park. So there’s no real way for us to grow. So we’re trapped in our smallness.”

Despite its increased popularity, Manzanita has maintained its charm. Vera Wildauer, the program lead for the Hoffman Center for the Arts’ writing programs and co-founder of the Manzanita Writers’ Series, said before she moved to Manzanita full-time in 2006, she was attached to the bookstore, clothing stores and coffee shops. “That was a huge reason I did everything I could to retire here,” Wildauer said. “I can walk to the bookstore, read while having a coffee nearby. I can choose from three different grocery stores. Frankly, there are weeks when I never get in my car.”

She said visitor traffic has changed quite a bit. “It used to be that summer, spring break and various off-season holidays would bring a surge of visitors. Then, between Jan. 2 and spring break, it was super quiet. Now we have visitors pretty much all year-round — at least on the weekends,” Wildauer said.

Reed and Wildauer said a lot of shops used to close for a month or dramatically cut back their hours. Businesses owners would leave and go on vacation. But that doesn’t happen anymore. “It feels like the town just keeps going,” Reed said.

But some think the town hasn’t changed all that much.

“Honestly, I’d have to say the thing that I personally find engaging is that it really hasn’t changed all that much,” said Tom Campbell, the president of the Nehalem Valley Historical Society. “The shops have stayed fairly much the same. You see a few buildings on Laneda that are newer, but the City Council is pretty active in trying to maintain the character of this town as a little village.”

Dan Haag has lived on the North Coast for about 30 years. He operates the Manzanita Visitors Center and said that as development and popularity rise, there are a lot of people counterbalancing that by working hard to make sure the city stays beautiful. “I think we have cultivated a population of people who really care about preserving not only the little village feel, but also a group of people that are really connected and dedicated to things like the arts,” Haag said. “We have a really vibrant artist community here — writers, painters, sculptors. We do attract a lot of those folks.”

Haag said a lot of his efforts have been focused on encouraging visitors to be mindful and take care of the natural areas by picking up garbage and to minimize light and noise. “We’re not Lincoln City. We don’t have lots of big festivals and parties — and I’m not disparaging them in any way, but it’s just a different scene,” Haag said. “Same with Seaside or any other bigger talent Highway 101 runs through. We’re sleepy and we want to keep it that way. It’s kind of our badge of honor.”