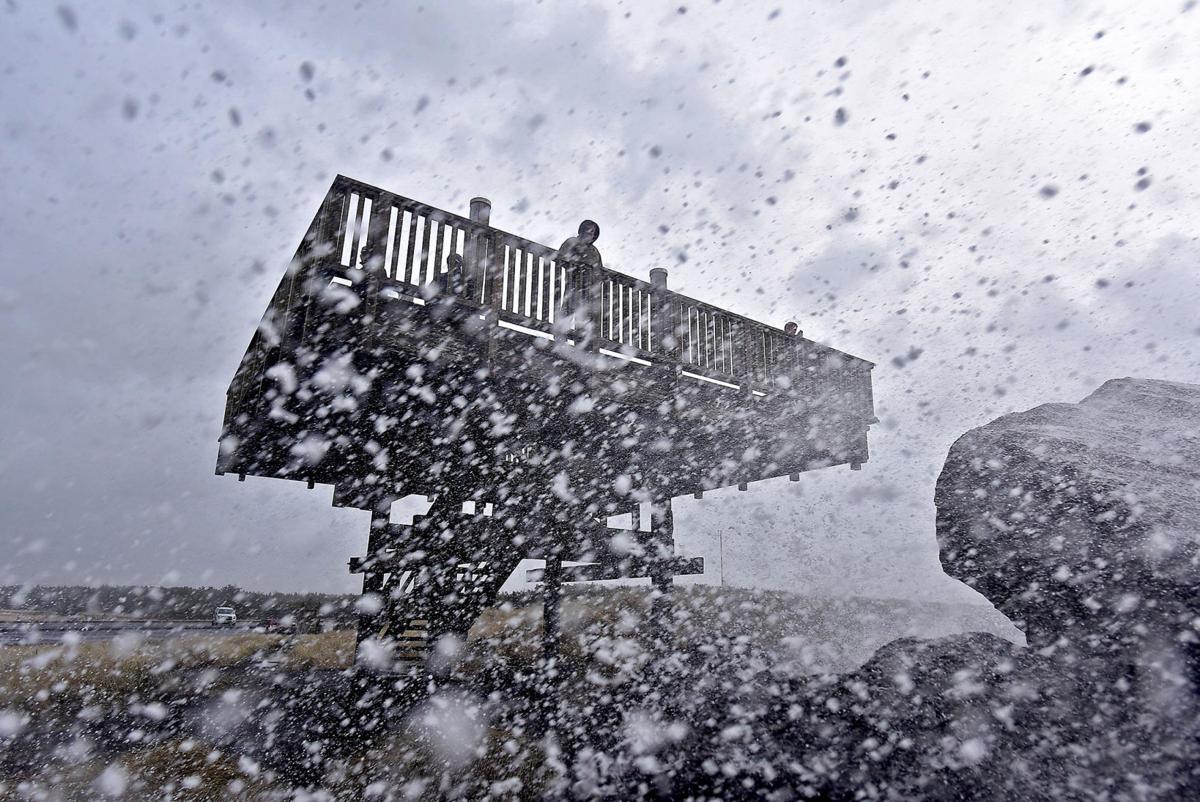 Waves crash over the South Jetty at Fort Stevens State Park as people take to the observation tower to watch a storm in winter 2018. 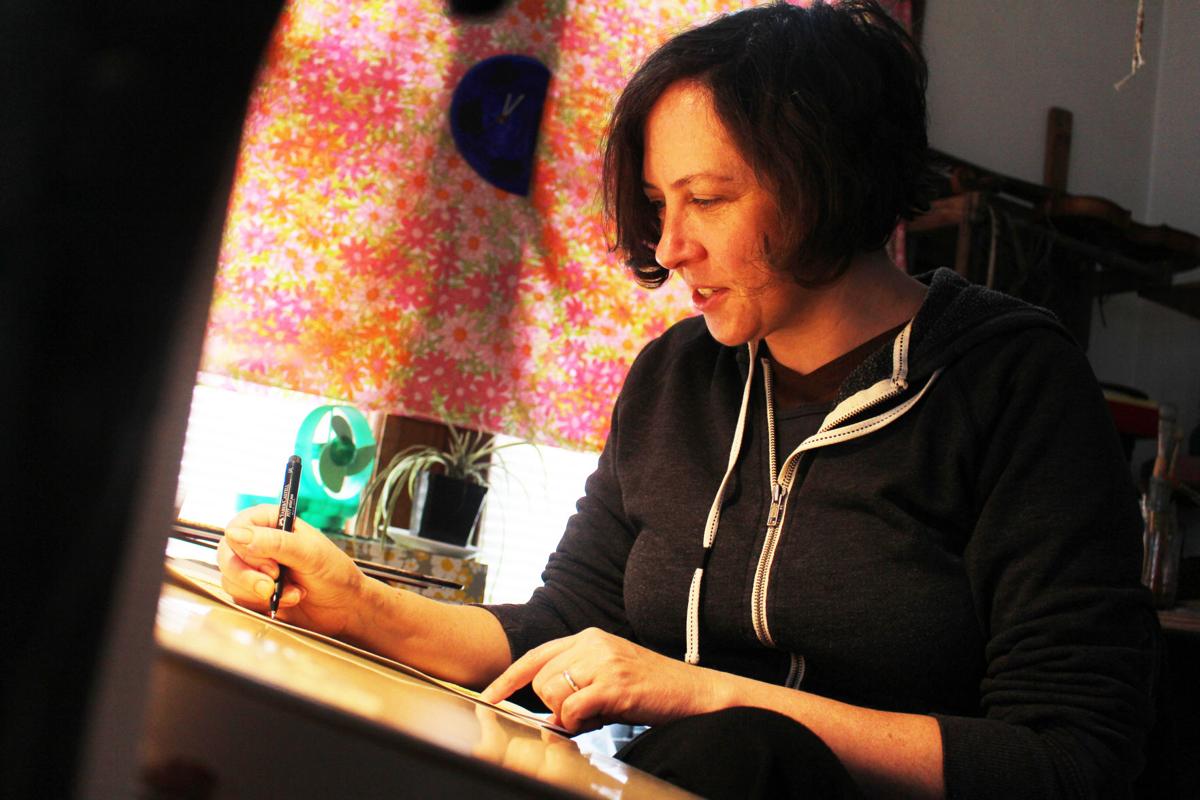 Astoria artist Sally Lackaff works on the illustrations for a children's book in her Astoria studio. 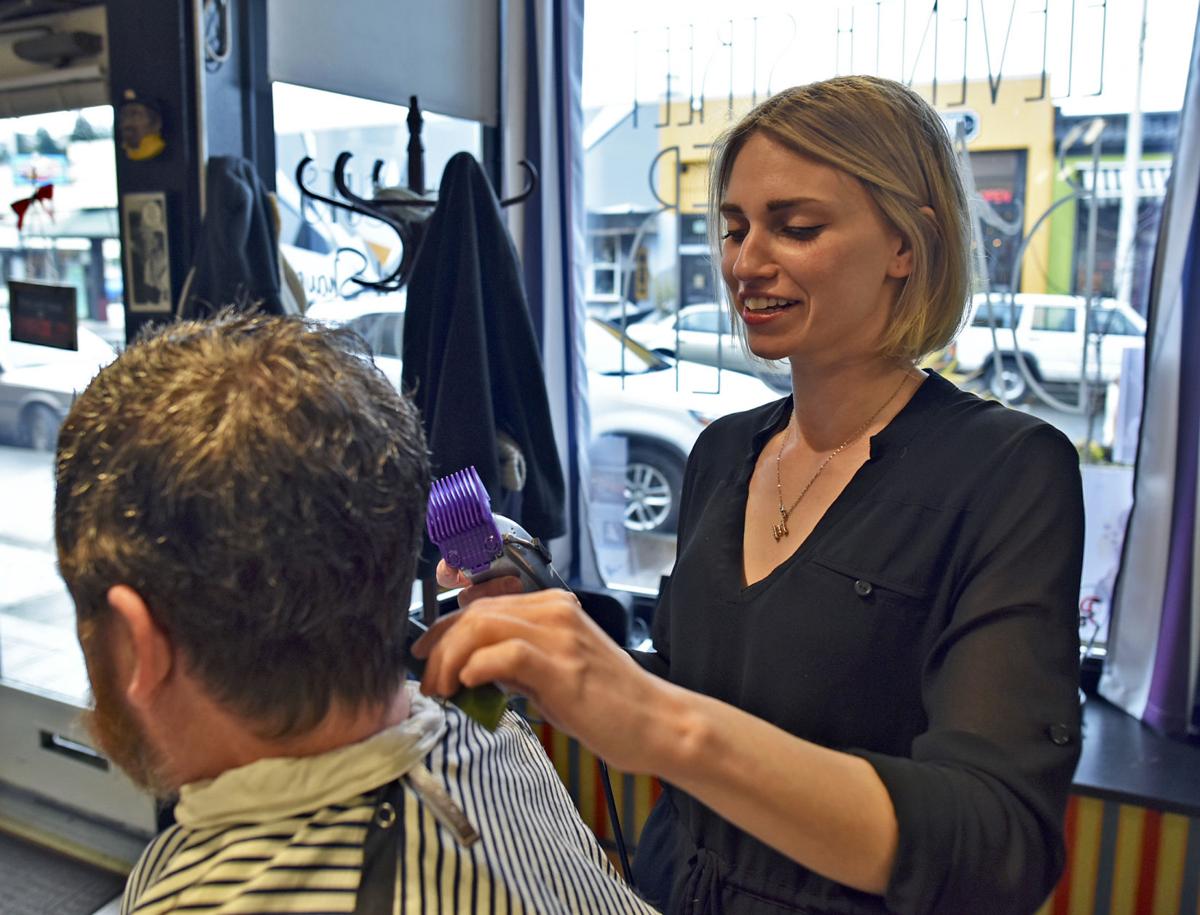 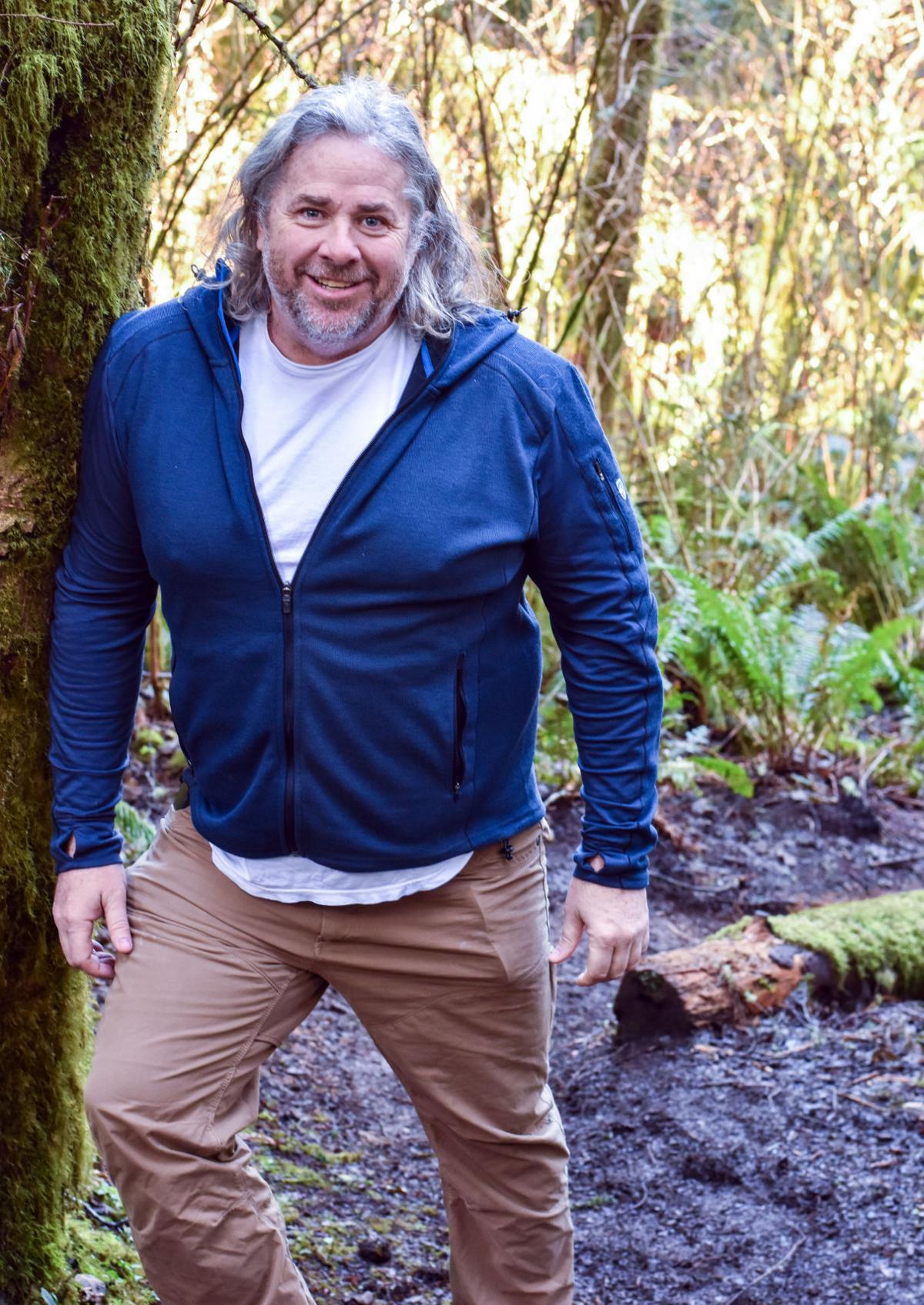 Chris Breitmeyer, president of Clatsop Community College, on the trail to the Astoria Column. 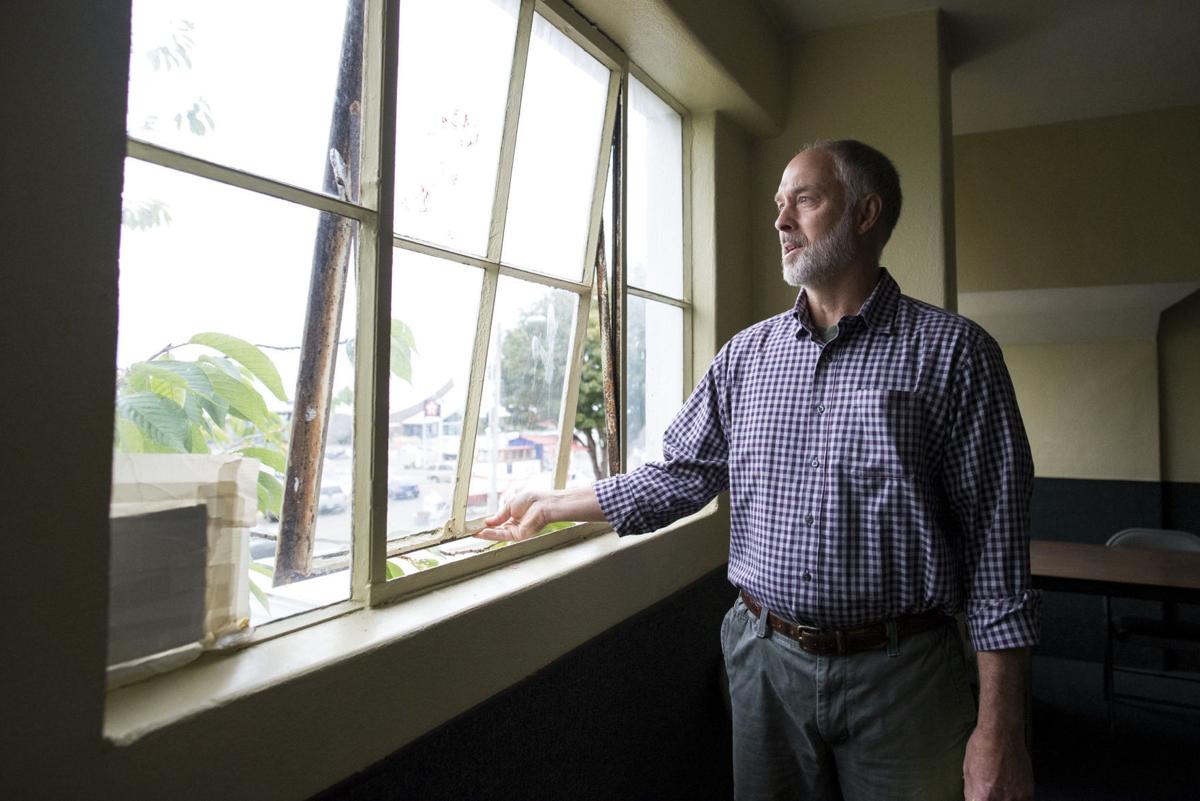 Waves crash over the South Jetty at Fort Stevens State Park as people take to the observation tower to watch a storm in winter 2018.

Astoria artist Sally Lackaff works on the illustrations for a children's book in her Astoria studio.

Chris Breitmeyer, president of Clatsop Community College, on the trail to the Astoria Column.

Just because the weather isn’t welcoming doesn’t mean there aren’t plenty of fun and interesting things to do when the days are short and the waves are whipping up a frenzy. Some coastal residents actually prefer these darker months as there are no lines, no traffic, the parking is ample and the bad weather can force one inside to work on indoor activities, home repairs and art projects.

Speaking of, a spell of torrential rain can be just the thing an artist needs to concentrate on a project with no other distractions. The historic Sou’wester Lodge in Seaview, Washington, offers an artist residency program, which is a reduced rate on a weekly stay. While the program is available year-round, you’ll get the most bang for your buck during the offseason. Use one of their vintage trailers or stay in the lodge. Get the final draft of that novel done when you’re not relaxing in their Finnish sauna. Applications for the residency are available on their website: souwesterlodge.com.

While the weather can be averse to some, others chase it, looking to get a glimpse of the water and the clouds churning into a single thing. When the jetties get too dangerous and elemental, it’s better to do your storm watching from a cozy, oceanfront room. From Long Beach’s Adrift Hotel + Spa to Cannon Beach’s Stephanie Inn, and many in between, there are plenty of places to watch the violent Pacific smack the land. Both places offer many packages to enhance your stay, including the Adrift’s clam digging addition.

And if seafood is your thing, the fall and winter are often the best times of year to snake up a pot of Dungeness crab. From late October through December, Grant’s Outdoor Adventures takes six-person boatloads out of Hammond, near Astoria, at $110 a head.

From the indoors to the outdoors, the coast still offers a lot during the offseason, including arcades and drop-in yoga classes. Our Coast Magazine reached out to some locals to see how they spend their dreary yearly.

Sally Lackoff is a visual artist and author who has lived in Cannon Beach and then Astoria for many years. Her latest children’s book, “Sarah’s Circus,” is available at most coastal bookstores.

“Winter weather encourages me to hole up in my studio, with a heater at my feet, and sink deeply into the illustrative project of the moment, with fewer distractions from garden and sunshine to keep me from deadlines,” she said in an email. “Running from gallery to gallery with a reusable cup in hand during Second Saturday ArtWalk is always a fun way to up the spirits, too!”

Lackaff is also an employee of the Cannery Pier Hotel, which is built upon pilings atop the Columbia River in Astoria. “(It) affords me extraordinary views of the river and the activity on/in it; wildlife and wild lives," she wrote. "All day I, my co-workers, and any guests present get to revel in bald eagles scavenging the mudflats or perched ominously on pilings; the busy antics of the myriad waterfowl that winter on our waters; and the close-up travels of marine traffic just off our terrace. When the winds get heavy I thrill to our expandable glass windows which bulge inward toward the front desk where I stand, anticipating the big gusts.”

Sarah Jane Bardy, owner of Coast Weekend Readers' Choice award-winning Eleventh Street Barber, knows the raw power the weather can produce on the coast. “Nothing compares to the storm of 2007,” Bardy wrote. “I’d just moved up here that fall. I remember watching my greenhouse roof take flight. It was like something out of the 'Wizard of Oz.'”

Bardy also is a commissioner on Astoria’s Design Review Committee, which aims to keep Astoria’s development projects authentic to the town’s historic, architectural roots. “One of my favorite things in the winter is sitting inside looking out. Coffee Girl on Pier 39 has a great view of the river. There’s something really magical about the way the fog sits on the river in the wintertime.”

As a barber, Bardy probably hears more stories than anyone else in Astoria. “I’ve heard from a few clients that will hike Saddle Mountain every year on New Year’s Day. Even wilder than that, one of our clients does a Polar Plunge in the ocean every year on New Year’s. It sounds like punishment to me, but hats off and kudos to anyone who wants to!”

Clatsop Community College President Chris Breitmeyer moved to Astoria two years ago from outside of St. Louis. “My first winter here was a record breaker in terms of precipitation,” Breitmeyer wrote. “It was a lot, but I expected that and was prepared. What I didn’t expect is the spirit of community that Astorians exhibit. It’s present all year round but particularly evident in the dark wet winter months.”

And of course, when it’s wet is a good time to wet one’s whistle. “When the rains start in the late fall in Astoria it’s a good time to go to Fort George, Reach Break, Buoy or any local bar and hang out and chat with whomever you see. You are bound to run into someone you know. Often you meet someone new who is visiting and some of those are great conversations.”

Breitmeyer, who has a background as a biology professor, isn’t afraid of a little rain. “What I like to do most is to get out and hike. Hiking in the rain or cold is among of my favorite things,” he said. “Some of my favorites are down towards Cannon Beach or the around the Lewis and Clark sites. There usually aren’t too many folks out on the trails and it allows you to feel a bit closer to the forest.”

Former Astoria Mayor, Arline LaMear, is also an avid hiker. As a longtime member of the Angora Hiking Club, a local club started in 1920 and devoted to exploring the beauties of the great Northwest, LaMear remembers when the club used to plan winter hiking activities, but they no longer do as the hikes kept getting rained out. “It’s kind of frustrating in the winter to plan a hike and go down to meet everybody and nobody shows up because of the weather,” she said.

The club is active typically between March and October. “If I’m feeling particularly adventurous, I’ll take off and do a Volkswalk because you know that there’s going to be people always doing them,” LaMear said. “Volkswalkers seem to keep walking no matter what.”

Volkswalking, or the “People’s Walk,” began in Germany as a public health movement and is now an international organization. The North Coast’s local chapter is named the Turnaround Trekkers and you can find about upcoming events on their website turnaroundtrekkers.org.

With more than 30 years in the Coast Guard, Astoria Mayor Bruce Jones knows a bit about the best places to watch a squall. “When offshore storms have generated big, over-15-foot seas, the observation platform at the South Jetty at Fort Stevens provides great views of dramatic, crashing breakers. Cape Disappointment State Park is another great storm and big sea-watching location,” he wrote.

Jones also piloted a helicopter for the Columbia River Bar Pilots for two and a half years after retiring from the Coast Guard. His favorite things to do in winter? “Put on a good raincoat and go to any of the Fort Stevens or Seaside beach access points and enjoy having miles of beautiful, wind-swept beach virtually all to myself,” Jones said. “And of course, go razor clamming when the season is open.”

Since 2017, Jones has worked as deputy director of the Columbia River Maritime Museum. He wants everyone to remember that “fog, mist, rain and fast-moving clouds frame our city just as beautifully as the sun.”

While Finnish saunas are great, I really believe that an infrared SAUNA is the best solution for every season. A sauna is used for detoxification and it lowers the risk of heart attack, and yes, you can finish your novel in one. I found a 2 person sauna the most appropriate for my price point, personally.