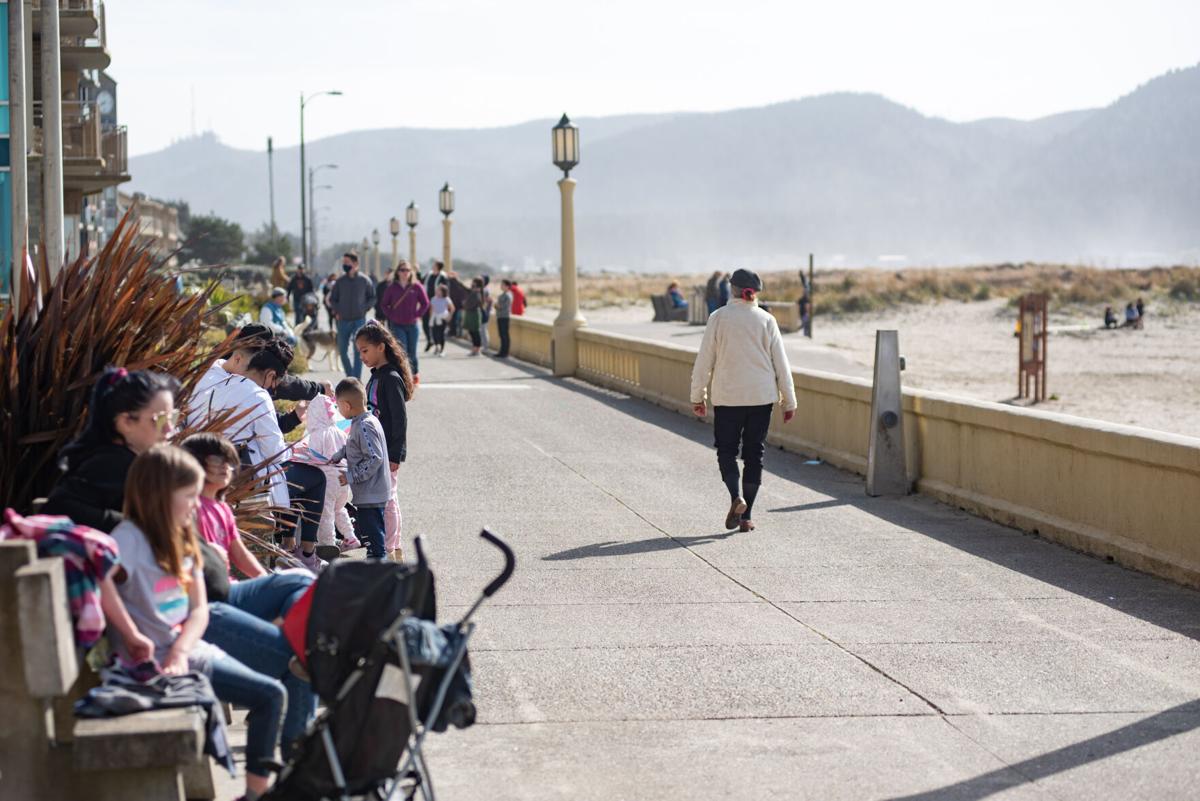 Tourists walk and sit along the Prom. 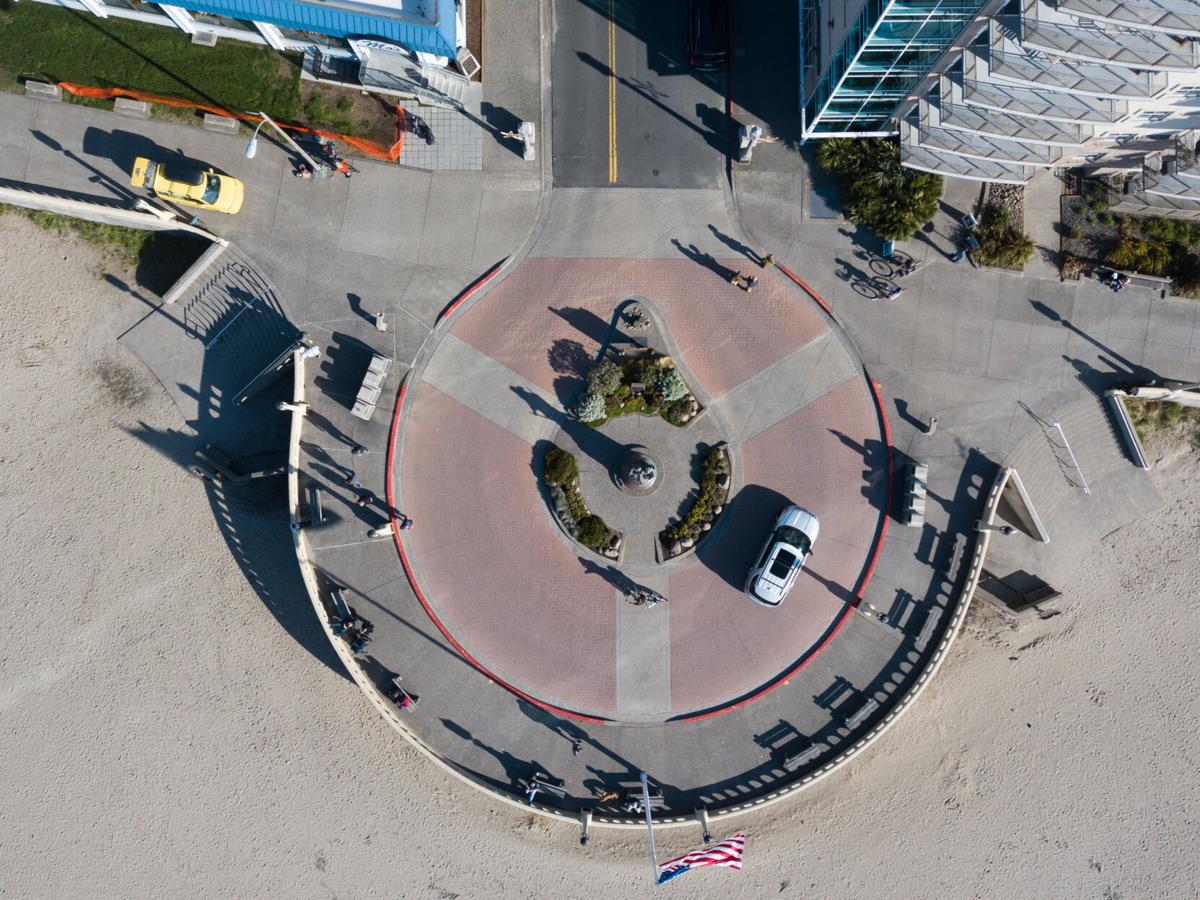 The Prom features The Turnaround where cars can drive and take in views of the Pacific Ocean. 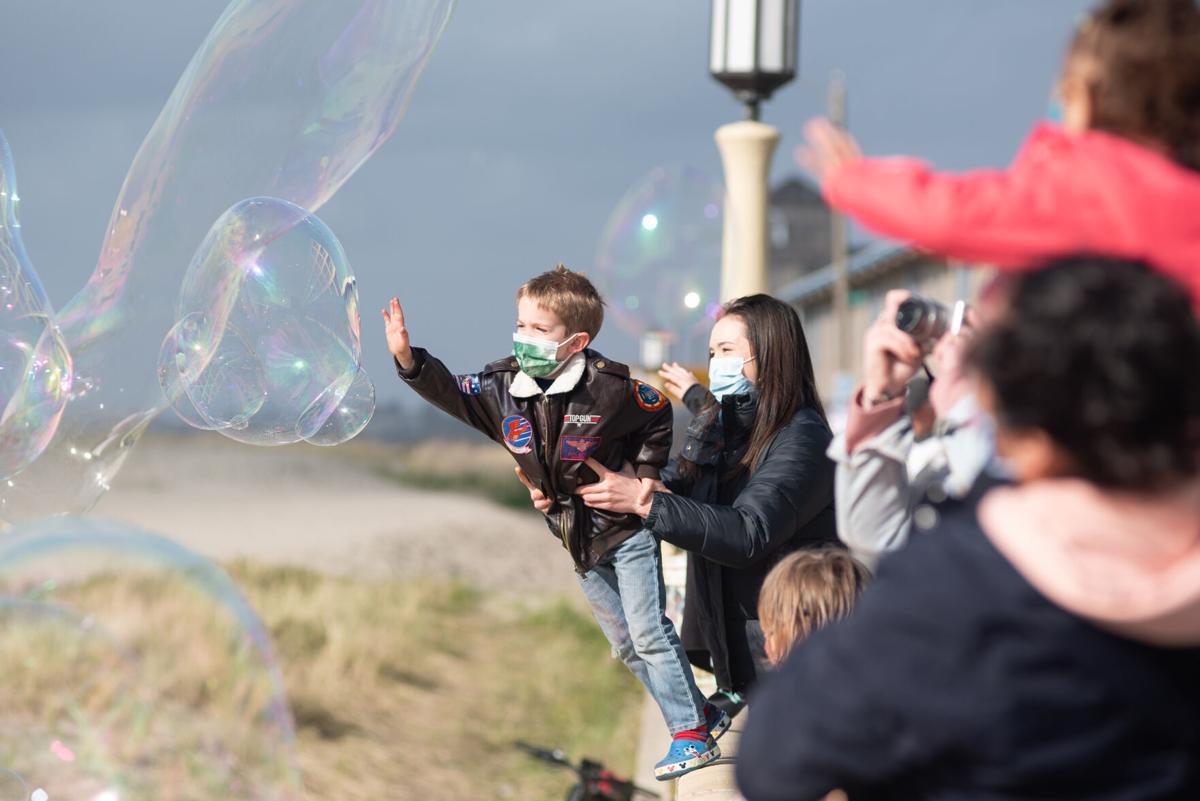 Teddy Tully reaches to pop a massive bubble with the help of his sister, Grace, on the Prom in Seaside. 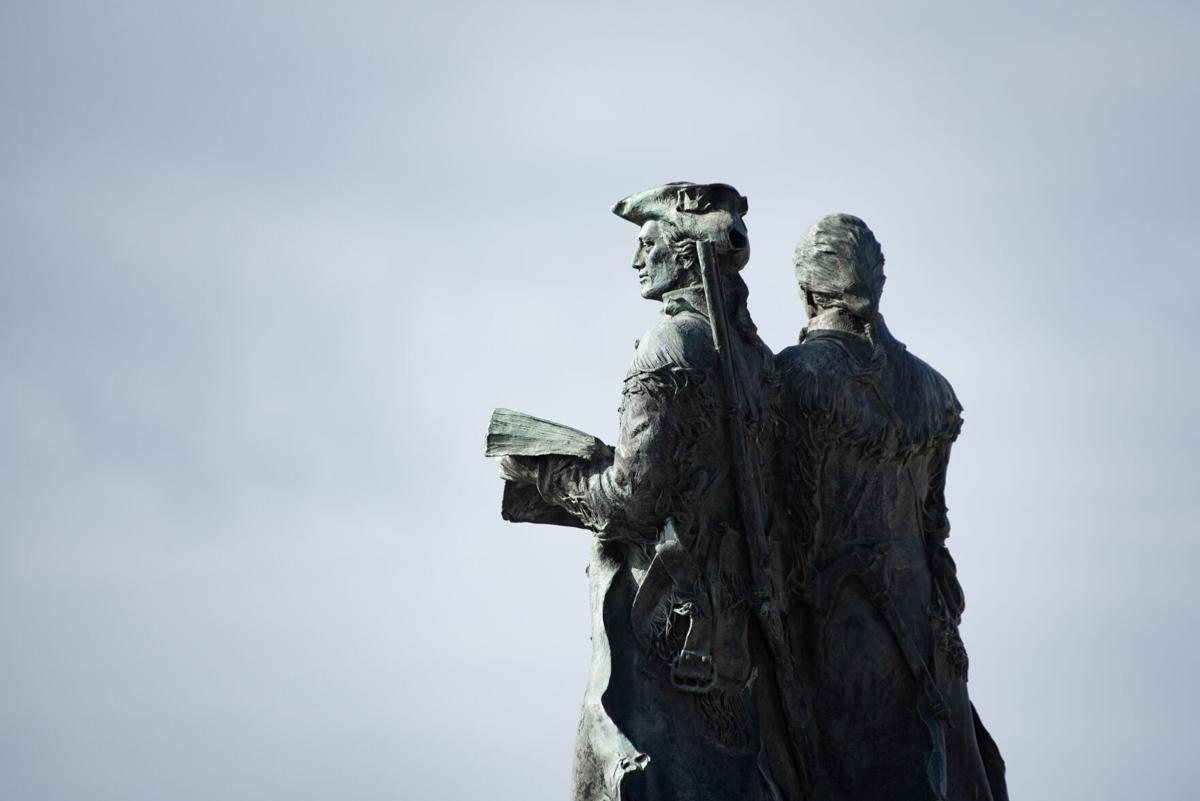 The Lewis and Clark statue on the Prom commemorates the Corps of Discovery's journey to to the Pacific Northwest.

“It’s almost hard to talk about because it’s such a big thing,” said Joshua Heineman, director of tourism market for Seaside’s Visitors Bureau. “The process of building something like the Prom has so many threads to pull, as far as stories.”

First, in 1904, there was a pier, which stretched from the Moore Hotel (where the Shilo Inn now stands). In 1908, wooden planks were laid down in an 8,040-foot-long boardwalk. After ocean storms destroyed the pier in 1914, a turnaround was built in its place. In 1920, the city’s engineer, LC Rodgers, used horse teams to replace the wooden boardwalk and turnaround with concrete. Finally, the Prom became a concrete walkway 1.5 miles long from Avenue U to 12th Avenue.

But much of the information about the Prom remains a mystery. Even the planners can’t agree on the date of the Prom’s official dedication.

“It was Aug. 8, 1921,” said Tita Montero, a city councilor and vice president of the Seaside Museum & Historical Society’s board, pointing to a story in The Astorian of Aug. 11, 1921. Headlines invited readers to “Meet You at the Prom.”

“I think it was Aug. 7,” said Steve Wright, also a city councilor and the museum’s board president, who pointed to the dedication plaque.

“It was actually the whole weekend,” Montero said.

Why is the Prom, apparently, the only one of its kind in the Northwest?Did Alexandre Gilbert, the real estate developer for whom the Gilbert District is named after, donate land for it?

Why did then Seaside Mayor Erle Nolton Hurd push for it so much that he was willing to put up with the Promenade being called “Hurd’s folly”?

At the time, the beach was rocky, and the boardwalk may have enabled tourists to get a closer view of the ocean, which was only about 100 feet away. Another purpose of the Promenade, built to be several feet high, was as a seawall, protecting adjacent cottages. Today’s 800-foot-wide sandy beach is a result of the north and south jetties built at the mouth of the Columbia River.

The group hopes visitors will come to Seaside to help celebrate the Prom’s 100th birthday, like they did 100 years ago when the Prom was dedicated with bands and dignitaries, including Oregon’s governor.

“I think part of what we want to do is create that aura,” Wright said. A centennial celebration for the Prom will be held on Aug. 7 with a dedication ceremony and parade.

Attractions near the Prom

Scattered along the Prom are some of Seaside’s other historical spots. The Seaside Aquarium, established in 1937, is located toward the center of the Prom. Just a couple minutes south is the Lewis and Clark statue, which marks the Corps of Discovery’s 1805 to 1806 travels in the area. A few minutes farther south, off Lewis and Clark Way, is the Salt Works. The monument is a life-size replica of a salt cairn the Corps of Discovery used to create salt while they were in Seaside. Visitors can also see wildlife, whales and storms throughout the year.

In May, the Sunset Empire Park and Recreation District celebrated the Prom’s centennial with an all-night 100K relay.

The visitors bureau received a $14,500 grant from Travel Oregon to create a booklet dedicated to the Prom’s centennial.

You can pick up a holographic centennial sticker at the visitors bureau to be entered into the centennial sweepstakes, with prize drawings four times throughout the year.

The yearlong celebration kicked off in the fall with a History & Hops talk by Dale McDowell, the city’s public works director, about the Prom’s construction.

The Prom is an “iconic Oregon experience,” Heineman said. “The fact that it has been there for 100 years, and it has been taken care of and it’s still a central part of the community is remarkable.”