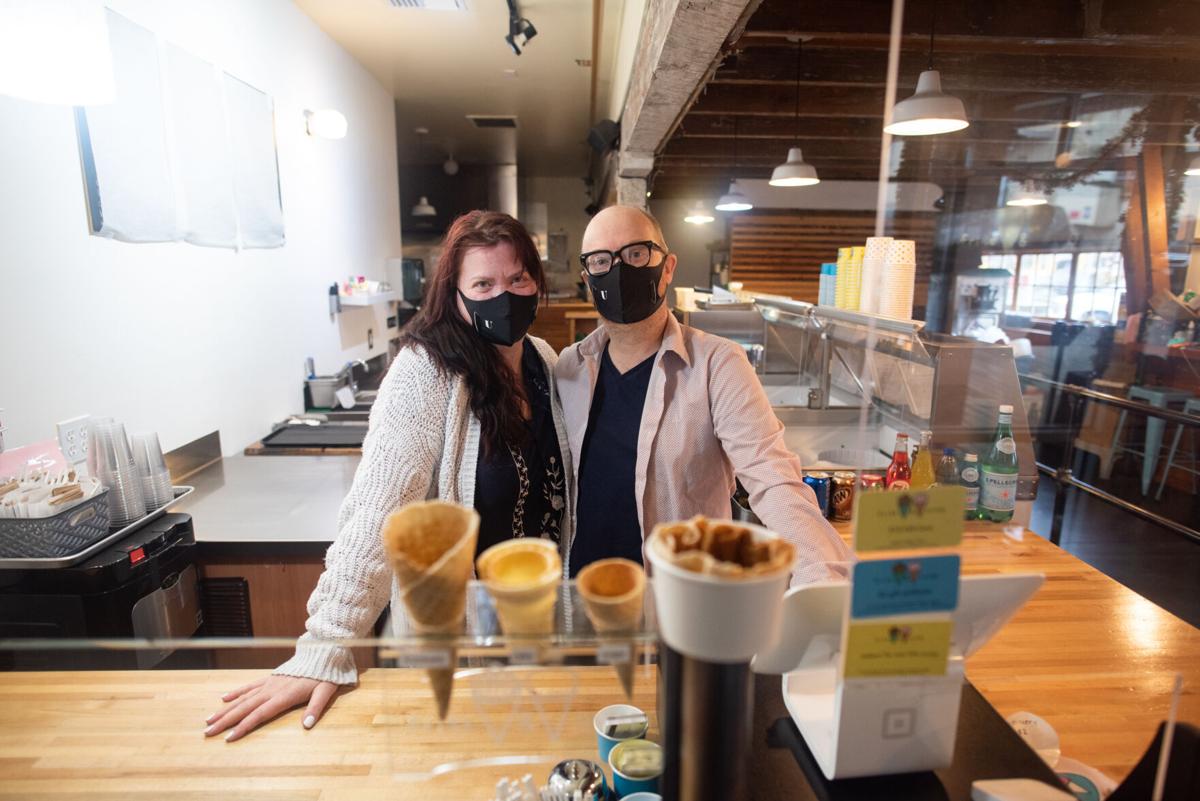 Kevin and Lisa Malcolm are the owners of Frite & Scoop in Astoria. 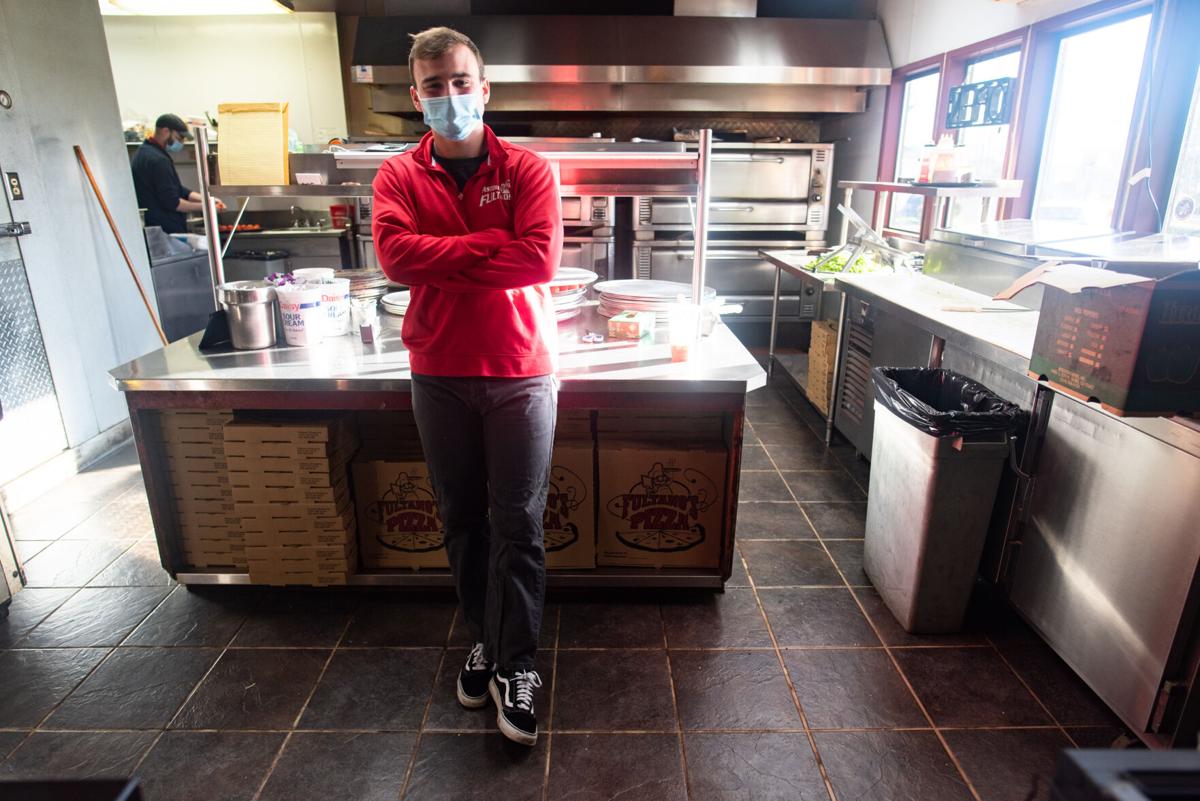 Astoria Fultano’s delivery driver Adam Craig put on a mask and gloves and delivered pizzas to customers around town amid the coronavirus pandemic. 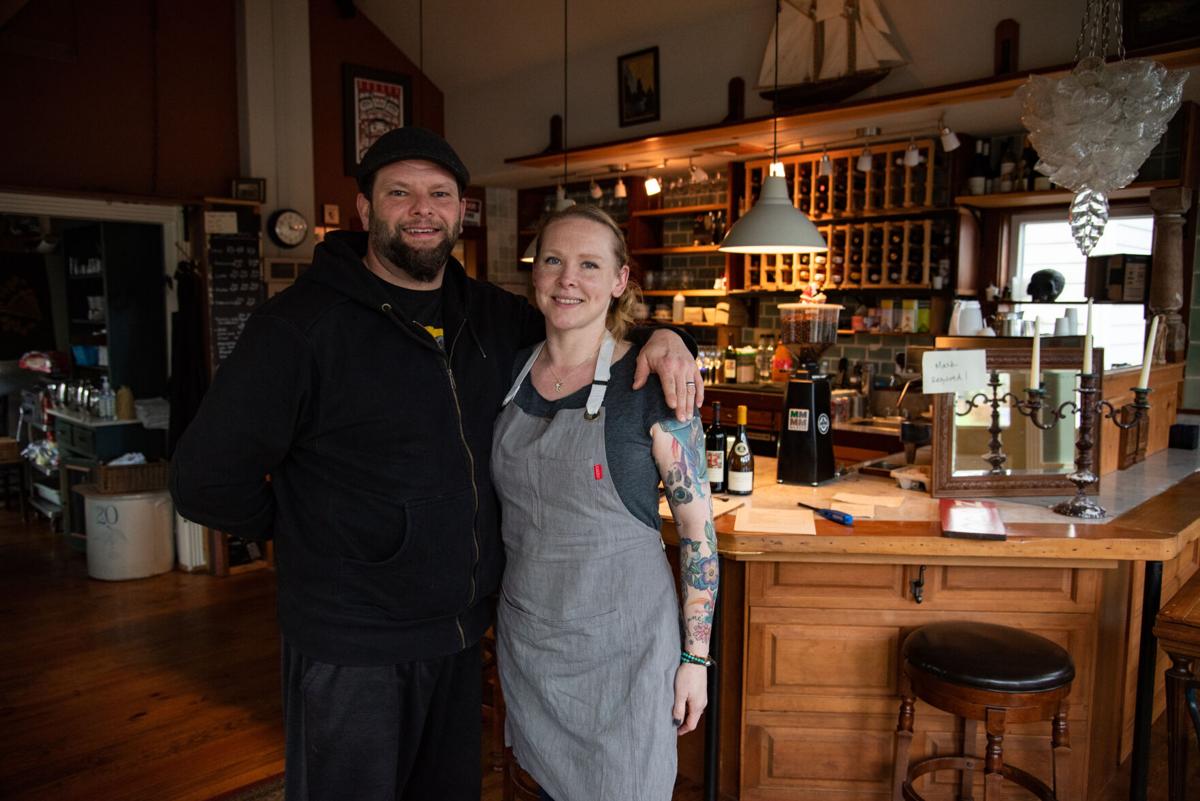 Sean and Crystal Corbin are the owners of Corbins in Cannon Beach. 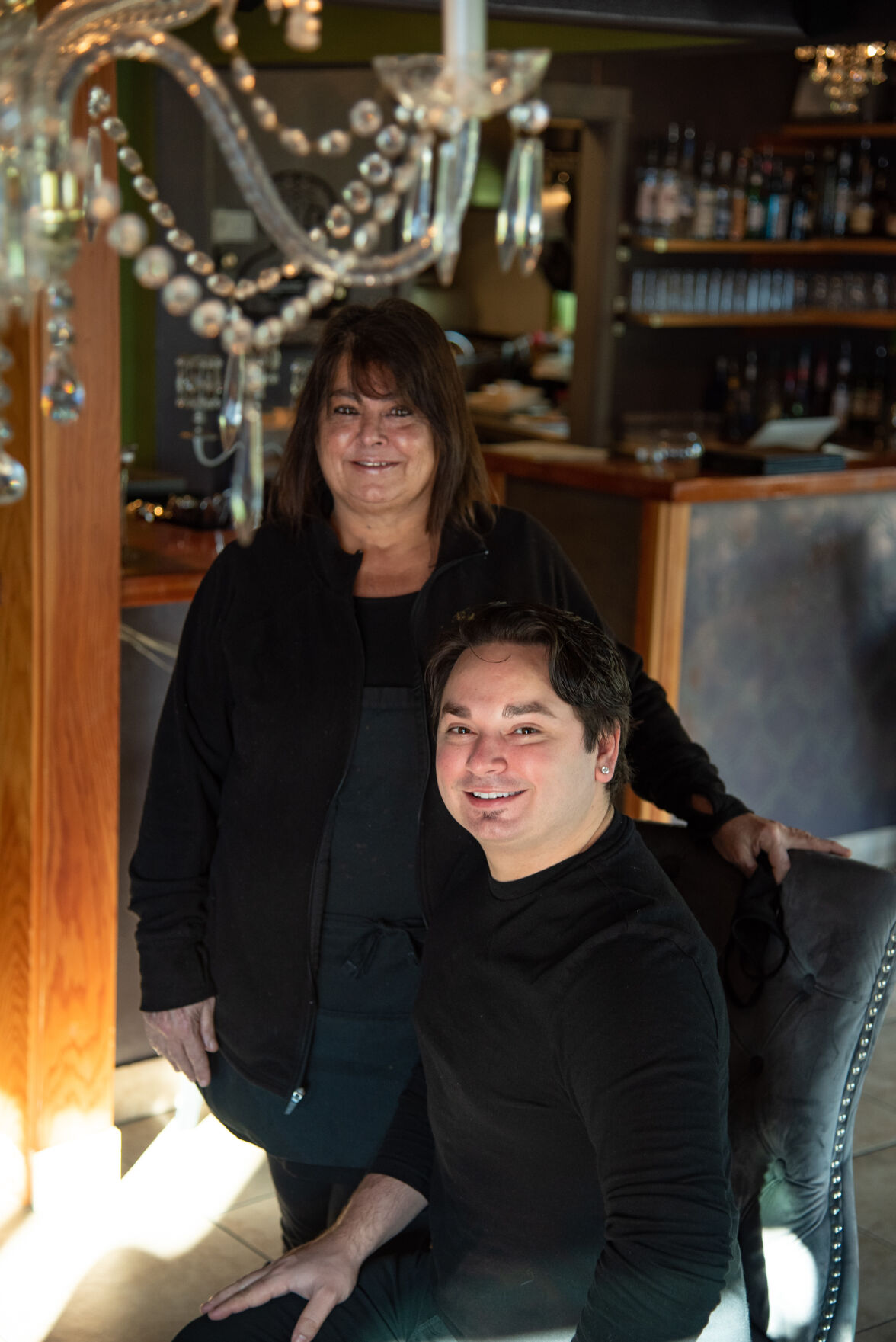 Mother and son duo Lynne and Eisha Hopper are the owners of the Neah-Kah-Nie Bistro in Manzanita. 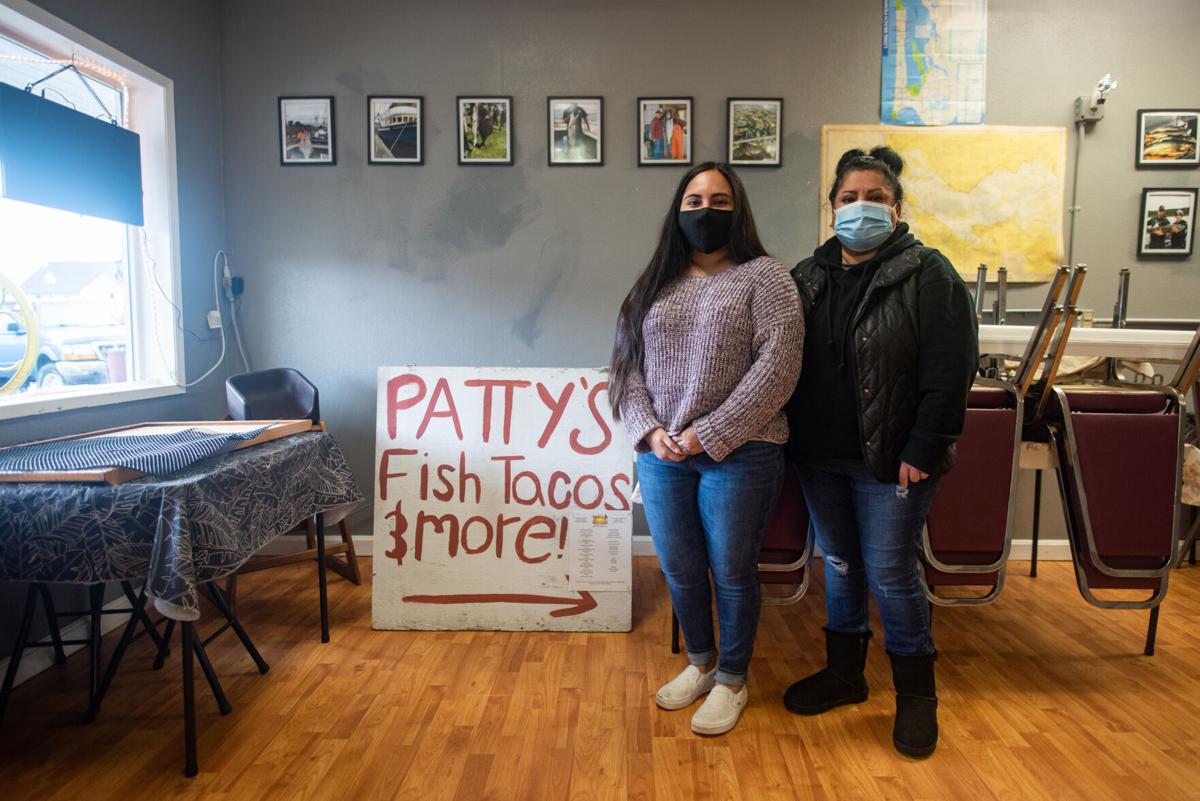 Owner Patty Lopez, right, with her daughter, at Patty's Fish Tacos and More in Ilwaco, Washington. 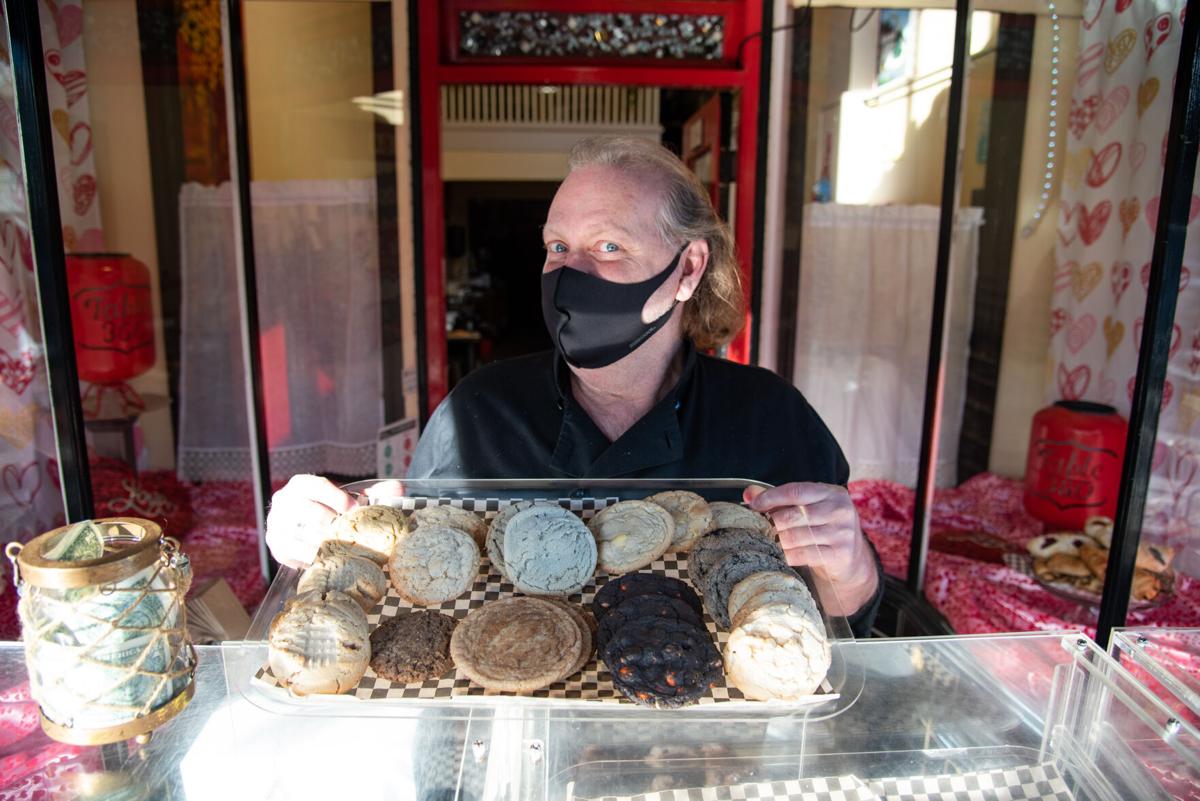 The coronavirus pandemic changed how many restaurants do business on the North Coast. Handling surges of tourists, issues in supply chains and amending menus ill-equipped for takeout are just a few of the obstacles they faced. But eateries forged on. They pivoted to to-go meals and added outdoor seating. Some even created contactless delivery services.

Our Coast talked to restaurateurs from Manzanita to Long Beach, Washington, on what this past year was like and how they adapted.

The one-stop ice cream and french fries shop along the Astoria Riverwalk has always been a popular spot for tourists and locals alike, especially during the summer.

Owners Kevin and Lisa Malcolm rely on a steady stream of tourists during spring break and into the late summer and early fall. But last year, the tourist season was abated in the spring by the coronavirus pandemic, a crucial time for the business.

Frite & Scoop banded together with other local shops — Būsu, Idlewild Biscuits and Bakes, Blue Scorcher Bakery & Cafe and Good to Go — to create a curbside pickup and contactless delivery service in Astoria. Through an online link, anyone could receive fresh hot frites and a pint of creamy ice cream on their doorstep an hour later.

“It was so stressful, because all of a sudden, our business model entirely changed,” Kevin said. “We had to shift our brains, and it was stressful, and it was exhausting.”

As virus cases dipped and restrictions loosened, Frite & Scoop reopened to a more steady flow of tourists in the summer.

“When we were scared of tourists, they all came,” Lisa said. “We needed them to survive but we were scared that they were even here. It was a really double-edged sword.”

The ice cream shop rehired their usual batch of local teenagers and faced the hordes of tourists looking for a reprieve from a stressful few months. With that came a summer of stressful customer service.

“The teenagers we have are amazing,” Lisa said. “We had 16-year-olds telling grown people, ‘Hi, welcome! Can you please put your mask over your nose, please?’”

Fultano’s, like most pizza parlors, had the structure going into the pandemic for a to-go and delivery-only business.

At the beginning, Fultano’s had to immediately shut down their popular buffet line and stop indoor seating. They relied heavily on carryout and delivery. “It’s kind of just like an internal machine,” delivery driver Adam Craig said. “Here, we can do our stuff, we have our pickups, and then we have our deliveries without having to come out here to take care of our customers.”

Despite their delivery model, Fultano’s took a hit along with other restaurants on the North Coast. As summer hit, they got busier and orders became a bit more chaotic. “The first couple of weeks, we dropped significantly and were in panic mode,” owner Mark Cary said. “Now, all of a sudden, it just goes ‘Bam!’ and then it dies.”

As the months drew on the restaurant faced issues with the supply chain as distributors and processors had to shut down. Cary had to rely on different suppliers to get what his restaurant needed, like lettuce and pepperoni. “It’s kind of embarrassing if a pizza parlor runs out of pepperoni,” Cary said.

Through it all, Cary kept employees working and the business running. “We didn’t have to reinvent the wheel,” he said.

In a normal year, Neah-Kah-Nie Bistro is the perfect spot to stop for a nice, slow, gourmet meal. You could start with some oyster shooters or a traditional wedge salad and follow it up with a ribeye with truffle herb compound butter or a platter of fresh-caught cod. As you go through the courses, you might sip a glass of chardonnay or a lavender lemon drop.

The restaurant was never designed to be a to-go establishment. When the pandemic hit, mother and son duo Lynne and Eisha Hopper had to adapt, and quickly. “At the beginning especially, it was not gonna be closed, then you’re going to be closed. We had never done to-go food,” Eisha said.

Eisha, who runs the business operations side of the restaurant, popped out a screen in one of the windows of the restaurant to serve as a to-go and pickup window. Lynne, the restaurant’s only cook, worked hard in the kitchen, trying to figure out how to balance making multiple meals at once. Usually, she works in courses and has time between each dish. “It’s about being adaptive to the process, even though it’s a drain,” Eisha said. “I mean, emotionally, physically, mentally, am I spent? Yes.”

The bistro never closed, never laid anyone off and initially didn’t take any of the government assistance because they still managed to be self-sustaining through the summer.

Just before New Year’s, the pair installed a tent with heating lamps and fire pits to continue serving customers. With virus case counts fluctuating and restaurants opening and closing to dine-in service, Eisha and Lynne wanted to keep serving people. “It’s nice to walk out onto the patio and every night hear laughs,” Eisha said.

For the past 10 years, Sean, Crystal and Shane Corbin served dinners at the Irish Table in Cannon Beach. In January 2020, they planned on moving to the corner of Beaver and Fir streets to expand their restaurant and offer more meals. The onset of the pandemic upended their plans.

When restrictions went into place, the Corbins had to reevaluate what they could serve and how to manage a to-go only restaurant. “It’s $30 bucks an entree. Who’s going to pay $30 bucks for a box of fish for one person?” Sean said. “We’re fine dining, you’re paying for the experience.”

They instead opened the restaurant as The Table and offered more comfort and to-go foods like fluffy French beignets and hearty Russian piroshkis. They added lunch specials and served espresso. “We were so used to dining service at night, this was so different for us,” Sean said. “We had to keep juggling stuff.”

The new model worked during the heavy traffic that comes with the tourist season. But when the weather turned and tourists slowed, they yet again reevaluated their business. With another name change to Corbins, the restaurant began offering dinner service — as they once did at the Irish Table — to a limited number of customers.

It’s been three years since Patty Lopez first opened her restaurant and became her own boss. After more than a decade working at Ole Bob’s Seafood Market in Ilwaco, Washington, she took her skills and fish tacos to her own kitchen with Patty’s Fish Tacos and More.

In the years since opening, Lopez faced many challenges, from running the restaurant alone when her daughter was away at school to cooking outdoors for months before she had the proper kitchen equipment. The closures and restrictions that came with the pandemic were just another challenge she pushed through. “I don’t give up,” she said. She attributes her work ethic and perseverance to her parents who raised her and her many siblings and kept working into their 80s.

From the start of the pandemic, Lopez couldn’t seat anyone inside her small shop because it wasn’t possible to spread the tables 6 feet apart. She installed some benches outside and has continued to welcome customers. “It’s been a bit slow but I’m managing to open every day,” she said. “I haven’t closed down since starting.” Lopez continued to pay her rent and bills without relying on government assistance and loans.

As summer brought more tourists to the Long Beach Peninsula, business increased significantly as mostly people from the Northwest sought out her fish tacos and chimichangas. She said she most misses serving and interacting with people in her shop from all over the country and, sometimes, the world.

When indoor dining first shut down just before St. Patrick’s Day in 2020, Taz Davis set up a table, tent and display case for baked goods in the doorway of Table 360 Bakery & Bistro in Astoria. His goal: to catch customers as they wandered through downtown.

“Honestly when I first did it, I’m like, ‘Well, we do the market. This is only going to last a couple weeks,’” Davis said.

A year later, he still serves fresh baked cookies, decorated focaccia and fluffy croissants in the blasting wind, sideways rain and occasional sunshine to his regulars and tourists. “Sometimes I think people stop just because they feel bad,” Davis said with a laugh.

As the pandemic endured, Davis continued to find ways to spread joy. The bakery sent boxes of cookies to Columbia Memorial Hospital for health care workers and packages to workers quarantined after the outbreak at Bornstein Seafoods. They even dropped off bread to a few regular customers so they could get their pastry fix without leaving their homes. “Sometimes something as simple as a cookie just makes somebody’s day,” Davis said.

Davis said he misses having people eating in the shop and being able to serve a full menu but is hopeful that things will return to normal. “I still have one St. Patrick’s Day decoration on the back wall that I’m not taking down until we get back to normal,” he said.