You have permission to edit this article.
Edit
Our Publications
Home
Do See
Eat Drink
History Heritage
Live Stay
Photos
Share This
1 of 11 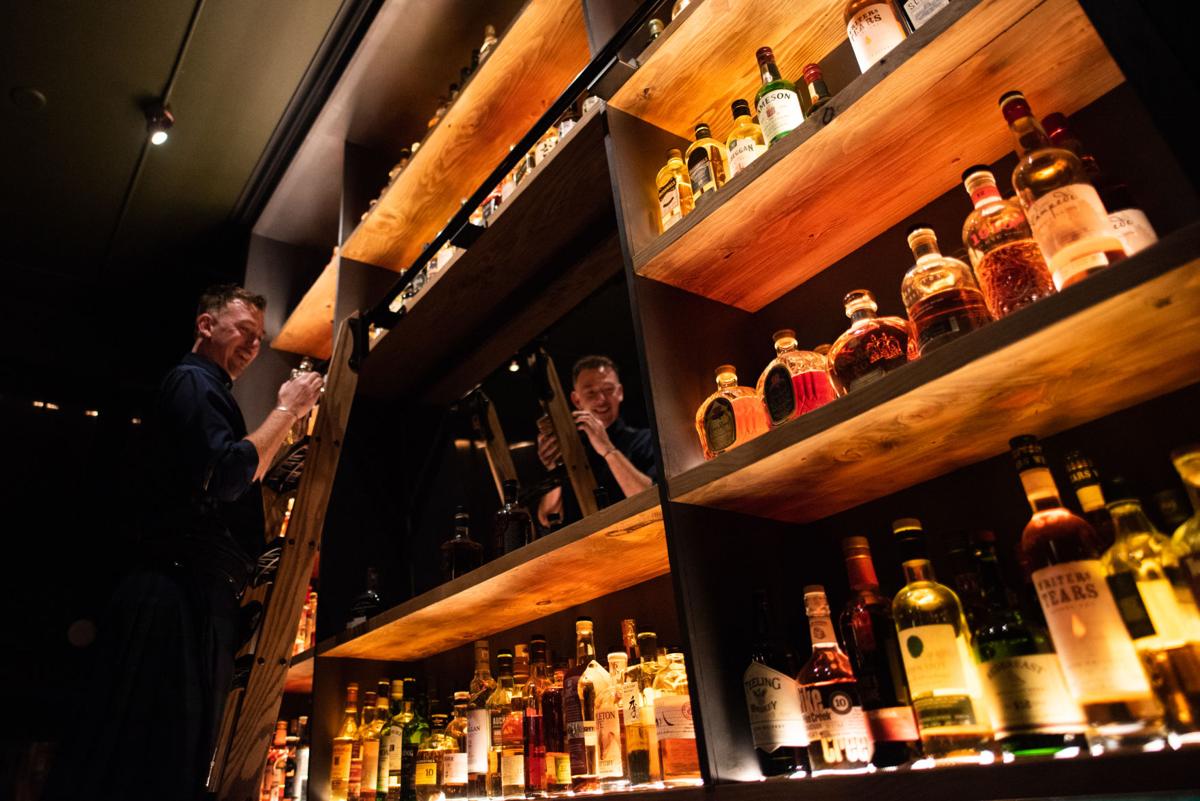 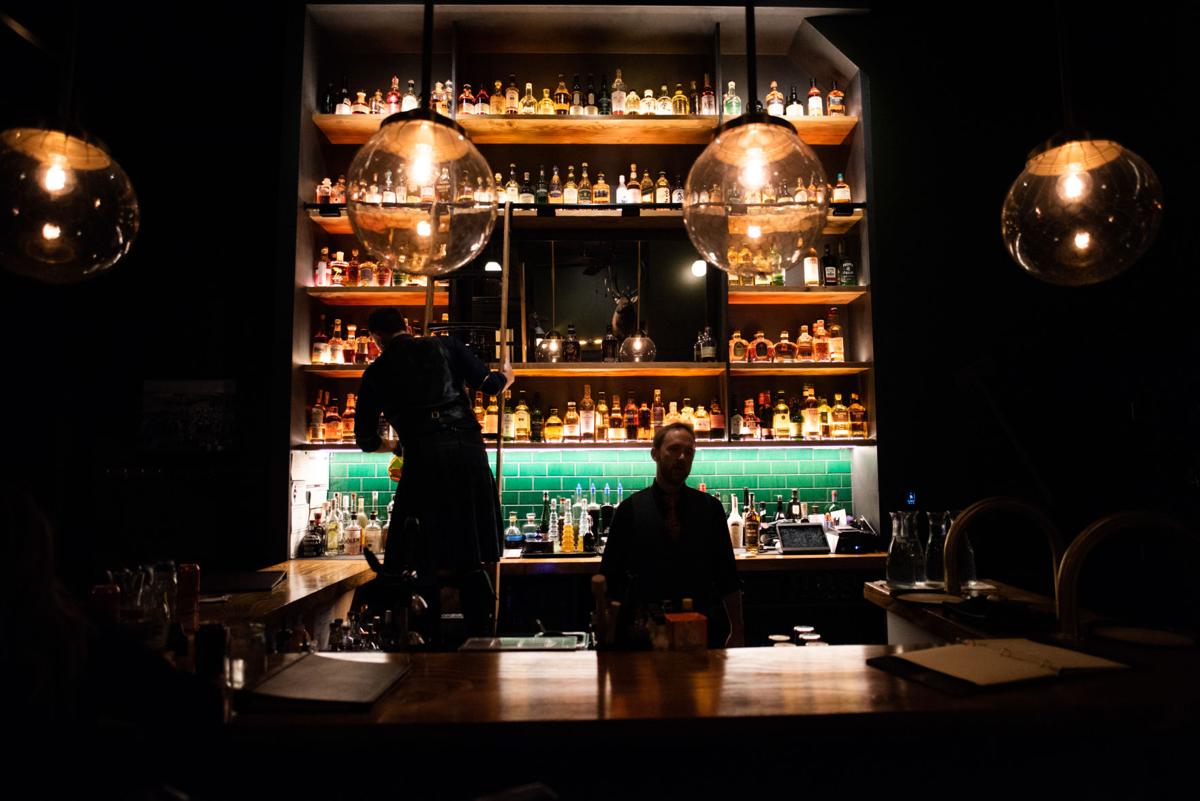 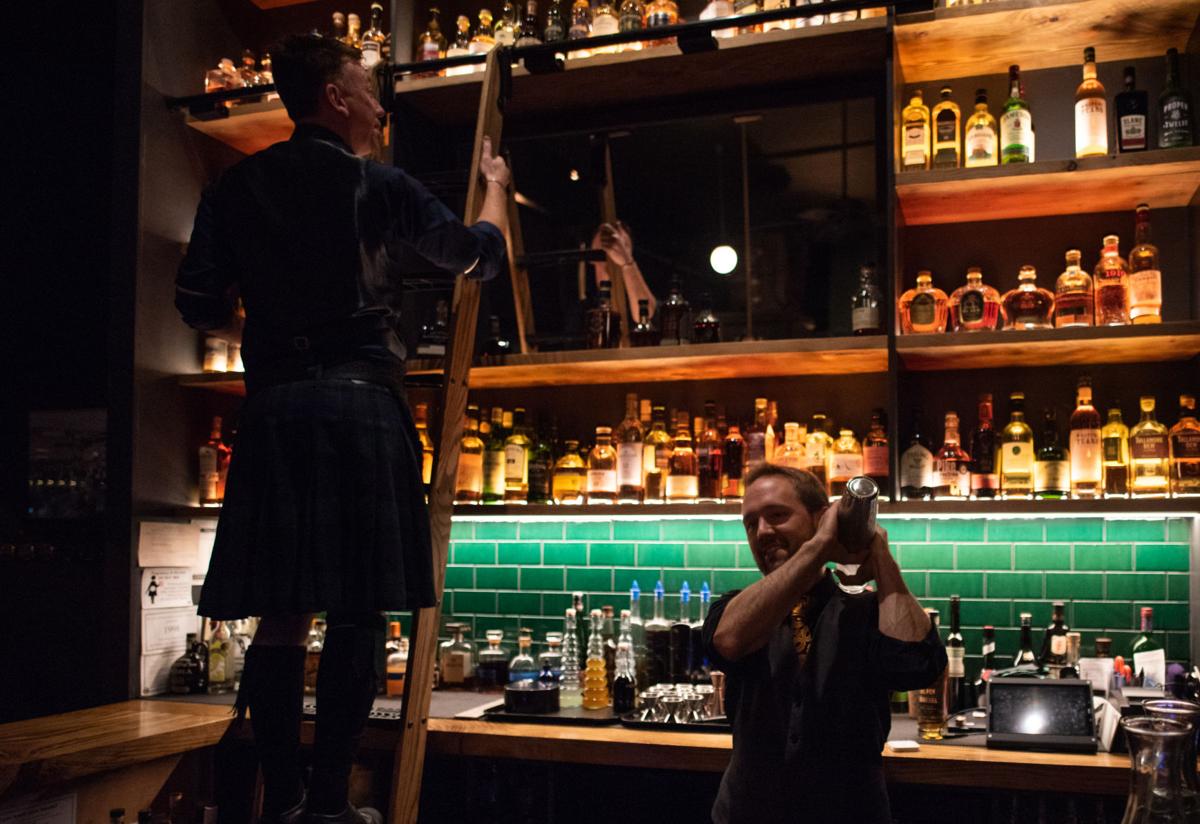 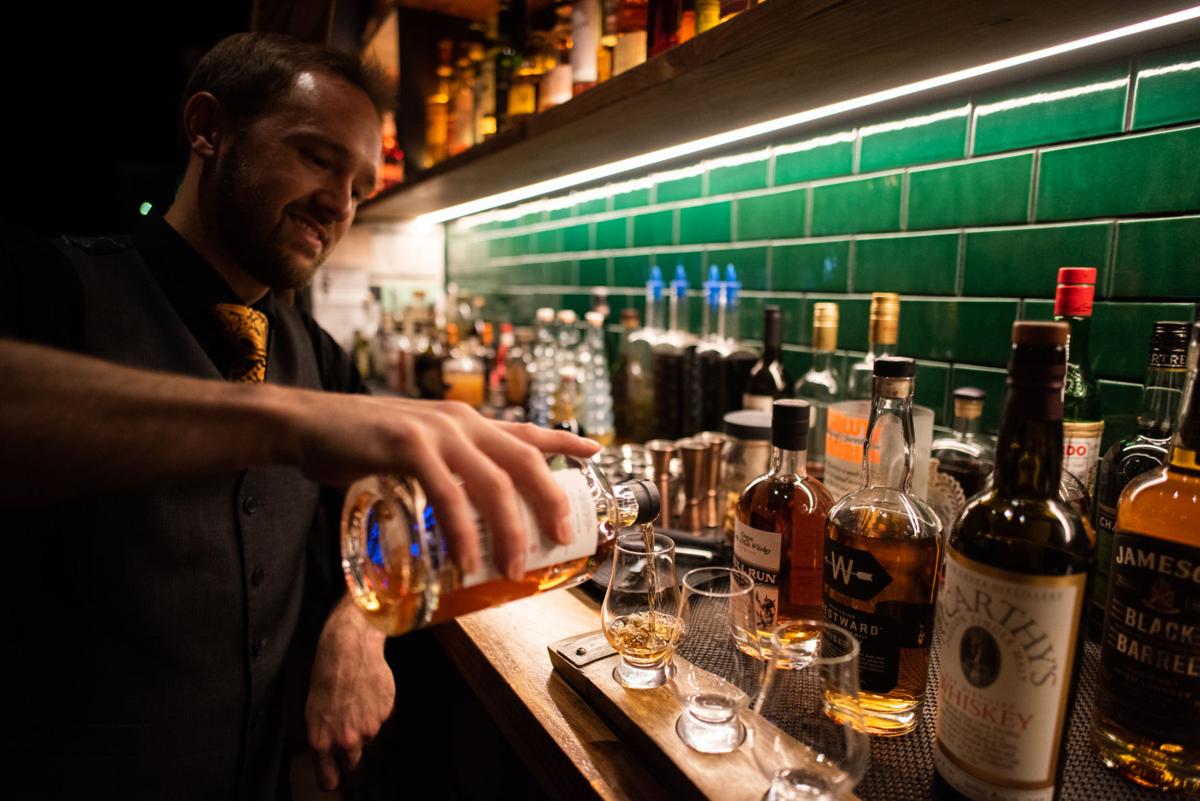 Cory Teubner pours a flight of whiskey at Blaylock’s Whiskey Bar in Astoria. 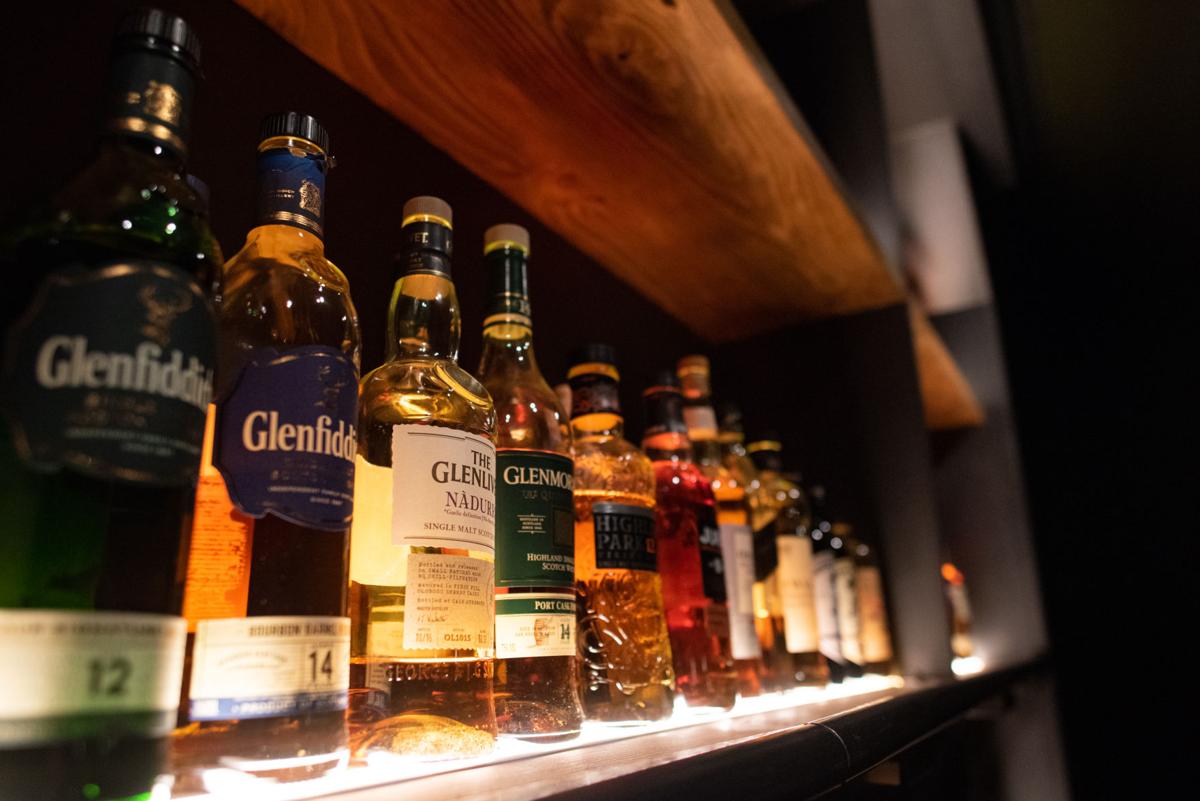 Whiskeys sit on the illuminated shelf behind the bar at Blaylock’s Whiskey Bar in Astoria. 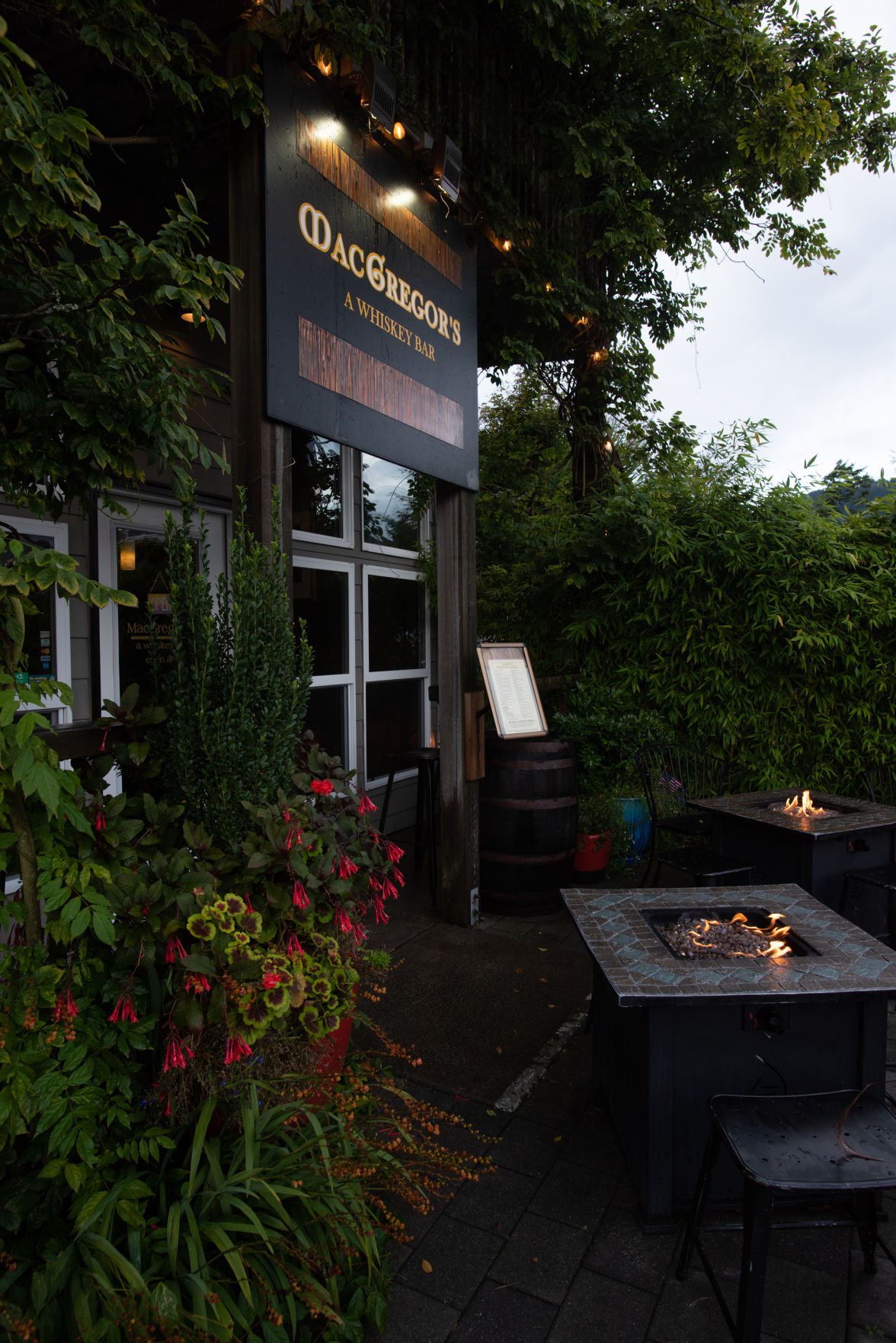 MacGregor’s Whiskey Bar sits in a quiet corner off of Laneda Avenue in Manzanita. 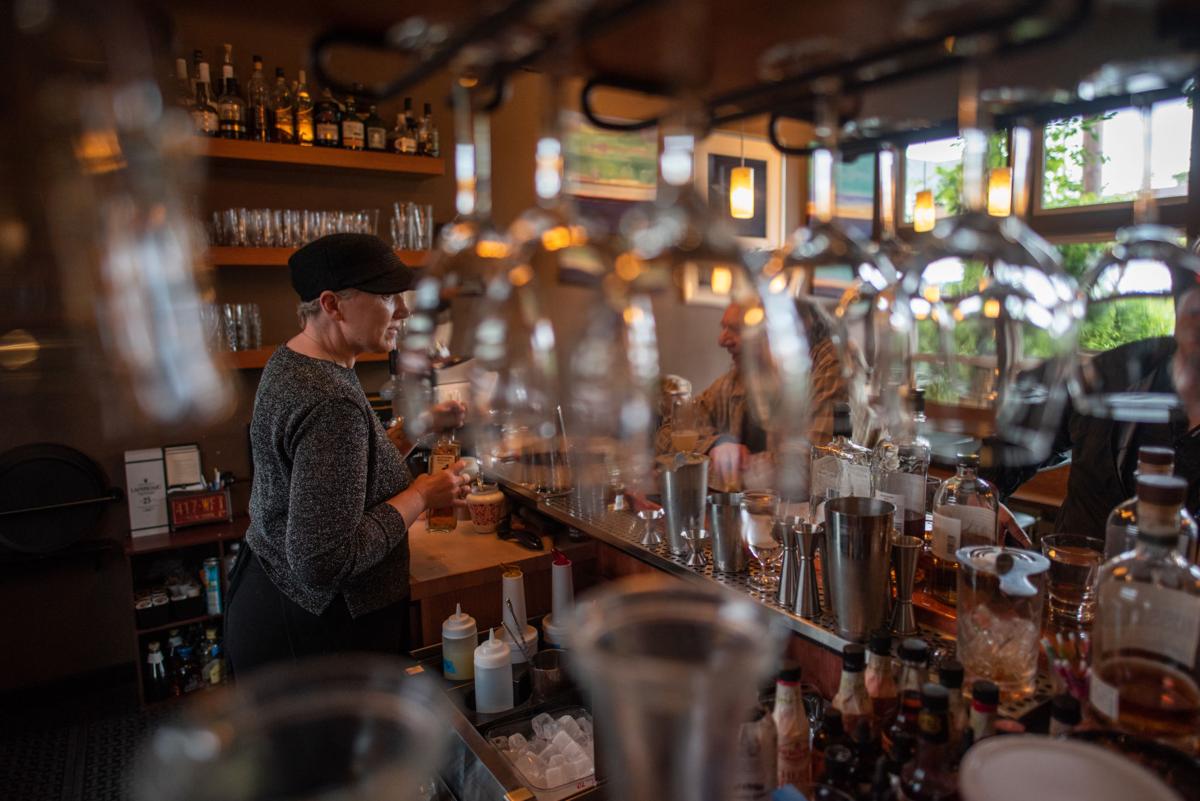 Manager Lynn Kyriss talks with a customer while making a drink at MacGregor’s Whiskey Bar in Manzanita. 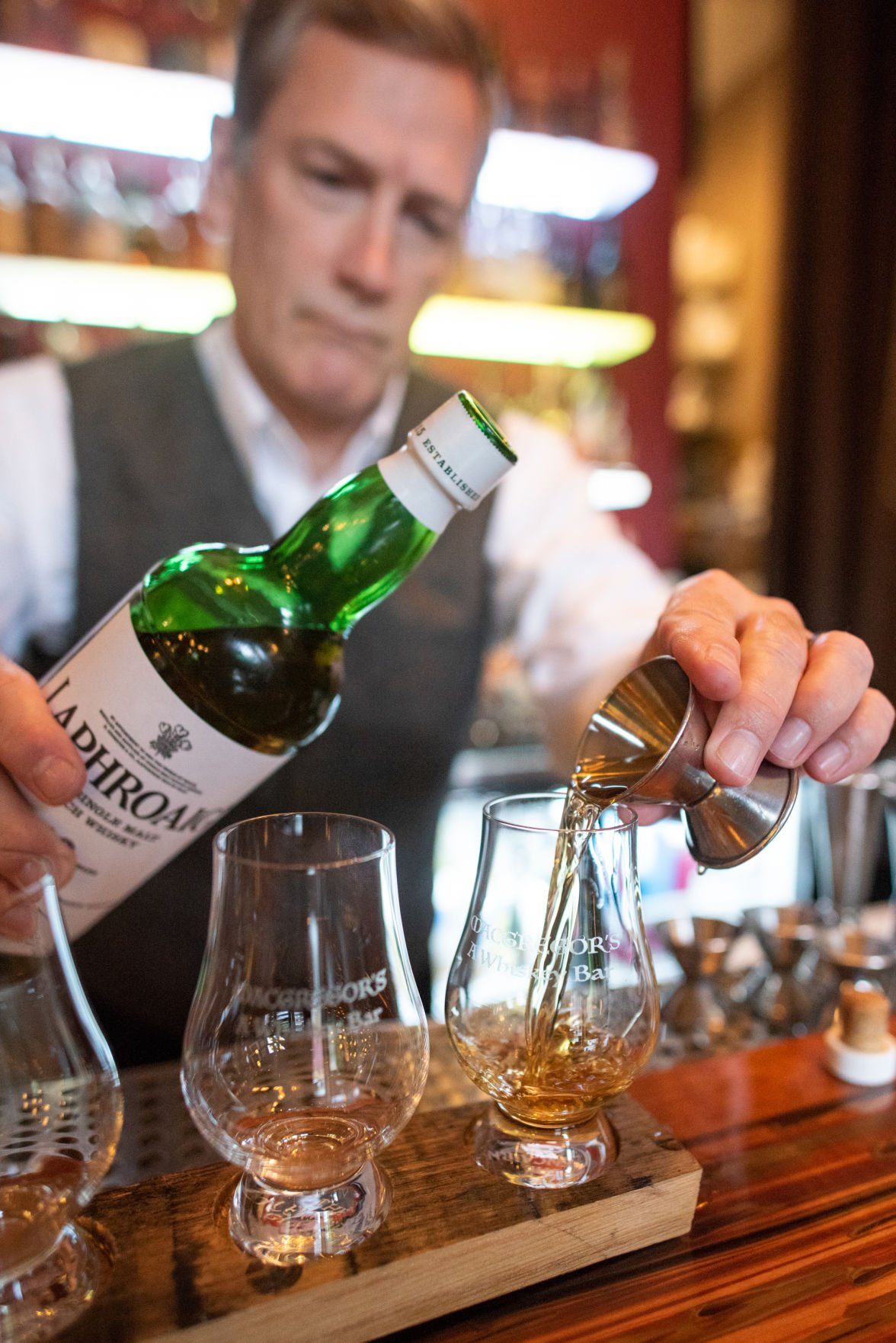 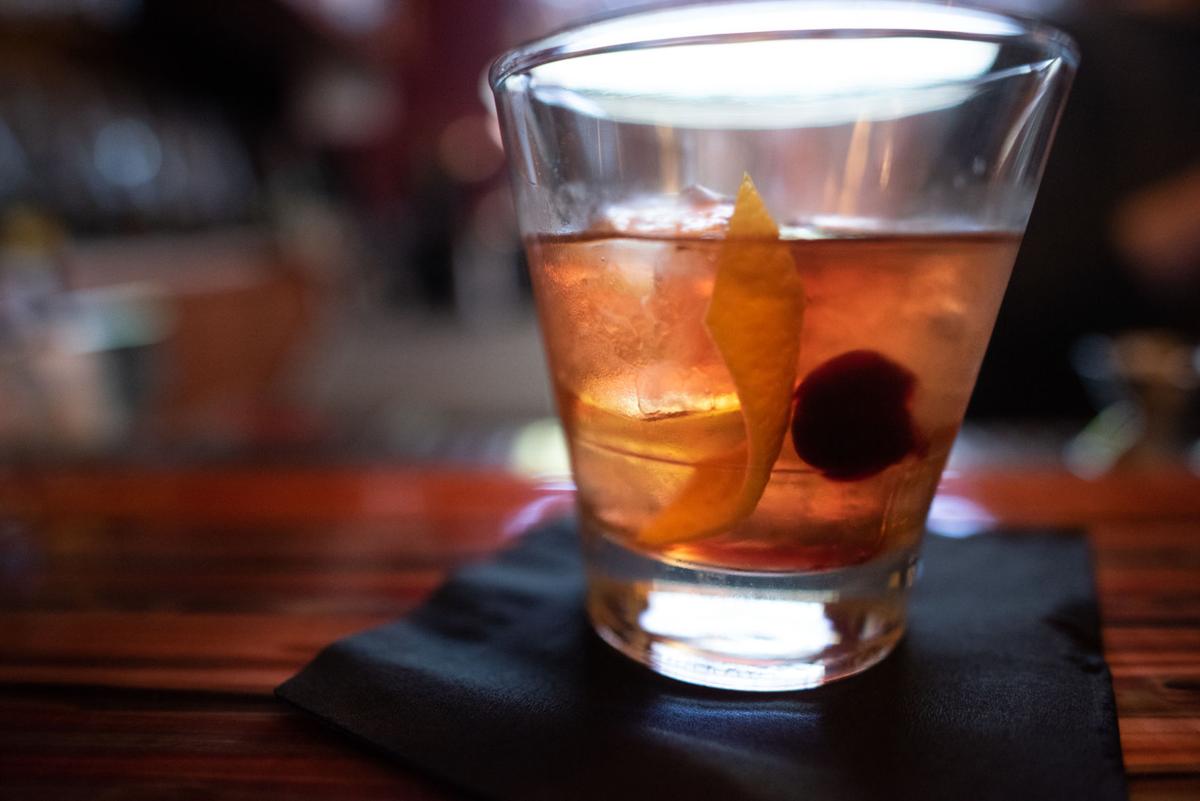 An old fashioned classic whiskey cocktail, which blends sugar, bitters, water and bourbon on ice with an orange peel. 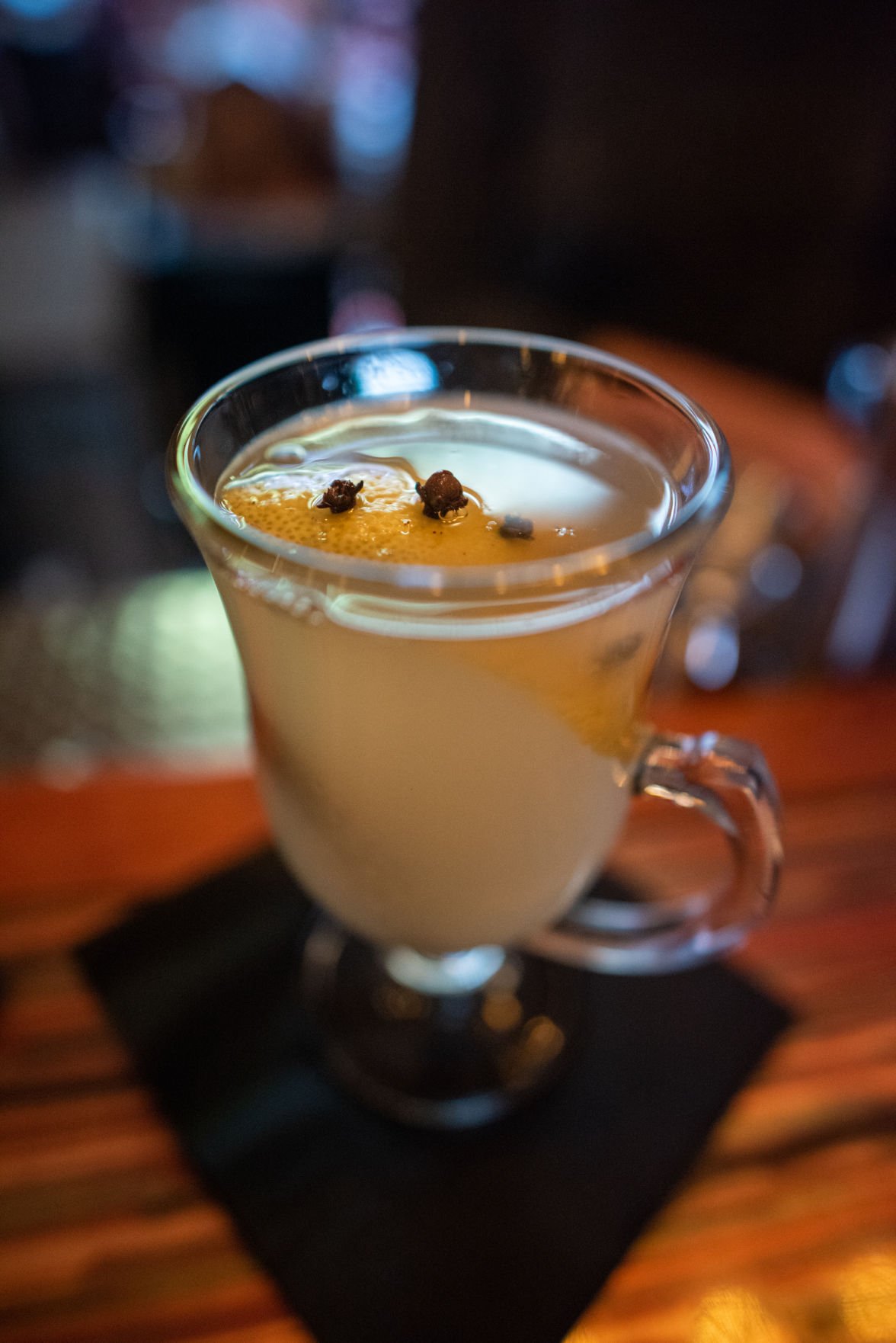 A hot toddy mixes whiskey with honey, lemon juice and hot water and is garnished with lemon slices, cinnamon or cloves. 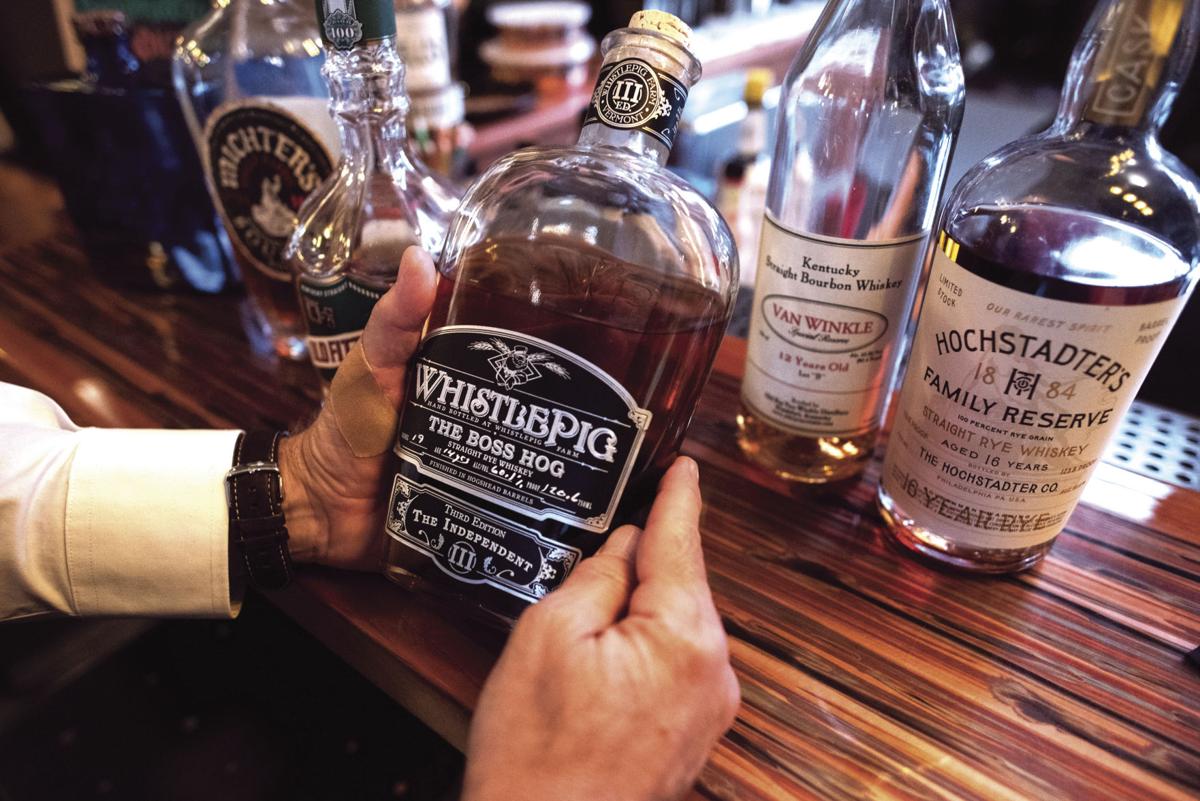 Chip MacGregor holds a bottle of WhistlePig straight rye whiskey from the top shelf at his bar.

The climate on the North Coast of Oregon is nearly identical to that of the Scottish isle of Islay, victim on its western shores to the open moods of the Atlantic and world famous for producing peaty, smoky scotches like Laphroaig. Suffering similar bouts of foul weather, it is no surprise that our coastal communities also have a taste for aged brown booze and its warming effects, though some local whiskey centric establishments have popped up to offer a taste rain or shine.

While you can find a top shelf pour at many of the area’s bars, and there are plenty of craft distillers like Adrift on the Long Beach Peninsula and Pilot House in Astoria and Seaside, Our Coast decided to take a look at some of the local bars built around the idea of whiskeys, cultivated with a near-obsessive sense of collection to produce unique shelves pulled from the world over.

With two locations, MacGregor’s Whiskey Bar boasts a list with over 200 amber liquors.

The original opened just three blocks from the beach — in the former home of Vino, a wine bar — in a building damaged in the freak tornado that hit downtown Manzanita in October 2016, though you wouldn’t know it from its warm, wooden interior.

Owner Chip MacGregor, a literary agent who also sources out the supply, originally developed a taste for the brown drink when working as a publisher for Time Warner in Manhattan in the early aughts. With a last name steeped in Scottish mythology, MacGregor’s interest in aged liquors seems like destiny.

“There were a few books done on the topic,” he said. “And that was just as the single malt rage was beginning and when I would go around with authors, agents and editors, people often wanted to sit somewhere and order a nice Scotch or an interesting bourbon and I realized that I liked this and I wanted to know more about it.”

Having relocated to Manzanita after a stint in Nashville, Tennessee, MacGregor and his wife, Holly, who co-found and runs MacGregor's with Chip, decided to open the whiskey bar and get connected with their new community. “It was something a little different that they didn’t really have here at the beach,” he said.

The couple expanded MacGregor's and recently opened MacGregor's Restaurant and Whiskey Bar in the former Morris’ Fireside Restaurant in Cannon Beach. “I was literally having breakfast in there one morning and looked over and thought this would be a great space,” he said.

While some businesses experience growing pains, expansion does not seem to have hurt the quality of service nor the ample supply of brown liquors on display at the most recent MacGregor’s.

The newcomer, Blaylock’s, in downtown Astoria on the block that has come to be known as “The Duane Triangle,” hope to match or surpass MacGregor’s stock of 200 bottles. Bartender Ben Thompson, who spent two years in Edinburgh leading tours on scotch, says they currently have more than 155 bottles.

Along with bar manager Cory Teubner, Thompson oversees a five-tier whiskey wall, shelled in handsome green tile, with an old-school library ladder. Things are quartered, quarantined and compartmentalized by region—Irish, Scotch, bourbon, Japanese, but know if Teubner has to get up on that ladder, things will get expensive.

This wall is well-curated by co-owner Seth Howard, who along with partner Michael Angiletta, has put together an extensive collection of bottles, ranging from the known and necessary to the rare.

These establishments do have a few things in common: upscale, wooden interiors, small plate offerings focusing mostly on charcuterie and sharable snacks and friendly, knowledgeable black-clad staffs. Both also offer flights designed by region or specialty, like an Oregon or Japanese whiskey flight.

Each has its own extravagances and whimsies too, like MacGregor’s pour of a rare Pappy Van Winkle that goes for a modest $139 or Blaylock’s Jefferson’s Ocean Aged at Sea, which is also a Kentucky bourbon, but this one is barreled and tied to a boat that swings across the equator four or five times, from Antarctica to elsewhere, experiencing severe weather that allows the barrels to swell and release. It’s this kind of magical thinking that allows for a $22 price tag on a two ounce pour.

Each place also has its own ways of creating a fan base and encouraging regulars. Blaylock’s recently opened a private bottle room — which, with blue fluorescent lights, looks like a locker room built in the movie “Tron” — where customers can store their own stock. They also have a whiskey passport where as you drink your way across a region of the world you can earn a prize.

MacGregor’s also has a whiskey club, dubbed as a secret society, which features first pours from rare bottles and monthly tastings as well as other events.

MacGregor partnered recently with Rogue Distillery out of Newport to create a new spirit. “The reason was they had six barrels of distilled spirits that were aged different ways. They were kind of leftovers—orphan barrels basically,” he said. “So they invited a couple of us in. You know, so you mix and match and we soon came up with a flavor. They are calling it the Pinot Project as the whiskey is spending the last few months of its life in used Pinot Noir casks. It’s in very limited quantity.”

Owning a whiskey bar isn’t always just fun and games. Some visitors want to know what’s best, and are disappointed without an answer. “People always ask, ‘What’s your favorite?’” MacGregor said. “And for me, it always depends on the mood I’m in and the place I’m at. In the wintertime, when it’s cold, I love a great smoky Islay scotch. But other times, when it’s not windy and rainy, I love a great rye. If I had to pick one thing, I would say I love WhistlePig Rye. WhistlePig is a product out of Vermont. They just make a great rye whiskey.”