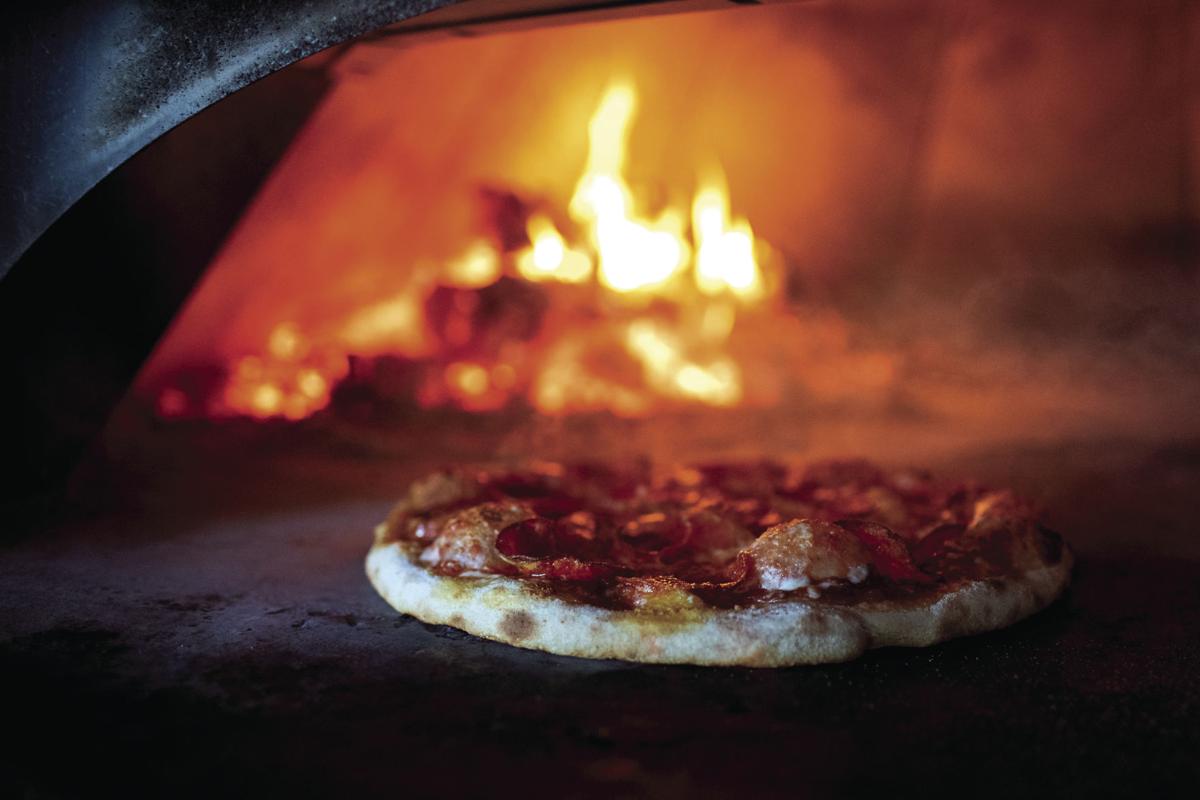 A pepperoni pizza sizzles in the hot woodfired oven at Fort George Brewery. 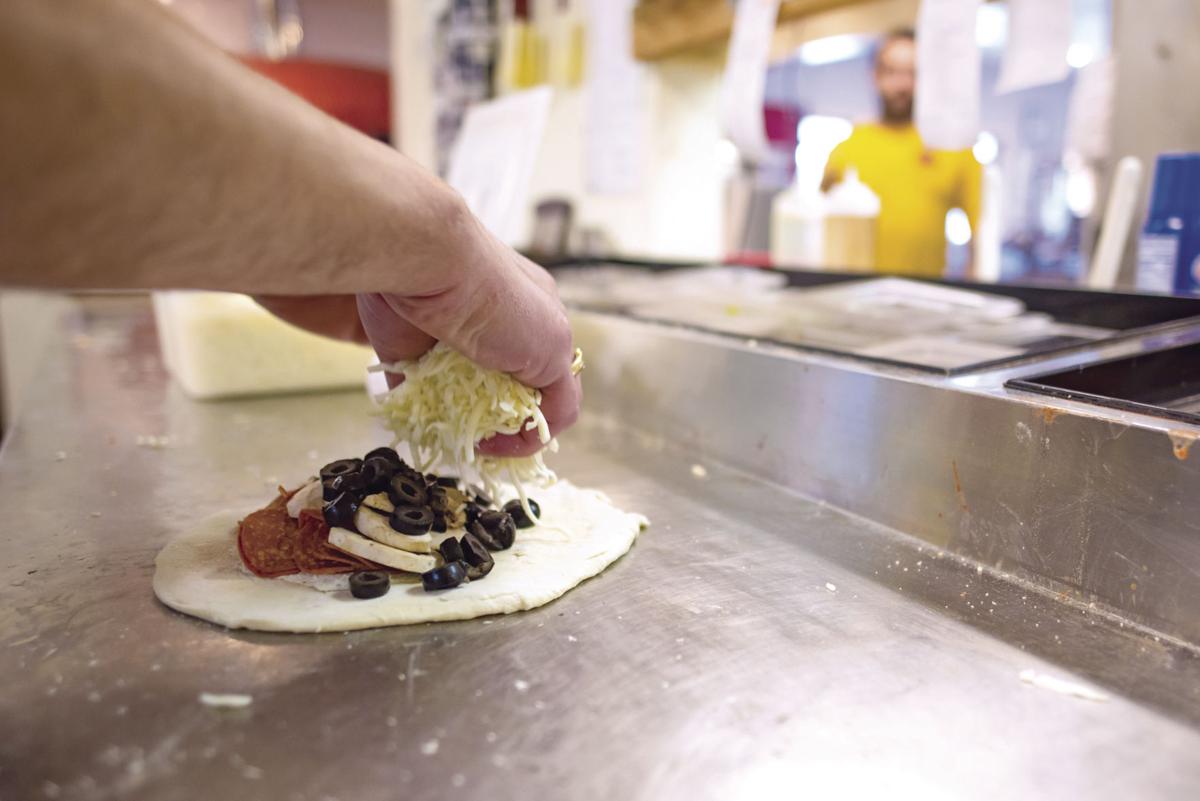 An Angelina’s Pizzeria and Cafe worker fills a calzone with pepperoni, olives and lots of mozzarella cheese. 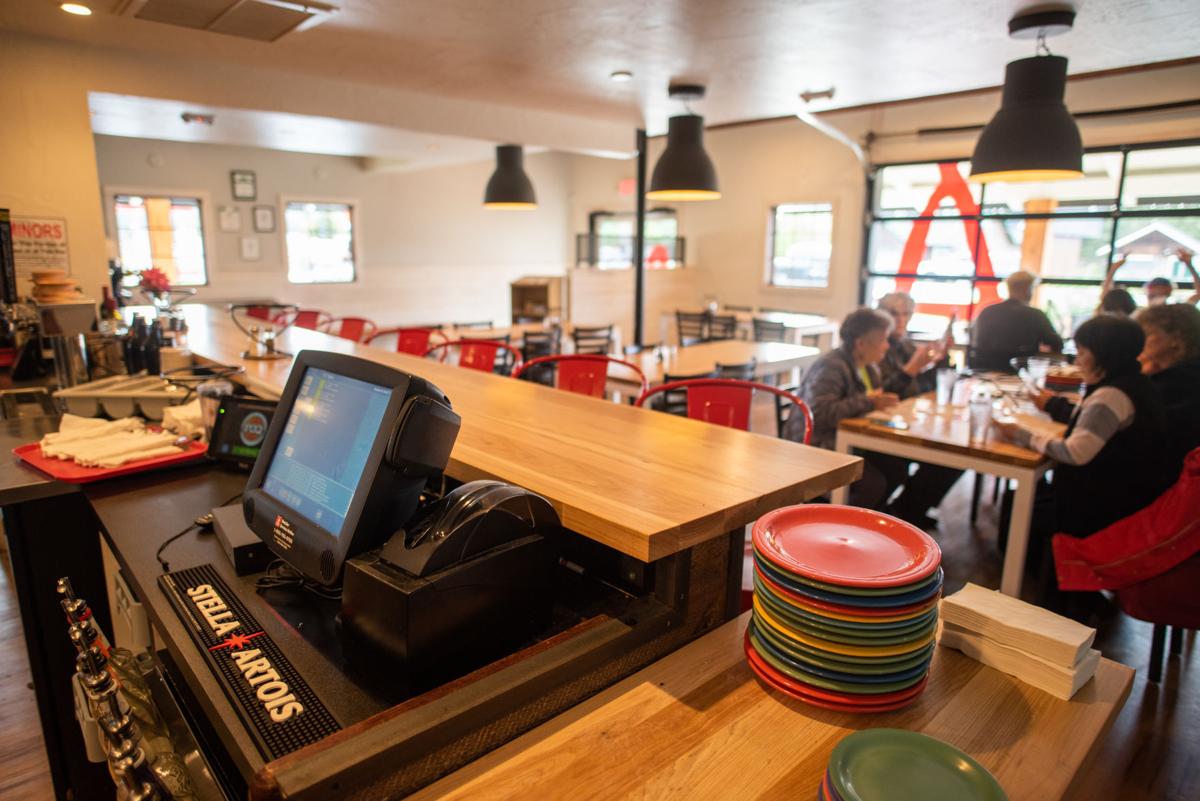 Angelina’s Pizzeria and Cafe is located right off U.S. Highway 101 in Seaside. 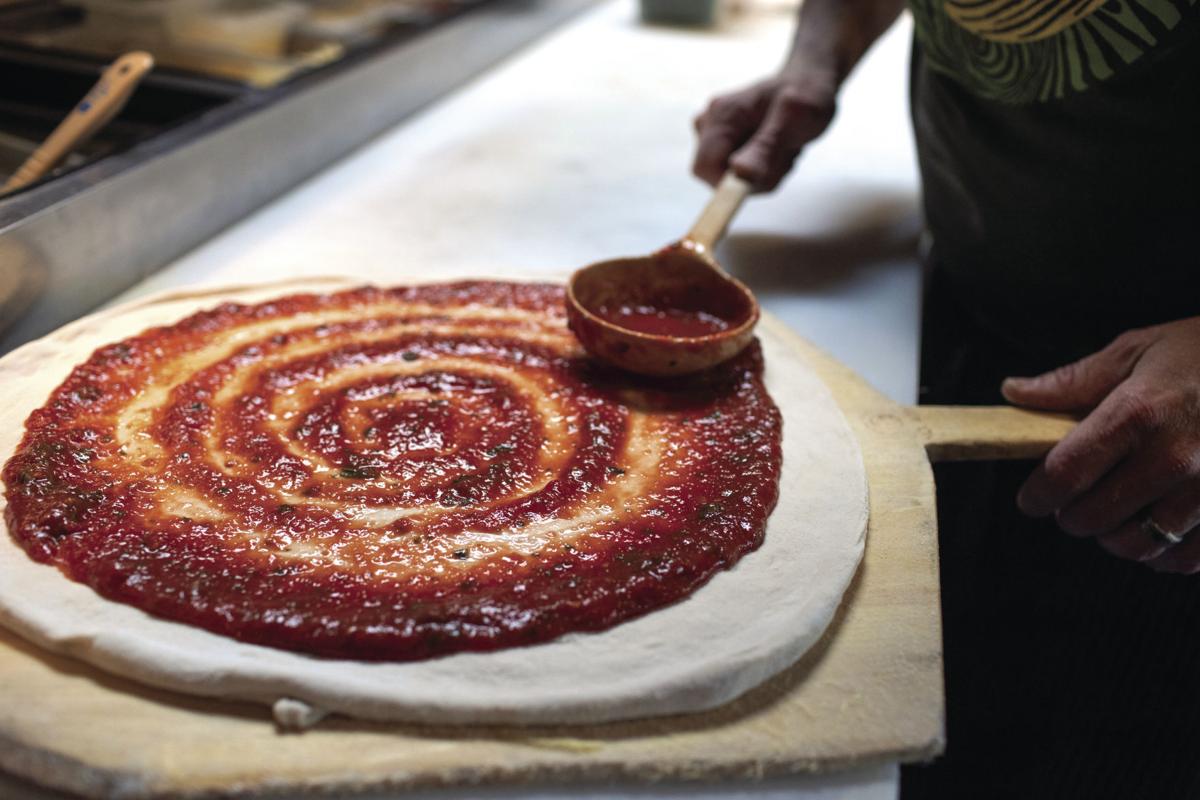 Marinara sauce is evenly spread in a perfect spiral across the fresh dough at Fort George Brewery. 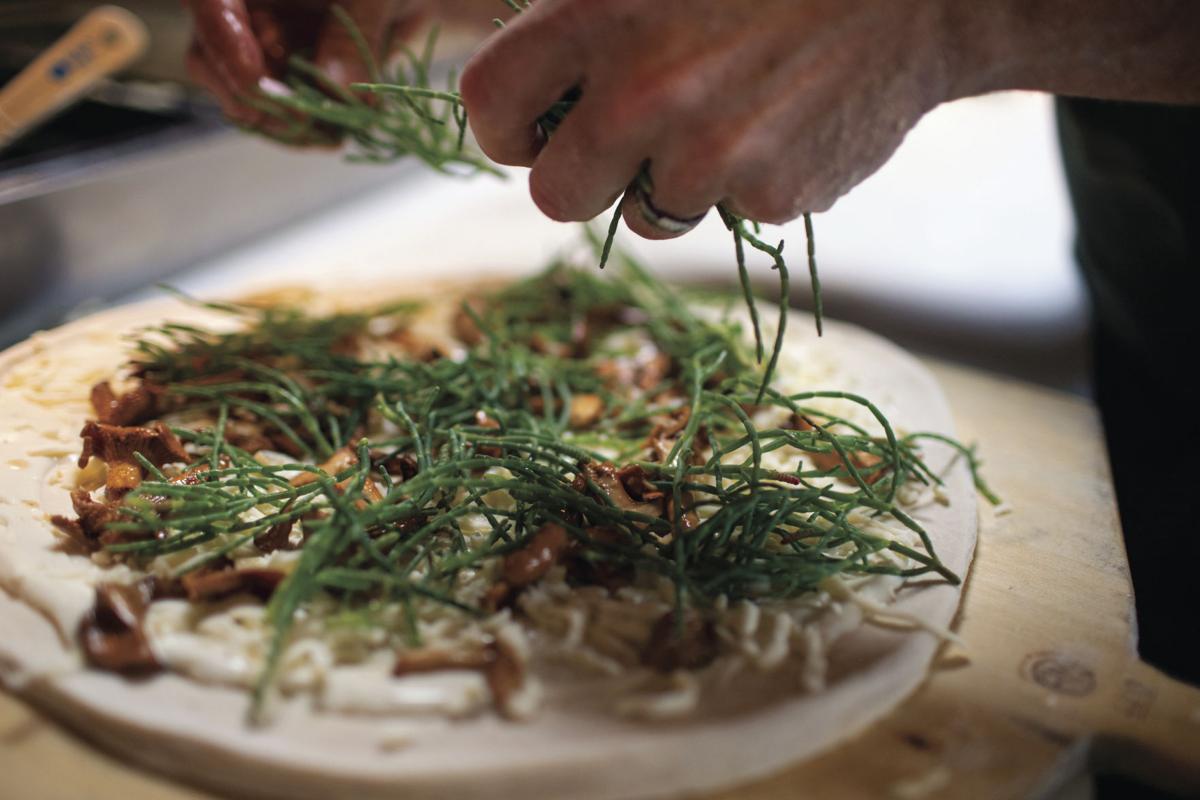 Fresh greens are sprinkled on a forest pizza at Fort George Brewery. 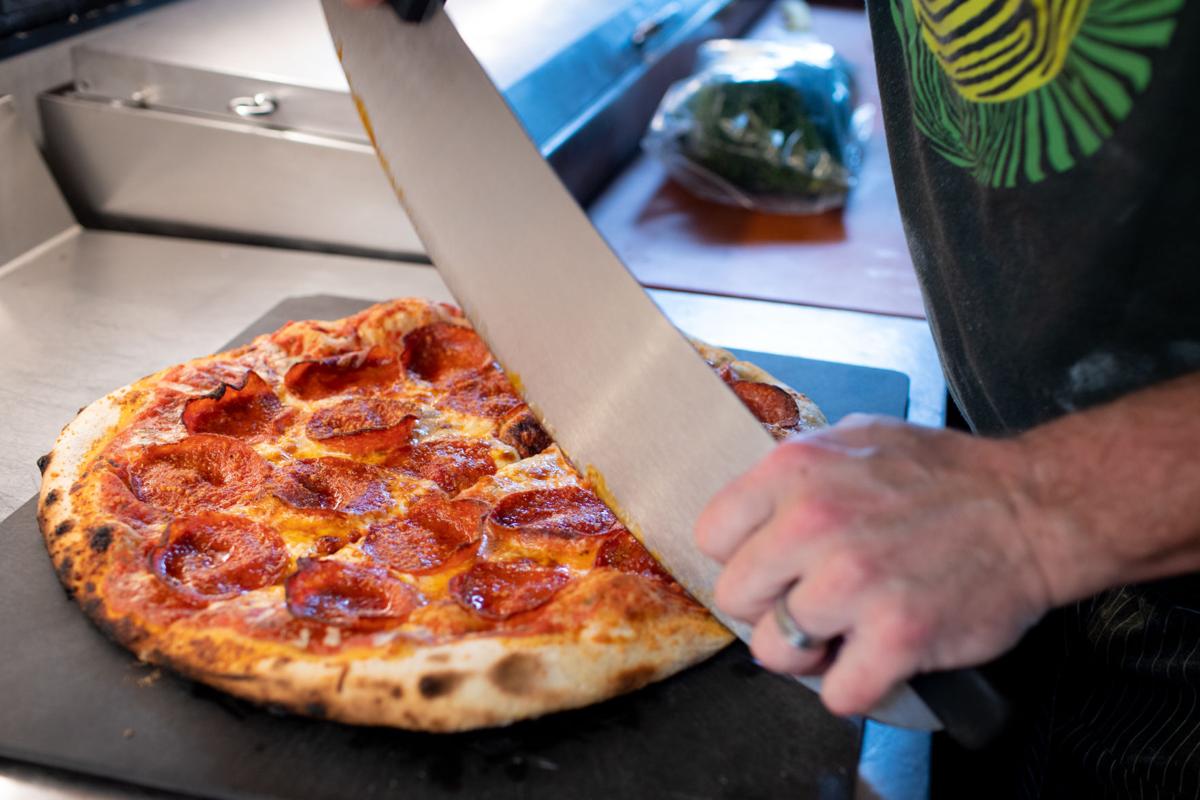 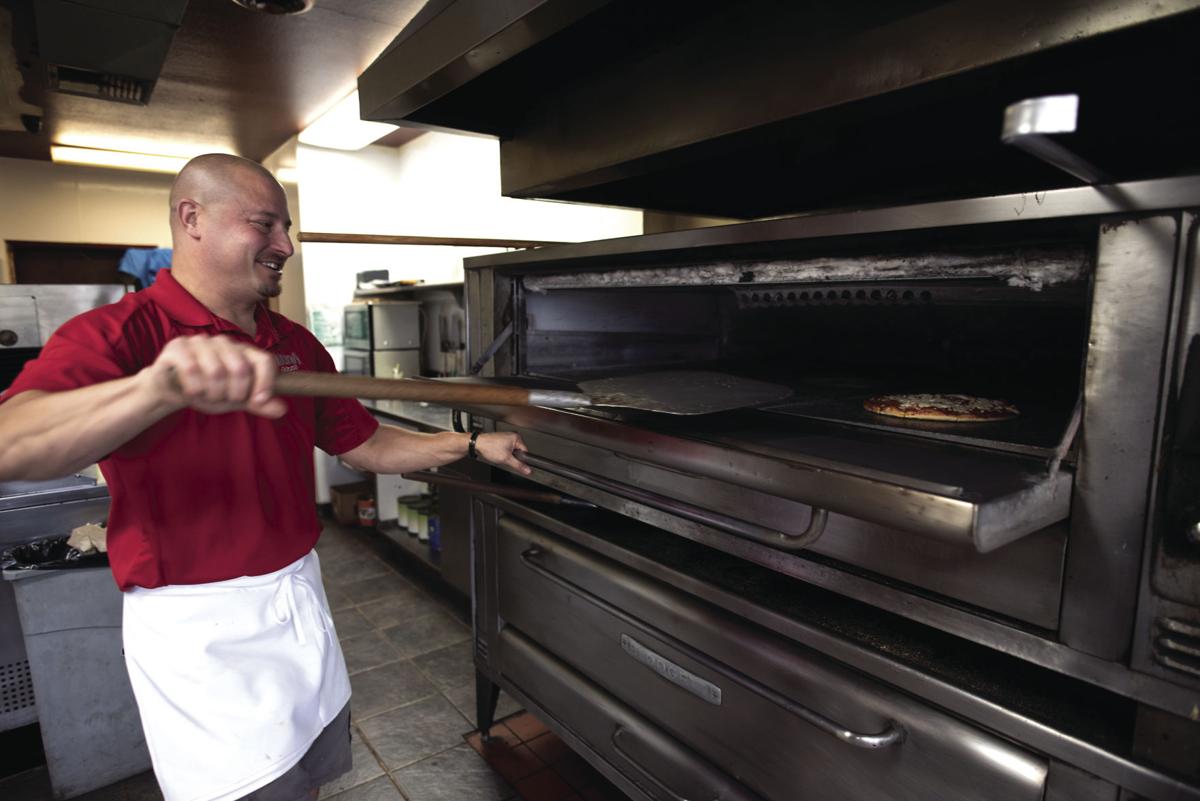 Astoria Fultano’s owner Mark Cary slides a pizza into the oven in the back kitchen. 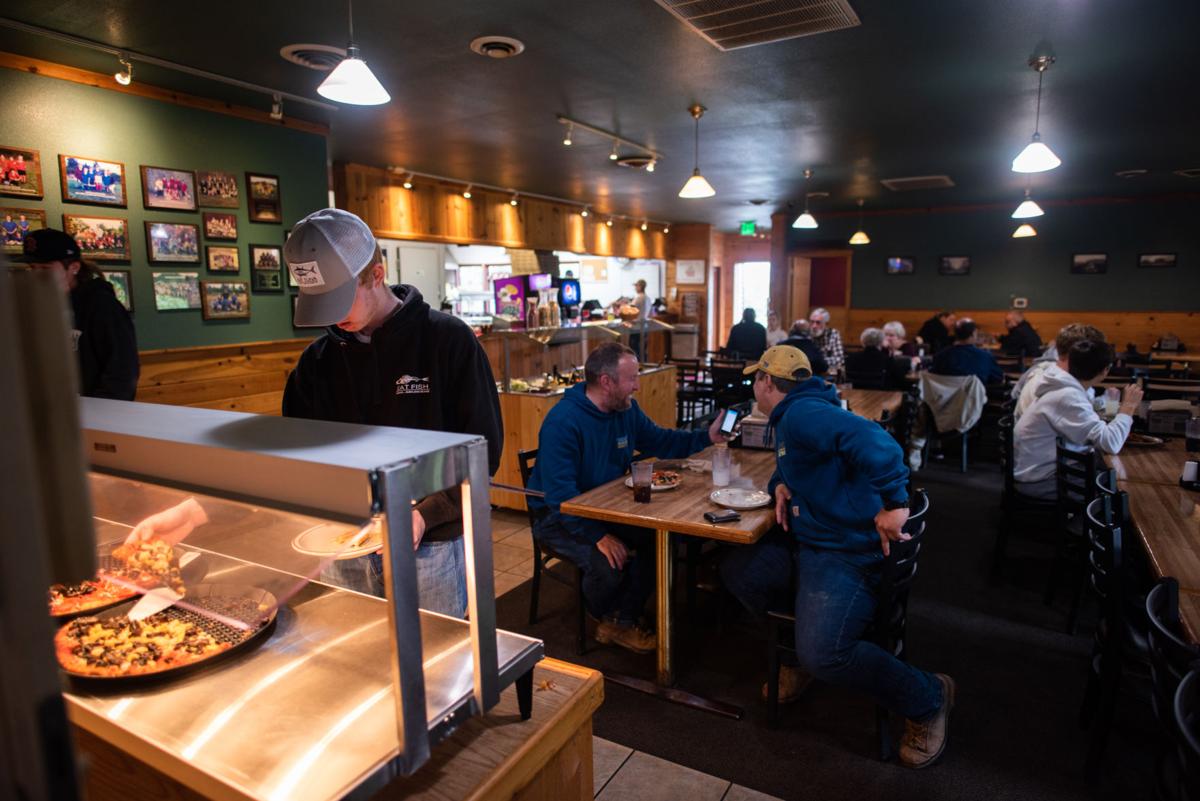 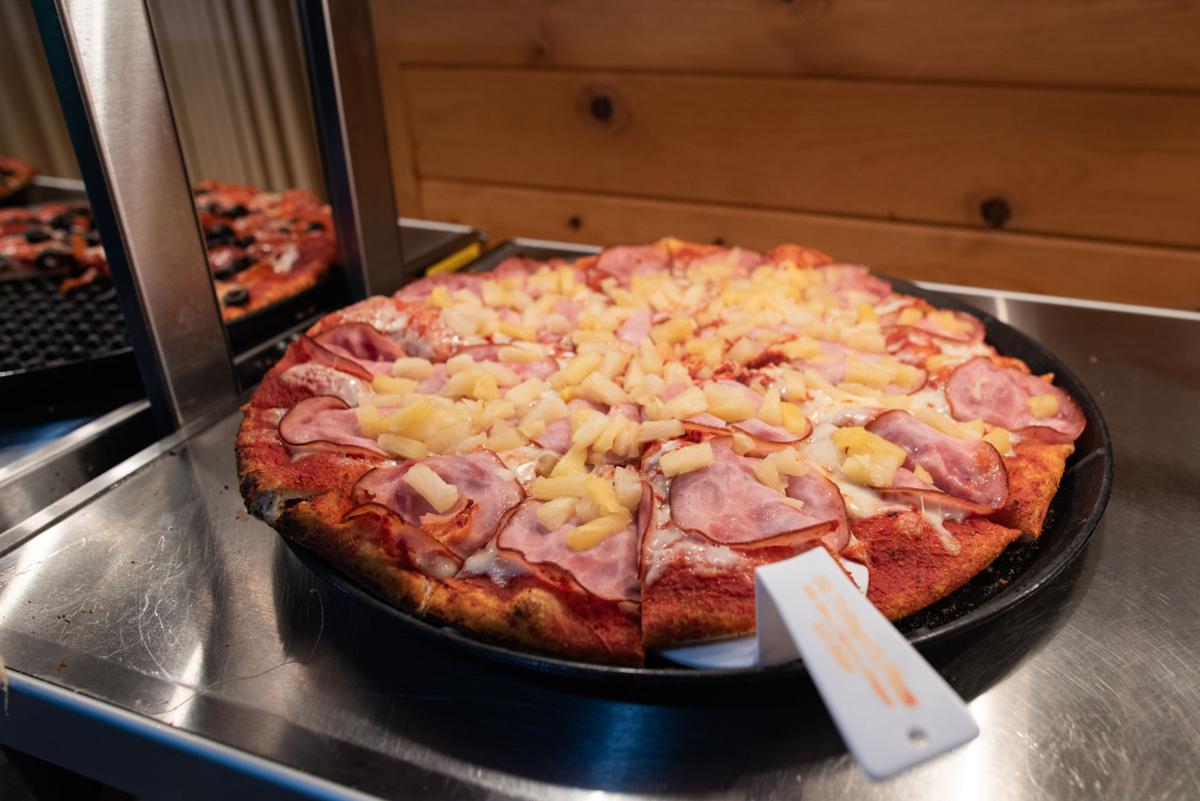 A fresh Hawaiian pizza ready to be eaten at Fultano’s Pizza in Astoria.

A pepperoni pizza sizzles in the hot woodfired oven at Fort George Brewery.

An Angelina’s Pizzeria and Cafe worker fills a calzone with pepperoni, olives and lots of mozzarella cheese.

Angelina’s Pizzeria and Cafe is located right off U.S. Highway 101 in Seaside.

Marinara sauce is evenly spread in a perfect spiral across the fresh dough at Fort George Brewery.

Fresh greens are sprinkled on a forest pizza at Fort George Brewery.

Astoria Fultano’s owner Mark Cary slides a pizza into the oven in the back kitchen.

A fresh Hawaiian pizza ready to be eaten at Fultano’s Pizza in Astoria.

Whether you call it pie or za, there is no disputing that pizza has long been a national obsession, not to mention an easy way to pacify the family without turning on the oven, unless you aim for take and bake.

As universal as pizza is, or perhaps because of this, it is also always the subject of debate. What flour makes the perfect crust? How long does it need to rest or proof? How much sauce is too much sauce? Not enough cheese? Too much cheese? To fold or not to fold? Let’s not even get started on toppings, which can range from none to anchovies to BBQ chicken and everything else in between. Bringing silverware into this conversation will also only elicit open-mouthed scoffs from some purists while offending others.

Of course, the debate extends far beyond components, methodology and utensils. Pizza is also extremely regional — a source of pride for cities and nations the world over. Since 1997, Neapolitan pizza — zoned by ingredient in the fabled birthplace of pizza, Naples, Italy — has obtained an official DOC or denominazione di origine controllata (denomination of control), a government-backed protection usually only applied to wine and cheese and other location-based delicacies.

The debate in the states tends to run between first and second cities: thin and balanced New York or extravagant, casserole-deep Chicago. Neo-Neapolitan is trying to worm its way into this argument one artisan decade at a time by way of wood-fired ovens and organic sifted flour.

The North Coast doesn’t have a particular style of pizza. It’s more an amalgamation of traditions stopped hard at the edge of the continent by Pacific winds. In Astoria alone, the upper chamber of Fort George tosses out amazing wood-fired pies, Baked Alaska’s pizza annex let’s kids design their own before they are blistered in a gas oven and newby food cart Pizzuti’s splashes pies and slices with fresh basil or arugula for no extra charge. Sahara has its delivery game down; it’s what Domino’s aspires to be. On the water, Inferno Lounge also serves up New York-style slices.

Generally, you’ll see more seafood toppings offered on the North Coast than I hope you would, in say, Oklahoma. Speaking of, you won’t find Midwestern varietals — Chicago deep dish, Detroit-style — around here.

Today, pizza is strictly comfort food. And a comfortable place to eat it can be just as satisfying as a good slice. The unsung hero of all pizza is the traditional American parlor, where pies take no sides and soccer teams can kamikaze at the fountain machine on their way to the video games.

Our Coast rolled through a number of pizzerias which hit this family-friendly vibe without anyone having to risk too much dough. That said, most splittable pies do crest at over $20. Single $ apply to other menu items like appetizers and sandwiches.

Nestled amid a bustling corridor of downtown Cannon Beach, Pizza a’fetta has been hand-tossing award-winning pies since 1988. Once named one of the 50 Best Pizza Restaurants in the Nation by Pizza Today Magazine, Pizza a’fetta’s dining room is done up in a minimal yet classic parlor style, replete with the requisite red-checkered tablecloths, an upstairs banquet room and an adjoining to-go slice shop. The pies start with a delightfully spongey and airy crust that’s built upon with top-notch ingredients. When the weather is nice courtyard seating surrounding a gurgling fountain is the way to go. And don’t forget to save room for dessert at the ice cream shop next door. Pizza a’fetta plans to open another location in Seaside in the future. Signature dishes include the Smoked Basil Chicken pie (14” $21.95/18” $32.95) and the Crab Artichoke Dip ($10.95) served with pesto breadsticks.

Angelina’s was always a solid stop for za in Seaside even before they moved across U.S. 101 to their more spacious and refined digs a few years back. With a cozy fire pit out back and a dramatic bed of inferno out front, Angelina’s really visualizes the flames they submit their pizzas to. Football-sized calzones, Stromboli, salads and sandwiches round out a very large menu. Pizza toppings include all of the usual suspects, some BBQ and Alfredo based specialties, but for a truly unique experience try The Philly (8” $13/12” $24/16” $30), which, like the name suggests, is a deconstructed Philly Cheesesteak with Italian beef, red onion, green or pepperoncini peppers, cheddar and mozzarella all sitting atop a house-made cream cheese sauce then baked until bubbly. Who says you can’t cheese up your sauce too?

With various spots littering the region, Fultano’s is the undisputed king of North Coast pizzaioli if only by pure volume alone. This is the pizza that coasties cut their teeth on. From Cannon Beach to Clatskanie and beyond, each Fultano’s is a little bit different as they are all operated as single-owner franchises. The Seaside Fultano’s is attached to the Funland Arcade on Broadway while the Gearhart location on U.S. 101 is inside the bowling alley. Astoria’s west end room is a classic pizza parlor with a small nook for video games and a large room for banquets and other events. Some similarities you’ll find between each  location is a thick and garlicky ranch sauce, a salad bar and an all-you-can-eat lunch buffet. The pizza too is pretty standard across the board — an abundant amount of cheese and toppings. Where you really find the small variations on the menus is in the specialty pizzas which are named after hyper-local nods. For instance, order the Seasider at the Seaside location or the Fighting Fishermen — named after the high school’s sports mascot at the Astorian location — and you will get a unique combo with bay shrimp, mushrooms and olives.

Geno’s offers a classic parlor-style pie in the sort of dimly lit room one used to find at Abby’s Legendary and other vanishing institutions. The pie is cracker-crisp on the bottom but still airy throughout as the cheese and toppings flow towards the outer edge where they burn into little bits of goodness against the pan. Like the name implies, yes, there are burgers — some quite gluttonous, like the 1 and 1/3 pound Double Super Burger patty — but also salads, hot sandwiches and all manner of things beer-battered and fried. Signature pies range from interesting vegetarian options like the Otis Opus (sm. $12.45/ lg. $25.15), which combines smoked gouda, artichoke hearts, garlic, red onion and sun-dried tomatoes atop an olive oil base, to the truly unusual, like the Breakfast Lover’s (same pricing), which starts with a pour of country gravy before layering on cheese, scrambled eggs, onion and sausage or bacon. Like a breakfast skillet on a pan crust.

Behind the brilliant, mid-60’s kitschy façade of Chico’s, things can get pretty busy, especially during the summer. In such a large space, rambunctious kids, percolated by fountain drinks, speed off in every direction with the faulty GPS of unnerved cats. Fans of “Stranger Things” will appreciate the 80s-period arcade games. In fact, much of the experience of eating at Chico’s is like time travel stung with nostalgia, though the prices have certainly increased since the year “Back to the Future” was released, but what hasn’t? As for the pies, Chico’s is not afraid of cheese. The crust is crisp and the toppings are plentiful. One distinctive feature of Chico’s is they certainly offer more combos featuring Canadian bacon than other joints, including the Sore Thumb (sm. $11.95/ lg. $25.20), which includes the aforementioned up-north ham, pepperoni, German and Italian sausage and ground beef. A Seafood Combo (same pricing) pairs bay shrimp with smoked oysters and anchovies upon request.

From my point of view, Angelina’s Pizzeria and Café is way much better than all other pizza making restaurants in this area. It is good to read best research paper writing service reviews before help in essays online. I gotta assure you guys that you are going to love each one of the slices of their pizza.