You have permission to edit this article.
Edit
Our Publications
Share This
1 of 5 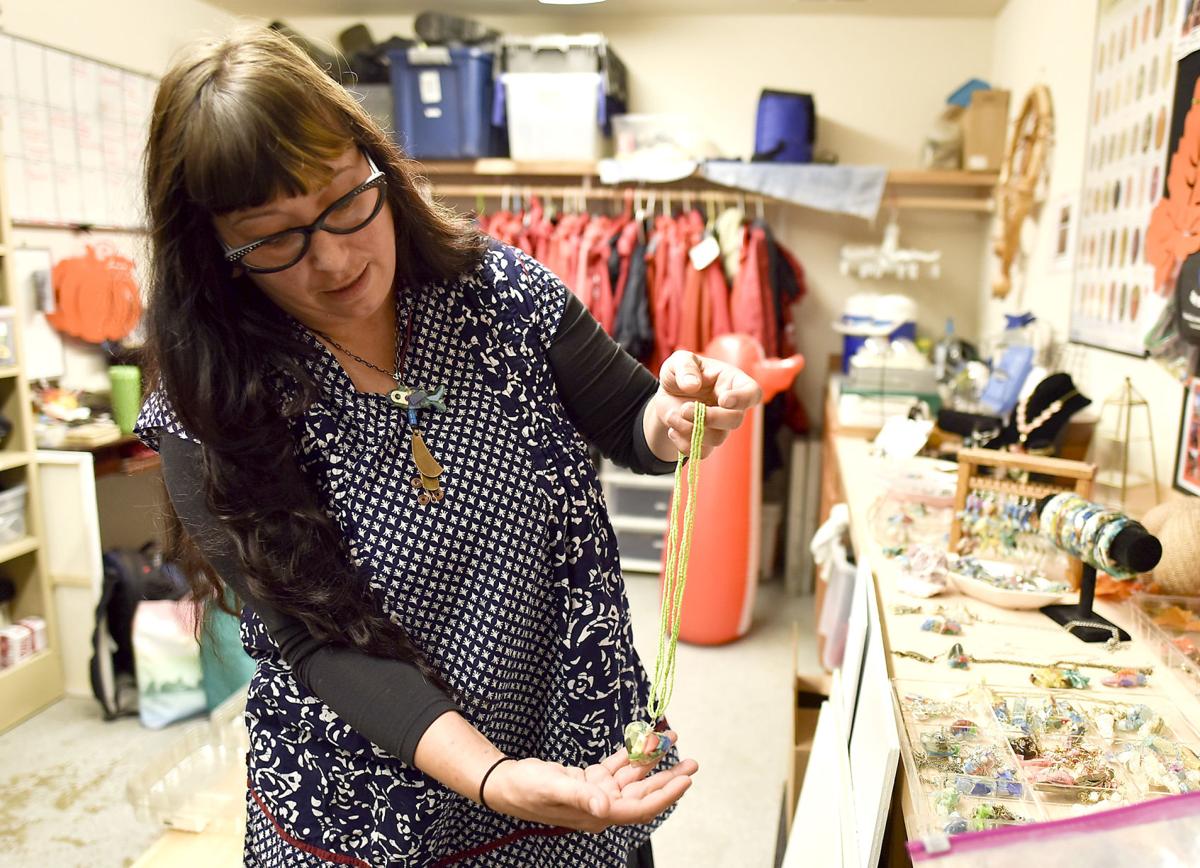 Pooka Rice, outreach coordinator with the Haystack Rock Awareness Program, shows off jewelry made with pieces of plastic debris removed from local beaches. 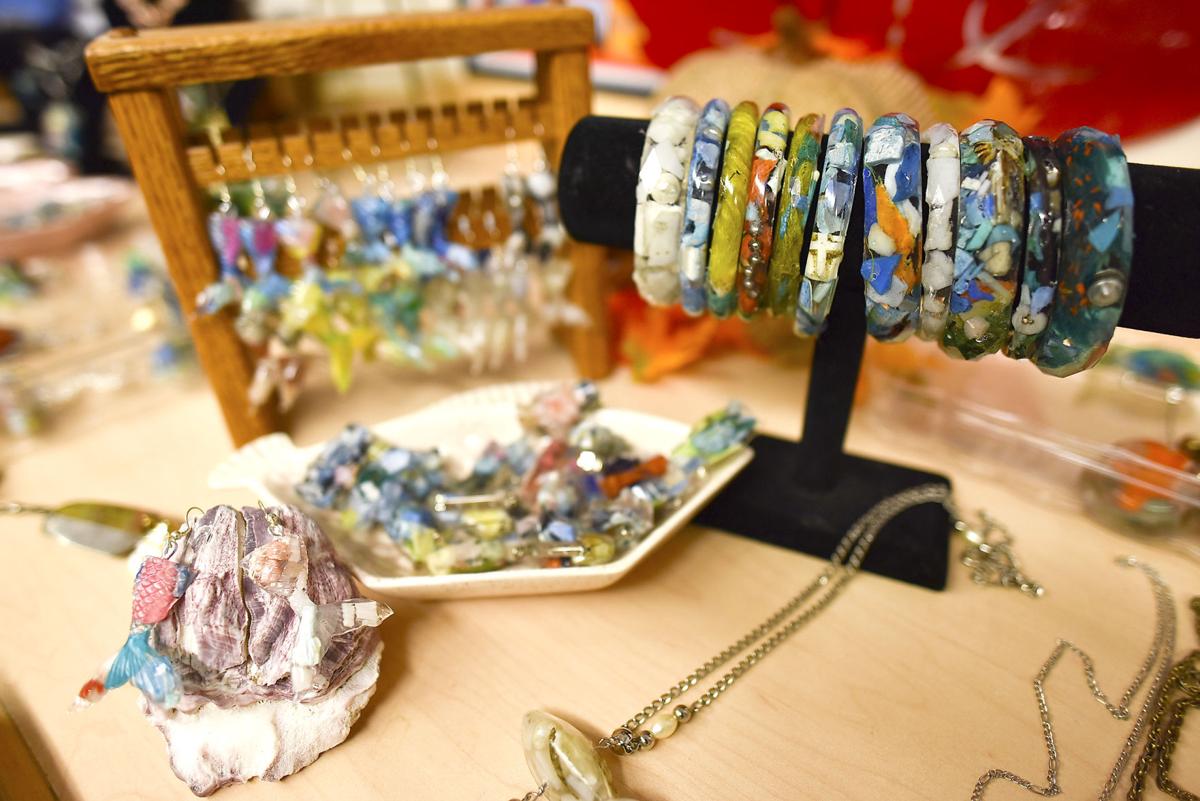 The finished products from the line of jewelry include pieces of plastic removed from local beaches embedded within earrings, bracelets and other decorative adornments. 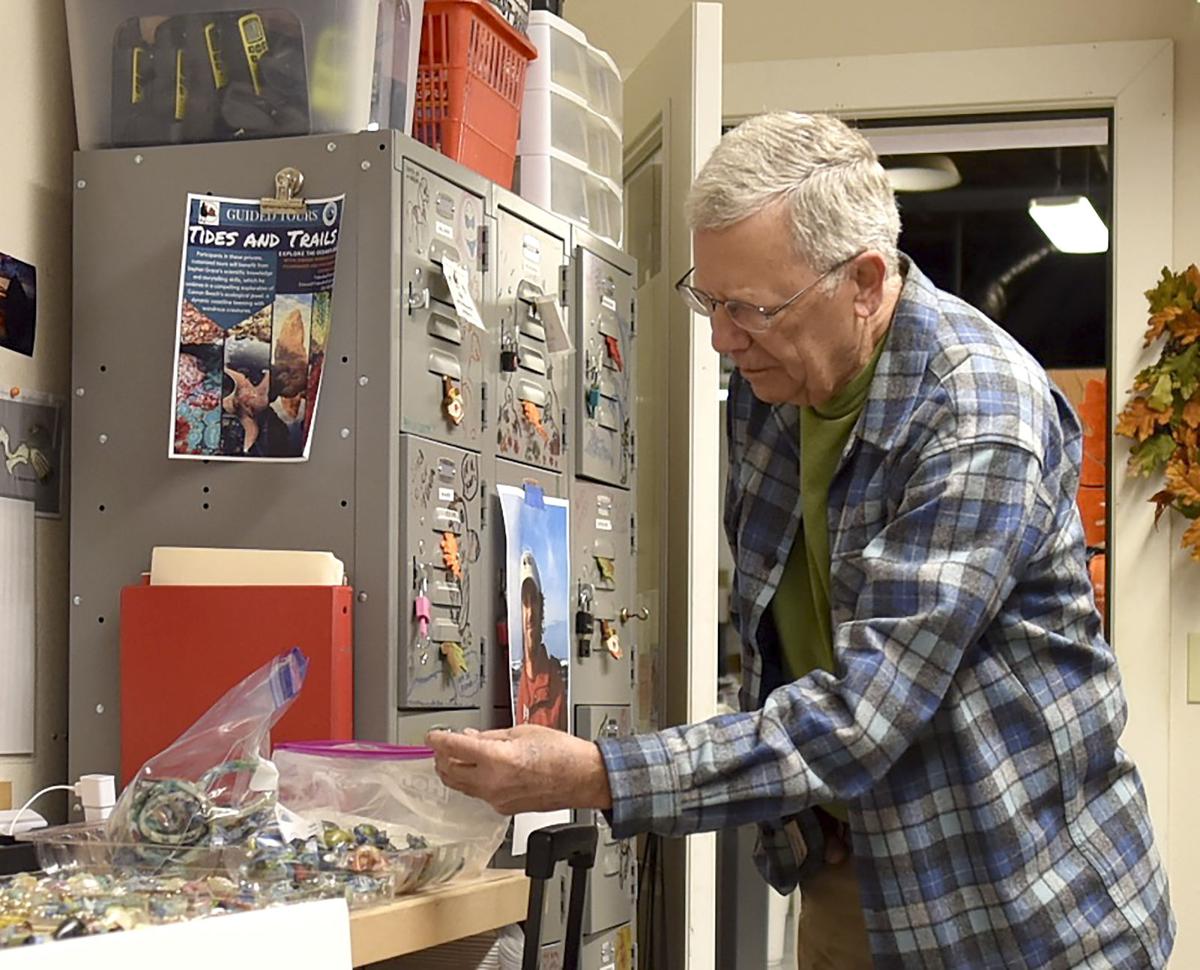 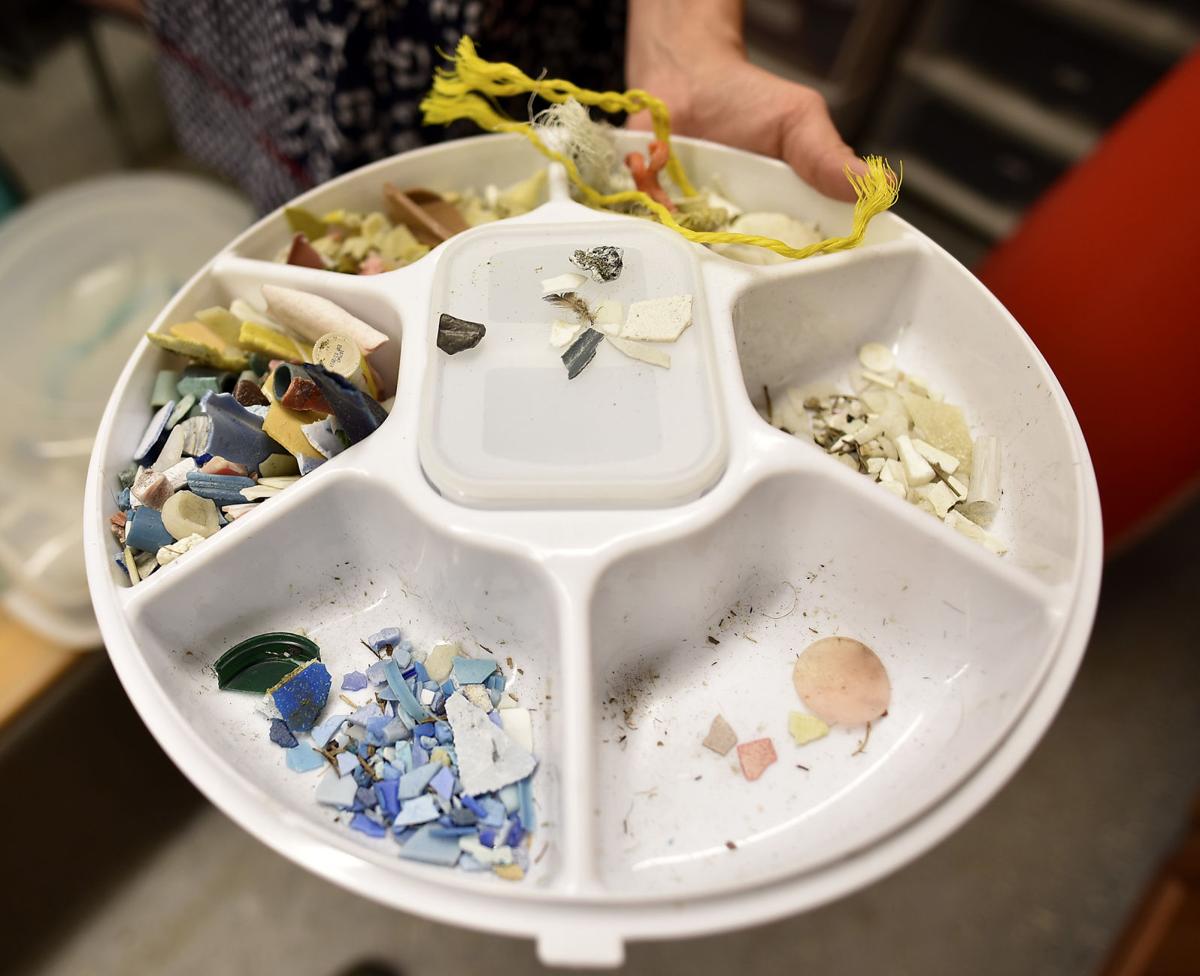 Pooka Rice holds up a tray of pieces of plastic and other materials removed from area beaches that are used in making her line of jewelry. 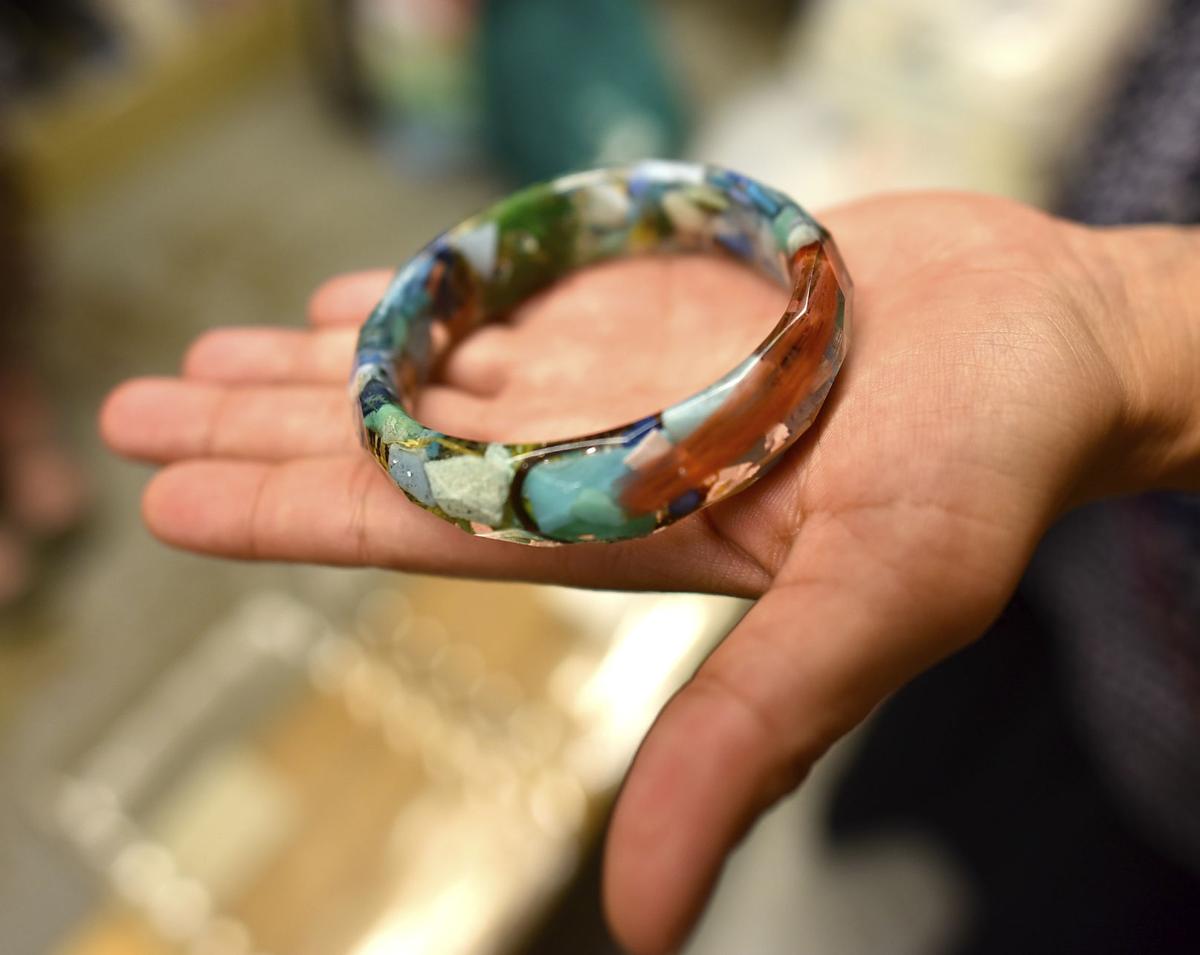 Pooka Rice holds up a bracelet made with pieces of plastic debris recovered from local beaches.

Pooka Rice, outreach coordinator with the Haystack Rock Awareness Program, shows off jewelry made with pieces of plastic debris removed from local beaches.

The finished products from the line of jewelry include pieces of plastic removed from local beaches embedded within earrings, bracelets and other decorative adornments.

Pooka Rice holds up a tray of pieces of plastic and other materials removed from area beaches that are used in making her line of jewelry.

Pooka Rice holds up a bracelet made with pieces of plastic debris recovered from local beaches.

Haystack Rock Awareness Program's "Trash Talk" reinvents that old, familiar saying with a line of wearable art jewelry handcrafted from the bits of marine debris that are all too common on our beaches.

Thanks to this program, all of our trash has become our treasure.

Trash Talk began as a result of HRAP's Citizen Science Marine Debris Survey in combination with a microplastic beach filtration with the Sea Turtles Forever organization, according to Program Coordinator Pooka Rice.

"As I walked along the high tide line, I noticed that the plastic bits resembled confetti," she said. "It struck a chord in me, and I realized these pretty little pieces of plastic were attractive to our sea life."

And that, she added, is the crux of the problem: With food scarce, animals choose plastic over harder-to-find natural food sources. From there, the plastic enters our food web. In other words, it's a global issue, not just a beach issue.

As an artist, Rice viewed the debris as a potential vehicle for educational awareness. Wanting both to keep the trash out of landfills and create dialogue around a devastating ocean issue, she created the concept of Trash Talk, which has grown over the past year to include jewelry, art and educational pieces.

HRAP Director Melissa Keyser immediately saw the value of the project as an educational and ecological tool.

Trash Talk began in a "beautifully organic way after our (program coordinator) realized we disposed of the marine debris, collected in our monthly survey, in the trash," Keyser said. "It's a much more effective way of capturing and preventing environmental damage."

The global numbers are daunting: The Center for Biological Diversity estimates that, at current rates, plastic is expected to outweigh all the fish in the sea by the year 2050.

Rice wondered if there was a way to help humans connect with this issue through art.

"We started with heart-shaped molds I had," she said. "We encased the microplastics in resin and made pins to wear."

Trash Talk embodies HRAP's mission to inspire stewardship through education. It also gave HRAP a tool to facilitate conversations about plastic in our environment.

As an education-based program, HRAP's main goal is outreach — to inspire humans to be better stewards of our marine environments.

"Trash Talk enables us, as educators, to reach visitors and interested folks, from a variety of backgrounds," Keyser said — it gives them information and an actual piece of "trashy" art they can use to better understand the issue and have meaningful dialogues with others.

"We want everyone talkin' trash," she said.

If you're not into collecting beach debris, Trash Talk accepts donations of old and broken jewelry to be reused for the project. Microplastic collections and old, broken jewelry can be placed in a bag or container and left in the garbage bin labeled "Haystack Rock Awareness Program Marine Debris," located at the back entrance of Cannon Beach City Hall next to the dumpster.

In the bag, remember to include your contact information so HRAP can send you a thank you. One gallon of beach debris is sufficient material to host two to five workshops, make more than 30 pieces of jewelry or one 12-inch by 12-inch art piece.

The results are promising, as Trash Talk has a robust offering of products made from beach debris. The sale from all the pieces goes toward supporting HRAP beach programs and aided in the recent purchase of beach-accessible wheelchairs.

"We realized that we humans have a lot of resources that we waste," Rice said. "This is a way to inspire others to be better stewards of our environment."