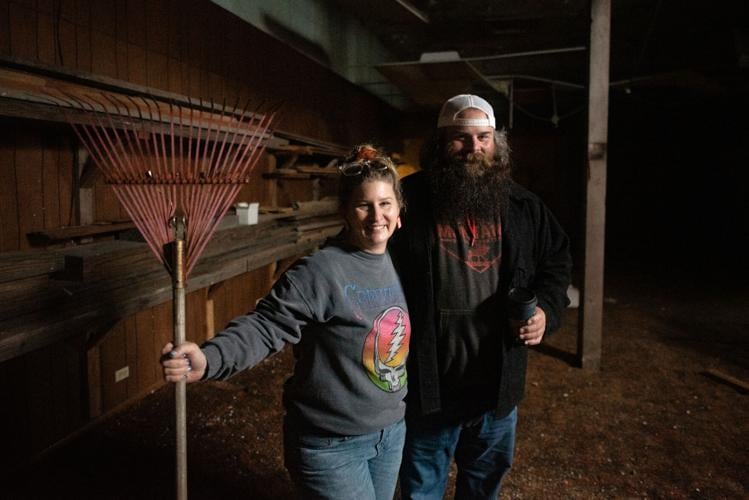 Emily Engdahl and Justin Grafton stand in a large room in their property near Peter Pan Market & Deli in Astoria. 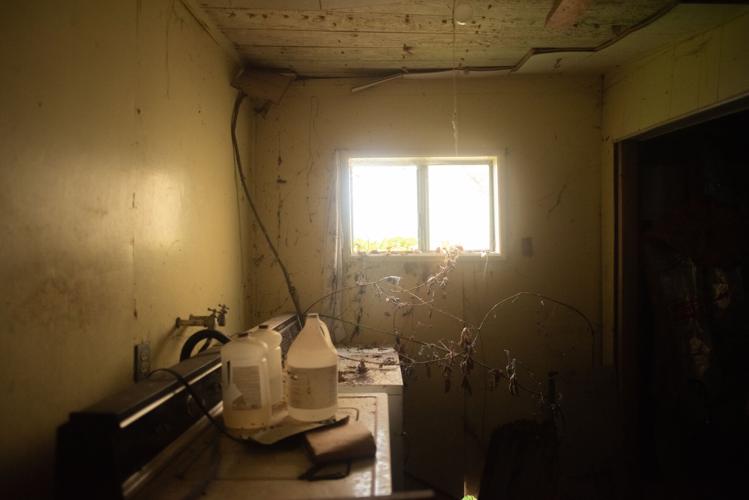 Plants climb the laundry room's wall at the property. 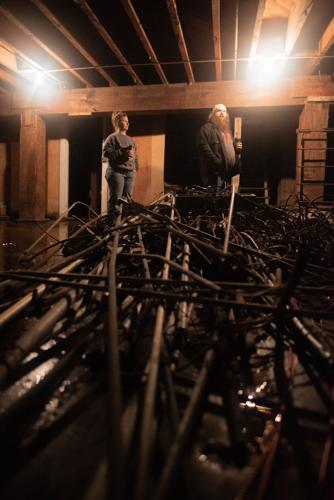 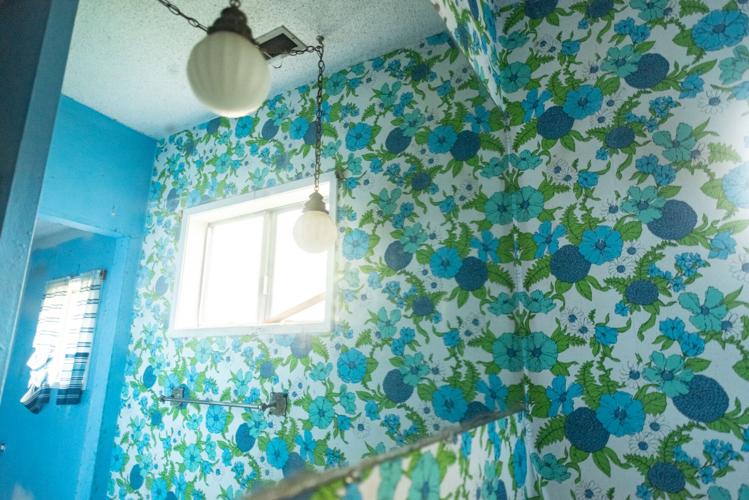 A bright blue bathroom with matching wallpaper is seen at the property. 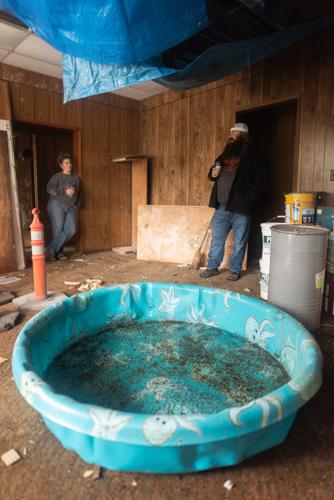 A pool catches water from a leaking roof in one of the rooms at the property.

After heavy autumn rains, water had seeped up from underground and pooled in the basement. Justin Grafton looked at it disapprovingly then moved to flip some overhead lights on. They illuminated a time capsule.

Emily Engdahl tried to call out the resident bat, making a series of high-pitched kissing noises. The couple hadn’t seen “Batticus Finch II” in a while, and she kind of missed him.

Grafton made his way to the center of the basement, putting a hand overhead to a thick wooden beam. The ceiling’s beams, he said, were carved from a single tree, an uncommon practice in new construction. “This building has great structure and bones, it just needs a lot of love,” he said.

Last year, the couple purchased the large Astoria property on the corner of 8th and Madison near Peter Pan Market & Deli after it sat neglected for nearly two decades. They’re hoping to renovate the two-story building into a professional services and maker space and to repair its two existing residential units.

To them, the purchase was personal.

Grafton was born across the street and remembers the space fondly as Clarx Confectionery, the sweets store that occupied it for a few years in the 1960s and ‘70s. His grandmother worked there and his parents have been trying to dig up a baby photo of him sitting at the counter.

Engdahl, who has experience in house remodels, said it has always been her dream to own a large, undefined space, and envisions a unique design with secret passageways and hidden treasures.

The two met in 2016, when Grafton came to take property photos of a house Engdahl was working on. At first, he was oblivious to her efforts to talk to him afterward, but got the hint when she asked him out for coffee.

Now partners, they realized the property they had both eyed for years was within reach.

They are following recommendations from city planners, and hope to renovate it for commercial or professional use. The property would also house Justin Grafton Studios, Grafton’s photography and videography business, along with Blue Collar Collective, the couple’s Astoria-based creative services studio and shop.

“It’s the shoe box on top of the hill that’s been kind of derelict for 20 years, so no one notices it anymore, and we want to fix that,” Grafton said.

The couple acquired the property in June, and have since been clearing out the clutter left inside. One room, with high lofted ceilings Engdahl hopes to hang aerial silks from, had been stuffed with truckloads worth of garbage.

Before becoming a photographer, Grafton worked in construction for 15 years.

Grafton walked through the large property pointing up, down, left and right at asbestos that will need to be taken out. He stopped in one room in the back, which had a calendar on the wall from November 1994, and pointed at the tile floor with half a square pried up. “Not asbestos, surprisingly,” he said.

For now, their vision for the space depends on what the city will allow, and what loans will come through. As of March, they have been delayed by permit processes, and are still seeking a loan. They are also having issues with high costs for construction materials. “We’re locals who have the drive, the gumption, the ideas,” Engdahl said. “But we don’t have the resources of big businesses and corporations.”

Engdahl said their professional and personal skills have helped them through the process. Both single parents before meeting, she said they’re used to budgeting and resourcefulness.

“I feel like that, in particular, is really pushing through sort of this labor of love that we have for the building, and being able to just kind of go at the building’s pace,” Engdahl said. “We’ll borrow money when we can, but if we can’t then we’ll just continue to do it DIY style, and I’m confident in our skill sets.”

There are several other maker spaces in the Astoria and Warrenton area, considered a hub for artists and creators on the North Coast.

The couple hopes to create a maker space for artists that will include a photography studio, an art gallery, a tool lending library and commercial space. It would host artist and maker fairs, and they would like it to be a space for community gatherings.

Grafton and Engdahl believe a new maker space in central Astoria would help serve locals and connect the neighborhood.

Grafton said the revitalization that followed the nearby Peter Pan Market’s comeback inspired them. “I love that the top of the hill is coming back to life, so to speak, and we want to help be a part of that. We want to piggyback off the successes of that and make a building up there that people enjoy looking at when they drive by,” Grafton said.

The century-old building had many lives before its dejected state.

The couple has been researching its past and found records of 26 different uses. Some evidence remains among the discarded relics: A mural of shapes on a wall from a day care, a muddy kitchen showing part of what used to be an apartment and tall planks lining the walls of several rooms used for lumber storage.

There are also the retro remains of a spa. One square room in the building’s center has shower stalls on one side and wooden saunas on the other. The room is taken up almost entirely by a cavernous, bright blue hot tub embedded in the floor and held up by wooden stilts reaching into the basement. The circular hole it made would be perfect for a spiral staircase, Engdahl said, if the basement is salvageable.

At the back of the property, the couple is hoping to keep the two residence spaces intact, moving into one of the apartments themselves.

No matter what the property ends up looking like, they hope it will give something back to the community they love. “The idea of community and my idea of legacy, specifically for that neighborhood, is to also revitalize the sense of connection that people are missing right now with not only the pandemic, but also just general sociological issues that are happening in our communities,” Engdahl said.