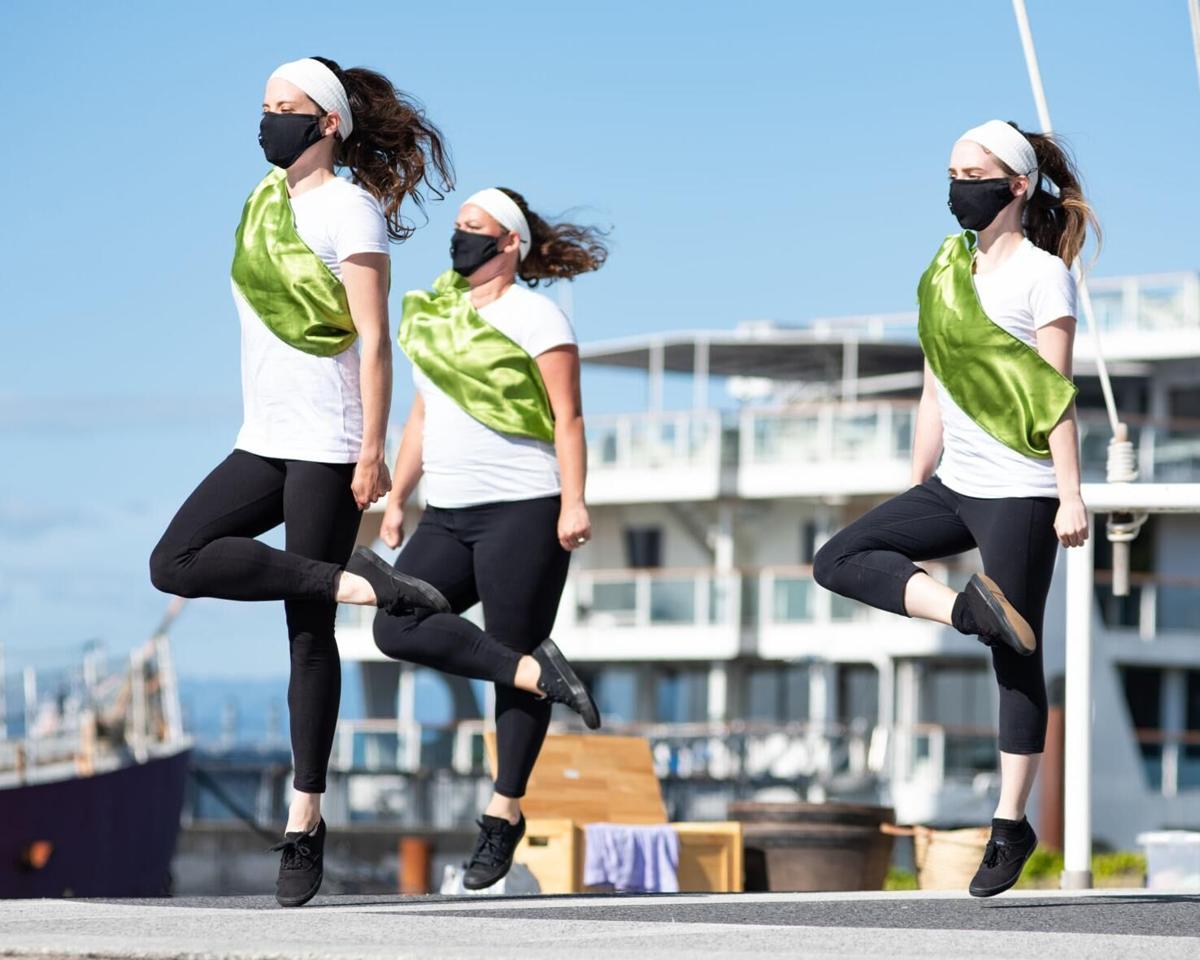 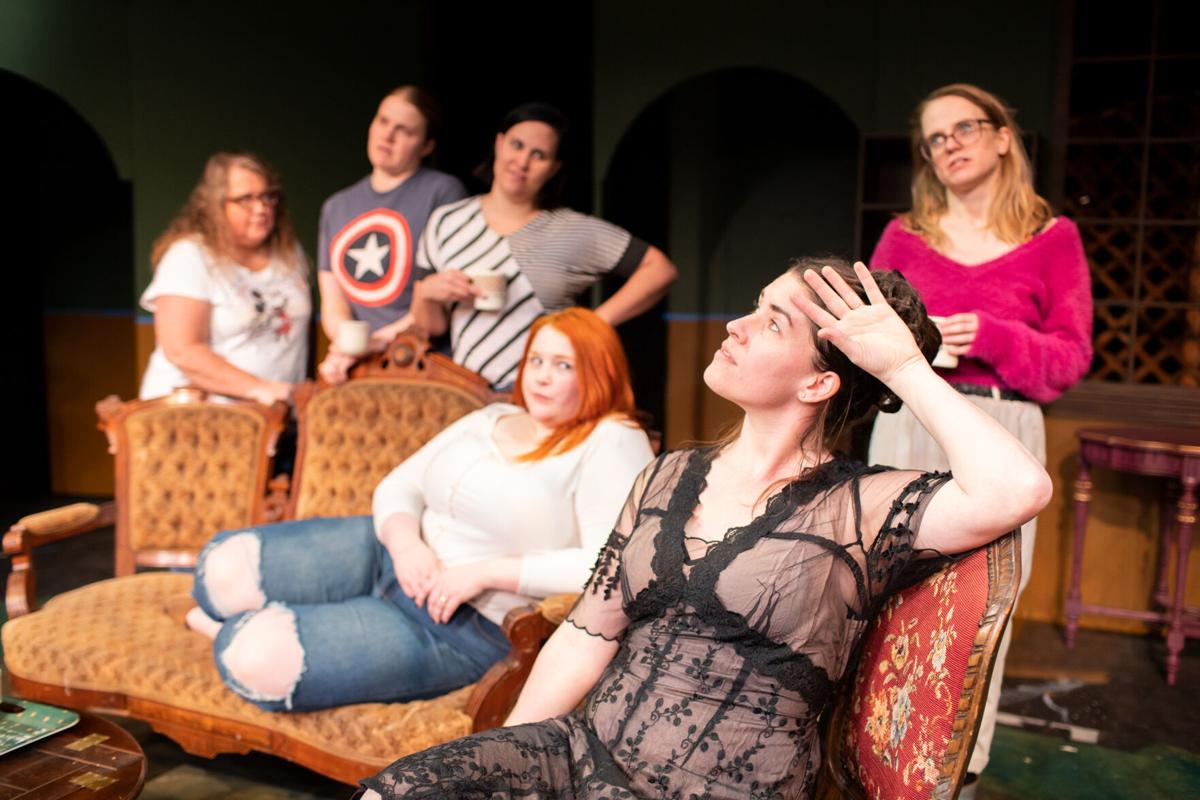 Actors rehearse ‘Play On!’ in early 2020. The play was canceled shortly after due to the coronavirus pandemic.

The Liberty Theatre saw renovations to its entrance in 2020. 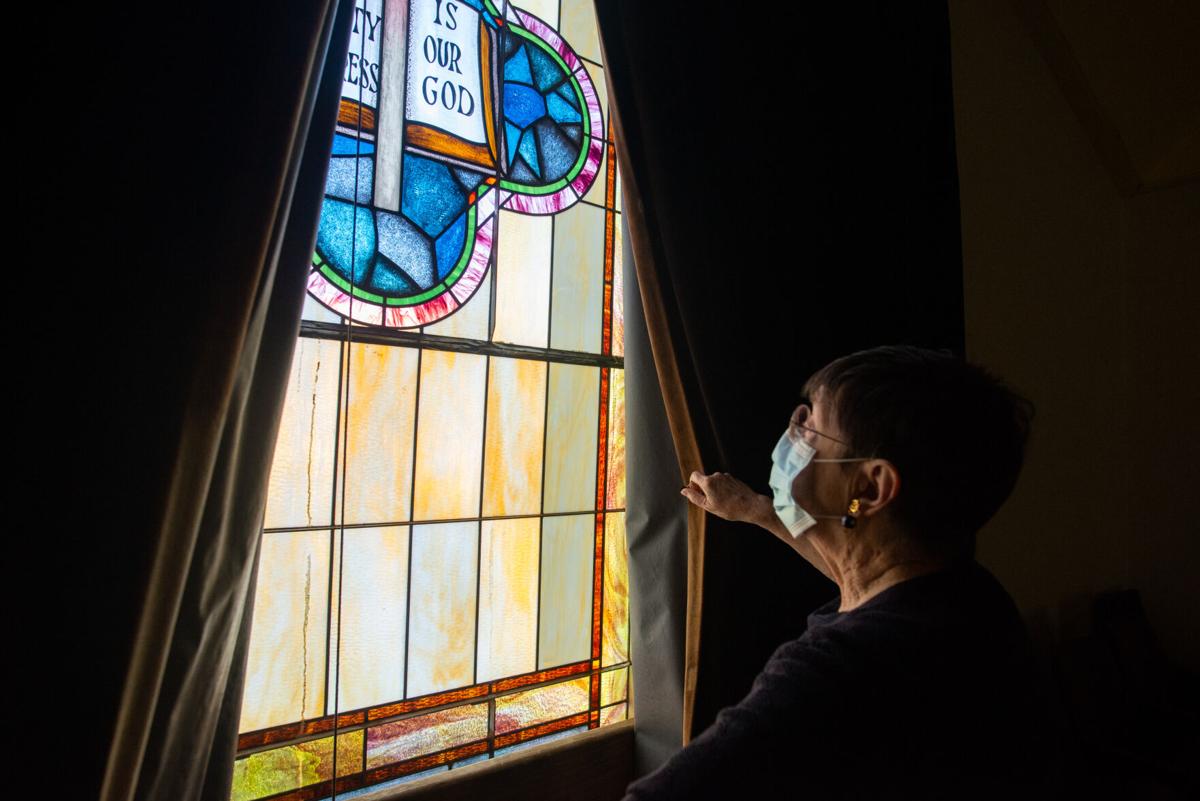 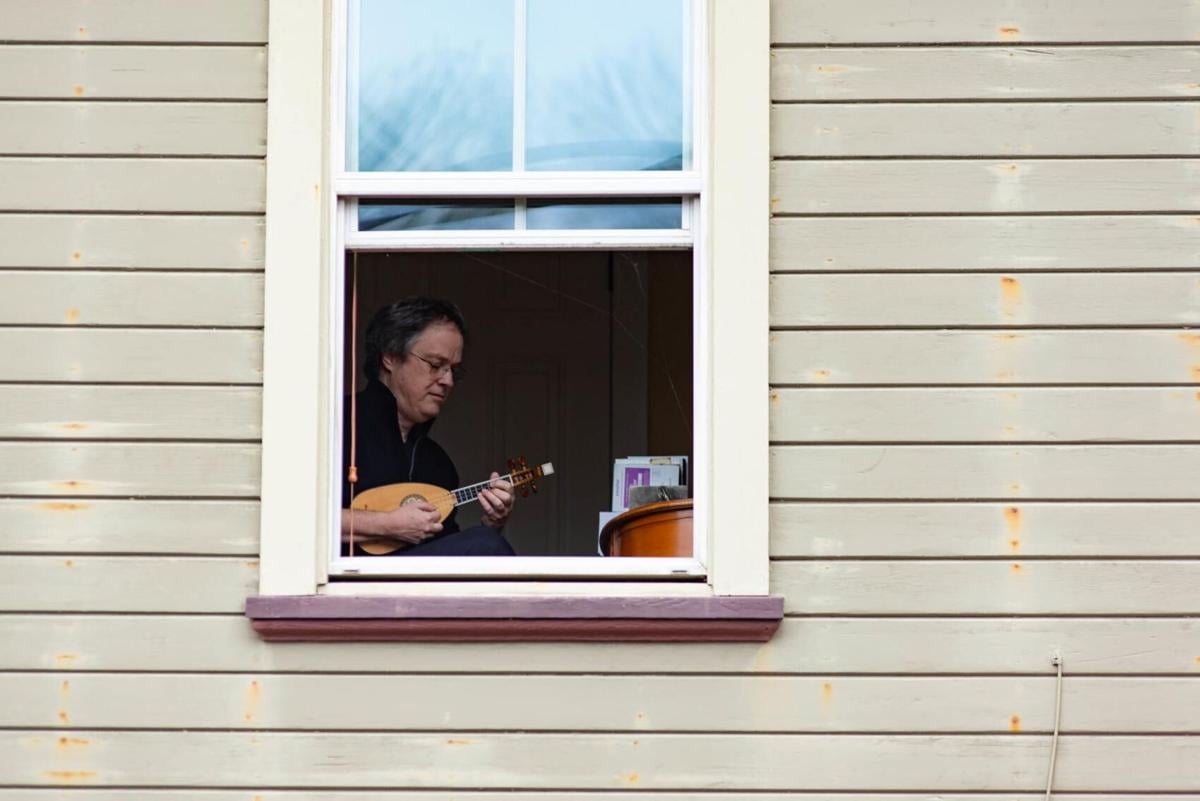 August Watters plays his mandolin from his upstairs window in Astoria. 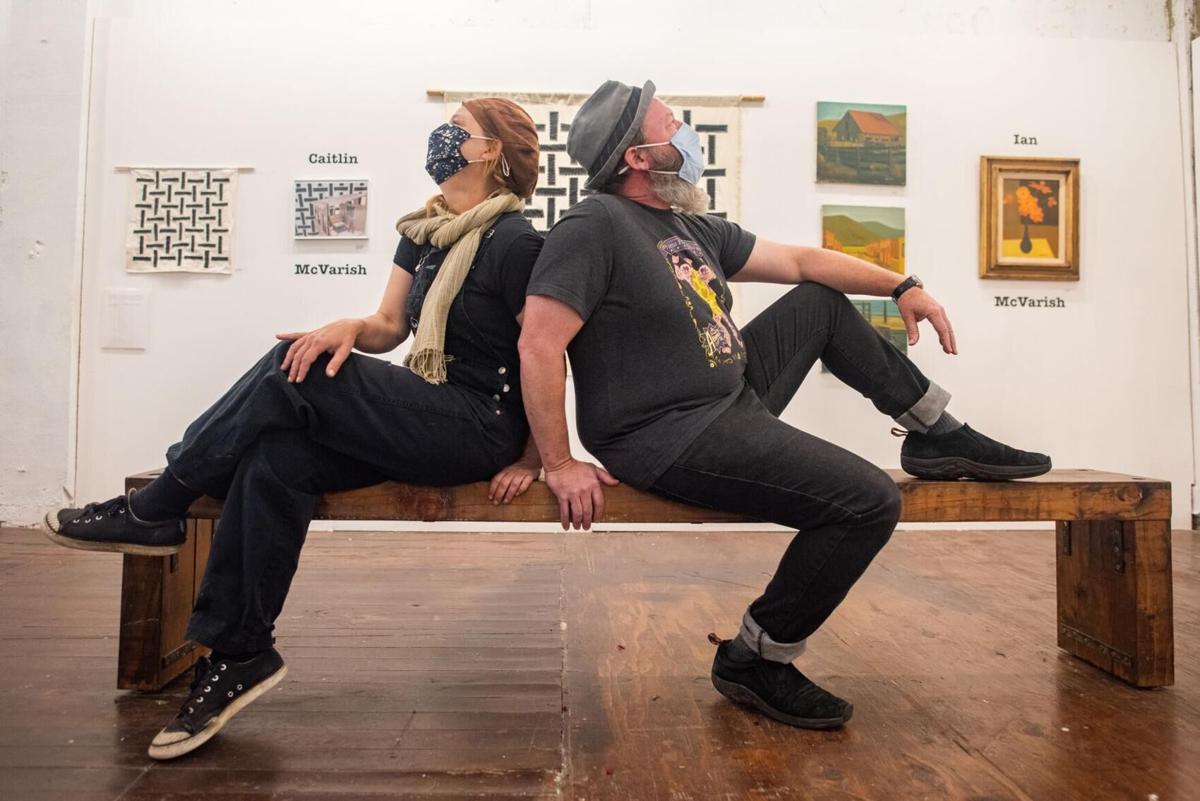 Painter Jill McVarish and writer Chris Minnick in Astoria. McVarish is the owner of McVarish Gallery.

As curtains closed, computer screens seemingly turned on. For the first time in decades, the North Coast experienced a shutdown of the arts community as the coronavirus pandemic closed — or seriously altered — the local culture scene.

Since then, the arts community has adapted to fluctuating health guidelines. Some venues have stayed closed altogether. Others have found ways to host virtual or physically-distanced gatherings.

This spring, the North Coast Chorale held in-person concerts at the Charlene Larsen Center for the Performing Arts — the center’s first live event in over a year. The Liberty Theatre hosted local favorite indie band Blind Pilot for virtual concerts. And this summer, Astor Street Opry Company will host its renowned “Shanghaied in Astoria” musical while the Coaster Theatre will hold outdoor performances of two plays.

Yet no arts group on the North Coast has gone unchanged. Many, if not most, musicians, artists, art galleries, theaters and other venues have seen shifts in revenue as a response to forced closures and canceled events.

Fundraisers, grants, loans and second jobs have helped keep afloat many organizations and creatives. While some arts organizations have closed or become accessible mainly online, many are still around, working to make it possible to share art in person again.

From the Long Beach Peninsula to Manzanita, communities on the North Coast were left scrambling when the governors of Oregon and Washington state announced statewide closures in March 2020 to slow the spread of the virus.

In Manzanita, based on suggestions from volunteers who work full-time as health professionals, leaders at the Hoffman Center for the Arts decided to immediately shut down the center, its art gallery and pottery studio, said Mary Roberts, the center’s board president.

“They very strongly suggested we close immediately. We did close completely, around mid-March, when everyone was still like ‘What does this mean?’ Many of us didn’t understand what this was going to take,” Roberts said. “There was that quiet period where we were like ‘OK, is this going to be over in three weeks?’”

Up north, theater groups were about to open a variety of shows. The Peninsula Players were ready to celebrate the opening night of “A Bag Full of Miracles.” Peninsula Association of Performing Artists closed its run of “Almost, Maine” midway through the season. The Ten Fifteen Theater’s production of “The Weir” was canceled. Astor Street Opry Company’s live shows were put on hiatus, too.

In Cannon Beach, the Coaster Theatre Playhouse was about to open its second show of the year, “Play On!”

“As many were, we were monitoring the news and predictions of what was to come. On March 13, 2020, which was a Friday the 13th — you’ve gotta love it — which was supposed to be the opening night of that show, we decided to postpone that show in the optimistic hope that we’d be able to open it up again soon,” said Jenni Tronier, the theater’s marketing and operations director.

As restrictions increased in Clatsop County and nearby areas, postponing became canceling.

“As things progressed, we decided to cancel our spring 2020 show … We were in full-on hope that we’d be able to get something on stage. As 2020 has, it just never let up,” Tronier said. “At that point, we like many arts organizations were frantically writing grant applications for anything that came available.”

Like most local organizations, fundraisers, grants and loans have helped the theater pay necessary bills.

The Charlene Larsen Center for the Performing Arts also closed down in spring 2020. The 225-seat venue provides rehearsal and performance space for visiting and local music and theater groups.

Partners for the PAC is an arts coalition that runs the center. The center’s executive director, Bereniece Jones-Centeno and Charlene Larsen, the group’s president, focused their efforts during the pandemic on renovating the venue to be safer. Plexiglas panels for the box office; touchless hand sanitizers; touchless toilets, urinals and sinks; and social distancing foot markers are among the center’s additions.

The Hoffman Center was one of the first local organizations to host online events.

The center has adapted many of its programs to run as virtual workshops instead of in-person workshops. In some cases, the center has had students participate from across the country, Roberts said.

The Peninsula Arts Center, located in Long Beach, Washington, has also pivoted to virtual events, like its neighbor, the Sou’wester. Peninsula Arts Center owners Bill and Sue Svendsen have hosted dozens of virtual open mic nights so local performers can connect with each other.

“It’s primarily the regulars from the open mic … We’ve been able to keep our music community a little bit together and engaged,” Sue Svendsen said.

Last summer, when state regulations allowed, the couple hosted an outdoor concert. Like others, they’ve used their extra time working on a pre-scheduled remodel of the building.

“Prior to COVID, we were doing professional concerts where we brought touring musicians from places like Seattle and Portland,” Sue Svendsen said. “We were doing open mics, providing rehearsal space for artists, hosting classes. Most of the ticket price or all of the ticket price went to the artist. We sustained ourselves off the beer and wine sales — that went to zero with COVID.”

In November, the Liberty Theatre hosted a virtual gala fundraiser, featuring Horse Feathers and other regionally-acclaimed musicians as well as Pacific Northwest native and Metropolitan Opera soprano Angela Meade. The theater raised $175,000, most of which went to theater expenses, said Jennifer Crockett, the theater’s executive director.

“People overwhelmingly want to make sure that their theater is OK,” Crockett said.

The theater also hosted a small number of in-person movie showings, which were limited to 50 people maximum in the theater.

During the pandemic the Columbia River Symphony hosted an online prerecorded concert in December made up of the orchestra as well as other local ensembles playing holiday music.

That same month, the Coaster Theatre also made waves with a virtual event of its own when the theater hosted a radio rendition of Charles Dickens’ “A Christmas Carol.” The show featured local actors and writers as well as creators from around the country.

“Because we were doing this on Zoom, they were all able to participate in this, which was really cool. We had people join us from coast to coast,” Tronier said. “There were people who had never heard of the theater, had never heard of Cannon Beach, who joined us as readers.”

Looking forward, many organizations are tentatively planning events but doing so in a way that will make them easy to adapt, in case the events can’t happen in person.

The Charlene Larsen Center for the Performing Arts plans to host online and indoor performances. Partners for the PAC is working on creating videos of performances, dubbed the “Larsen Center Vignettes” to share on the center’s website and social media accounts.

“We’ve never had such a thing happen at the PAC. Anything we’ve had has been because someone showed up and took a video. We figured, ‘Golly, let’s create a space for people to perform, put the videos up and say ‘Look, we’re still alive,’” Jones-Centeno said. “It’s very organic.”

Crockett said events later in the year at the Liberty are expected to be held in-person.

“All of our plans for summer and fall are ‘It needs to be easy to walk away from.’ We won’t be flying musicians across the country. The music scene will become a lot more local,” Crockett said. “We’re being mindful not only of mandates and restrictions placed on us but what the community is feeling.”

The Liberty plans to host all of its scheduled performers whose shows were postponed because of the pandemic. The theater will start filming in-person events once they happen again.

“I think we’ll pull through, Crockett said. “I know now to film everything for future shows in case we want to broadcast them; in case anything like this ever happens again.”

Similarly, organizations like the Hoffman Center plan to continue hosting virtual workshops, even after in-person gatherings are safe again. The center plans to host in-person events starting in July.

“While we’ve been able to offer courses online, there’s no way around the fact that you can’t replace business with Zoom … We just have to be flexible and not get attached,” Roberts said.