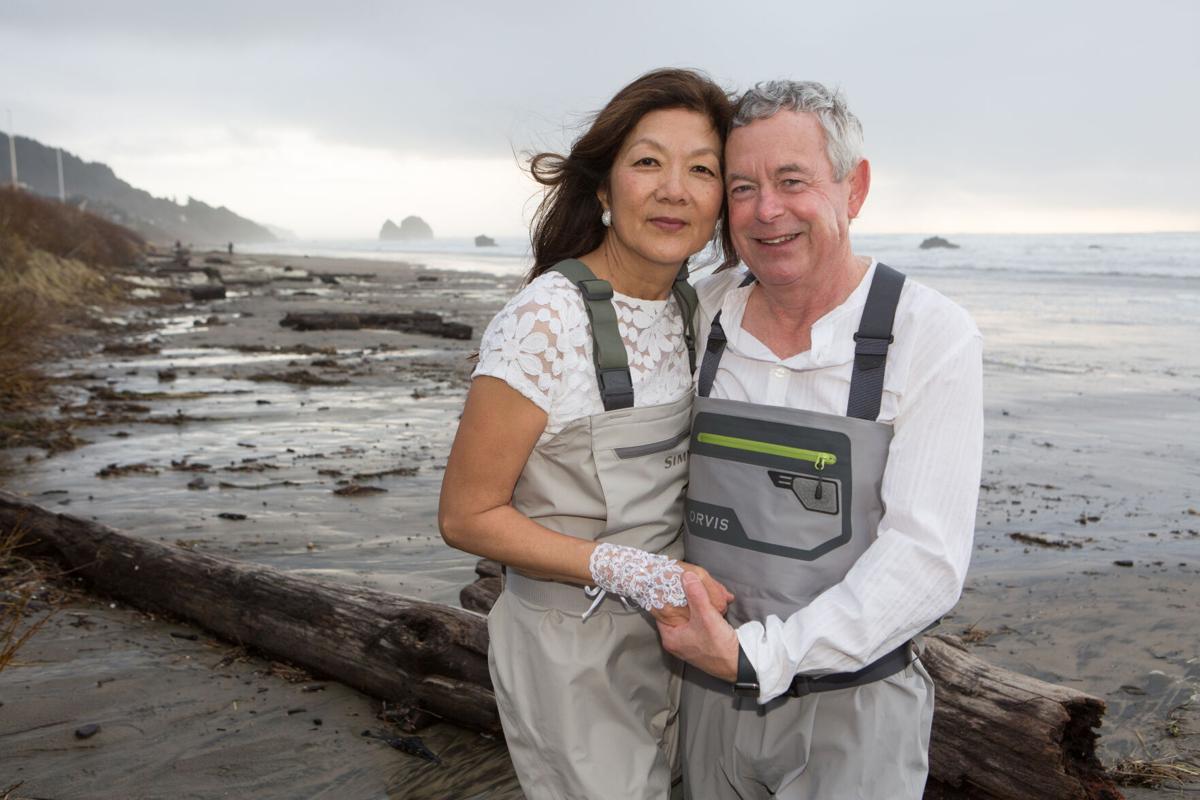 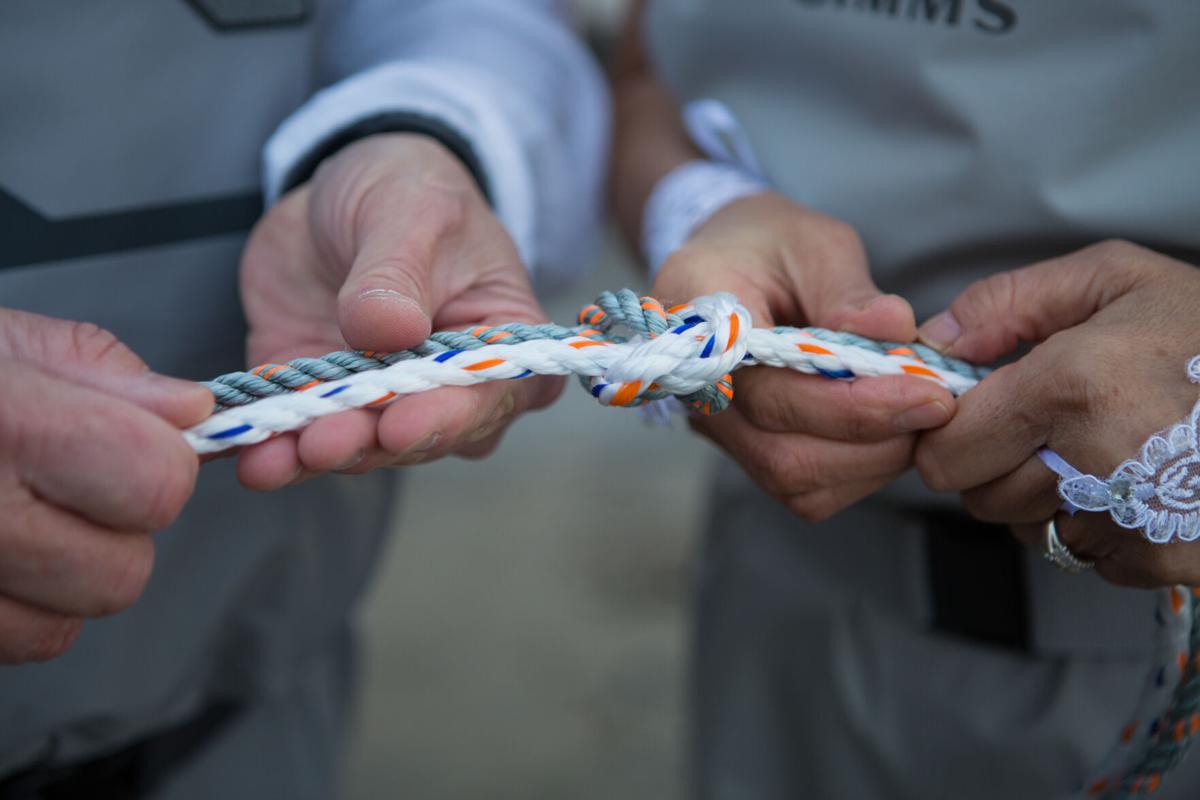 Steve and Jessie Erickson tie a 'lover's knot' during their wedding ceremony. 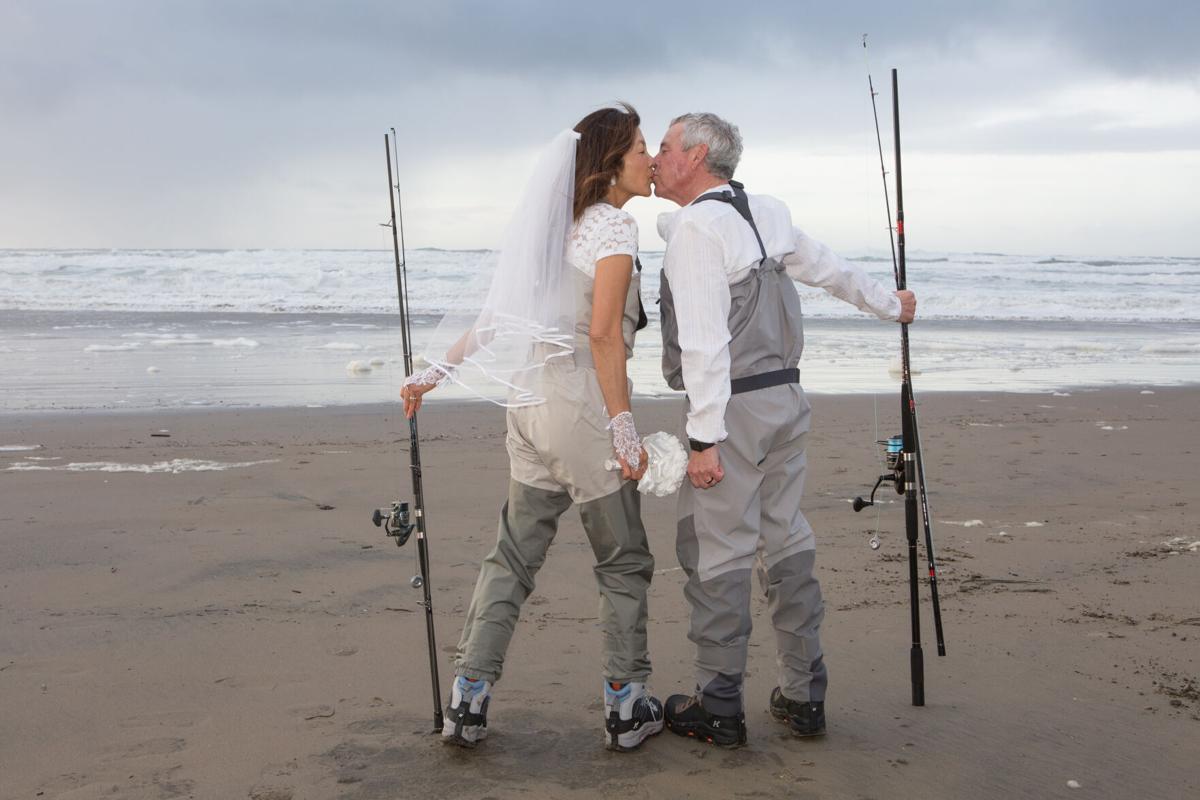 Jessie and Steve Erickson kiss each other after getting married. 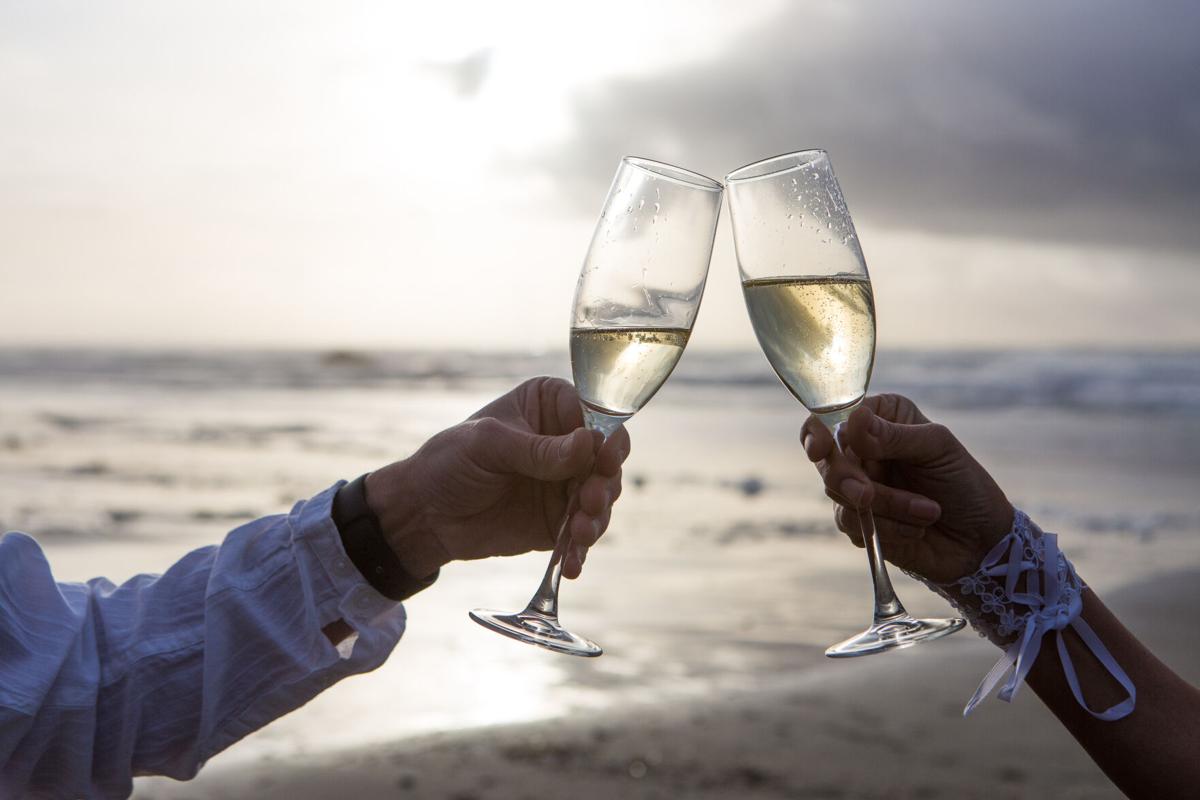 Steve and Jessie Erickson toast after getting married. 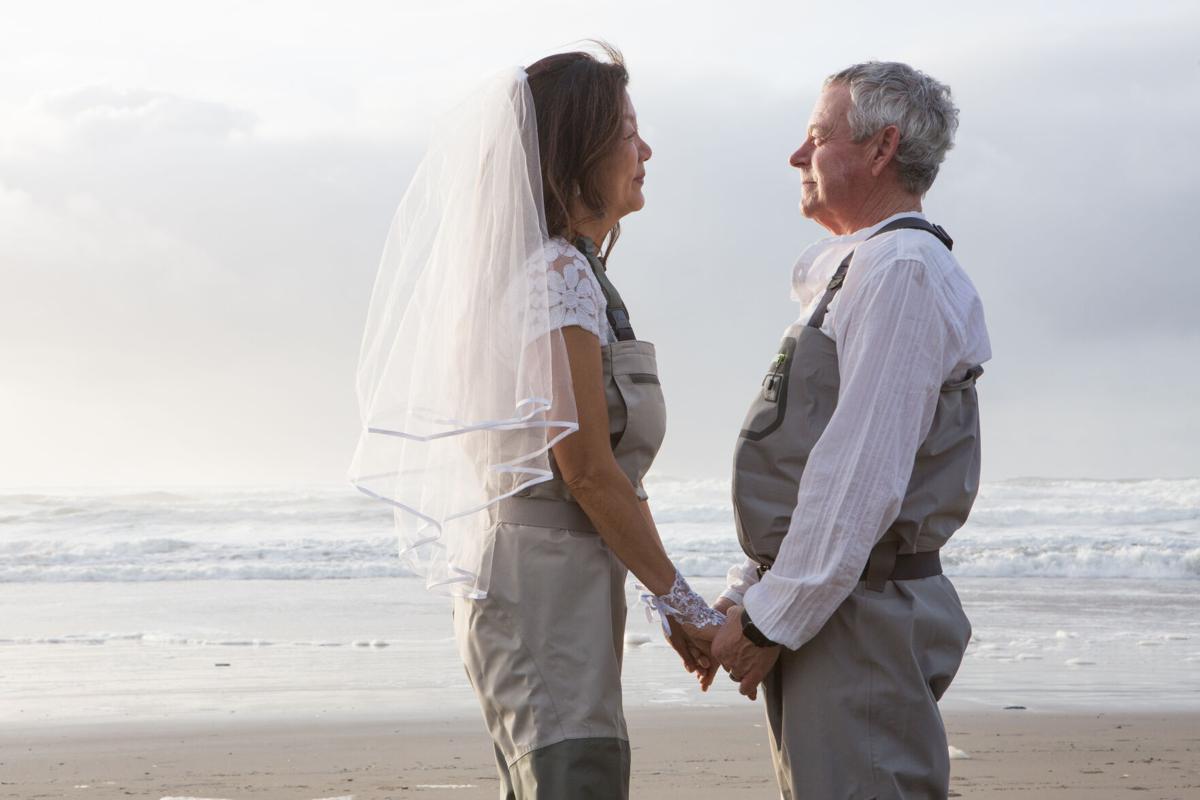 Jessie and Steve Erickson hold hands on their wedding day. 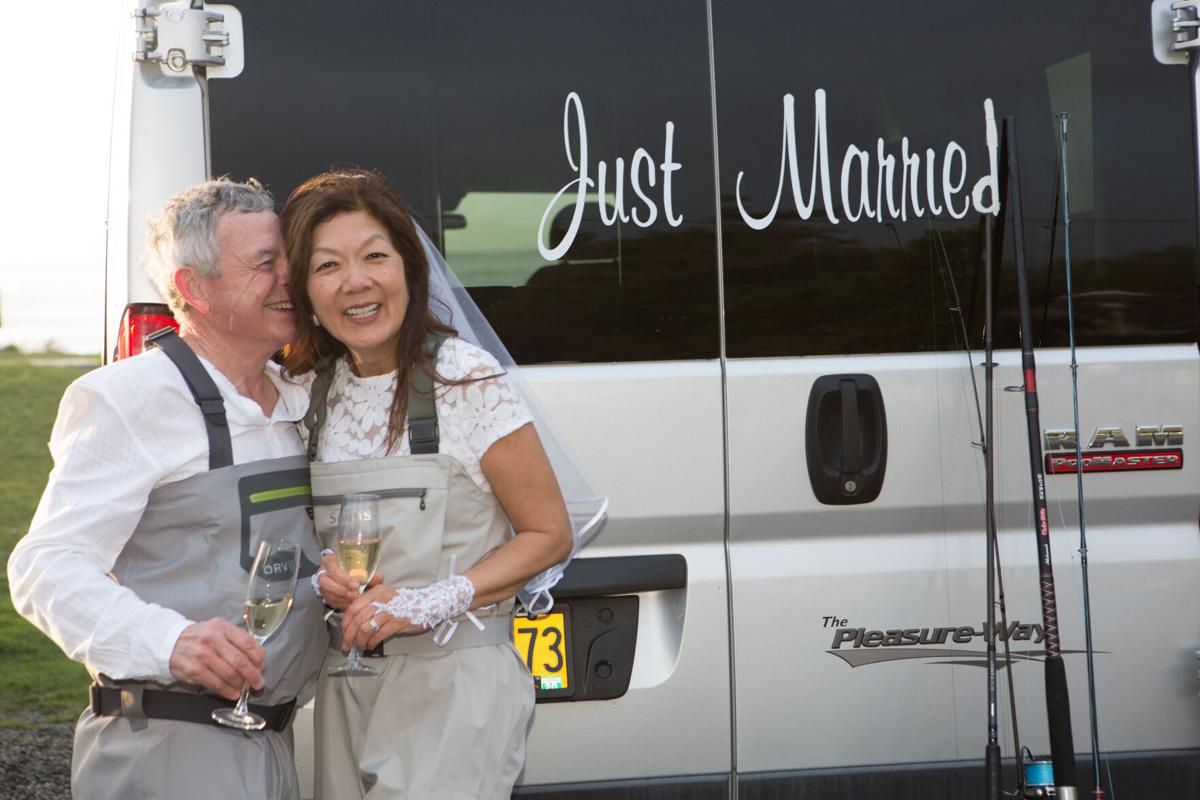 Steve and Jessie Erickson celebrate outside their RV after getting married. 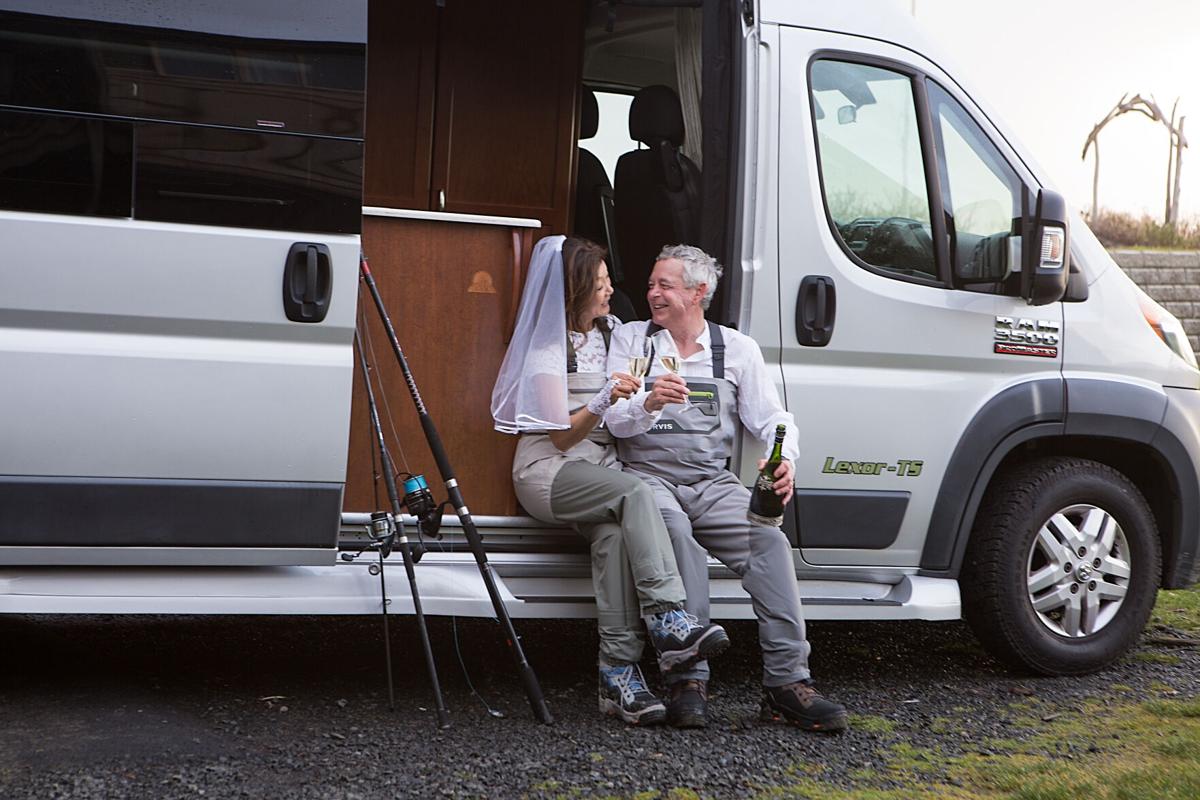 Jessie and Steve Erickson celebrate in their RV after getting married. 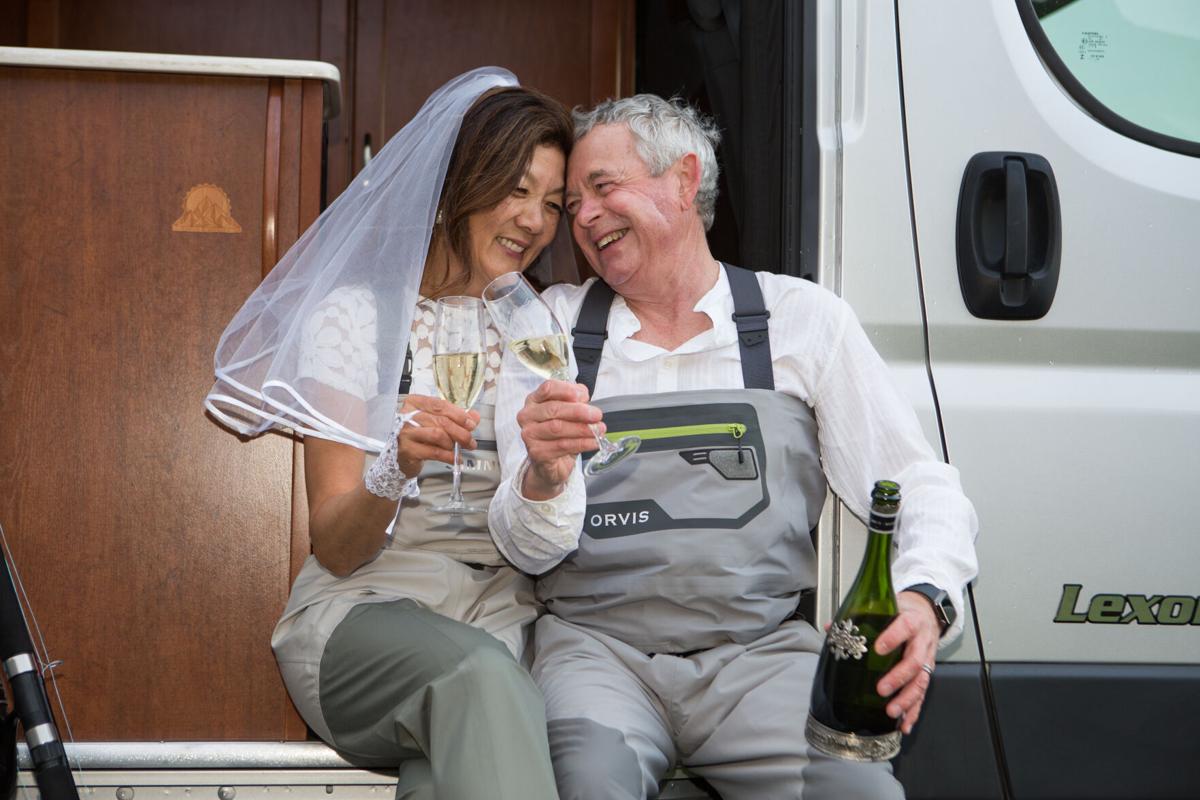 Jessie and Steve Erickson toast after their wedding.

Steve and Jessie Erickson tie a 'lover's knot' during their wedding ceremony.

Jessie and Steve Erickson kiss each other after getting married.

Steve and Jessie Erickson toast after getting married.

Jessie and Steve Erickson hold hands on their wedding day.

Steve and Jessie Erickson celebrate outside their RV after getting married.

Jessie and Steve Erickson celebrate in their RV after getting married.

Jessie and Steve Erickson toast after their wedding.

Dressed in fishing waders and full of laughter, Jessie and Steve Erickson were married in a sweetly intimate ceremony in Cannon Beach — and then promptly went to catch their dinner.

Early in their relationship, the Ericksons, who reside in Cannon Beach, connected over a shared love of sports and being active outdoors. Jessie is an avid runner and Steve enjoys bicycling. They also like fishing, crabbing, golfing and hiking.

As they envision their future together as a married couple, they look forward to being able to participate in those activities all the more. Steve is semi-retired, although he remains a partner of Showers Pass, a popular Northwest lifestyle company that creates engineered cycling gear for racers, commuters and everyday enthusiasts. Jessie retired at the end of 2020.

“This is the beginning of fun,” Steve said.

The Ericksons got engaged in June 2019. Steve presented Jessie with a custom-made, heirloom ring that belonged to his grandmother. They were planning their wedding for several months “but COVID kind of changed things,” Steve said.

No longer did they picture having a large, traditional wedding ceremony — at least, until the coronavirus pandemic subsides.

“We felt it was important to follow the COVID guidelines. We didn’t want to take any risks,” Jessie said.

Instead, they took the opportunity to focus their special day on what marriage truly symbolizes: coming together, exchanging vows and making a longterm commitment to one another. No fanfare, no fuss.

“We could just focus on each other,” Steve said. “Otherwise, a wedding is kind of a performance.”

They were married two years to the day they first connected. Since they both love fishing, they decided to get married in their waders. Jessie joked that she can now get plenty of use from her “wedding dress” instead of stowing it away in the attic. She also wore a veil and lace gloves.

The couple didn’t require many flowers for their intimate ceremony but Steve surprised Jessie with a giant bouquet from Cannon Beach Cottage Flowers. Laurie St. Denis, the floral designer, also threw in two corsages and a boutonniere.

The day before the ceremony, they took advantage of a break in the weather to get pictures with their photographer, Julie Adams, on the beach. On Dec. 18, they exchanged vows before Rev. Christina Irvine, a professional wedding officiant based out of Manzanita.

“It was very meaningful,” Jessie said. “It was just us and the officiant. We didn’t feel like it was about the big to-do.”

The ceremony involved a tradition known as tying the fisherman's knot, also known as a lover's knot. The fisherman’s knot is one of the strongest knots in existence. In the context of a marriage ceremony, it signifies the binding of two people to one another. Although they remain entirely autonomous and independent, each person’s strength, resilience and durability are augmented by the other. When tension is exerted on the rope or it’s tightened, the knot only grows stronger.

In another nod to their shared love of fishing, “One of my vows to Jessie is that I will always bait her hook,’” Steve said.

Instead of inviting people to the ceremony — as they felt it would be hard to choose among their close friends and family — they asked a couple of their neighbors in Cannon Beach to sign the marriage license as witnesses.

Afterward, they celebrated in their RV with champagne. They originally planned to eat out at the Stephanie Inn in Cannon Beach but it had closed temporarily a few days prior because of the pandemic. Instead, they went off to catch crab in Tillamook Bay. They enjoyed their crab alongside filet mignon.

The couple hopes to hold a wedding celebration of sorts this summer and invite their children, grandchildren and friends. Additionally, they’re planning to honeymoon in Hawaii as soon as it is safe to do so.