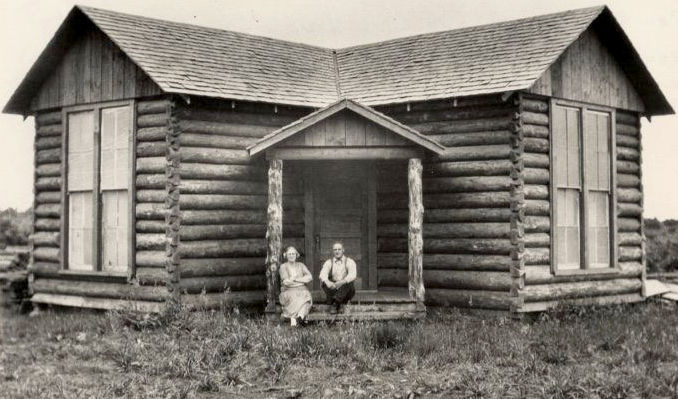 Reverend Rolla J. Phelps and his wife, Stella, shortly after the church’s construction

Reverend Rolla J. Phelps and his wife, Stella, shortly after the church’s construction

This is a story about our county’s history and the perseverance of those who came before us. It is also about those who are fighting to preserve this history in 2020.

It was 1927, Calvin Coolidge was president, and the Oregon Conference of the Evangelical Church sent Reverend Rolla J. Phelps and his wife, Stella, to serve the people of Waldport and Yachats. At first, Phelps came to preach once a month from his home in Summit, a tiny community near Corvallis, but he saw a “great need” for something more. In 1929, Phelps paid $200 to Sir Robert Perks, for two lots in the area which is now West 3rd and Pontiac Streets in present day Yachats.

Using donated local timber hauled down the Yachats River, Phelps and volunteers built the first church in South Lincoln County. The Little Log Church was completed and dedicated in 1930. The 850 square foot building, designed in the shape of a cross, had a total seating capacity of 55. The pews came from a church in Philomath, the bell was from a Portland parish. A one-room cabin was added on a year later to serve as a manse for the minister and family.

The Phelps also taught about 25 children for weekly Sunday School. A vestibule and bathroom were added in the 1930s as the membership grew. Reverend Phelps raised rabbits in a hutch on the church property, much to the delight of his five-year-old. Stella Phelps played the pump organ, even though she was encumbered with a wooden leg.

These were the hard-working people of the Little Log Church in Yachats from 90 years ago.

In the 1940s, Reverend Lymon Myers and his wife came to the Little Log Church. Parishoners fondly remember how he would run back to the manse for a bucket and nets whenever it was smelt season. His wife kept daily records of the menus for family meals, a diary still on display in the Church museum.

Mary Crook, secretary of the board of directors and events/volunteer coordinator for the Little Log Church says the church is filled with photographs and mementos from these early years. In the 20-plus years that Crook has been there, she has heard “countless stories” from visitors who recognize family members or friends in the photographic archives.

In the mid-50s, the Presbyterian Church came to the Little Log Church and the Evangelicals went to a parish in Deadwood, Oregon. The manse was converted into a three-room Sunday School. This arrangement worked out fine until the Presbyterians outgrew the tiny parish, thus construction began on a new church several blocks away. This became known as the “Church of the Agate Windows” with six panel windows, each weighing 350 lbs, constructed on the south-facing wall. The entire community participated by collecting agates and created the panels with the use of a special epoxy. Today this is known as the Yachats Community Presbyterian Church.

The historical Little Log Church was given to the Lincoln County Historical Society in 1968, on the condition it was preserved as a museum. Later it was deeded back to the City of Yachats under the auspices of the Parks and Commons Commission.

In 1992, Lincoln County closed the Little Log Church, deeming it structurally unsafe. Volunteers worked for two years replacing rotted logs, repairing interior damage due to leaking, and placing plywood over the east and south walls. The manse was razed and rebuilt as a 480-square-foot museum space.

The Little Log Church and Museum was back in business.

Mary Crook said the Little Log Church has become a favorite place for special events in the community. For 25 years, the church has hosted a Valentine’s Day vow renewal for local and visiting couples. It now holds two services to accommodate the seating of 40 twosomes. Crook, an interfaith minister, performs the ceremony, as well as the many weddings held there throughout the year.

The excellent acoustics inside the tiny church have made it a favorite place for musical performances, hosting the Yachats Celtic Music Festival, a Eugene Renaissance music band, and countless local musicians.

The church’s board of directors, consisting of Carl Miller, president, Karl Christianson, treasurer, Mary Crook, secretary, Mark Shepherd, Vicki Martin, Katy Otter and Leon Sterner, has worked tirelessly to keep operations intact. But the 90-year-old church will need to be razed and rebuilt due to extensive dry rot, water seepage and a lack of foundation. The board learned it was cheaper to demolish and rebuild in the footprint of the old church than to bring it up to code.

In October 2019, the group formed the nonprofit Friends of the Little Log Church and Museum and began a fundraising campaign, writing to 810 property owners in Yachats. Local non-profits such as the Yachats Big Band, One of Us Productions and the Yachats Agate Festival have contributed toward the $15,000 raised to date.

But everyone agrees that a much larger effort is needed. Miller is applying for a $127,650 restoration grant from the Ford Family Foundation and is waiting for the city to complete its memorandum of understanding.

The City of Yachats put $150,000 from its visitor amenities fund in its 2018-19 capital improvement budget for church restoration work. The plan is to schedule another $150,000 for 2020-21. The anticipated cost to rebuild the Little Log Church is between $300,000 and 400,000, and that includes utilizing the existing windows, some of the flooring and using some logs to form a display. Composite concrete half logs will be used to replace the exterior.

“They will look like the real thing,” Miller said.

Christianson said the idea of rebuilding the church is opposed by some in Yachats, who would rather see a parking lot built on the site.

“We’re in a battle to preserve the history of Yachats,” he said.

Questions about the Little Log Church and Museum should go to Carl Miller at carlandkarl@peak.org or 541-547-4350 or Friends of the LLCM, PO Box 712, Yachats, OR, 97498. He is willing to meet with any individuals or groups to talk about the church’s future.