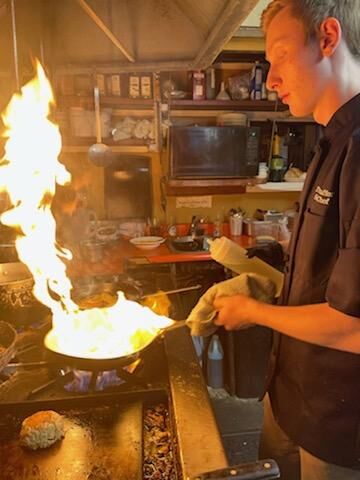 Dru Shaffer working in the kitchen at Newmans at 988. 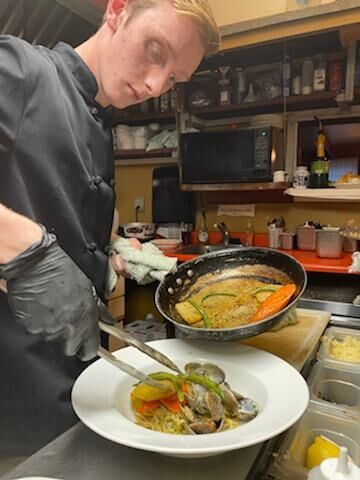 It’s been a meteoric ride for 21-year-old Dru Shaffer, who was recently promoted to sous chef at the prestigious Newmans at 988 restaurant in Cannon Beach.

It’s not often one has the opportunity to achieve a life goal by age 21. For that matter, it’s not often that one knows what direction in life to pursue at such an early age. Not so for Shaffer, who, by age 6 was in the kitchen experimenting with food.

“My mom bought me a cookbook for Christmas when I was 6 or 7,” said Shaffer. “I think it was a Paula Deen cookbook. I was fascinated with the whole process. I couldn’t get enough of it. Mom told me, even then, I was changing recipes.”

As his interest grew, his parents recognized that it was not merely a phase he was going through. In 2017 his mother took him to Clatsop County’s Iron Chef Goes Coastal. It was an event that set his future in motion.

The restaurant is open Tuesday through Saturday.

Chef John Newman was being honored that year, and, serendipitously, Shaffer and his mother were seated nearby. It didn’t take long for his mom to introduce her son to the chef.

“Dru’s mother was really promoting him,” said Newman’s wife, Sandy Newman, who was also present at the Iron Chef event. “I thought, the poor guy, he seems so shy. He was only 16 or 17 at the time, but John saw something in him.”

“I knew this was a special kid,” added John Newman. “He was quiet at first, but the way he started talking about food and the questions he asked overcame any nervousness. His interest in food wasn’t just something his mom wanted him to do. I invited him to come visit our restaurant, take a look at the kitchen, and see how it felt.”

“He encouraged me in every way,” Shaffer said. “I was taking classes in Aberdeen High School’s culinary program and after graduation, I took a few culinary arts classes in Aberdeen that summer. Every once in a while, I’d get a text from John reminding me to keep at it.”

The elder chef has had plenty of experience encouraging young people in the culinary arts, serving as a long-time member of the James Beard Foundation and the first coach for Seaside High School’s ProStart’s inaugural year. He was the culinary instructor at Tongue Point Job Corps Center in Astoria and returned as instructor to Seaside’s culinary program where his students won the Oregon ProStart competition, sending them to nationals two years in a row.

“Dru’s a bright young man,” said John Newman. “When I see interest in a youngster, I don’t expect them to do a lot. Just pay attention, and when the opportunity arises, take it. I’d tell him, ‘Come on down to Cannon Beach. We’re ready when you’re ready.’”

“I hesitated,” said Shaffer. “But I had to give it a try. Even though I knew it meant starting out as a dishwasher.”

“Dru handled himself well,” said John Newman. “He didn’t grumble about menial jobs and soon was in the kitchen helping out as a prep cook.”

“I don’t like to overpromote someone, but Dru was an unusual young man,” said John Newman. “When our chef de partie, Eric, left, I thought Dru could handle it. I asked if he wanted to take the reins.”

A chef de partie is a station chef or a line cook in charge of a particular area of production in the kitchen and may be in charge of supervising assistants or working alone.

“I wasn’t sure,” said Shaffer. “That was a lot of responsibility.”

“Dru wasn’t entirely confident he could handle being in charge and on his own,” said John Newman. “But when he heard we were going to hire someone else in the position, who would be above him, he stepped up. He came in early and wanted to try new things. He was definitely ready to be our new chef de partie.

“This last year was a challenge with covid regulations, but we got through it. Now that we’ve reopened, it’s been great working with Dru. His enthusiasm is infectious. It’s so fun.

“Dru has an excellent palate and such a deft hand for someone so young. His command of the kitchen keeps our French-Italian cuisine at its consistently high level. In three short years, it’s remarkable. But he’s deserved this. We’re so grateful to have him.”

“It’s so very cool to watch John and Dru,” added Sandy Newman. “When they take a break, they’re reading cookbooks and sharing ideas. On the line together, they’re so focused. The food looks beautiful and tastes beautiful. I think this is the best crew we’ve had. We don’t have to fret so much about work. We just live it.”

“It seems like a miracle,” John Newman said. “Summers can be so stressful, you just have to grind it out. Being a chef is physically challenging — a job for the young and mentally sharp. When I started out, I was that guy. Now, I like to delegate as much as I can. I love giving people the reins. And Dru has taken it on.”

The Newmans laughed when asked about a future that could include Shaffer eventually taking over Newmans at 988.

“In the next few years, he’ll be leaving us,” said John Newman. “I want for him to have the experience and training that I was fortunate to have at CIA (the Culinary Institute of America) in New York and in Europe.”

“I definitely have the desire to go to one of the culinary institutes,” said Shaffer. “Maybe New York or Portland. Then I want to invest time to absorb more, to learn different wines, to travel and be immersed in European cuisine.”

“We have so many connections, we can help him,” said John Newman. “Maybe after more schooling, we can find him an ideal situation at friends in Italy.”

“We’re both so excited to see him grow and succeed,” said Sandy Newman.

“It’s wonderful,” said Shaffer. “I was scared to grow up. They’ve made my path so much easier. I’m so very appreciative. So thankful. Crazy.”