Visitors inspect the Peter Iredale shipwreck at Fort Stevens State Park. The Peter Iredale ran aground on Clatsop Spit on Oct. 25, 1906. Embedded in the sand, the wreckage is one of the most visible and accessible of the Graveyard of the Pacific. 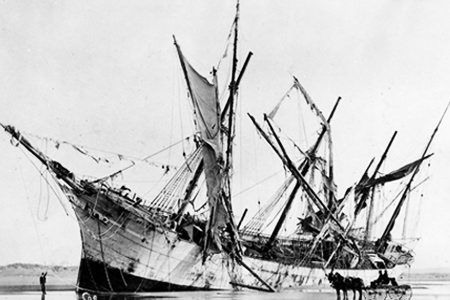 The Peter Iredale, run aground

Visitors inspect the Peter Iredale shipwreck at Fort Stevens State Park. The Peter Iredale ran aground on Clatsop Spit on Oct. 25, 1906. Embedded in the sand, the wreckage is one of the most visible and accessible of the Graveyard of the Pacific.

The Peter Iredale, run aground

1. Peter Iredale (ship): This four-masted steel bark famously ran aground on Clatsop Spit near Fort Stevens on Oct. 25, 1906. The vessel was built in Maryport, England, in 1890 by R. Ritson & Co. Ltd. Measuring 285 feet of steel plates upon an iron frame, the Iredale would prove to be the largest ship Ritson ever constructed.

The wreck occurred on the ship’s ninth voyage to the Oregon Coast, all flown beneath the Union Jack. Having departed Salina Cruz, Mexico, on Sept. 26, the Iredale reached the mouth of the Columbia River before dawn on that fateful morning.

En route to Portland to drop off 900 tons of sand and gravel ballast and pick up a supply of wheat bound for the United Kingdom, captain and crew lost control of the ship around 6 a.m. while waiting for a bar pilot. A strong gale emerged, forcing the bark into the breakers on a collision course with Clatsop Spit. Upon impact, three of the ship’s masts split, leaving only the jigger mast aloft. There were no major injuries, and the crew immediately shot off flares. They were retrieved by a team from the station at Point Adams.

According to the Oregon History Project, Captain H. Lawrence offered his shaken crew a bottle of whiskey, saluted the ship, and said, “May God bless you and may your bones bleach in these sands.” By the next morning the shipwreck had already become a spectacle gathering onlookers, and it has continued to be a popular tourist draw for more than 100 years as the winds and tide have noshed those bones Captain Lawrence spoke of, leaving only the bark’s steel hull and iron frame to rust in the wet sand and salt.

While there is some debate, general consensus concludes that Iredale means “Valley of the Bright River.” It is a locational British surname, a variant of Airedale, which can be traced back to West Yorkshire and to the winding route of the River Aire and the Aire Valley.

The river slices wildly above and below ground through the green valleys of Yorkshire before being trained by canal through downtown Leeds to empty in the River Ouse in the village of Airmyn, which comes from the Old English meaning “river mouth.”

The word Aire is of disputed origin, but historical English sources from the 19th century often translate this as “bright river” or “strong river,” and it may have been adopted from either a Celtic source or an Old Norse term. Dale means “valley” and is first noted in 12th-century Middle English, having arose from the Old English dæl. The surname is first recorded in church records from the 16th century.

What is firmly established is that the infamous bark is named after Liverpool’s Peter Iredale, the British shipping magnate and partner in the firm Iredale & Porter Ltd that commissioned the building of the ship.

Having gone to sea at age 17, Iredale amassed a generous fleet throughout the second half of his life, often christening his vessels to memorialize the important things in his life, including his wife and two of his daughters, his wife’s maiden name and the Cumbrian, which refers to the coastal region of Cumbria where he was born. He also owned a ship named Astoria.

Iredale died Oct. 26, 1899, and did not live to see his eponymous vessel run ashore a day prior to the seventh anniversary of his passing.