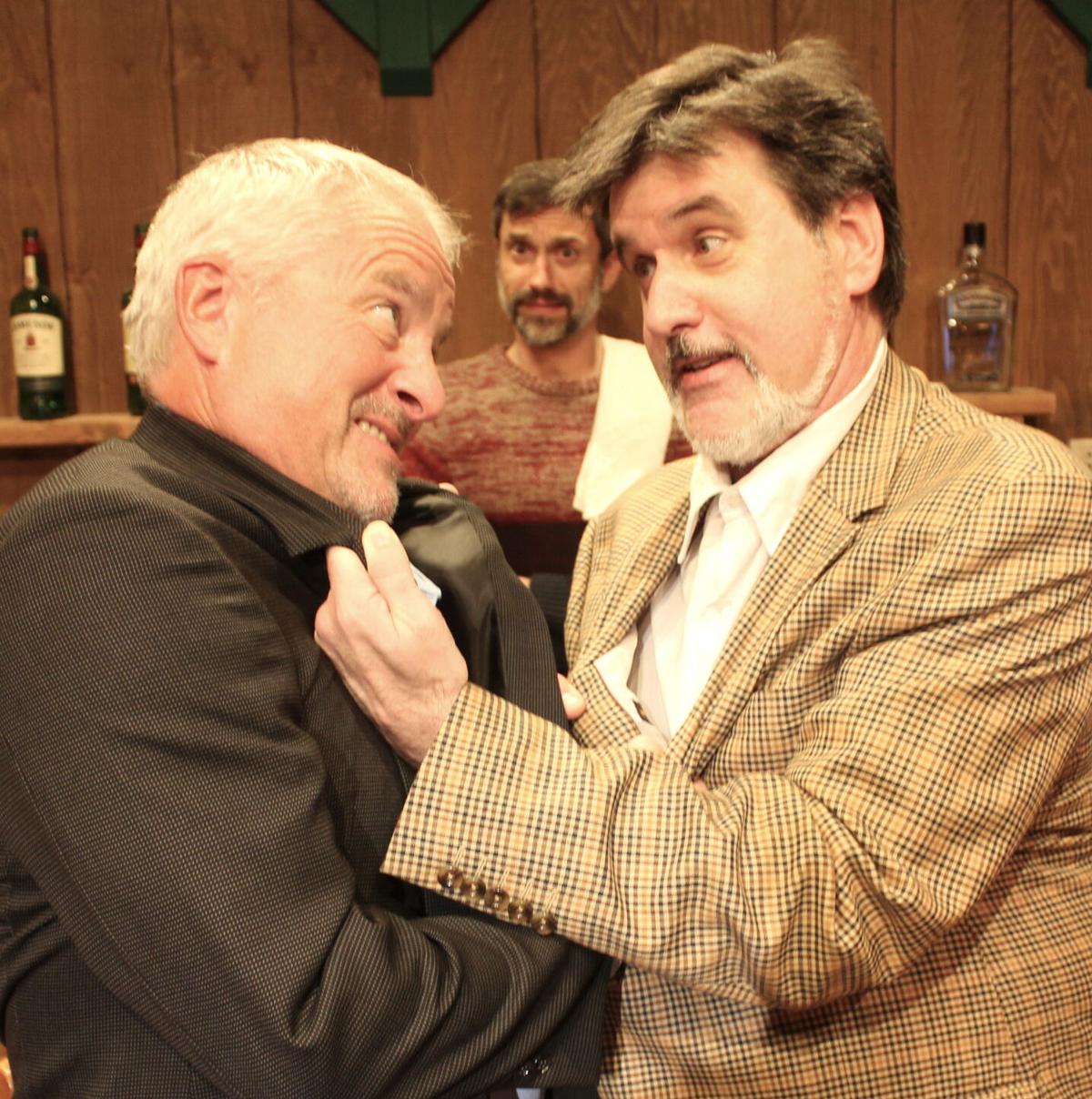 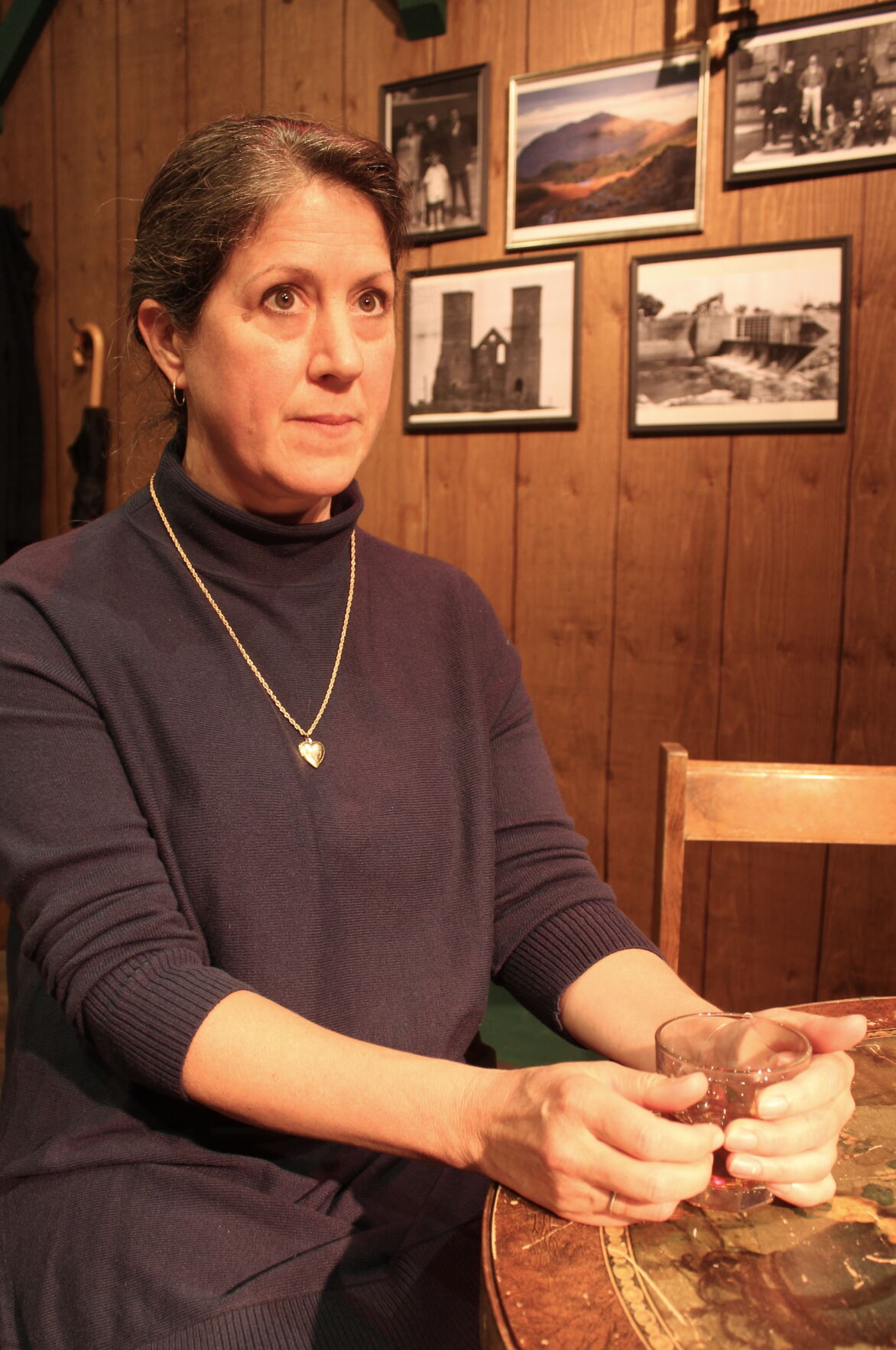 Nancy Montgomery plays a stranger from the city who is trying to overcome a trauma in her life. Her appearance at the rural bar forms the key moment of ‘The Weir,’ by Irish writer Connor McPherson.

Theater folk are understandably upset when a play opens for just one performance then closes.

It happened to director Karen Bain and her cast for “The Weir.”

The play opened at the Ten Fifteen Theater in downtown Astoria in mid-March 2020 exactly as pandemic shutdown regulations began.

It played to one paying audience. Around the North Coast that week, organizers of all indoor activities realized they needed to protect the health of their performers and audiences.

“It was slowly dawning on us what was happening and we decided we had no choice to shut it down,” Bain said.

Now the climate has improved somewhat, the storefront theater is abuzz as the cast gears up to open Friday, with shows that will run the next three weekends at the theater at 1015 Commercial St.

Into their midst comes another local, who has left for the city and made a success in business.

When a mysterious woman from Dublin arrives, it is soon clear she has a secret.

McPherson wrote the piece in 1997 for a British theater that highlights new plays. Later, he penned “The Seafarer” which Bain directed for Pier Pressure Productions some years ago. She sought another opportunity to stage work by McPherson, who one reviewer labeled “an Irish Chekhov.”

“I like his storytelling and his characters,” Bain said. “He has his finger on the current of life. I like his use of language and his ability to create a sense of dramatic awareness.”

Due to the gap of time between the two runs, the cast has changed. Stephen Wood has stepped in as the bar owner and William Ham will play a customer who operates a garage. Returning to the show are Bennett Hunter as his assistant, Mick Alderman as the successful businessman and Nancy Montgomery as a woman who has suffered a life-changing trauma.

“I am thrilled,” Bain said, inspired by a new synchronicity. “We have got new people so we have a new beginning. We have worked really hard. The combination of this script, with these people, in this place ....”

Though disappointed that the first run was postponed, Montgomery was excited when rehearsals resumed.

‘I think the Irish are great storytellers — that’s part of their tradition.”

“It’s going to be a different show with different actors,” she said. “It will shift the energy, but it’s so real and fun to watch the relationships between the mates in the pub evolve and deepen.”

Her character’s appearance amid the drink-fueled storytelling creates a centerpiece to the drama.

“She is trying to heal, but nobody knows her,” Montgomery said. “It is all guesswork for them. They are in a small town and I am from the city.”

When the play was publicized last year, Bain and cast members were learning to speak in dialects that contrasted the urban and rural. Since then, Bain noted that an Irish resident of Astoria recommended clarity over authenticity.

“I think the Irish are great storytellers — that’s part of their tradition,” said Bain. “And such a musical accent. We are all charmed by an Irish accent.”

“The play is sweet and rich, and I hope the language is very natural and also eloquent,” Montgomery said. “But it’s all vernacular — it doesn’t read as poetry! But it is beautifully written.”

A play by Connor McPherson, directed by Karen Bain.

Tickets are $20 and can be purchased from the Liberty Theatre box office in Astoria or at the door.

Audience members must wear masks and show proof of vaccination.