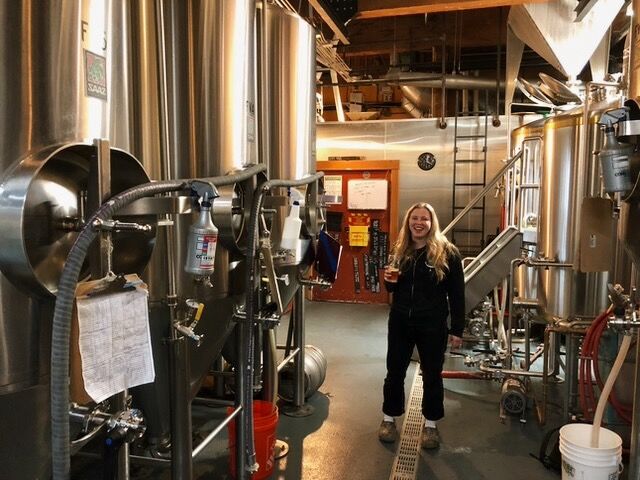 Christy Richards stands by a tank filled with an IPA of her making, brewed in honor of International Women’s Day. 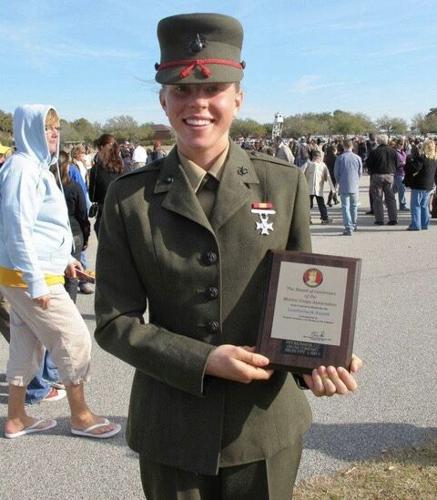 Richards in February 2012, after graduating from boot camp. 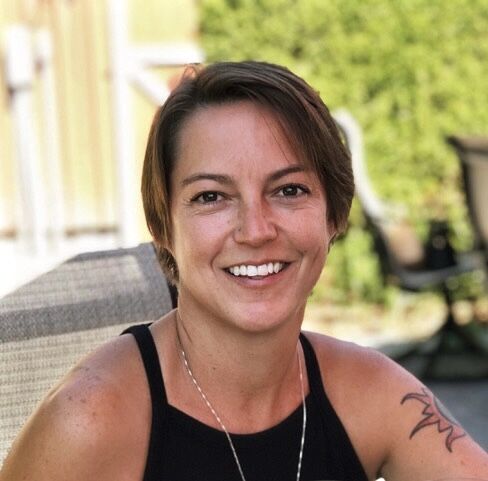 Christy Richards didn’t set out to be anyone’s role model, and she certainly didn’t ask for any help breaking barriers. As one of a small handful of women who work as professional brewers on the North Coast, Richards flashes her radiant smile when asked if her status is a burden. In her view, it’s an opportunity.

“I would like to empower other women, that’s my priority,” Richards said. “I want to be a stepping stool, to give someone that confidence they need, or the pep talk they need, to help them be in the beer industry,” she added.

Richards checked another box recently when her employer, Fort George Brewery in Astoria, signed off on her recipe for a unique West Coast style IPA marking International Women’s Day. She then started her eight barrel batch on that day in March, flanked by other women who work at the brewery. The beer, dubbed Rye Side of History for its earthy rye malt, is on tap now.

Richards is part of a wave of women getting into brewing, a trade long dominated by white men. Oregon Brewers Guild executive director Christina LaRue is hopeful that diversity is growing among brewers, but challenges persist, from workplace harassment to the “old school mentality that it’s a man’s job,” LaRue said.

Challenging that notion, LaRue’s organization has begun subsidizing internships at breweries for women and other minority groups in the industry. The program is called “Mashing Barriers,” drawing on a beer-making term. There are other positive signs. The Pink Boots Society, a nonprofit, has emerged as a valuable support network. And the number of women entering fermentation science programs at colleges, including Oregon State University, is on the rise. “You’re starting to see more and more women coming into the beer industry,” LaRue said.

For Richards, making beer wasn’t her first experience braving a male dominated profession. Born in the Chicago area and raised in Oregon, after graduating from an all girls’ Catholic high school in Portland, she enlisted in the U.S. Marine Corps. Athletic and powerful, Richards made the grade, serving for four years before moving to Astoria.

Her career at the Fort started inauspiciously, on the canning line. But there was something about the brewery, the sights, sounds and smells, that intrigued her. She began learning about beer making. When a weekend shift for a brewer’s assistant opened up, she grabbed it.

Two years later, in 2018, she was promoted to brewer, the only woman in Astoria to have that title. She admits that it was a lot of anxiety at first. “I didn’t want to screw anything up. It was nerve-wracking, but I just loved it,” she said.

She’s now entrusted with a significant slice of the brewery’s annual production, thousands of barrels. She makes beer in a variety of styles, often with creative ingredients. Asked if she’s found her passion, Richards nods enthusiastically. “I definitely think so. It naturally fell into place, right place, right time,” she said, “now I want to keep growing.”

The brewtopia known as Bend Brewfest will be held on May 13 and 14. Tickets are $40 in advance or $50 at the door for both days and include drink tokens and a souvenir mug. More than 65 breweries will be pouring their best.

In Astoria, Buoy Beer Co.’s Frühlingsfest, German for spring festival, will be held on May 14. the event will pay homage to lagers of all stripes. Buoy’s specialty brews and offerings from guest breweries will be on tap. The event runs from noon to 8 p.m. and features live music.

Fort George’s Lupulin Ecstasy Festival is slated for May 21. The all day event, also including live music, is a celebration of zesty hops and IPAs at the brewery's waterfront facility.

William Dean is an author with a passion for craft beer. His suspense novels, “The Ghosts We Know” and “Dangerous Freedom” are available at Amazon and in bookstores. Column ideas? Contact him at williamdeanbooks@gmail.com.