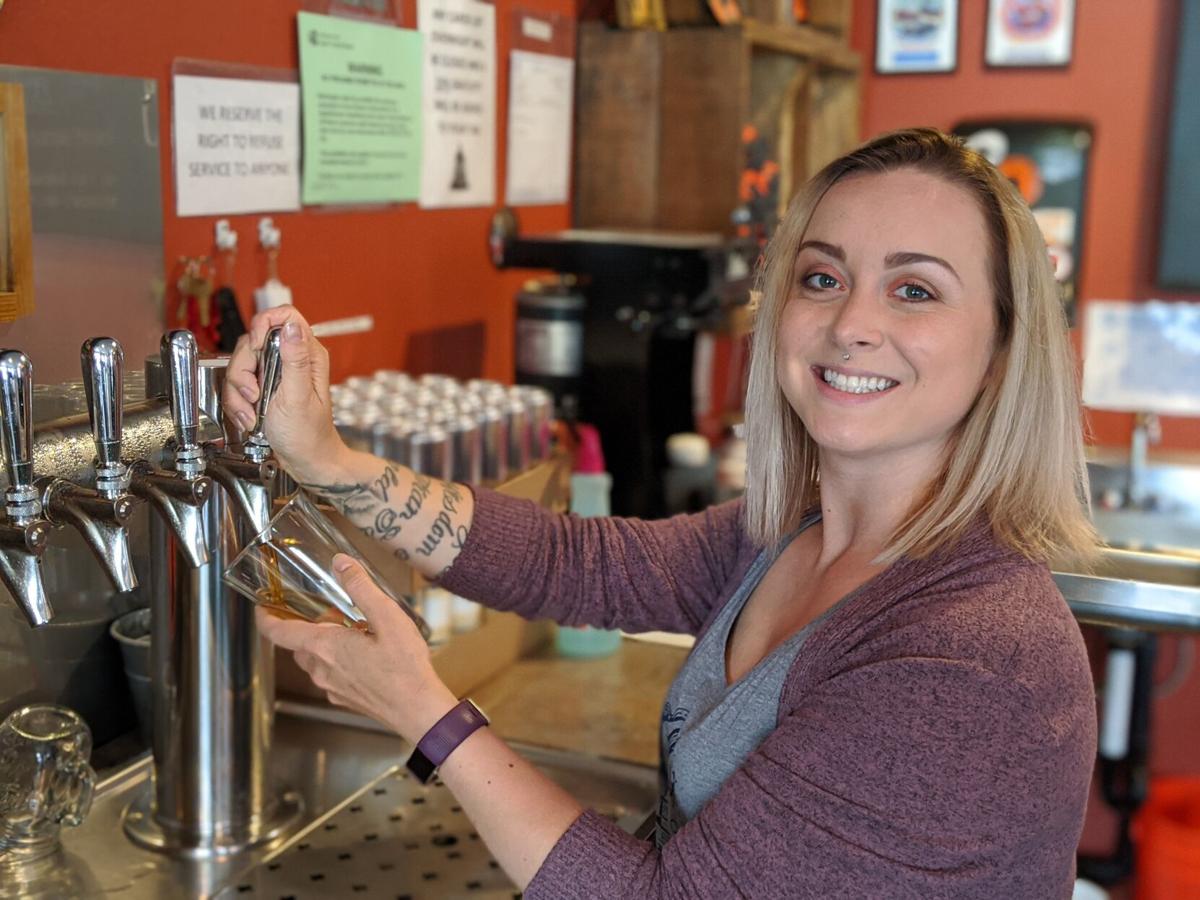 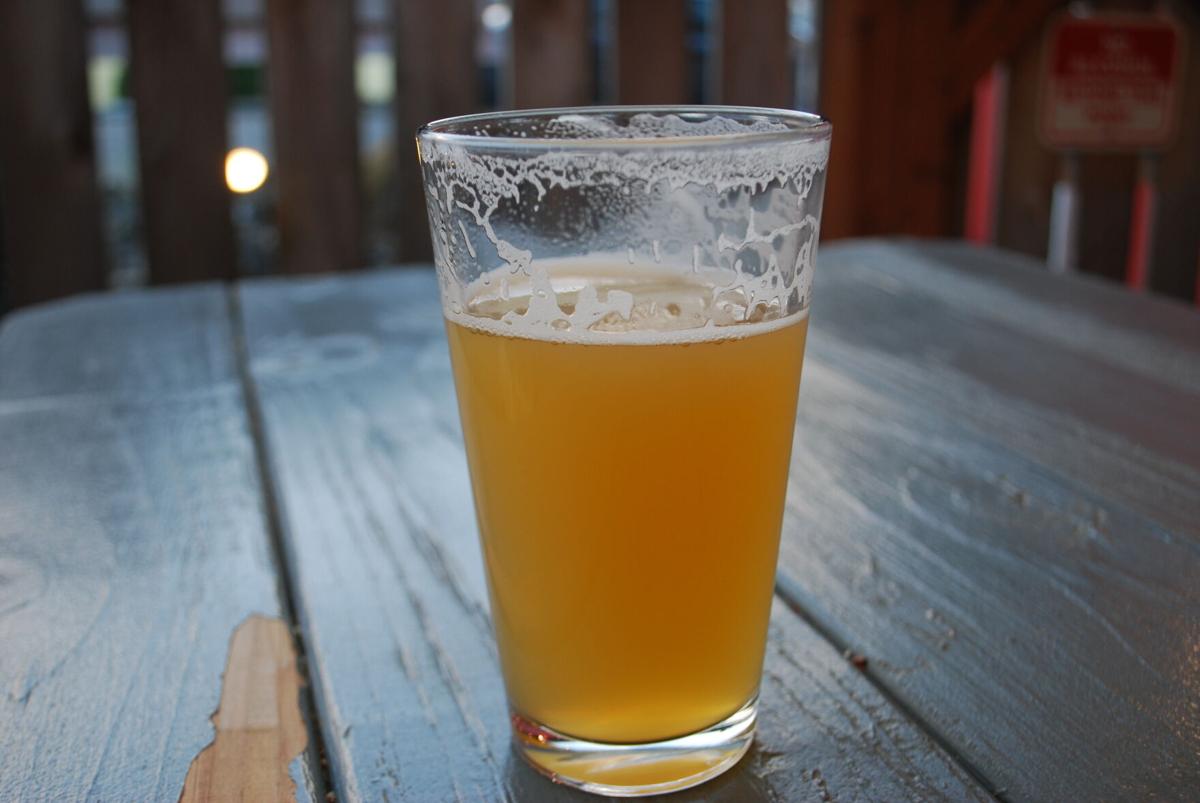 The Yara Peach Passionfruit Sour is one of North Jetty Brewing’s newest brews. 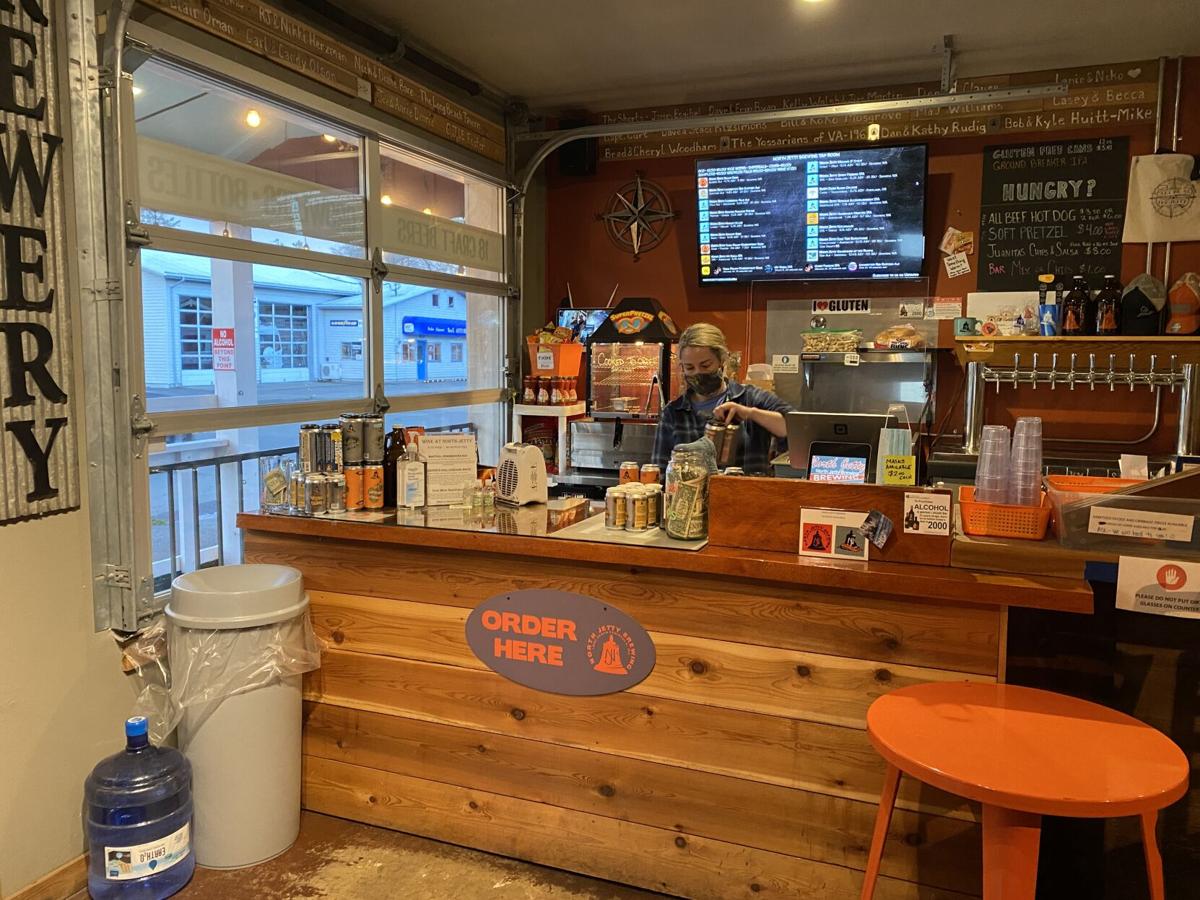 Beertender Kristen Hammond has worked at North Jetty Brewing for over six years.

The sense of community in the small craft brewery is clear from the moment you walk in the door. The names of North Jetty’s “founders” — local residents, business owners and visitors who helped open the business — cover the taproom’s walls.

Owners Michelle and Erik Svendsen are proud of the business, which has evolved since starting in 2012 as a component of local restaurant The Lost Roo, to their current location with a 10 barrel brewhouse and taproom of their own.

“In any given week, returning customers and locals are probably 40% of our sales,” Erik Svendsen said. “For instance, right now I can name everybody out there (in the taproom), first name, last name, what they do for a living … It’s first and foremost a gathering spot.”

The owners are done expanding for now. The size of the small brewery allows them to maintain a deeper connection with customers.

“Kirk’s really good,” Michelle Svendsen said. “He sits in the taproom and talks to customers and asks them questions about the beers on tap, what they want to see.”

Cans of North Jetty beer are in regional distribution through several distributors including Fort George Brewery, which has helped get their brews out to restaurants, retailers and customers during fluctuating COVID-19 restrictions.

“We’re also distributing in Portland, so we’re constantly listening for the new things coming around,” Hurd said. “We’re reading and looking at where the market is going and what hops are coming out next. Because we’re a small brewery in a small community, I think of my customers … What would they order one or two pints of and what can I do to push their tastebuds a little bit to do something new and different that they’ll also enjoy? We take all those things in and formulate a recipe and then let the yeast do it’s thing.”

While good beer can speak for itself, customer service and the folks pouring in the taproom also make this brewery the unique community watering hole that it is.

“I don’t think I would know half the people in this community if I didn’t have this job,” said beertender Kristin Hammond.

“Becca always thinks about the big picture, what’s best for North Jetty Brewing,” Erik Svendsen said. “In the time she’s been here, (she) has really grown into a customer service person. It’s more than ‘My job is serving beer.’ She thinks ‘My job is to create an atmosphere for the customer so that they want to be here.’”

“She’s very good at customer service but she’s also looking out for the safety and wellbeing of all customers,” Hurd said.

Under current occupancy restrictions in Pacific County, the taproom can seat 12 people. A few tables outside and a walk-up order window stretch that capacity.

“We put that in three or four years ago now. It used to be stuffy in here. We put that in without knowing that it would be the reason we could stay open at one point,” Hammond said.

Customers can walk up and order drinks and food to-go through the pull-up window. Options include cans, growler fills and hot pretzels.

The Svendsen’s eyes are set on safely reestablishing the taproom.

“We have our seventh anniversary party in mid-April,” Michelle Svendsen added. “Last year, it was just Erik and I handing out cupcakes from the roll-up window and selling beer from there because the taproom was closed.”

Erik Svendsen and Hurd are planning a “lucky number seven” beer for the anniversary.

“We’re glad to still be open and thankful for the people that have been here,” Hurd said.