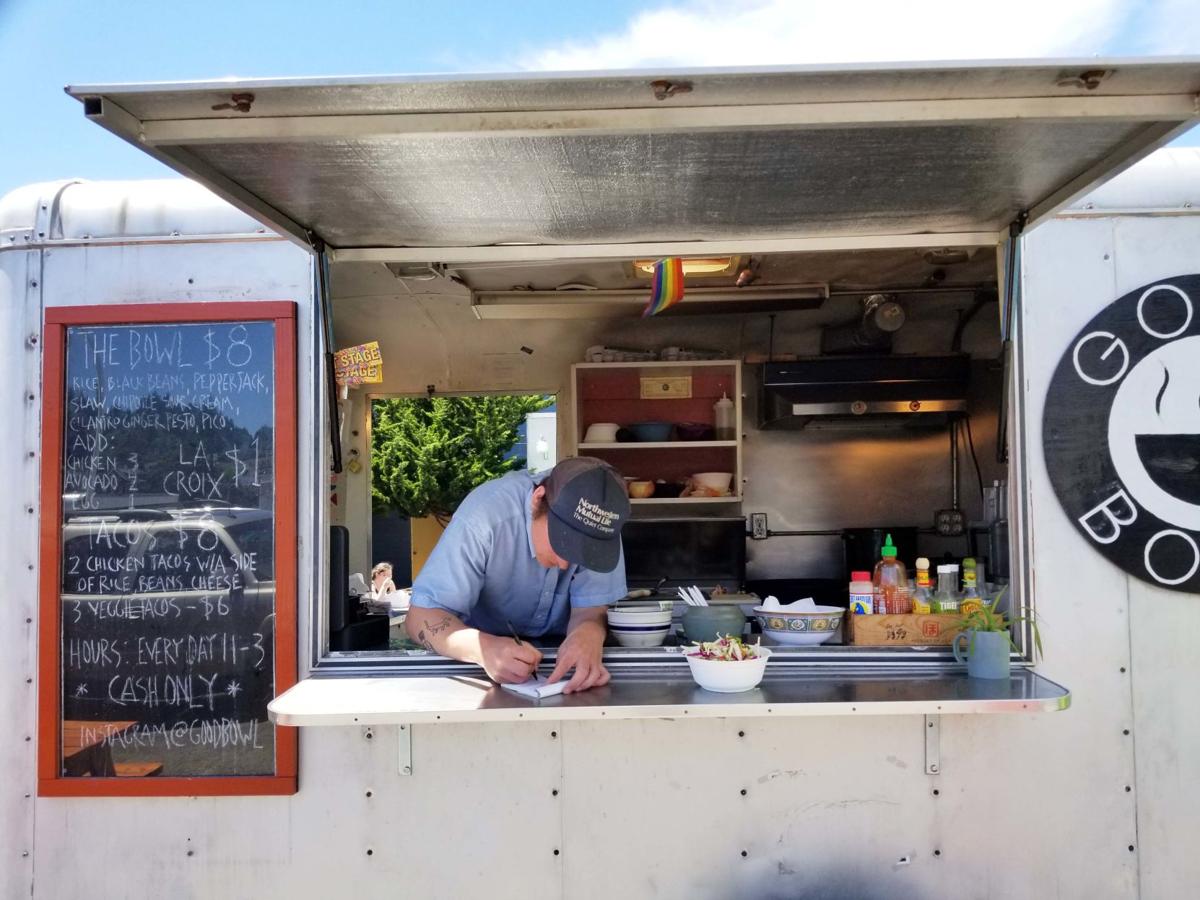 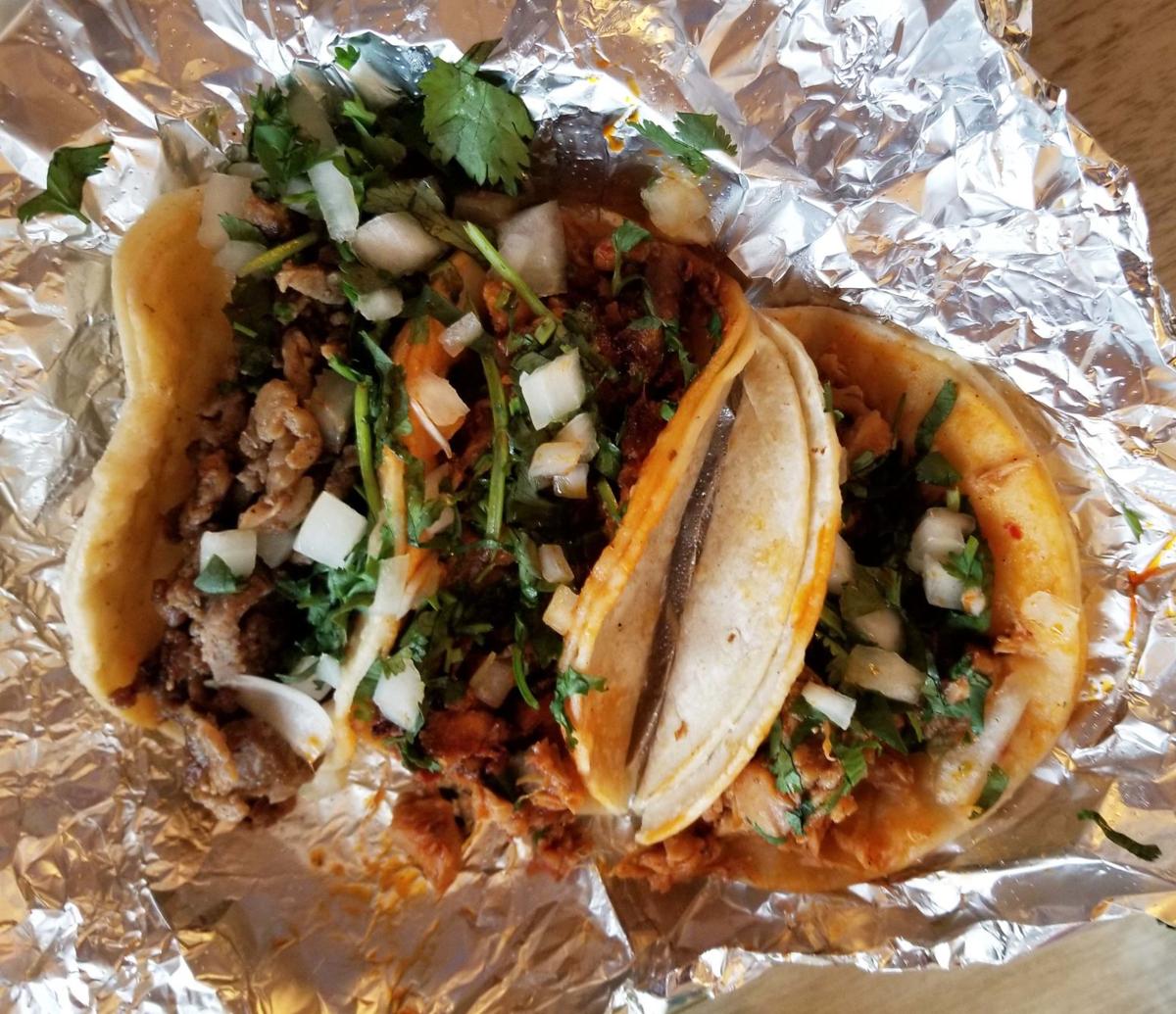 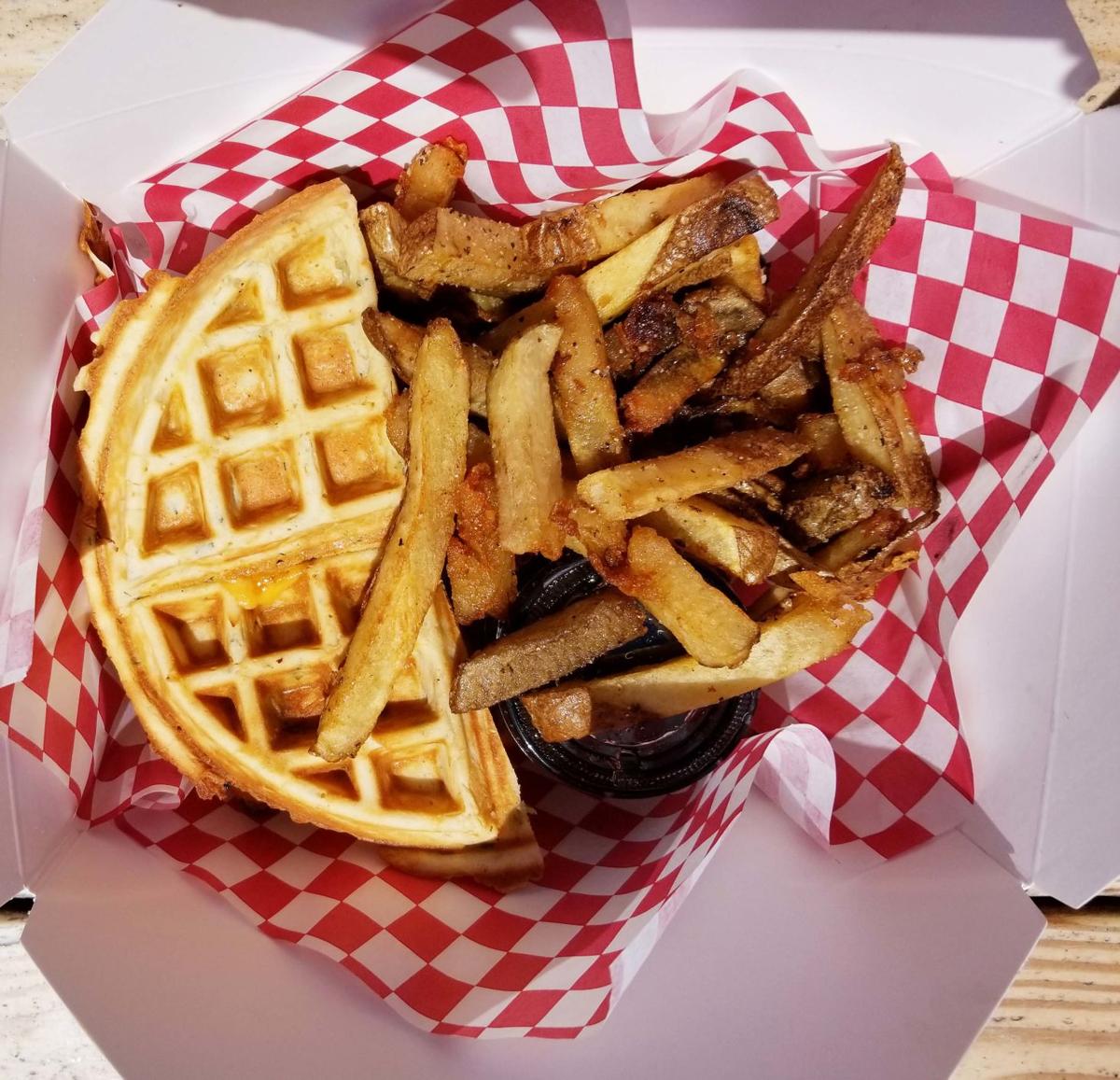 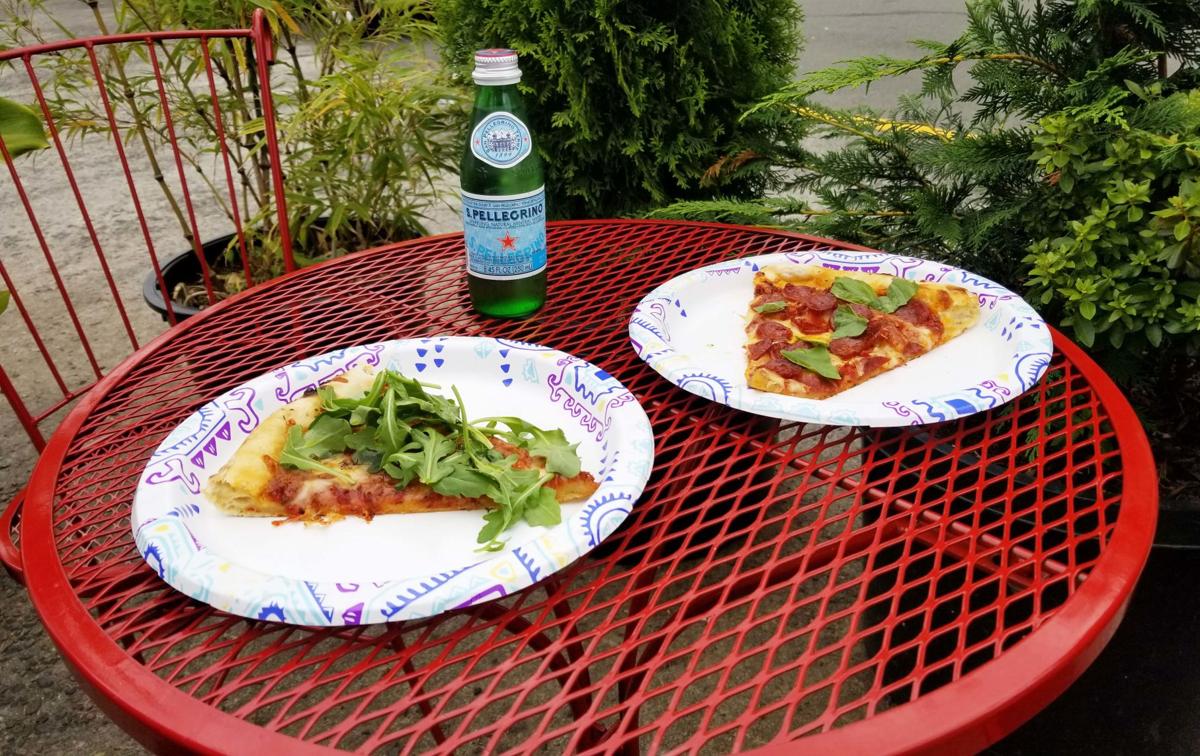 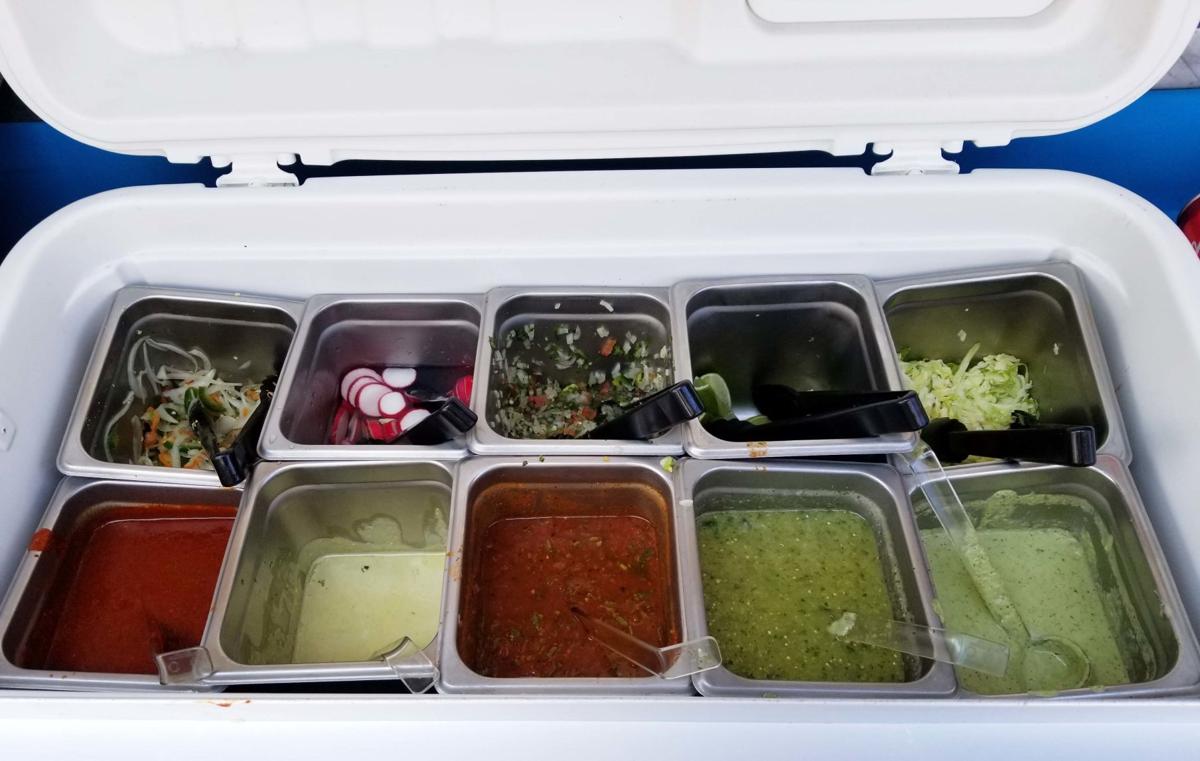 The salsa bar at Tacos Pelayos. 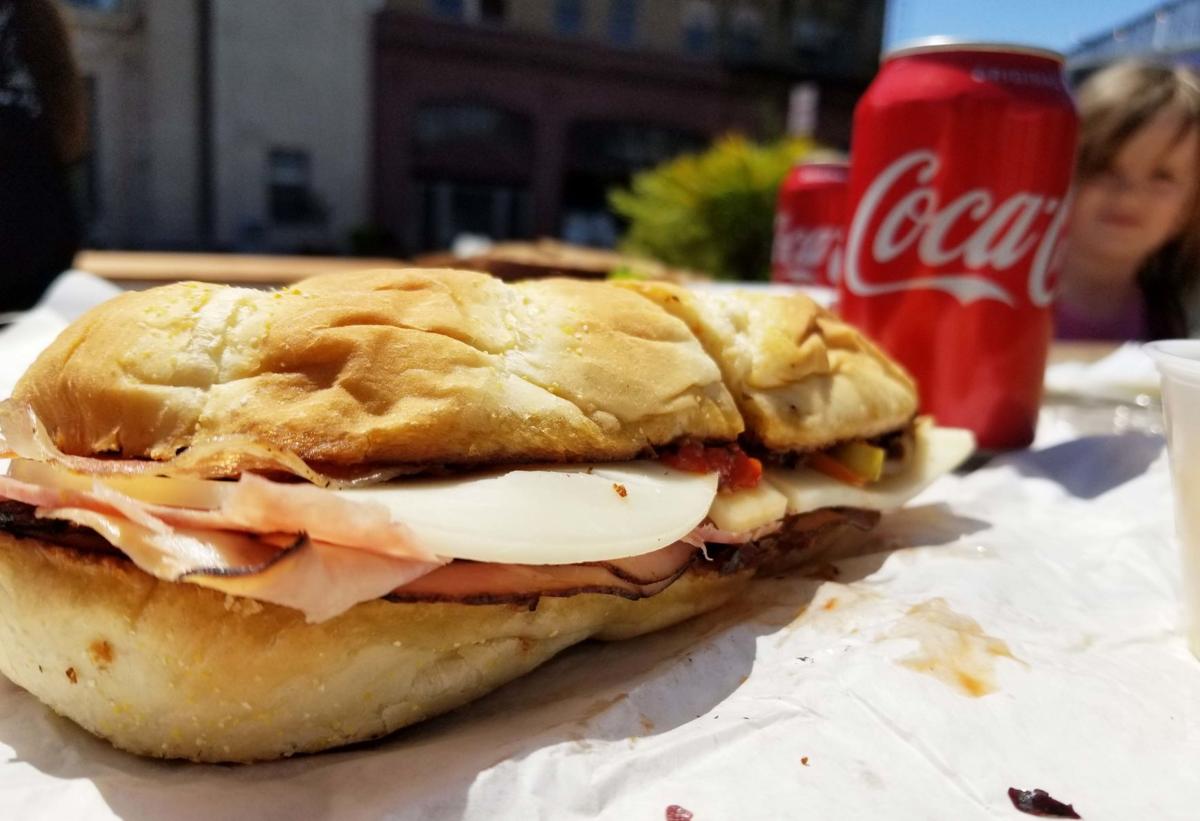 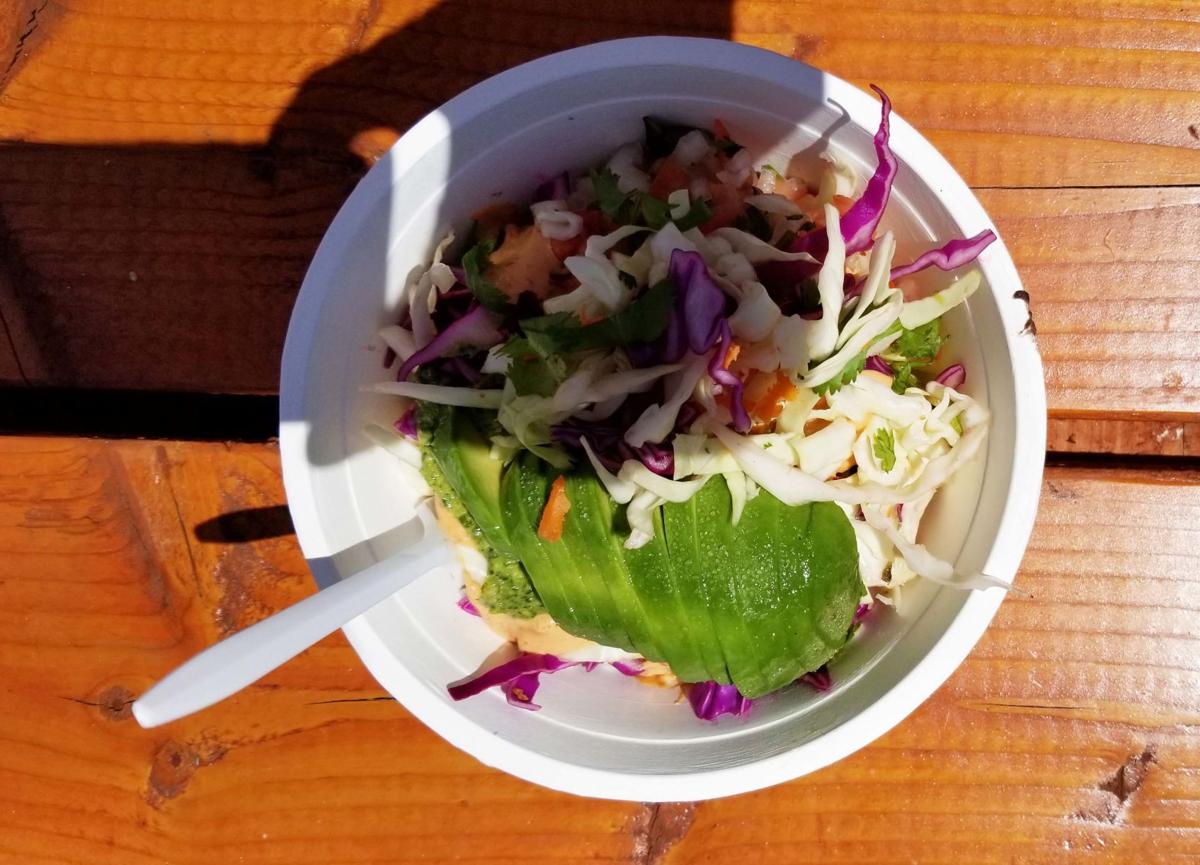 A Good Bowl with avocado. 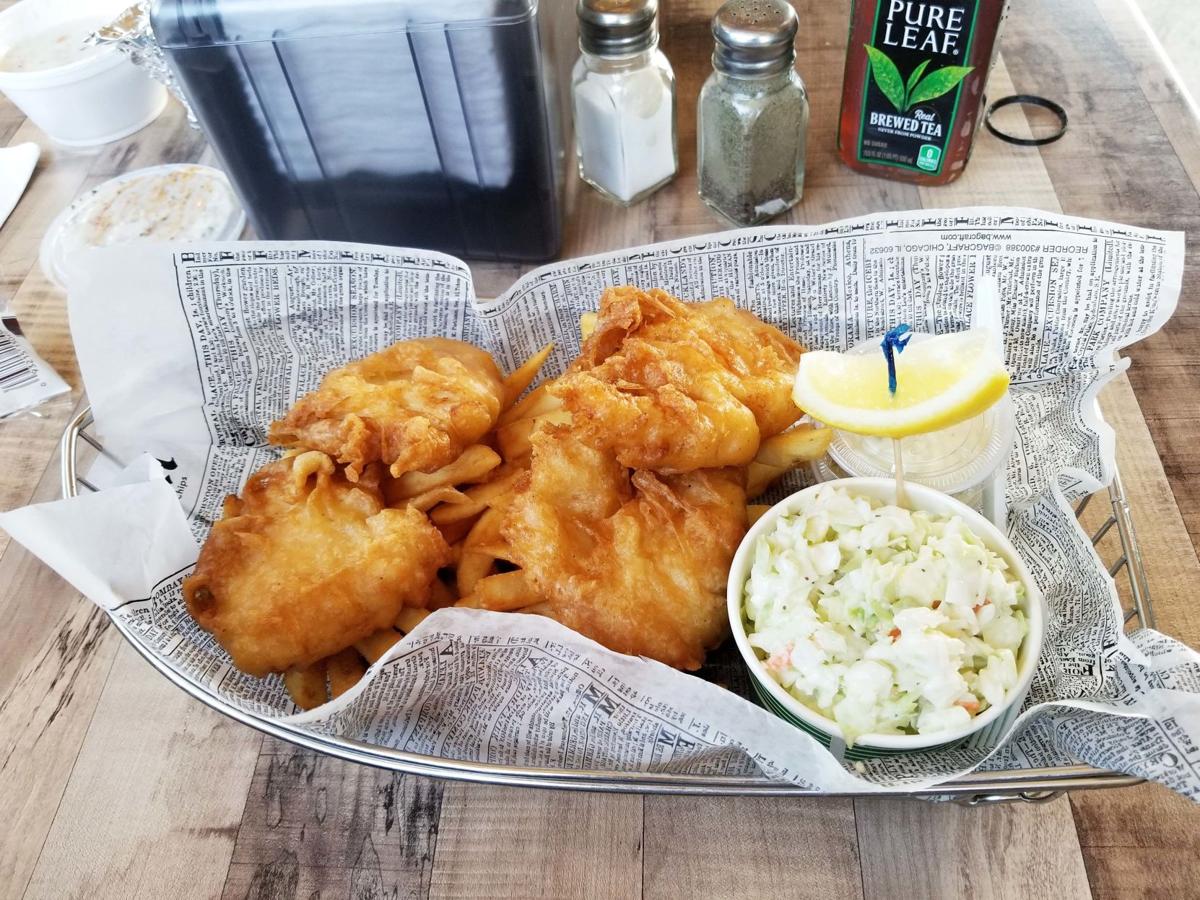 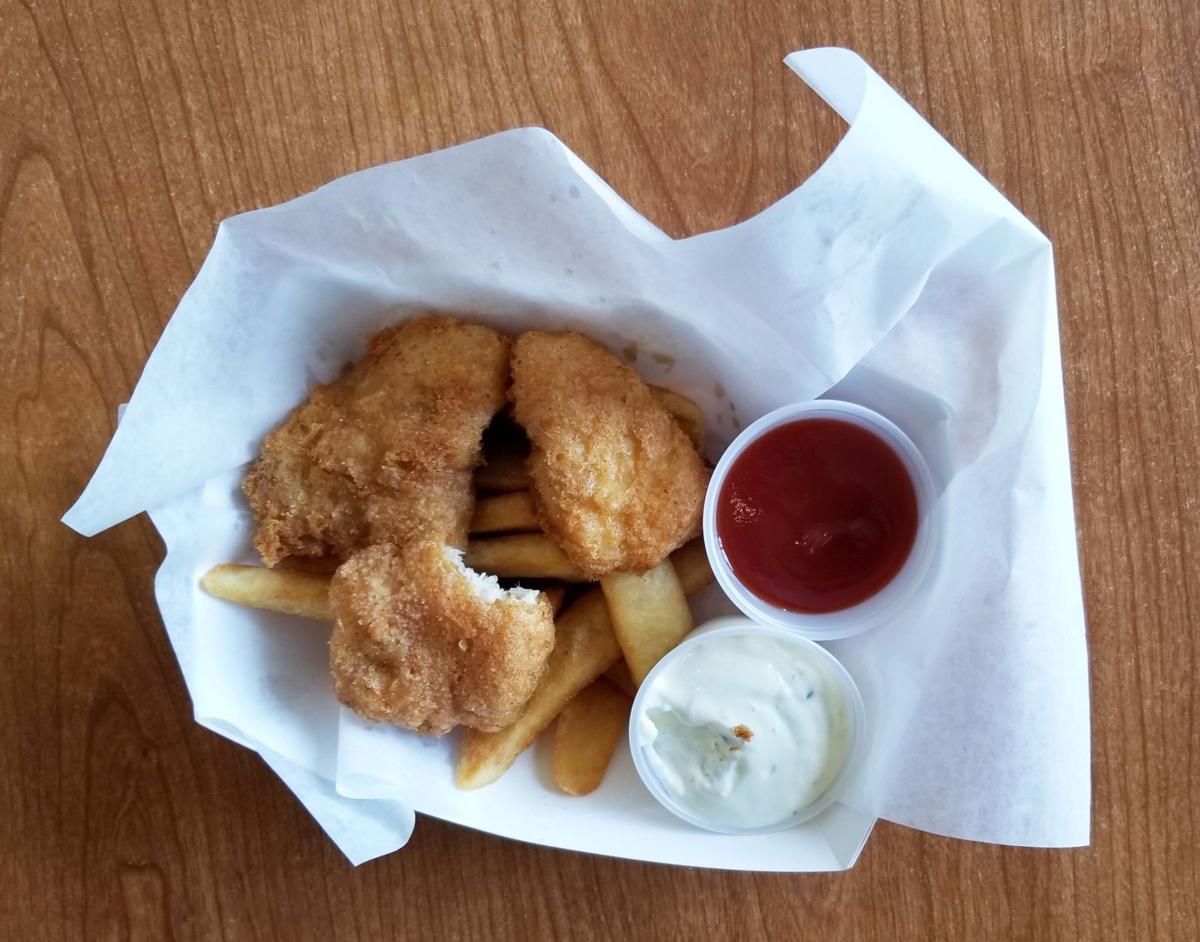 A half order of fish and chips from the Bowpicker. 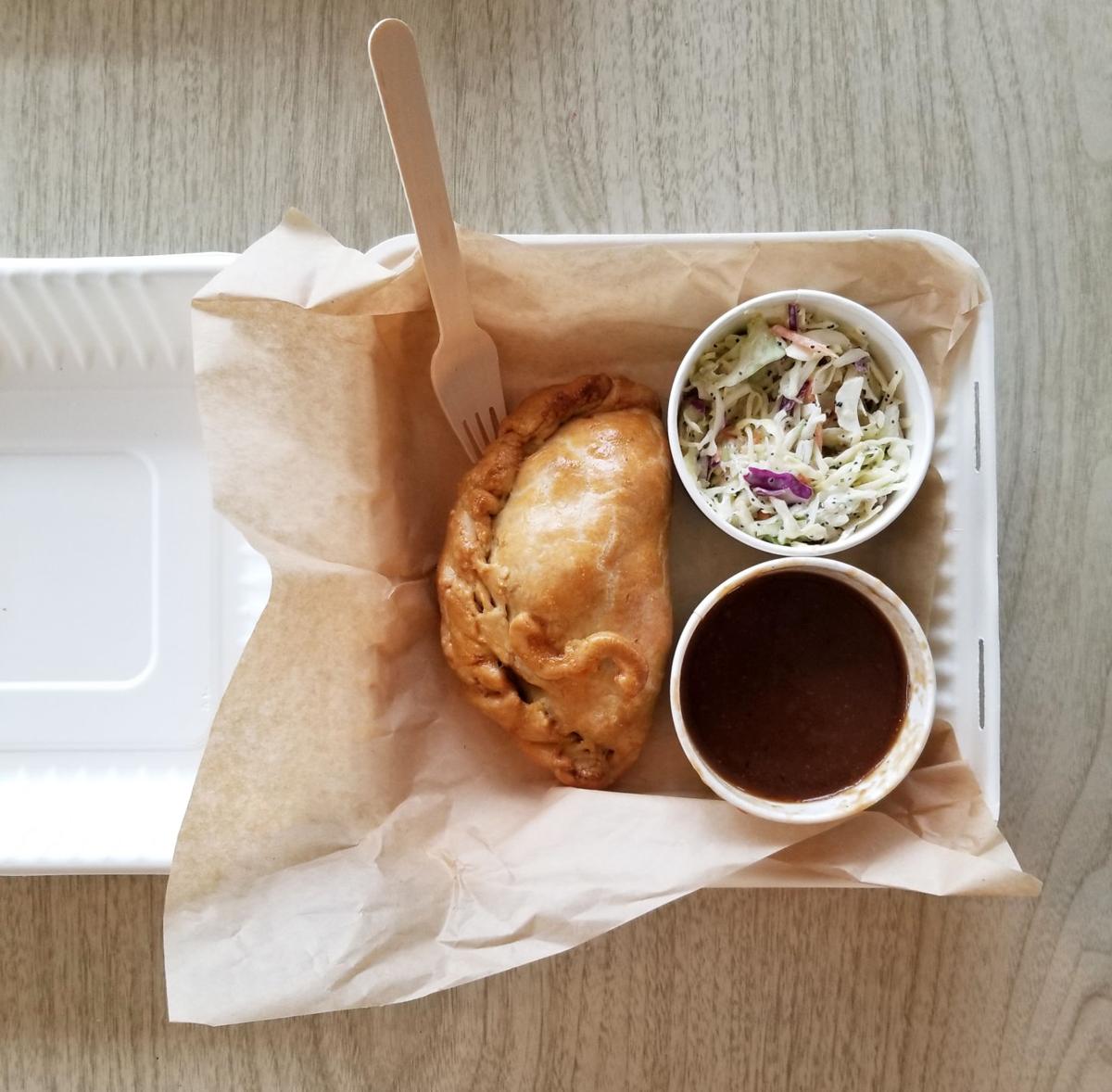 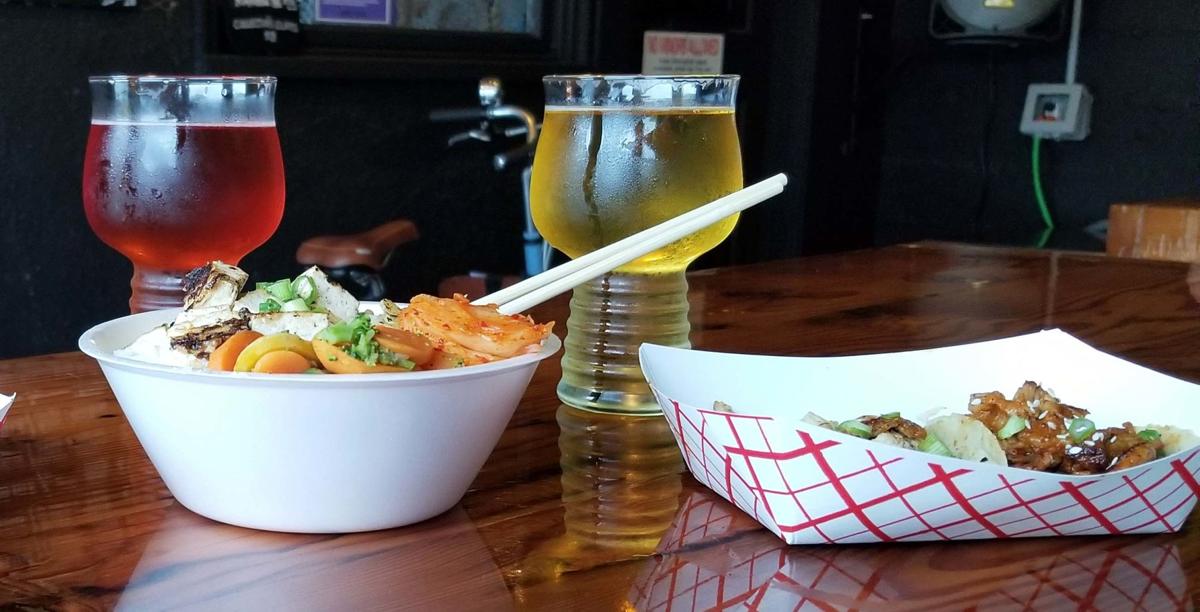 Now that summer has finally emerged on the North Coast, it’s time to start thinking about eating outside. What better place to begin than with the myriad of food carts and trucks that pepper the parking lots, patios and out-of-the-way spots around the greater metro area?

Coast Weekend has rounded up 13 mobile eateries in Astoria to try this summer near Astoria EcoWash, City Hall, in front of Reach Breaking Brewing and Reveille Ciderworks, the Armory and in Lewis and Clark. These are all-in year-rounders who brave the tap-tap-tap of the winter bopping on a metal roof as they shovel out plates and bowls, rain or shine.

We found chefs willing to take risks and plot their own paths. These are hard-working entrepreneurs who put passion and pride into their product, offer huge portions and can boast a heavy handful of regulars. Read our guide and decide where you can be a regular too.

El Asadero has outlived many of its neighboring carts by shelling out decent Mexican fare quickly and at an affordable price. All of their proteins — asada, pollo, carnitas and more — are spot on. You really just need to choose your desired delivery vehicle and accoutrements: taco ($1.75), burrito ($8), torta ($8). There’s plenty of pico to go around and some downright spicy onions pickled with habanero peppers, all served out of a Coleman cooler. If meat isn’t on the menu, a fat veggie burrito ($6) has plenty of rice, beans, cilantro and more to please the palette. Soft drinks imported and domestic are available.

This handsome cart has been slinging pasties, pies (and most recently) pasty bowls for the better part of the year. The pasties (a traditional British handheld, meat-and-vegetable pie by way of Pennsylvania) are undoubtedly tasty and really built for two unless you are incredibly famished. Regular menu stalwarts like the Uncle Oggy and the Slater (all pasties are $8) both please, while new filling combinations keep things interesting. There’s also always a vegetarian or vegan pie in the mix. Don’t forget the scratch-made gravies! But really, for my money, I would suggest the panko-breaded Squatch Eggs ($6) dunked in Bucket Sauce, a peach-and-jalapeño mustard blend that complements the sausage-coated egg.

The Good Bowl does exactly what it tells you it will do: provides a hefty, good bowl of food. In fact, even their tacos come in a bowl. This vegan-friendly cart takes humble staples like rice and beans and elevates them with seasonal local produce and house-made sauces like chipotle sour cream and cilantro ginger pesto. The menu does change with the seasons. Right now, bowls start at $8 with rice, beans, pepperjack, a fabulous cabbage slaw and the aforementioned sauces, plus pico. Add chicken for $3, avocado for $2 or a fried egg for $1, or go crazy and add it all. It’s your bowl after all!

Let’s all be thankful that owner Rich Pizzuti retired from construction and decided to get his hands dirty with dough instead of drywall. This recently transplanted cart from Forest Grove has been churning out quality pies with imported ingredients since mid-February. These Calabrese-style pies pack a bit more punch and spice into their tomato sauce, but still sit above a chewy, Napoli-style crust with plenty of air and char. Pizzuti slings more slices than whole pies, but will take call-in orders for pick-up. The three meat special ($28/$35) featuring prosciutto, hot copa ham, soppressata and portabellas as well as Pizzuti’s five cheese blend is a fan favorite. A recent slice topped with chunks of Portuguese linguica sausage was divine. Fresh handfuls of basil and arugula were spilled upon slices at no additional charge.

Roll & Bowl has been doling out thoughtful, steaming bowls of ramen and handmade sushi rolls from the corner of the City Hall pod for nearly a year now. Chef Bryan Tiller’s ramen is intense and deeply flavorful because there’s a lot of care and patience attuned to each ingredient before it’s slipped into a homemade broth. The Spicy Buddha ($14) starts with a rich, creamy, Tonkotsu, pork-based broth that is then enlivened by a roasted chile oil and powder. The addition of housemade kim chi adds a smack of tang. There’s some special alchemy that allows marinated, grilled pork belly to remain succulent and crispy on the exterior even as it sits atop hot soup. Fresh noodles, a soft boiled egg and a bouquet of local vegetables seal the deal. The same focus is visited upon the poke bowl ($11). Tiller, who trained in Hawaii, uses a heap of citrus-marinated albacore tuna as the base for the island’s answer to ceviche. The tender but firm fish, complimented by pickled ginger and cucumber, seaweed, kim chi, and fluorescent orange roe served on rice with onions and greens, makes for a bright and vibrant lunch. A side of house pickles ($4) really highlights the different flavors each vegetable — cucumber, mushrooms, kim chi, cauliflower and more — adds when these fermented delights end up in the other dishes. There’s a vegetarian miso ramen ($11) that can easily be veganfied with the omission of the egg and/or made spicy for an additional dollar. Conical sushi hand rolls ($6) and an assortment of grilled skewers on rice ($5) round out the menu. Once rolling through farmers’ markets on the North Coast, let’s be happy Roll & Bowl put down roots in Astoria.

This gourmet sandwich shop is actually not related to the late Sasquatch Sausage cart that was parked by the Reach Break Brewery for a number of years. Owner Jason Lancaster already had his brand idea solidified and decided to run with it anyway and is slapping together some great products. He said he moves more grilled Reubens and Korean Reubens than anything else (the kimchi for that one is made down the block by Roll & Bowl), but the whole menu is exceptional. A stacked muffaletta ($12), piled with Swiss, provolone, prosciutto, ham and soppressata was ethereal and transporting. The true test of this New Orleans classic is how the bread holds up against the briny olive tapenade over time and this one, on a grilled hoagie, definitely passed with flying, dark-red vinegary colors. It gets better with age. Don’t forgo the sides either. Great potato salad and a quick-brined cucumber salad.

Newcomer Surf 2 Soul is a welcome addition to Astoria’s food cart scene, offering fresh takes on Southern classics with local ingredients when no brick and mortar establishment is plating up anything close to these regional delicacies. Chef Jordan Wilson is launching more Shrimp Po’ Boys ($10) out onto 11th St. than anything else, but his signature sandwich, Which Came First? ($10/$12 with an egg), is an explosion. Tender fried chicken breast smothered in pimento cheese and squeezed between two bacon-and-chive waffle slices, served with a side of syrup, is a great, rich take on traditional chicken and waffles. Don’t underestimate the chef’s French-fry game either — these are some perfectly seasoned spuds. Sometimes the soul needs a little sin and Surf 2 Soul doesn’t disappoint.

This beguiling little cart, with a revamped menu, is the product of Dan and Abbie Rhoads’ fascination with the global melting pot of Hong Kong’s culinary scene. One way to think of it is that it is a little port in a port city celebrating a widely diverse international port. The East-to-West flavors have been pared down a bit. What’s left on the menu is mainly pan-Asian and served on thick, meaty, delicious tortillas ($3.50) unless you opt for the rice bowls ($9), which include kimchi. Korean bulgogi beef and spicy pork are favorites. A Japanese miso tofu is vegan friendly. I was most impressed with the simplicity and solid flavors of the Chinese ginger-garlic taco. The bubble waffles are also quite delicious if you are able to pry a child away from one of them.

Run by the same couple that owns Hong Kong Taco, The Hot Box BBQ is their original venture, brought north from Humboldt County, Calif., to make us smack our lips. What happens to pork, chicken and tofu when it hits sweet hickory and applewood smoke is a debate that both carnivores and vegetarians can get in on for once. The results from both sides should conclude tasty. Co-owner Dan Rhoads said they push more Classics ($9), but it’s the Volcano ($10), with its onion petals, Sriracha aioli and jalapeño jam that keeps them coming back for more. Do not miss the sides. The addition of tart Granny Smith apples to a potato salad ($4) is spot-on and the Cole Slaw ($4) isn’t half bad either.

There’s been an explosion of Thai food on the North Coast recently, but Mai Tong and Nisa’s were here before the rest. Mai Tong does an exceptional job at Thai street food and you even get to choose your spice level from 1 to 5 stars, and it matches. Recent samples of Pad Thai with tofu and Drunken Noodles with chicken both (both $8) exemplified the care put into this cuisine, with hand-pulled noodles, fresh veg and tangy sauces complimenting the proteins.

Let’s be honest: the Bowpicker is not in need of my personal endorsement. Or any other food critic’s for that matter. They have foot traffic reaching back to 16th St. on a cloudy day near 11 a.m. Sure, there’s a novelty at play here: fried fish and chips out of a 28-foot-long dry-docked gillnetter between the Columbia River Maritime Museum and the Clatsop County Historical Society Heritage Museum. They do one thing and people eat it up, literally. And, let’s give credit where it’s due; they do it well. I love tuna, but it’s a big fish with a lot to say, like salmon. It can stand up to a grill or oven without being mitigated by batter or breading, but the Bowpicker does slice their catch slender enough that it works ($13/$9). The steak-cut fries are on point and near pomme frite puffiness level.

While parked in the corner of a Mobil gas station with tables only adjacent to the bathrooms, Pelayo’s Taqueria doesn’t appear at first sight to be what it is, a real good taco truck. I swear by their Al Pastor tacos ($1.50) as the best spicy pork tacos I have ever eaten. Doused in green salsa, onions and cilantro, these little guys, tucked into two tortillas, have a voice of their own. Add in a gregarious salsa bar that can take you from fruity and mild to scorched depending on your color preference. Remember, red means red. Two dollar tamales were moist, but a little skimpy on filling. They also pack a veggie burrito to the gills.

This cute cart in Lewis and Clark is run by a former employee of the late Ship Inn. The menu has burgers and dogs, but really you’re here for the fried seafood. Halibut, oysters, prawns and more, Enola’s is one of the last fish and chips shops in town that is still frying up cod ($11). The batter is crisp, the fries are hot and the slaw is sweet and crisp. The chowder is also on point, filled with tender clams and rendered smoky with quite a bit of bacon. Indoor seating offers protection from any seasonal elements and is heated in the winter.