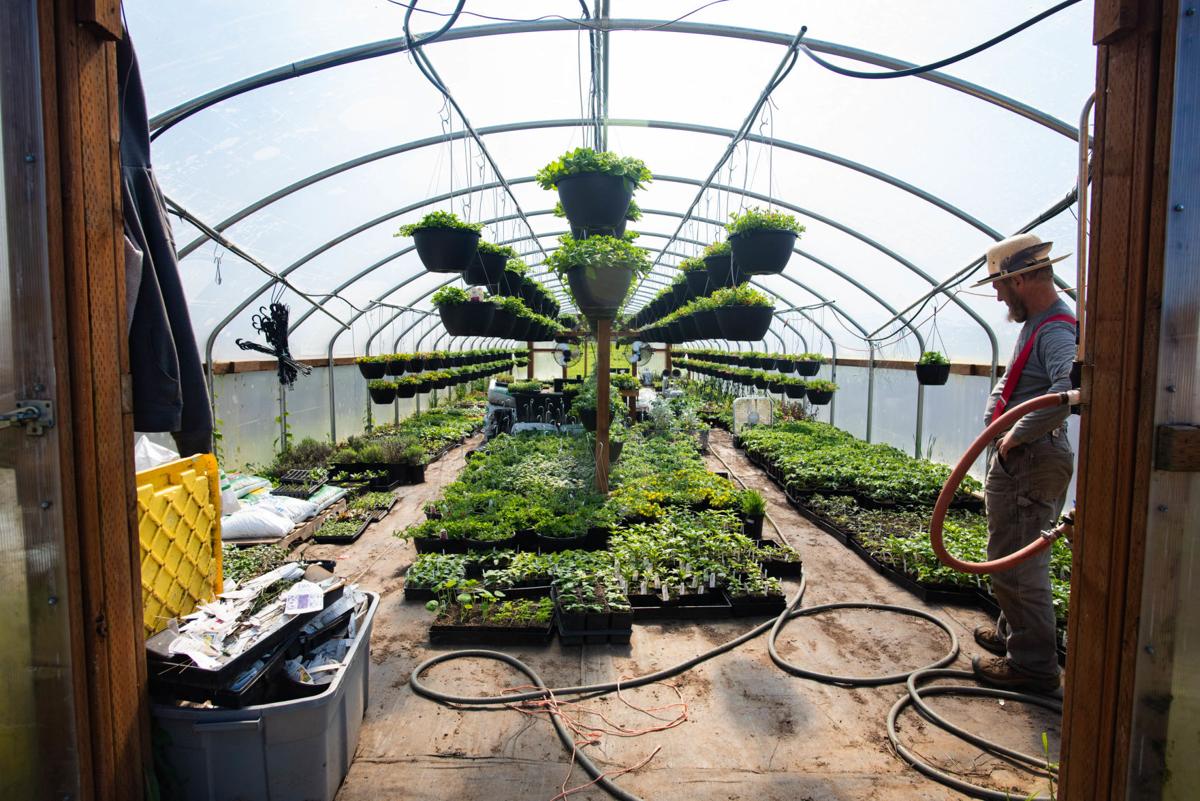 Scott Thompson stands in a greenhouse at Blackberry Bog Farm. 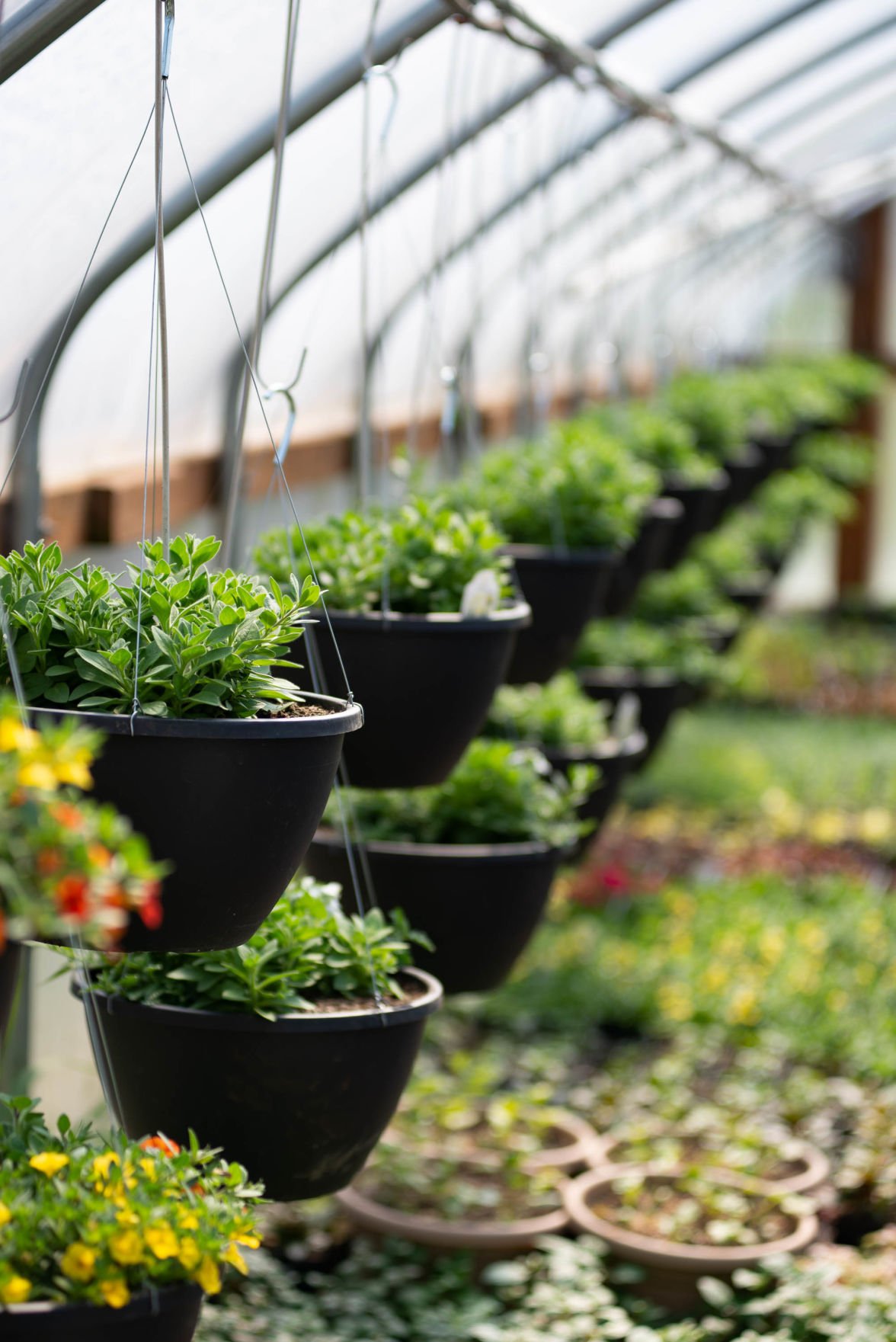 Dozens of baskets of plants hang in one of the many greenhouses at Blackberry Bog Farm. 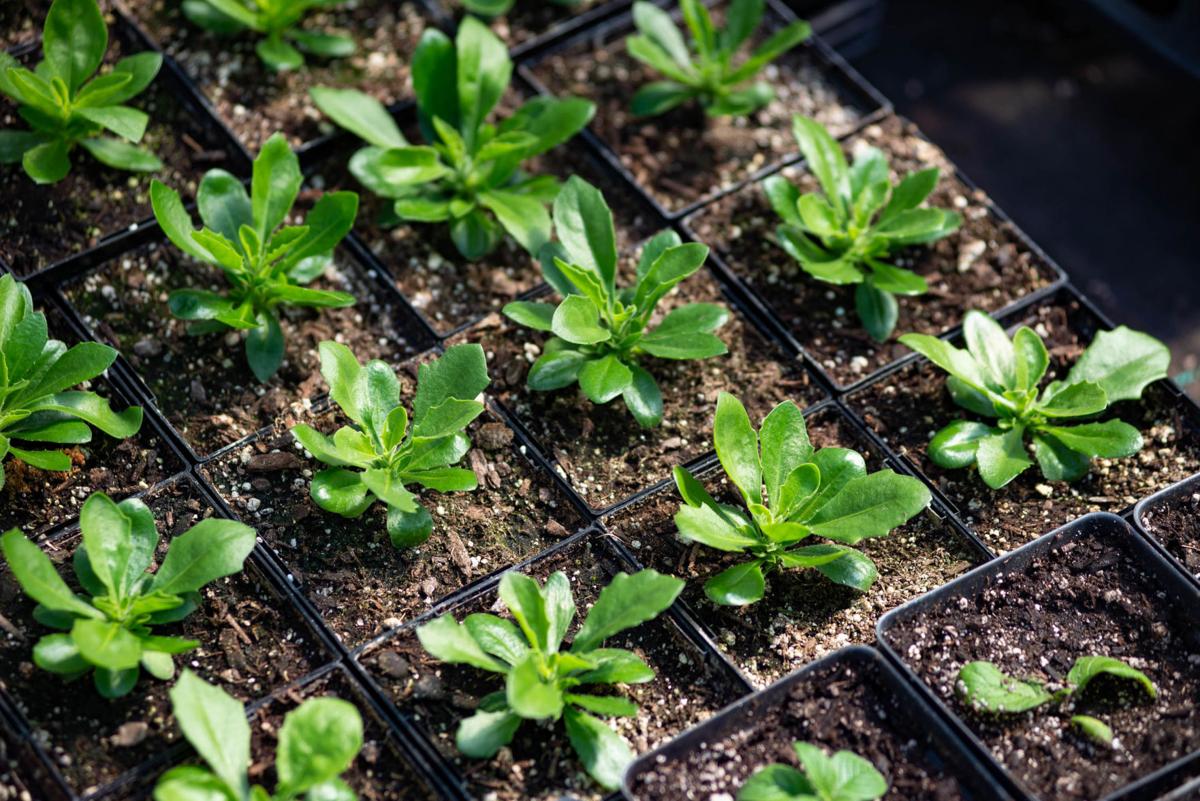 Seedlings sprout in a Blackberry Bog Farm greenhouse prior to being replanted. 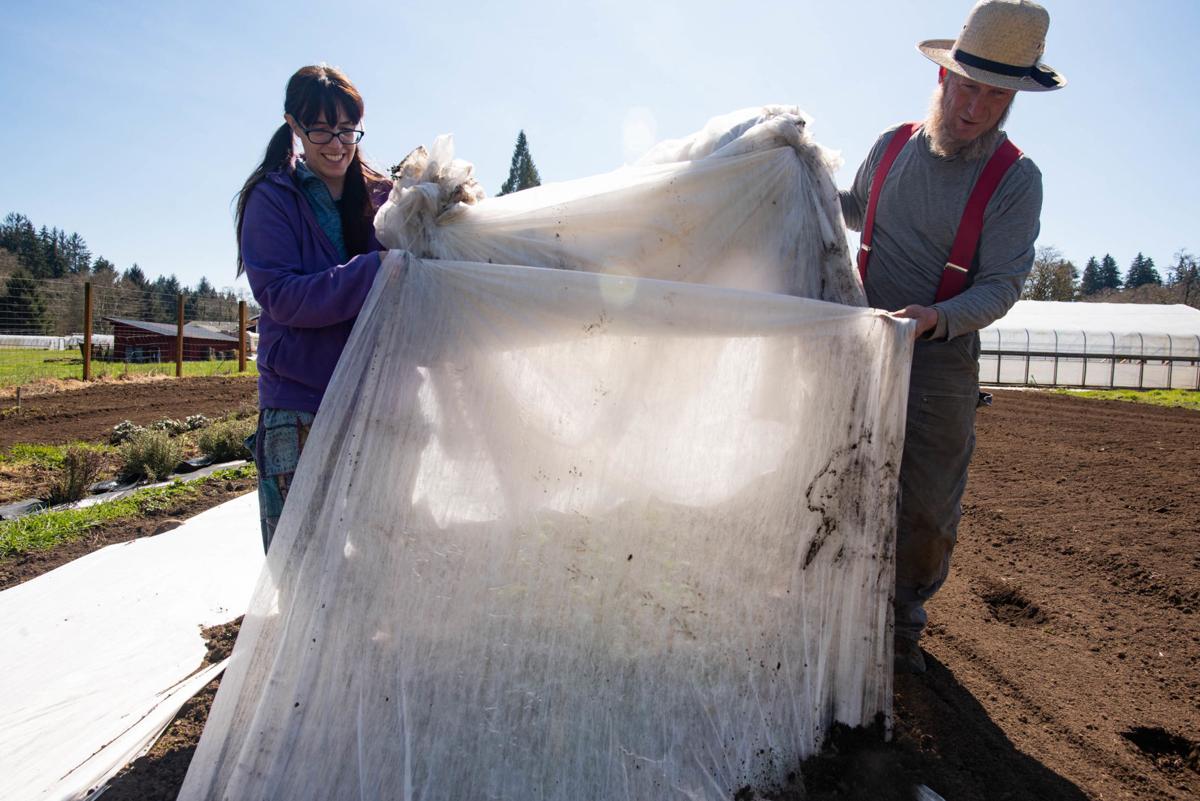 Scott and Bonnie Thompson pull a plastic sheet off a row of sprouting cauliflower at Blackberry Bog Farm. 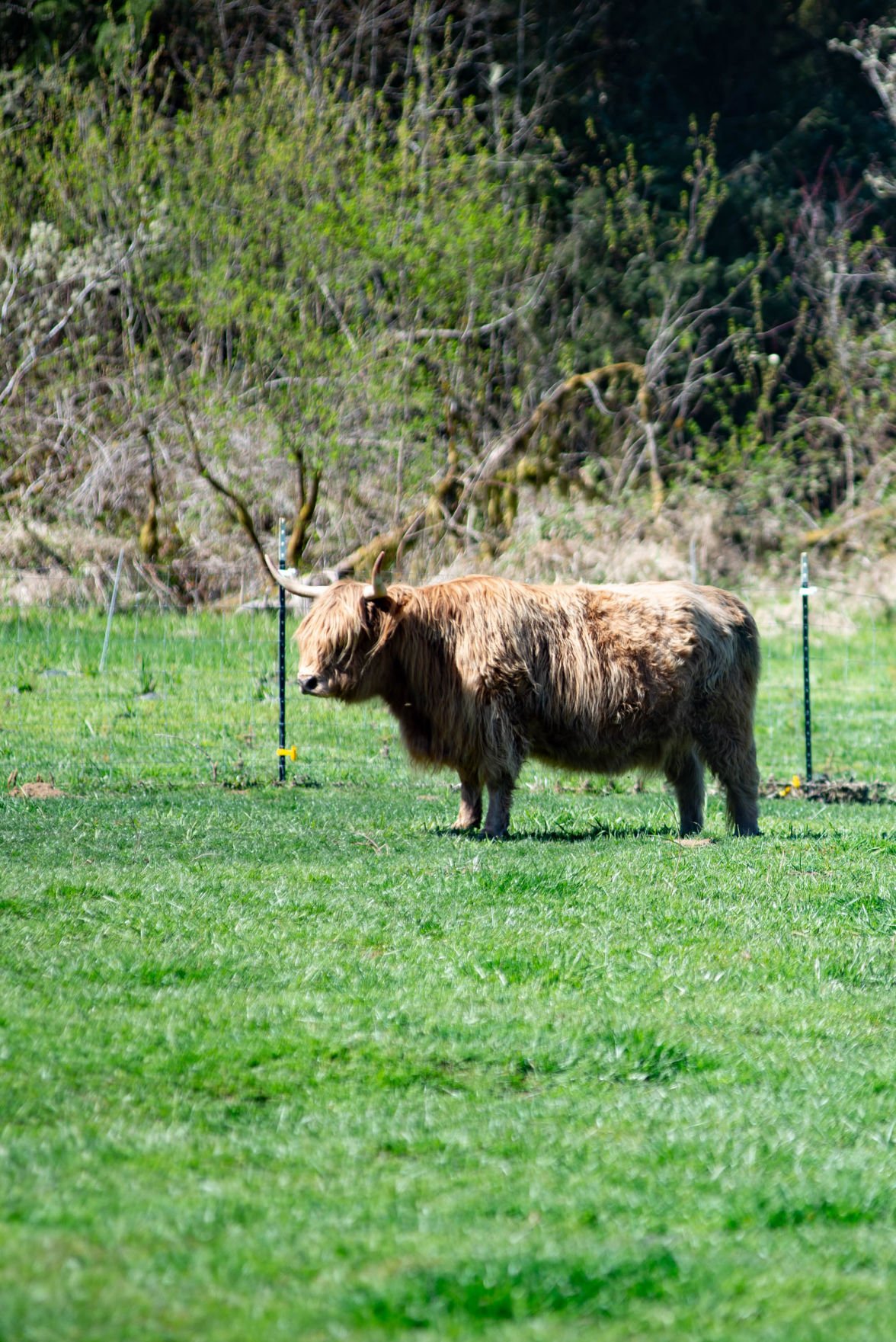 A Scottish Highland cow stands in the pasture at Blackberry Bog Farm.

Scott Thompson stands in a greenhouse at Blackberry Bog Farm.

Dozens of baskets of plants hang in one of the many greenhouses at Blackberry Bog Farm.

Seedlings sprout in a Blackberry Bog Farm greenhouse prior to being replanted.

Scott and Bonnie Thompson pull a plastic sheet off a row of sprouting cauliflower at Blackberry Bog Farm.

A Scottish Highland cow stands in the pasture at Blackberry Bog Farm.

Local farms have been faced with new challenges in recent weeks. As many of the coast’s restaurants have closed or faced reduced sales because of measures to prevent the spread of coronavirus, farms have lost some of their biggest and most consistent vendors.

Farmers have been left to adapt, as it’s unclear when restaurants will reopen, and whether farmers markets along the coast will open on time or at all this year.

Forage & Farm, a local food distributor, has seen a major loss in its restaurant clients.

Moon River Farm in Nehalem is another local producer that supplies local restaurants.

“About 30% of the farm’s total revenue comes from restaurants,” said co-owner Lily Strauss. “We’re anticipating decreased restaurant sales for the rest of the season.”

Also based in Nehalem is Nehalem River Ranch, which produces pasture-raised meat. During this time of year, about 90% of the ranch’s business comes from restaurants, said owner Jared Gardner. The ranch is now faced with the challenge of what to do with its stock.

“We’re all stocked up for about three to six months of restaurant business. Since they got shut down all of a sudden we’re unsure if we’ll get paid by them at all,” Gardner said. “For us, that’s what pays all of our bills so it’s scary.”

Restaurants typically want larger meat cuts than households. Gardner has been selling smaller-sized cuts at a discount but still has many of the larger cuts that had been prepared for restaurants.

“The business plan we set in motion for this year, we made three years ago. It’s really hard to change that now,” Gardner said. “The challenge is the size. Restaurants want primal cuts. Those are things most households can’t work with.”

One of the ranch’s biggest buyers was Fort George Brewery + Public House.

“Restaurants like Fort George were silently doing some of the most important work in our community, like emphasizing local vendors. That shift is significant,” Gardner said. “The food system takes everybody. It takes restaurants supporting local farms.”

“To lose that customer is significant,” said owner Scott Thompson. “We can and do sell chickens to the public and we’ve seen a great interest in that in the last few weeks.”

“Given that we do a lot of different things, poultry, produce and the nursery, that provides us with some resiliency with the farm,” Thompson said. “It can be a challenge sometimes to do so many things. But if something doesn’t go right, there are other things to focus on.”

Earlier this year, the farm put together about 400 hanging baskets, intending to sell them at plant shows. The shows have since been canceled, leaving the farm with the abundance of baskets.

“The shows are probably half of our nursery income,” Thompson said. “We’re now reducing our nursery and increasing our produce to be flexible and meet what we hope are the anticipated wants of customers. It’s a fickle thing.”

Another concern for the farm is whether local farmers markets will still happen this year.

“We have three acres of land where we grow food. We’ve traditionally sold it through markets,” Thompson said. “This year would be our sixth year at the Seaside Farmers Market but it’s in question if the market will happen.”

In response to the lost restaurant orders, many local farmers have switched their focus to increasing their community supported agriculture programs. Through the programs, individuals buy a share of a farm. Buyers then receive a weekly delivery of fresh produce, grown at the farm.

“We’ve seen an enormous increase in the interest of our CSA program,” Strauss said. “Last year, we did 45 shares. We planned on increasing to 60 this year but it filled up really quickly. We’ve rewrote our plan to accommodate 100 shares.”

Blackberry Bog Farm has also seen more interest in its program. The farm has increased its shares from 15 to 40.

“People want it and it’s a way that we can serve our customers,” Thompson said.

The farm has also received more orders for its vegetable starts.

“We didn’t anticipate that demand,” Thompson said. “We have lots more coming, especially for foods later in the season. We’re planting more, anticipating there will be more interest.”

Forage & Farm has received more interest in its community supported agriculture program as well but has struggled with the loss of its restaurant sales.

“We have run at a loss for the last few weeks in order to continue providing food to the families relying on our produce and also to keep our small staff paid,” Nevitt said. “We have had to completely change gears and focus on delivering our CSA boxes and produce to families and people sheltering at home.”

Within the last week and a half, Nevitt has started to see an increase in the business’ program.

“We are starting to do a little better than break even,” Nevitt said.

In Astoria, the North Coast Food Web has started an online marketplace for local farmers to sell their products. The organization is also raising funds for an emergency grant fund to help local farmers.

“We are aiming to raise at least $5,000 to be able to award five $1,000 mini-grants to local farmers or other small businesses that are heavily involved in the local food system,” said Jessika Tantisook, the food web’s executive director.

Many of the coast’s farms sell products on their websites.  Some of the farms, like Nehalem River Ranch, sell and deliver products from other local producers on the farm’s website.

“If we don’t build this food system together, if we act in competition, we all lose,” Gardner said. “Now is when we need to reflect on the food system and what we can do to make it resilient.”

Nehalem River Ranch, Moon River Farm and 46 North Farm are in the process of starting a local support group for farmers. The group, called the North Oregon Coast National Young Farmers Chapter, will provide free mentorship to farmers. Information about the program is available by emailing or.n.coast.young.farmers@gmail.com.

“Yes, this is a crisis now but this shows what’s going on in our food system in general,” Gardner said. “Too many of us have not been paying attention. If we use our dollars locally and support each other, that’s what’s going to help keep us afloat in the future. We’ll all be better off.”