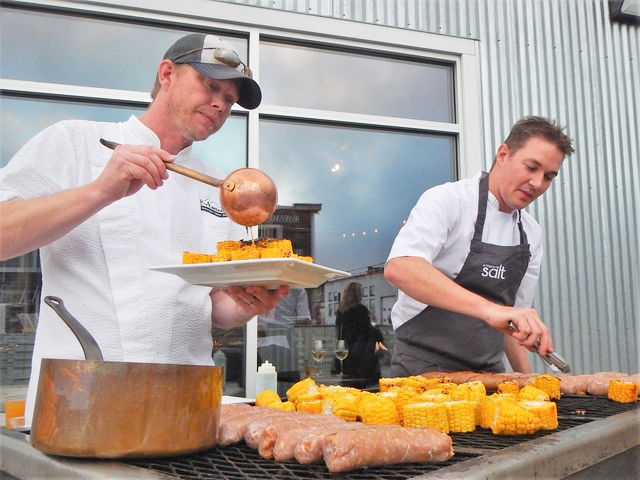 Chefs Chris Holen and Michael Brine at a collaboration BBQ in Astoria in 2016. 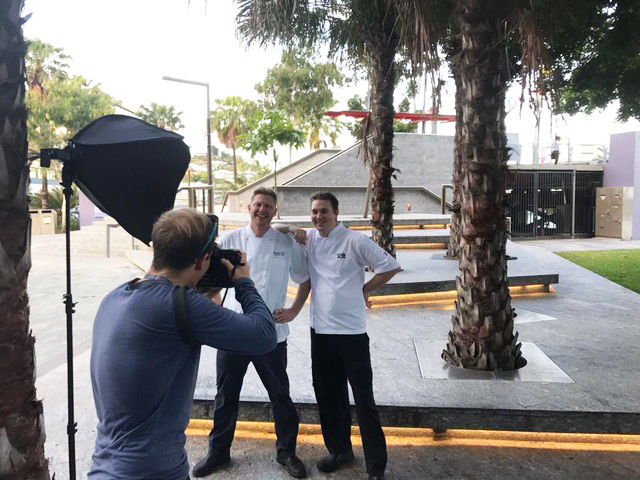 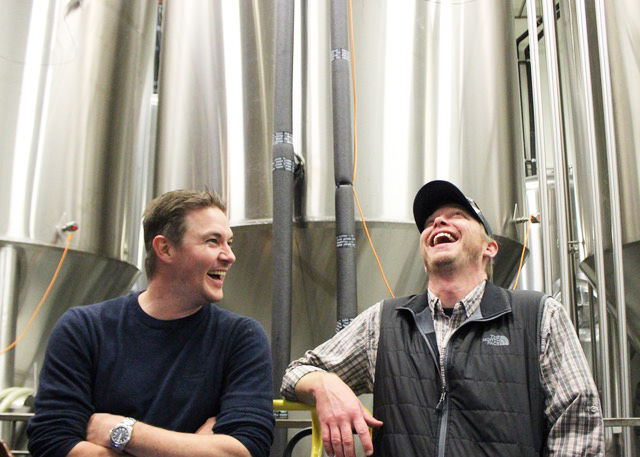 Chefs Michael Brine and Chris Holen share a laugh it at Pfriem Brewing in Hood River.

Chefs Chris Holen and Michael Brine at a collaboration BBQ in Astoria in 2016.

Chefs Michael Brine and Chris Holen share a laugh it at Pfriem Brewing in Hood River.

From foraging mushrooms in the Gifford Pinchot National Forest, to picking out a live snake in a food market in China, the pair have formed a culinary bond that spans the globe.

Food will be cooked in front of guests in an interactive long table family style setting. Advance reservations are required at bit.ly/2IAUUGG

There will also be a pay what you can Pop Up Lunch at 11 a.m. on Thursday, June 13, at Nekst Event. Job Corps student will collaborate with Brine and Holen at the event. Profits made will go to United Way of Clatsop County.

Holen met Brine in 2016 when he was invited to present at a culinary expo in Australia.

Brine cooked as a guest chef at Baked Alaska in 2017 and Holen in turn cooked at Brine’s restaurant.

Over the years, the two have noted almost eerie similarities: both chefs started their careers at the same age, their wives do bookkeeping for their respective family-run restaurants and both share similar, if not identical, philosophies on food.

“His background is very similar to mine,” Brine said. “In respect to Chris and what he’s achieved, it’s quite inspirational. He puts his heart into things and I’d like to think that I’m like that as well.”

Both chefs are very social, from interacting with their patrons to seeking out the freshest local ingredients in local markets in whatever part of the world they visit.

“It isn’t just down to putting good food on the table,” Brine said. “You get to meet a whole bunch of people when you collaborate and travel with. Chefs can get out of the kitchen and get out of their comfort zones.”

The chefs will only release small clues about their final menu for the Father’s Day event but insist it will be local, fresh and somewhat unscripted.

Brine is excited to visit Astoria once again and hopes to ride the Astoria Trolley.

“I love the challenge of things that could potentially go out of control. The ledge that people lean on and the off-the-cuff collaborations and that ability to maintain calmness under pressure and getting that food out in the timeframe,” Brine said. “You’re really on stage as a chef.”

An example of a Brine-Holen spontaneous creation is what they call their “mash-ups,” which are adventurous Queensland/Oregon fusions like Oregon fiddlehead ferns marinated in “bush-tucker” indigenous-aboriginal herbs and spices that can only be found in Australia.

“I’m confident enough in ourselves as chefs. We think, let’s support each other and see how it goes. It’s a proper collaboration,” Brine said.

Holen, who said that after 18 years in the restaurant business, each day can start to look too much like the day before, stressed the importance of continuing to explore. Brine shared this sentiment.

In 2016, Holen, along with his business partner, Simon Millcock, founded Chef Outta Water, which has facilitated global culinary exchanges in places like Iceland, China, Mexico and South Korea.

Since then, Brine has traveled from time to time with the program as a featured chef.

“From my perspective, it’s very beneficial as a chef to expand my horizons and press the restart button,” Brine said. “Travel gets you out of the kitchen. It reboots your confidence.”

What: Pay What You Can Pop-Up Lunch