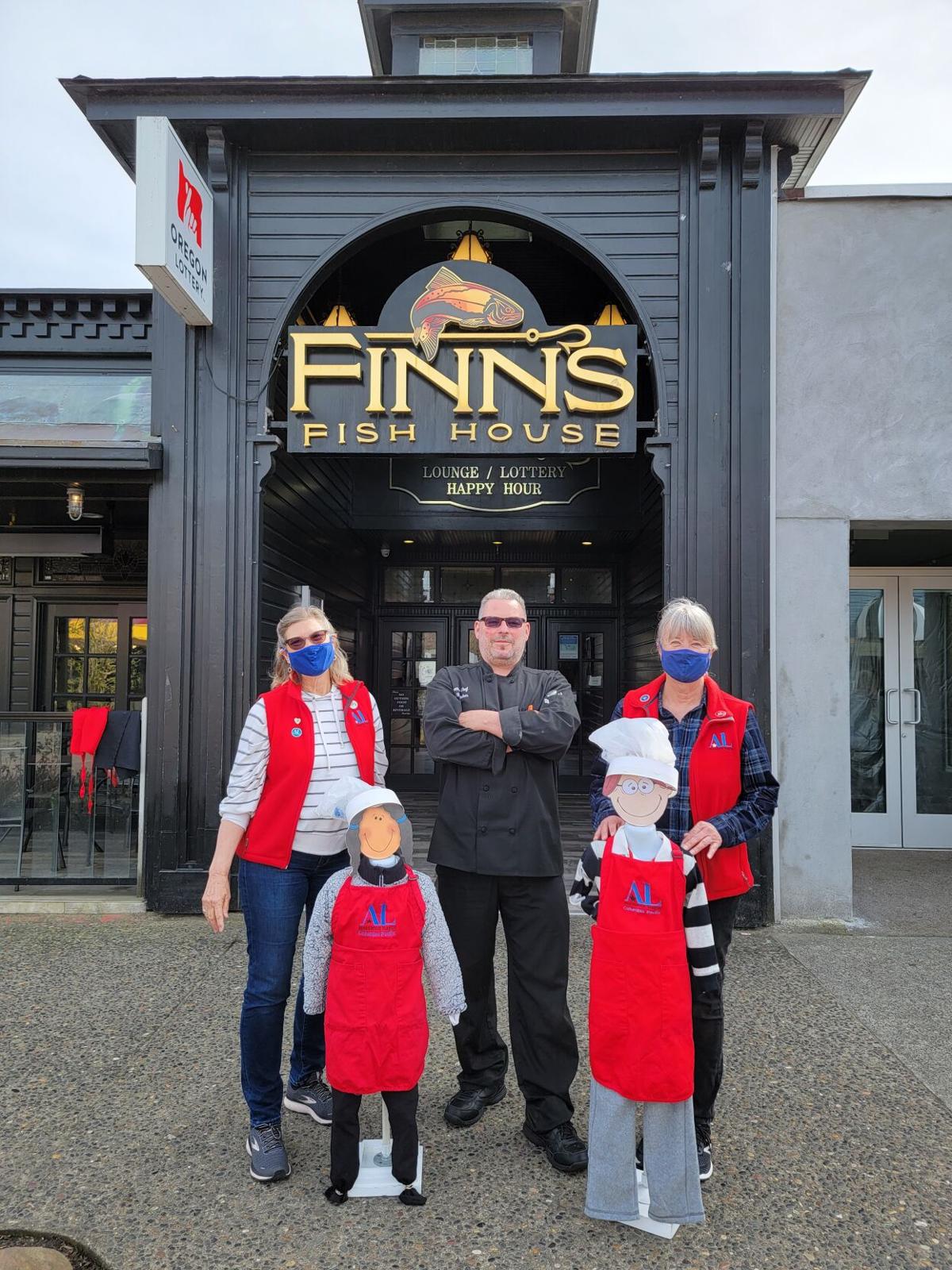 Chef Sean Whittaker is leading a virtual cooking event to benefit children via the Assistance League of the Columbia Pacific. Pictured with Whittaker are league board members Jane Cartwright, left, Shelby Mogenson and some stand-in young beneficiaries. 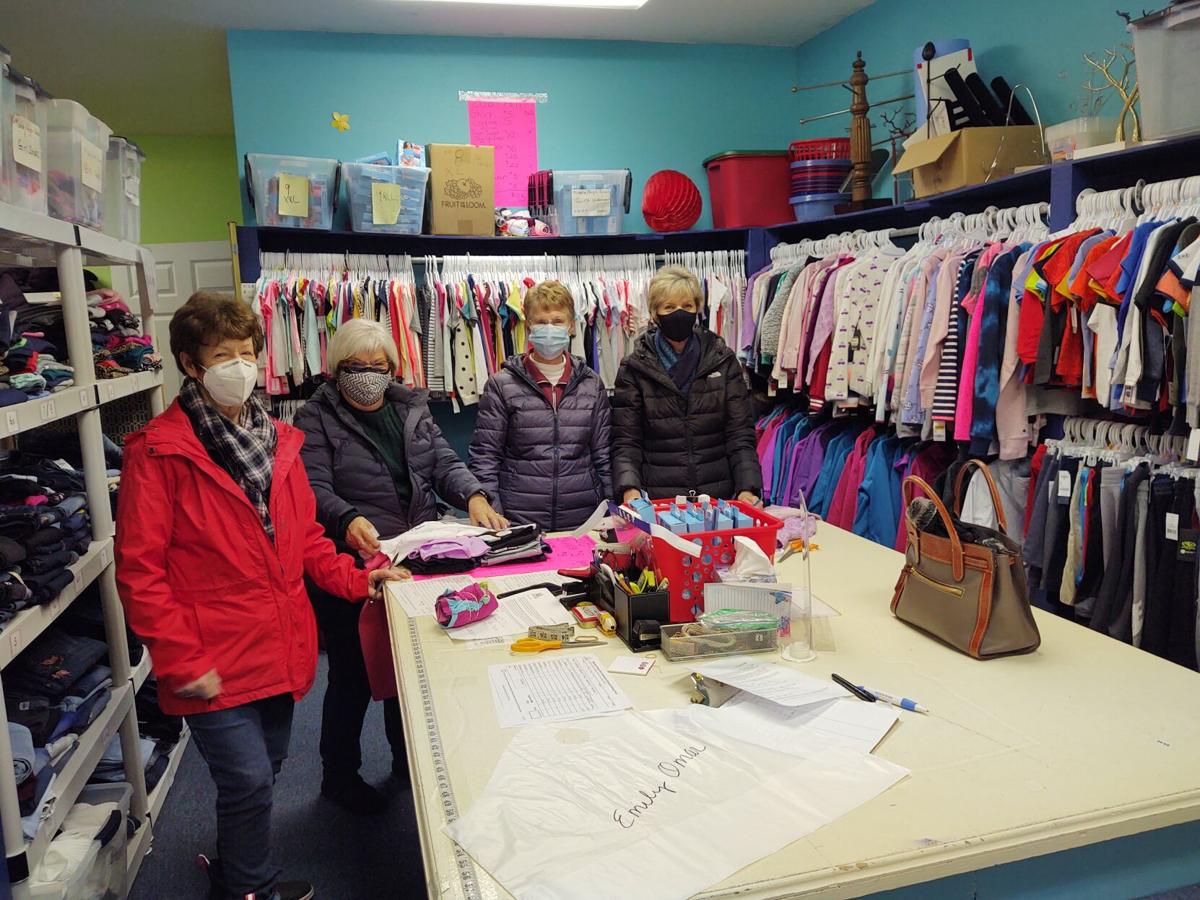 A group of volunteers sort clothing items in the Assistance League of the Columbia Pacific warehouse space. The clothing will go to help young people who are need of extra help.

Tickets are available at bit.ly/3t1r6co

This month, a night full of cooking lessons from a local chef will mean helping clothe and provide services for local children.

The Assistance League of the Columbia Pacific is hosting “Globe Trotting with Chef Sean” on Sunday. The event, which will take place online, offers participants the chance join a Zoom cooking class where they will learn how to make multiple dishes from around the world.

Chef Sean Whittaker, chef at Finn’s Fish House and a former Iron Chef Goes Coastal winner, will lead the classes. All proceeds for the event will go toward programs directly benefiting children of Clatsop County.

Chinese dumplings and coastal ceviche are two recipes that will be included, said Jane Cartwright, the league’s vice president of resource development.

The event will also include drawings for gift certificates to Finn’s Fish House, Twisted Fish Steakhouse and the Times Theatre, as well as other prizes, said Shelby Mogenson, league president.

“We are really excited,” she said. “This is a really fun chef.”

The league has been a chapter of the national organization since 2011. Its main focus is helping local children.

A huge project for the league is Operation School Bell, which provides clothes to children who need them for school. In a normal year, that includes going to schools, getting measurements and information on preferences, then bringing clothes back.

There is nothing quite like watching a kid who has never had new clothes getting dressed up and being so proud to cut the tags off the new items, Mogenson said.

This year, instead of visiting the schools, league members have had to just drop off bags of clothing or vouchers to buy new clothes instead.

“We are really missing that contact with the kids we serve,” Mogenson said. “We were able to change the programs a little bit, though, and are still able to help out kids without seeing them.”

This year, the league is on track to help more than 700 school kids get new clothes.

Another league program is the Duffel Bag Program, which provides a duffel bag full of clothing, a blanket, a book, a stuffed animal and other items to children who are placed in foster care.

That program expanded this year through a partnership with the Clatsop County Juvenile Department to provide duffel bags full of items to youth in trouble who may otherwise fall through the cracks, Mogenson said.

Cinderella’s Closet, another program helps provide prom dresses to those who need them, and a new program called Outreach goes to help area children with anything else they may need.

This year has been difficult in a lot of ways but it has also led to some of the strongest community support efforts the organization has ever seen, Cartwright said.

The league had to cancel its two main fundraisers due to the coronavirus pandemic. So instead, it reached out to people and asked for donations.

They answered tremendously, Cartwright said. The direct mail campaign brought in more than it normally brings in and businesses stepped up to donate, too.

“Both businesses and the people in our community have really helped us this year,” Cartwright said. “We just want to say how grateful we are.”

The league has a reserve fund, just in case of catastrophe, but the community has donated so much that it hasn’t had to touch that money, Mogenson said. Part of that has to do with a recent estate donation from a longtime friend who passed away, she said.

It’s even been able to start some new programs and a scholarship, though fundraisers like the chef night are still key to making things continue.