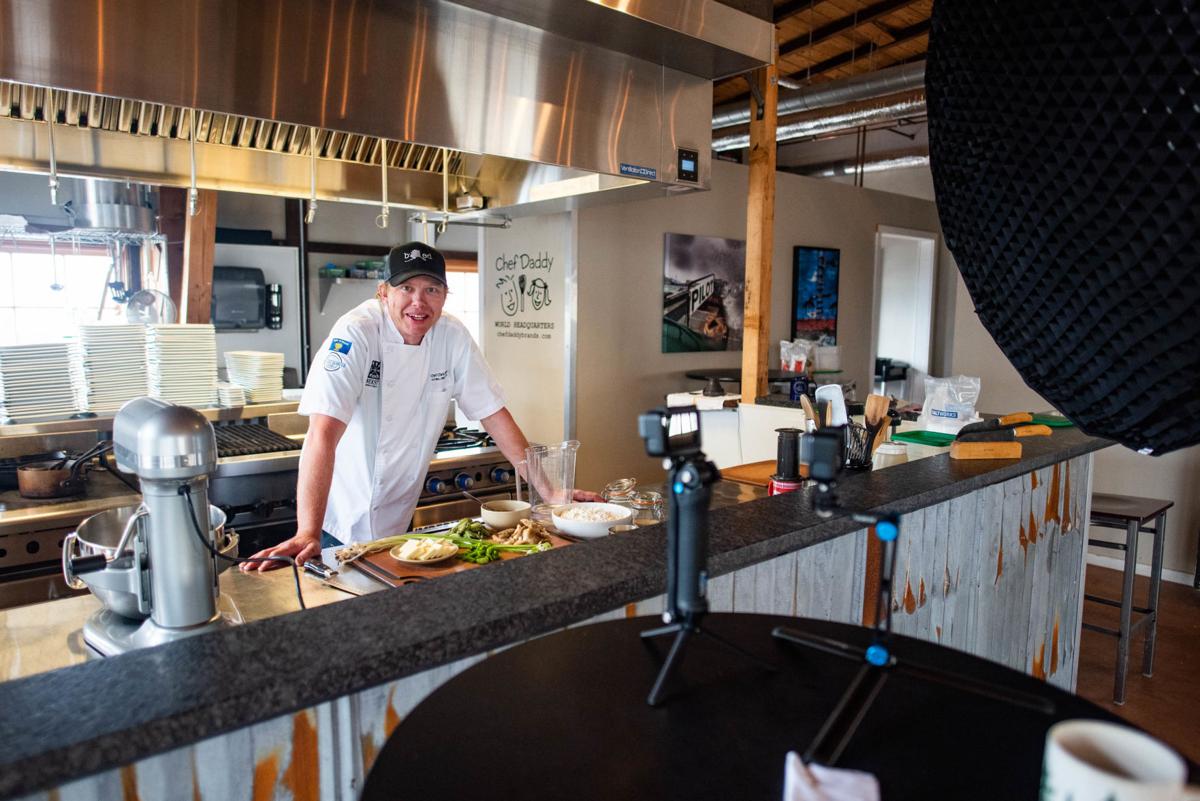 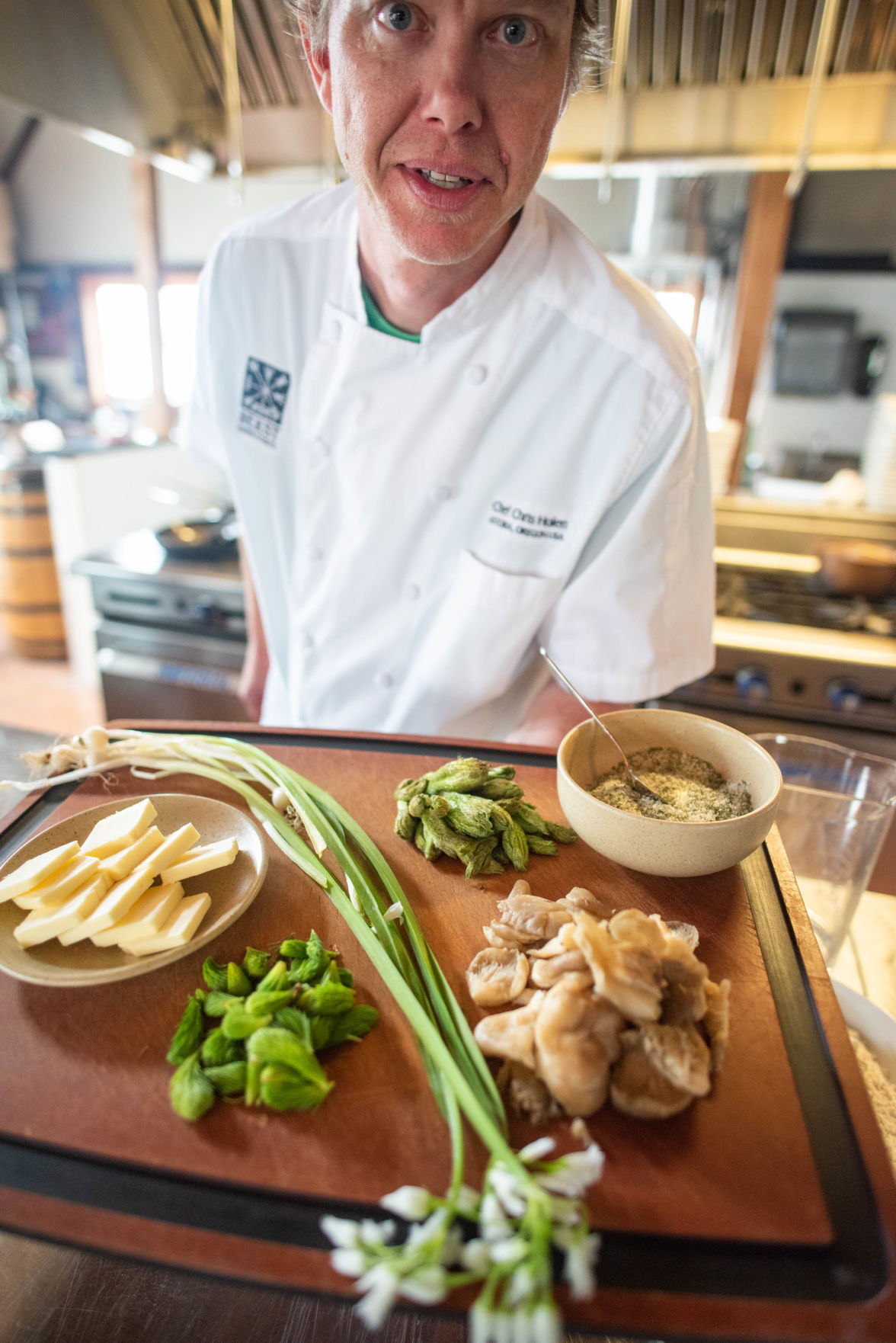 Chris Holen prepares to make a meal in his kitchen. 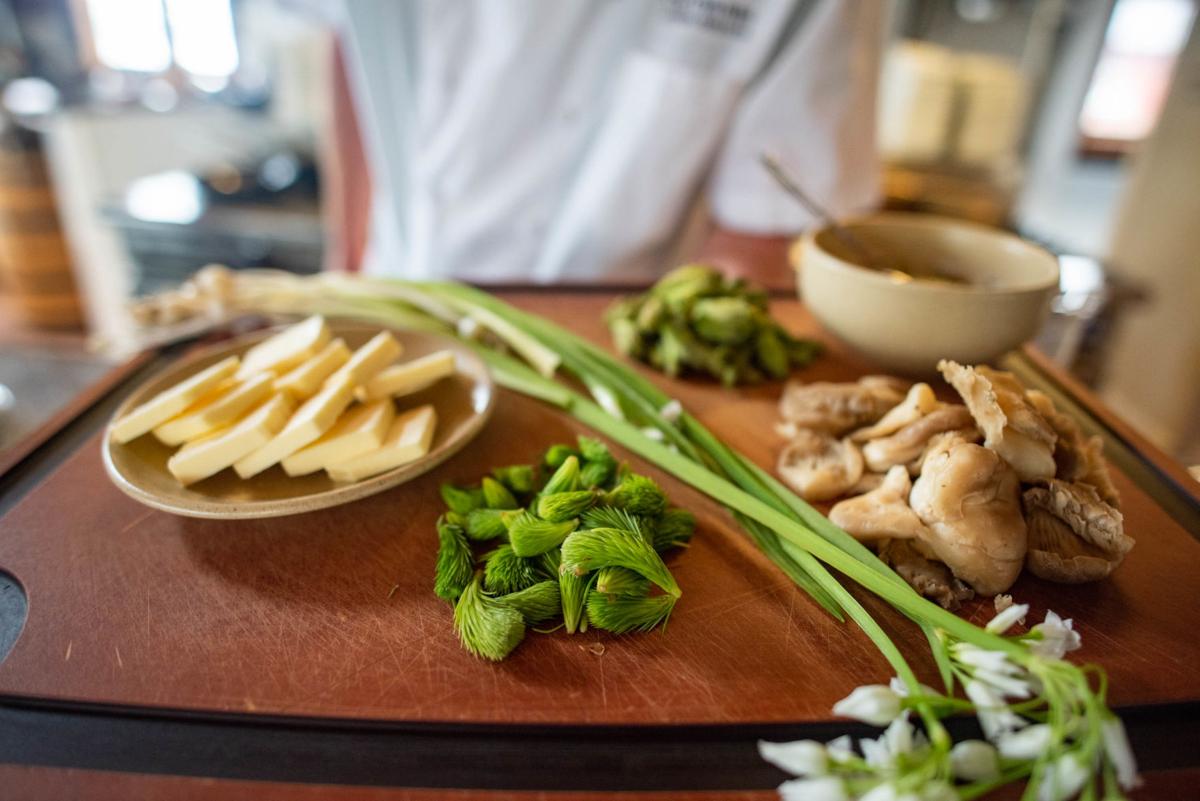 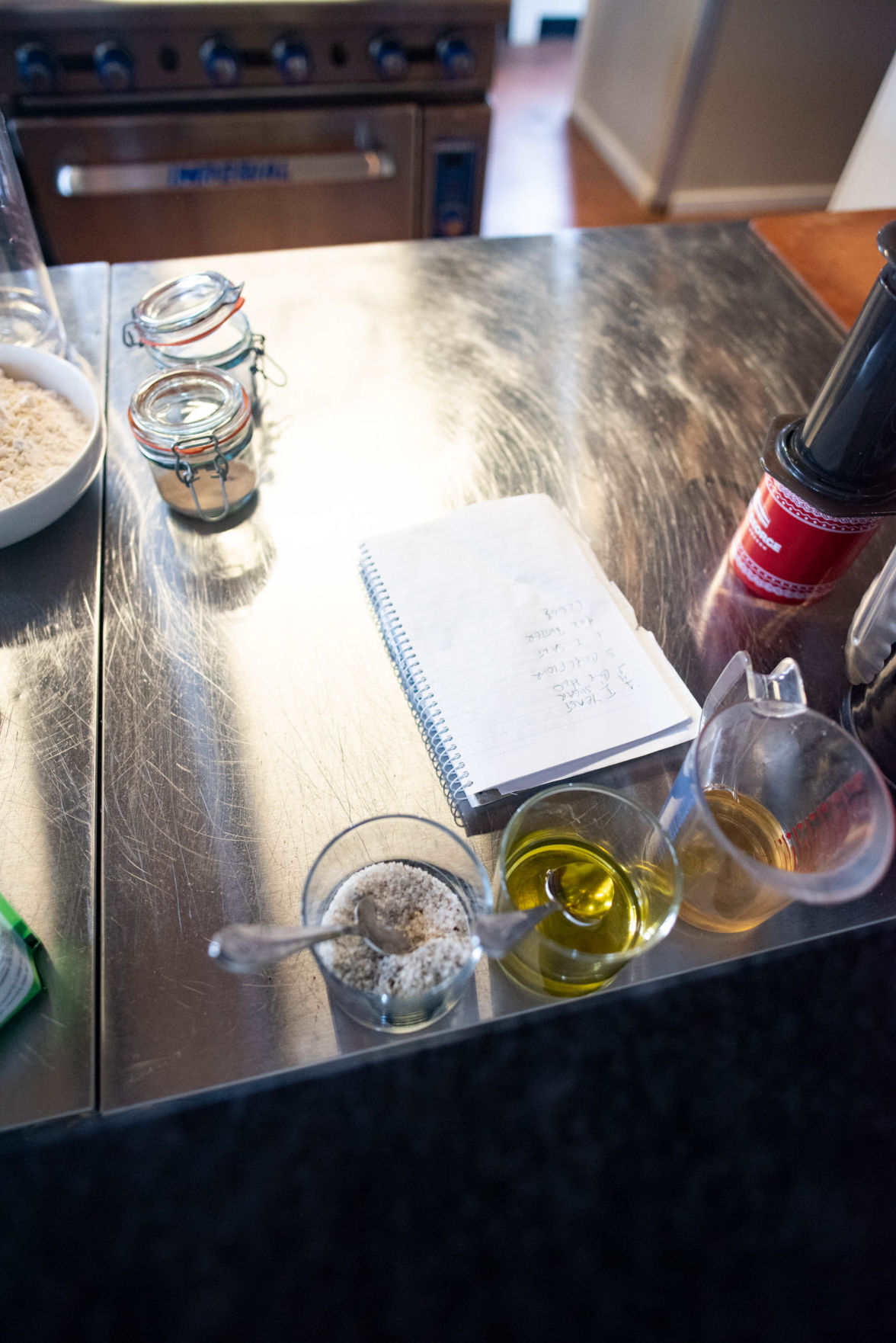 Within 24 hours of closing his restaurant’s doors in March, chef Chris Holen had a cooking video online.

In the two months since, Holen has filmed and uploaded about 25 videos. In each video, Holen talks about the history behind a food or dish, and a way to cook it. Topics range from making homemade sauce, to using foraged goods to cooking fish.

“We’re all so busy with things normally in our life,” Holen said. “Now we don’t even know what day it is. But what we do have is time with our families to make things like risotto.”

“I went, ‘What can we do?’ We can’t do takeout, our food is not conducive to that,” Holen said. “(The videos) are a way to maintain our relationship with customers during this time. It’s a comforting way to come into people’s homes and still connect with diners.”

Creating cooking videos is something Holen has always wanted to try. His experience with them primarily has come from his company Chef Outta Water, where he partners with chefs around the world to learn about their cultures and share his own.

“Not having the restaurant to go to every day gives me that time to do something I’ve wanted to do a long time,” Holen said. “Seeing people’s reactions and engagement has kept me going the whole time. We’ve set it up so people can learn what they want.”

The videos are posted on Facebook, Instagram and YouTube. On each platform, Holen asks viewers what they want to see in the next video and answers any questions he gets.

“It’s kept me creative,” Holen said. “For the first week or two I had lots of things to work with as I was winding down the restaurant’s inventory. As time has gone on, I’ve had less and less to work on. As a chef and a person, I’ve taught myself new things.”

Learning along the way

In making the videos, Holen first decides what dish he wants to feature. The dish is often suggested by a viewer or local food producer.

“It helps me be inspired for the next video if I know what people are looking for. Even when someone asks me to make something obscure, I’ll do what I can,” he said.

Then he researches the dish.

“I make a cup of coffee and find out what I’m going to have to work with to go from there. I divide what I learn into history, nutritional value and something interesting about the dish,” Holen said.

The day before filming the video, Holen makes the dish in a trial run to make sure everything tastes right. Then he fact-checks his information again. Finally, he gets to filming. After filming, he edits the video, which takes between eight and 10 hours on average, he said.

“The value in this is being able to learn more about an ingredient but also being able to share this with people. It might inspire them to cook different foods, to get out of their house, to create their own video, to do something,” Holen said.

Aside from having a videographer the first couple videos, and a couple guest appearances, Holen has filmed, directed and edited the videos on his own.

Cooking during a pandemic

“At the end of the day I’m putting myself out there and it keeps things a bit normal. It’s my current normal,” Holen said. “The silver lining is we’ve made tons of food at home, we’ve cooked together as a family and this has helped us decide what to grow in our garden this year.”

On the flipside, the videos have kept Holen busy while he’s been in limbo waiting to reopen his restaurant. Since closing the restaurant, Holen hasn’t received any revenue, he said.

“I’m in essence unemployed,” Holen said. “I’m trying to keep it simple by not buying anything. I think I’ve spent $80 total. When I say, ‘This video is brought to you by,’ they didn’t pay for it. This is about how I can help other people … I don’t expect anything in return.”

Creating the videos has given Holen a chance to consider other ways he can stay connected to cooking, like teaching classes, creating videos or writing books.

“We’re in the least sustainable business there is right now. We’ll be OK for a few months but I have no idea what’s going to happen,” Holen said. “Opposed to getting worked up about it, it’s an opportunity to think outside the box and recognize that things will likely never be as they were and what does that look like.”

Interested in learning how to cook? Holen suggests starting with his videos on making sourdough bread and mother sauce.

“Once you understand the classics, you can do anything you want,” Holen said.