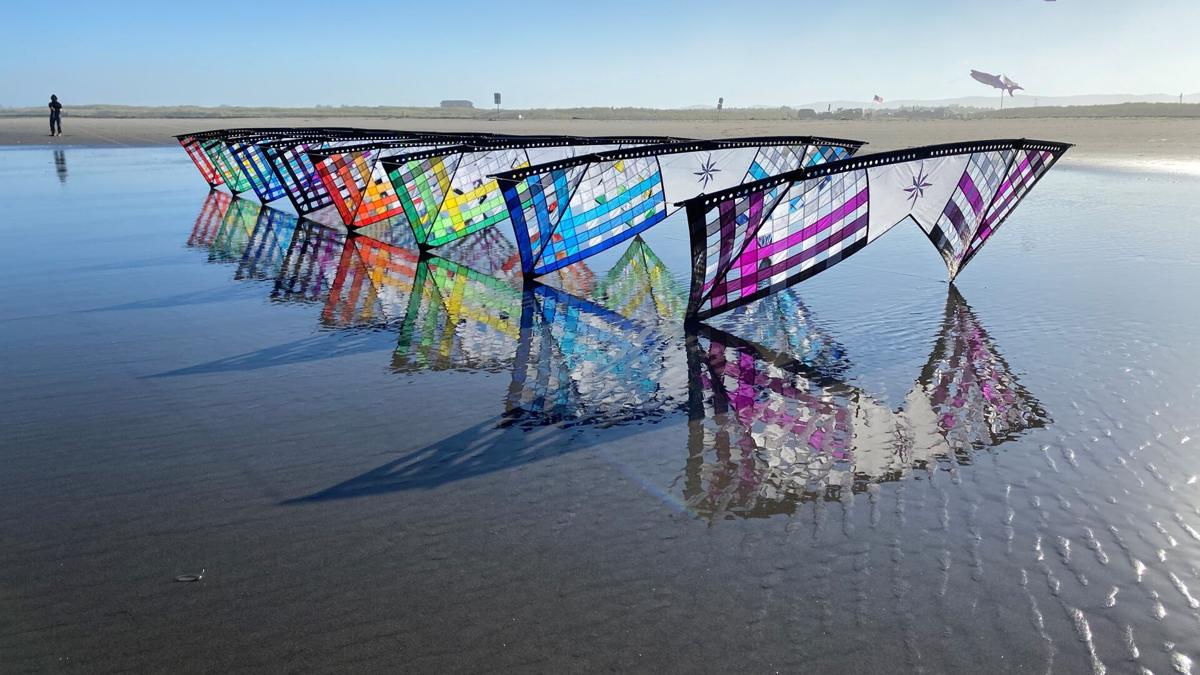 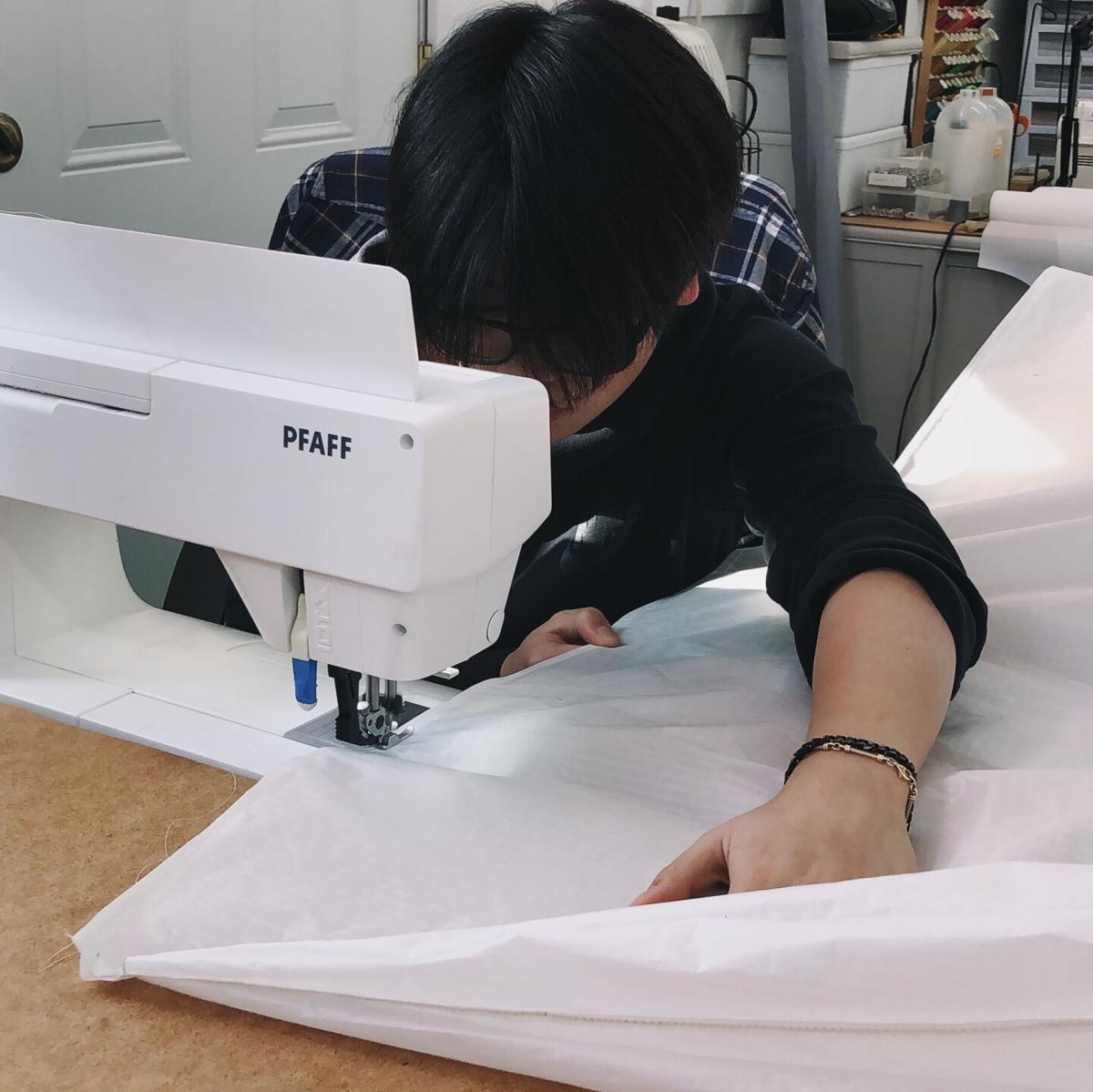 Nguyen uses the experience he gained sewing masks for health workers to make his own kites. 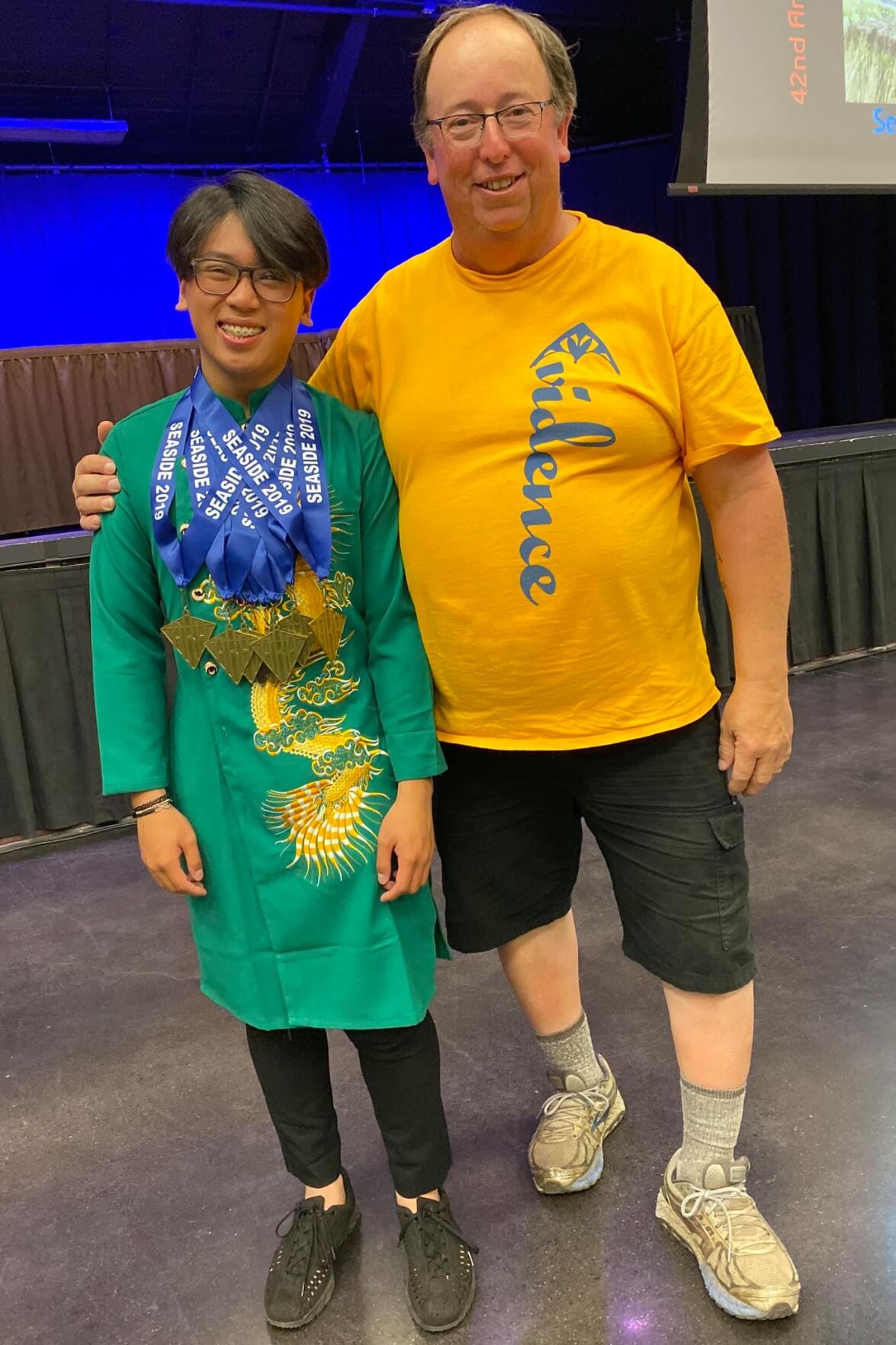 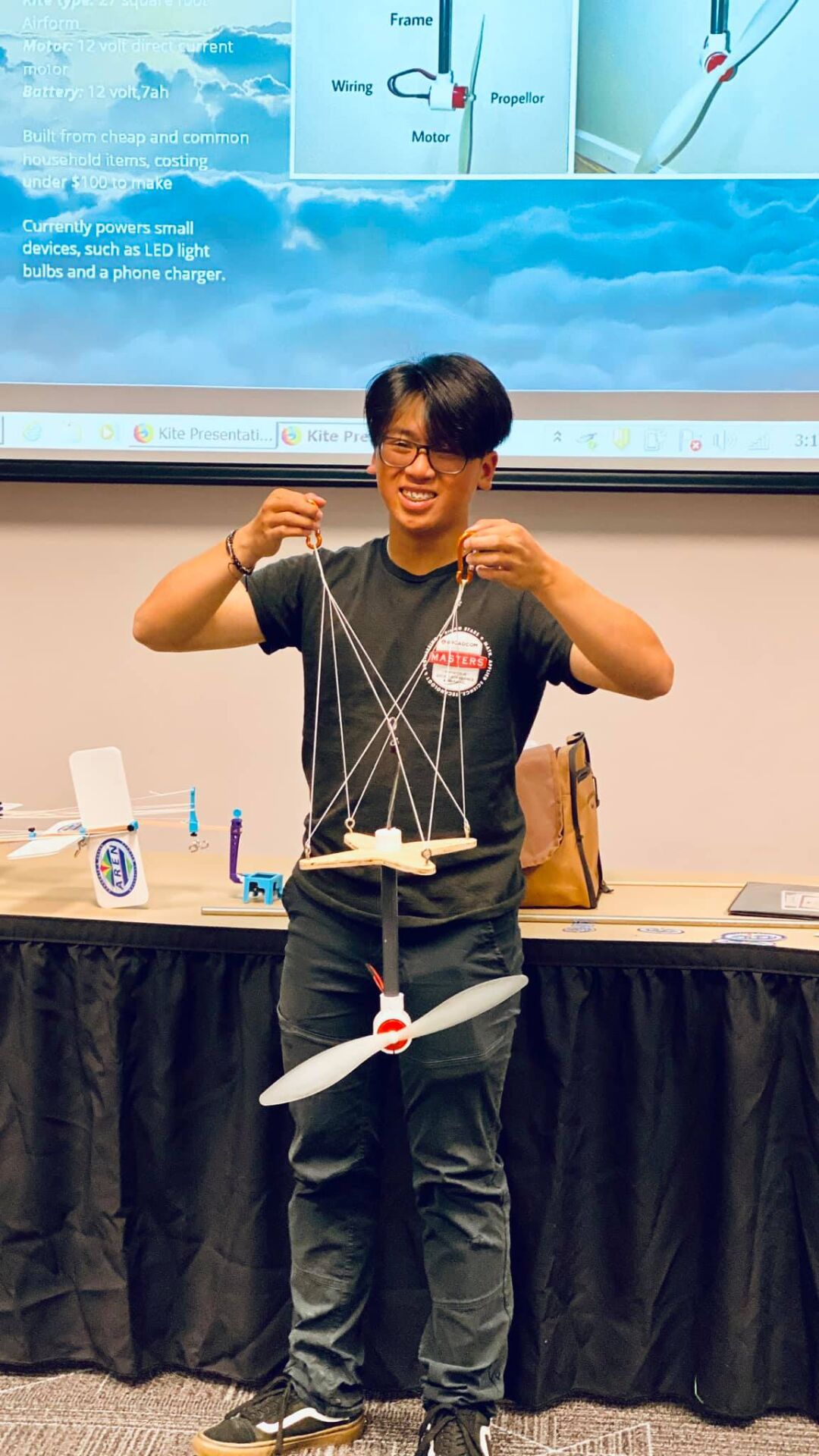 Nguyen presents one of his kite inventions at a science fair.

In a world where most teenagers are hooked to their smart phones, 16-year-old Dylan Nguyen has his hands full of something entirely different — kite strings.

The teenager is an American Kitefliers Association Grand National Champion, but recognizes most people have no idea what that means.

“It’s similar to ballet, or maybe figure skating,” Nguyen said. “Kite flyers can compete with each other by flying a choreographed routine that is scored by judges.”

At his first convention in 2019, he brought home seven gold medals.

“He may be the youngest to win seven titles in one convention,” added his mother, PV Nguyen.

The Nguyens would describe themselves a “kiting family.” PV and her husband, Khanh, have two sons, Dylan, and his younger brother, Cardin. They live in the Portland area and are regulars at the Washington State International Kite Festival in Long Beach, Washington.

Dylan doesn’t hesitate to get involved with his older peers at the festival, reaching out to them to organize several events each year. In 2019, he put together one event that involved getting the largest amount of people together to fly a stack of kites. That’s when a single person operates multiple kites attached to each other while maneuvering tricks set to music, a skill Dylan describes as “getting a truck to behave like a sports car.”

But that was before the world shut down. The pandemic meant flying in big groups together came to a halt until this week. The Washington State International Kite Festival has returned in 2021, and continues through Sunday.

The new future of kiting

Like many families, the Nguyens wanted to help health workers during the onset of the pandemic. Dylan found himself making masks, and discovered his new skillset behind the sewing machine could also translate to his favorite hobby. He started sewing his own kites.

But he didn’t stick to traditional methods. During the pandemic, his school robotics team was limited to digital creations with software. He used the new experience he had in that format to expand on his ideas for kites. Now he’s even utilizing a 3D printer to also create his own parts.

“Being able to create custom parts allows me to get into the more innovative part of kite making,” said Dylan. “Using robotic parts, I can start creating kites that are dynamic and can change shape in the air. There’s a lot of things I want to do now.”

Dylan doesn’t just see kiting as a recreational activity, he believes it has potential to save lives. He’s even created kites that can serve as a power source, generating electricity.

“When I was flying my phone would run out of battery and I wanted to charge my stuff,” said Dylan. “If my phone died it wasn’t like I could plug it in, I was at the beach.”

Inspired by a sci-fi movie, he experimented to create a kite with features similar to a wind turbine. Eventually he was able to generate and store enough power to charge his phone or even operate minor appliances.

He’s presented his inventions at both local and state level science fairs over the years.

Back better than ever

A broad array of new, innovative designs is what professional kite flier and festival veteran John Barresi expects to see in Long Beach this year.

Barresi is a 31-time U.S. kite champion who teaches classes on kite flying, and runs several kite-related businesses. The 46-year-old has been flying kites since he was 15, but has never saw the kiting community create a large digital presence until the pandemic.

“We’ve seen an expansion of groups on facebook and people getting on video more,” said Barresi. “We’re seeing a bit more podcasts and tutorials coming up.”

Barresi believes this new digital age may even convince a new crowd that kiting can be “sexy.”

He leads Kitelife, a team that aims to entertain and engage with the community.

“We’re like AC/DC,” said Barresi. “We fly hard, we fly fast, we have fun and we’re a bit loud. When we land we turn around and talk to people and engage, give them lessons.”

Planning for the return of the festival came with new challenges, according to festival chairman Jane Holman.

“It’s a certain amount of work that’s been compressed into months instead of a year,” said Holman. “We decided to take short cuts on the things we do.”

Holman said the indoor flying events, a kids kite-making event and banquet auction have been canceled as safety precautions.

“There’s no way to sanitize, we just couldn’t deal with it,” said Holman. “This is mostly an outdoor festival, and we’ll have hand sanitizing stations up and down the beach, that sort of thing.”

Overall, Holman believes the nature of the event lends itself well to following health and safety guidelines. Organizers and enthusiasts say the festival will offer many socially distanced opportunities for people who are new to kiting to come and experience their world. A full list of events can be found at kitefestival.com.

“It’s one of the few environments we can all coexist and see each other’s faces,” said Barresi. “We can do things standing apart, but together.”