You are the owner of this article.
Edit Article Add New Article
You have permission to edit this article.
Edit
Our Publications
Home
Area Guide
Arts
Coastal Life
Dining
Outdoors
Halloween contests
Scratchpad
Send us your news
e-Edition
Email Alerts
Share This
1 of 6 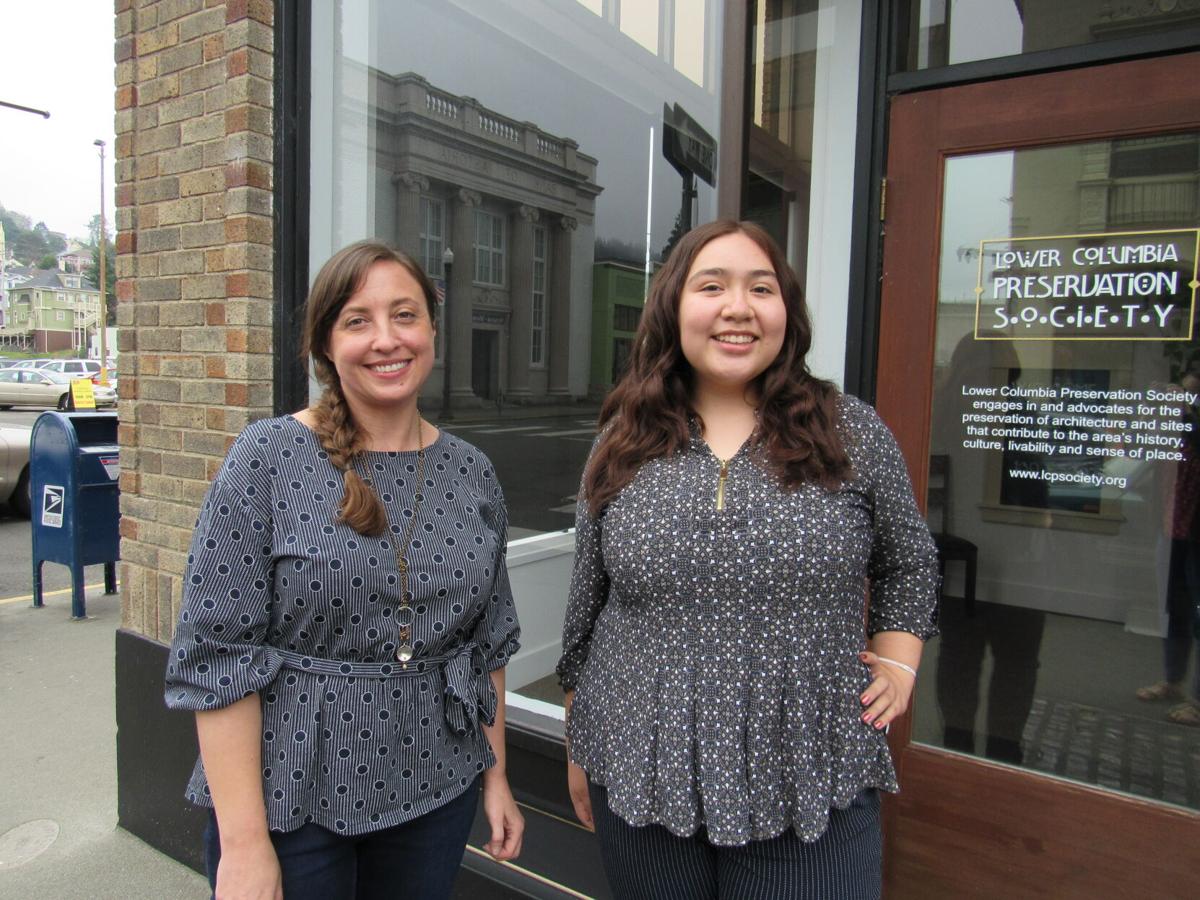 Rachel Jensen, left, and Astronemis Ray. The two collaborated on a new podcast hosted by the Lower Columbia Preservation Society. 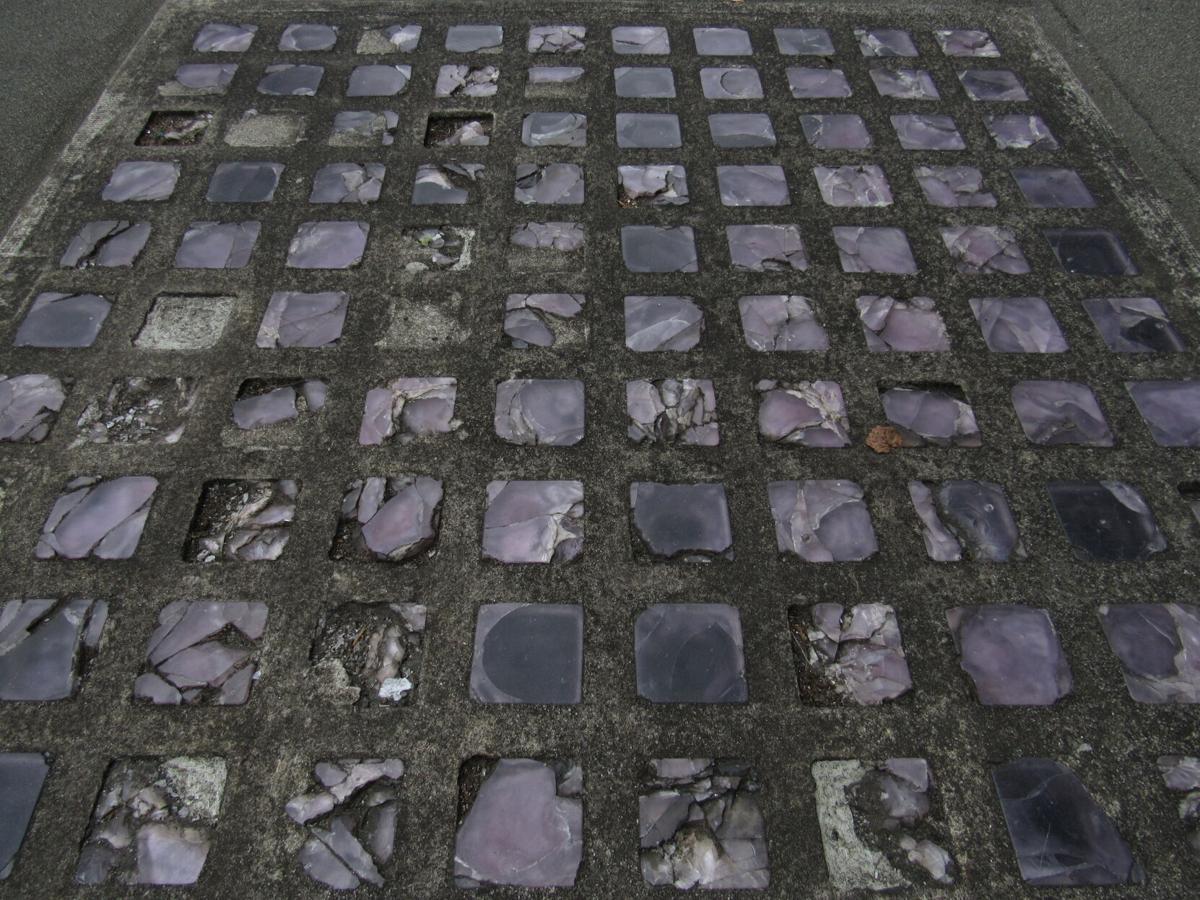 A set of vault lights in downtown Astoria. 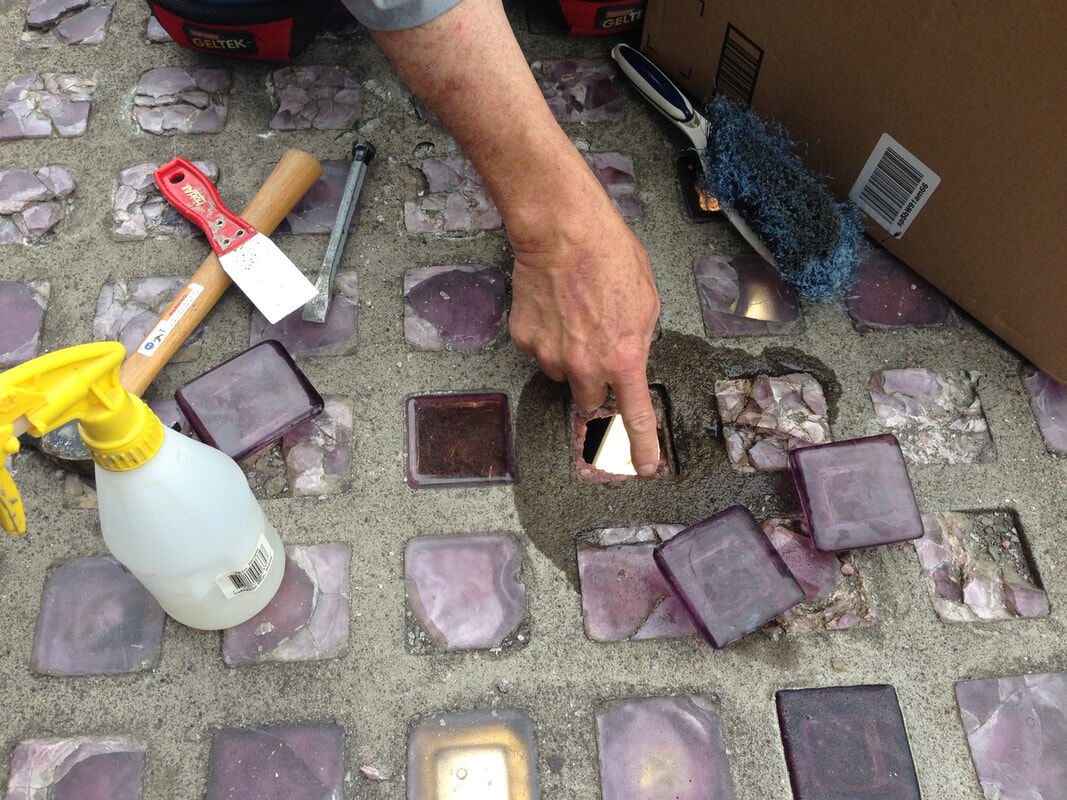 A glass tile is removed before being replaced. 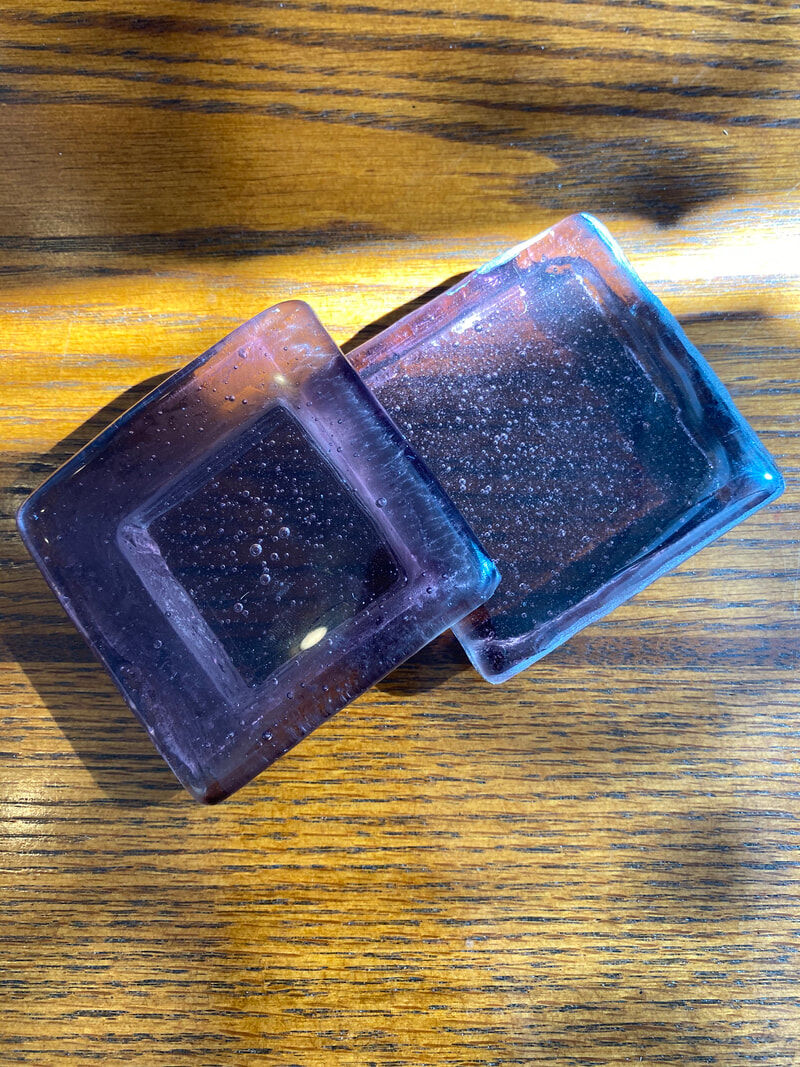 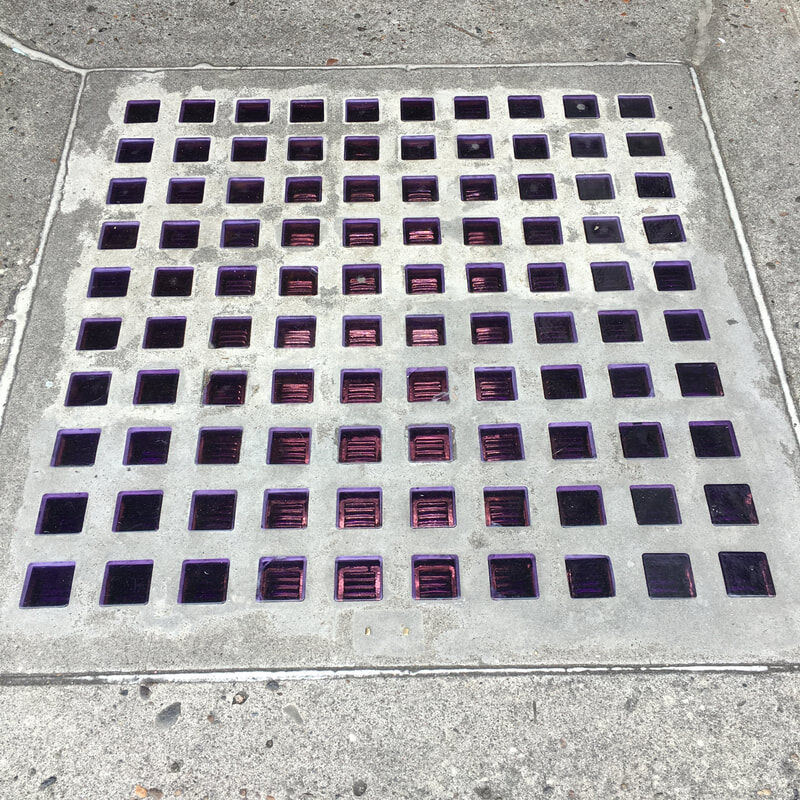 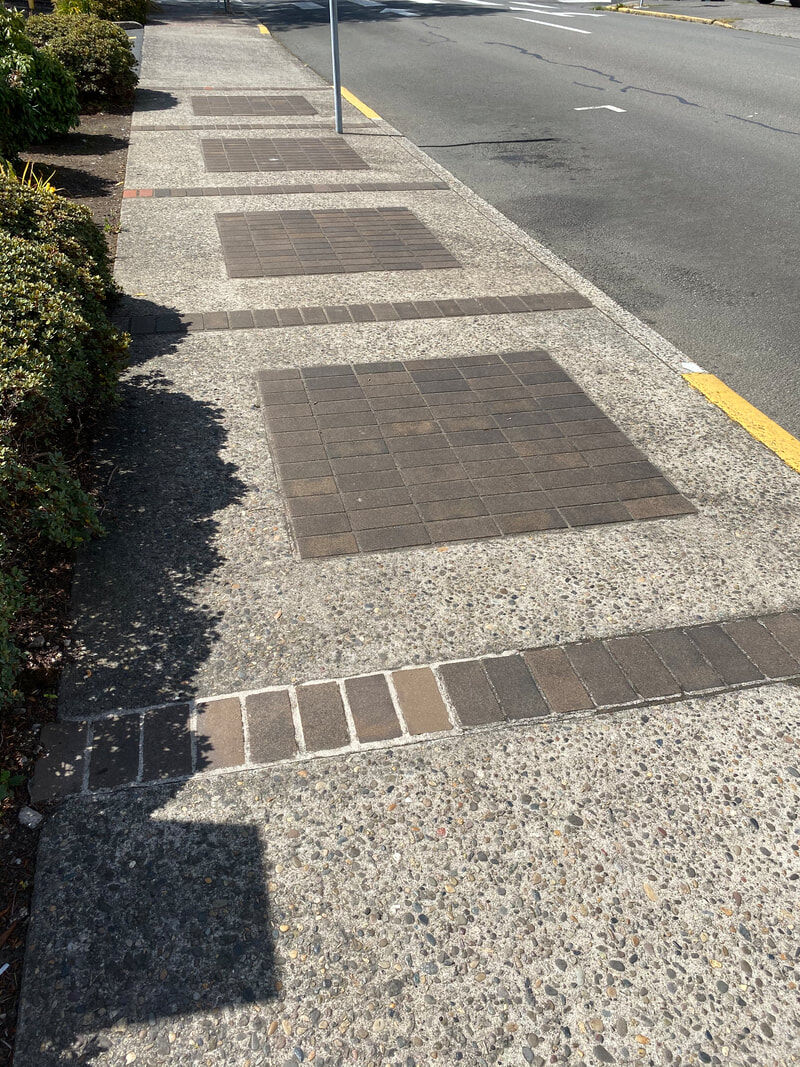 The sidewalk outside of U.S. Bank in Astoria.

If you’ve walked around in downtown Astoria, it’s likely you’ve seen them.

They’re distinct, yet subtle. Sometimes they’re in pristine condition and other times, there’s a broken piece or two.

Vault lights, the colorful sets of sidewalk prisms seen around town, are the focus of a new podcast hosted by the Lower Columbia Preservation Society.

The podcast, titled “The Restoria Podcast,” is hosted by the society’s summer intern Astronemis Ray and includes six episodes. Each episode explores a different aspect of vault lights, like their history or how to care for them, as Ray interviews different vault light experts.

Vault lights were introduced in Astoria after the city’s 1922 fire. In the almost 100 years since being installed, many property owners around town have removed vault light panels or filled in broken light panels.

The removals and updates help explain why some vault light panels are filled with a range of colored glass prisms, and why some parts of Astoria’s sidewalks are unique.

“The podcast was an idea we floated around in the spring. Then we were dealing with our response to COVID and trying to put more resources online so we thought it’d be an excellent time to either do videos or a podcast or something like that,” said Rachel Jensen, the society’s executive director.

Ray graduated from Astoria High School in June 2019 and is now a student at Clatsop Community College, where she’s working on earning a medical assisting certificate and an associate’s degree. She hopes to also take some courses in radio and broadcasting.

Ray has hosted a slew of programs for KMUN as the station’s chief engineer for Astoria Youth Radio. Some of her audio work includes creating a news segment titled “Youth Climate Change News” and hosting another segment titled “Teen Talk.”

After Jensen and Ray met, the two quickly learned that they’d both been raised in the area. While getting to know each other, they ended up talking about vault lights.

“It’s something that we see all the time and that we like but we really didn’t know the background on it,” Jensen said. “So we thought, let’s start with Jeff Daly and see where it goes.”

Daly, who runs the Astoria Underground Tours, is the podcast’s first interviewee. During Daly and Ray’s interview, he explains some history on vault lights and shares some stories about the lights.

“When I was talking to Jeff, he mentioned Ray Merritt and Jamie Boyd when talking about the installation process. Then I thought, ‘Oh, well that’s another thing we can explore — how they’re installed,’” Ray said. “Then we realized the vault lights were being removed at the Norblad building so then I was like, ‘Why were they removed there?’ It kind of just all connected.”

After talking to Daly, Ray interviewed Merritt and Boyd about how vault lights are created and installed. Other episode interviewees include John Nelson, owner of Hotel Elliot, who has worked with Daly to install lights under vault light panels; Paul Caruana, who owns the Astor and Norblad buildings and recently removed vault lights at the Norblad; and John Goodenberger, who discusses the city’s history of vault lights; and Jensen.

“(Vault lights are) easy to overlook but they’re an intriguing topic once we got into it. You always see them downtown but you never really hear about them,” Jensen said. “We have several of them right outside our door (of the society). It’s kind of like a fishbowl because we see people all day long stopping, looking and taking photos of them.”

Earlier this year, the society put up window displays on the vault lights near the society’s entrance so people could learn about them without needing to go inside the society. Ray also created a short video on vault lights toward the beginning of her internship.

“They’re so interesting. In each interview I learned more with each person I talked to. They’re not the same as they were in the 1920s because obviously they’ve changed over time but they still resemble what was once there,” Ray said. “They’re one of our unique everyday surroundings.”

Ray and Jensen suggest listening to the podcast while going for a walk around town to view the lights.

One spot worth looking at is near U.S. Bank, Jensen said.

“We walked over there and were both amazed that we had just never noticed this integrated brick pattern in the sidewalk that may or may not be a reference to the lights but it was still just a unique sidewalk pattern that goes almost around the entire block,” Jensen said.

Vault light panels may also be unique because of weather exposure and how they were made, Jensen said.

While the lights have been around locally for almost a century, they aren’t officially considered to be historic, adding some complications to the process to preserve and restore the lights. People interested in advocating for vault light preservation can join different groups, like the society, Clatsop Community College’s historic preservation program or the Astoria Downtown Historic District Association, Jensen said.

“They’re important to preserve in Astoria because they’ve been here so long. And like it says in the podcast, there aren’t that many panels around. They do have them in some areas but they’re not everywhere. It’s sort of one of those historical things we have in Astoria,” Ray said.

“I think they bring a lot of attraction because you don’t always see them in everyday life,” Ray said. “It’s important to respect the sidewalk and pay attention that this is something that’s historic in Astoria.”