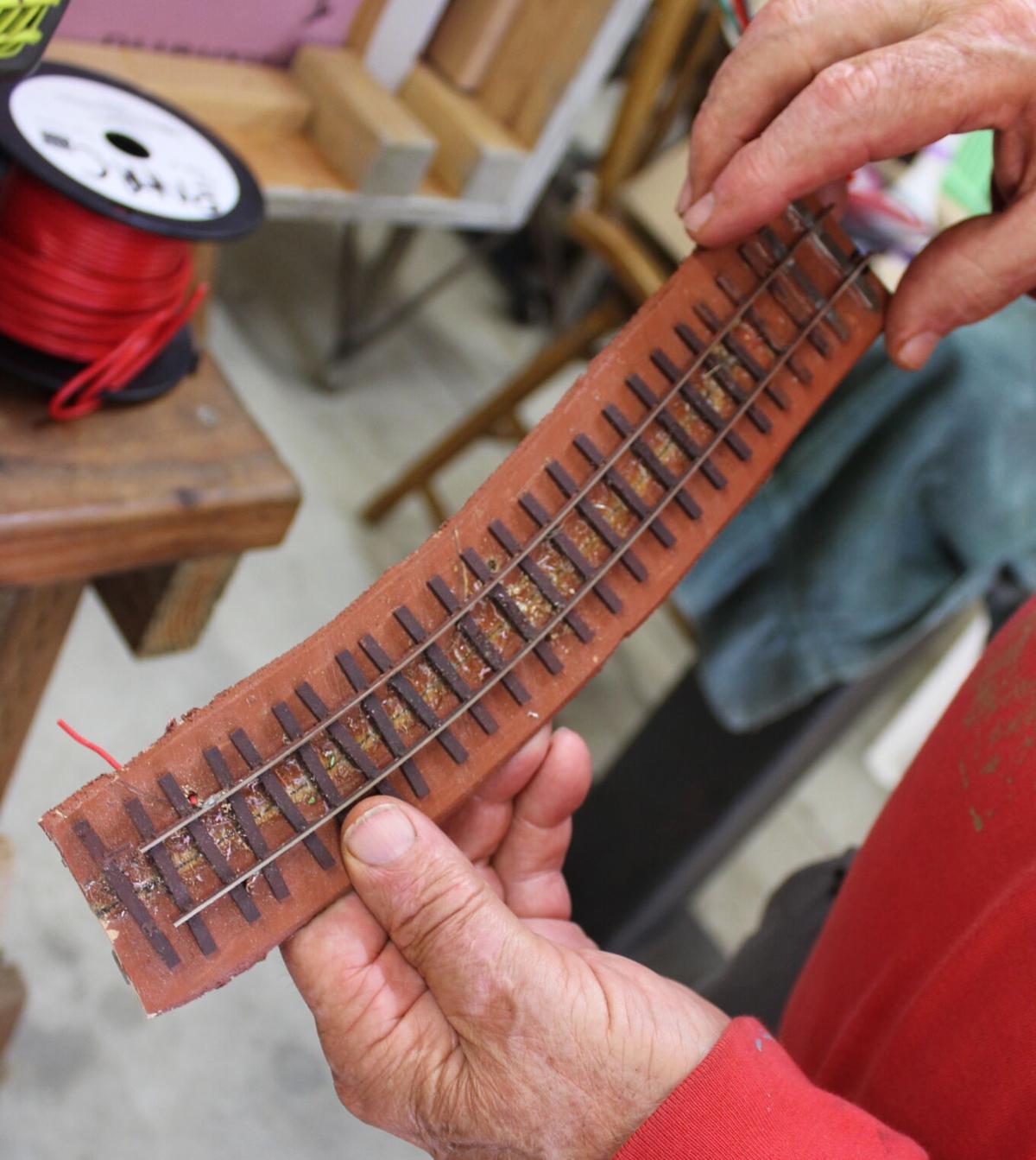 Model railroad enthusiasts share similar enthusiasm for their hobby, but they split into different groups who favor a certain gauge rail. This determines the size of the trains, carriages and buildings. 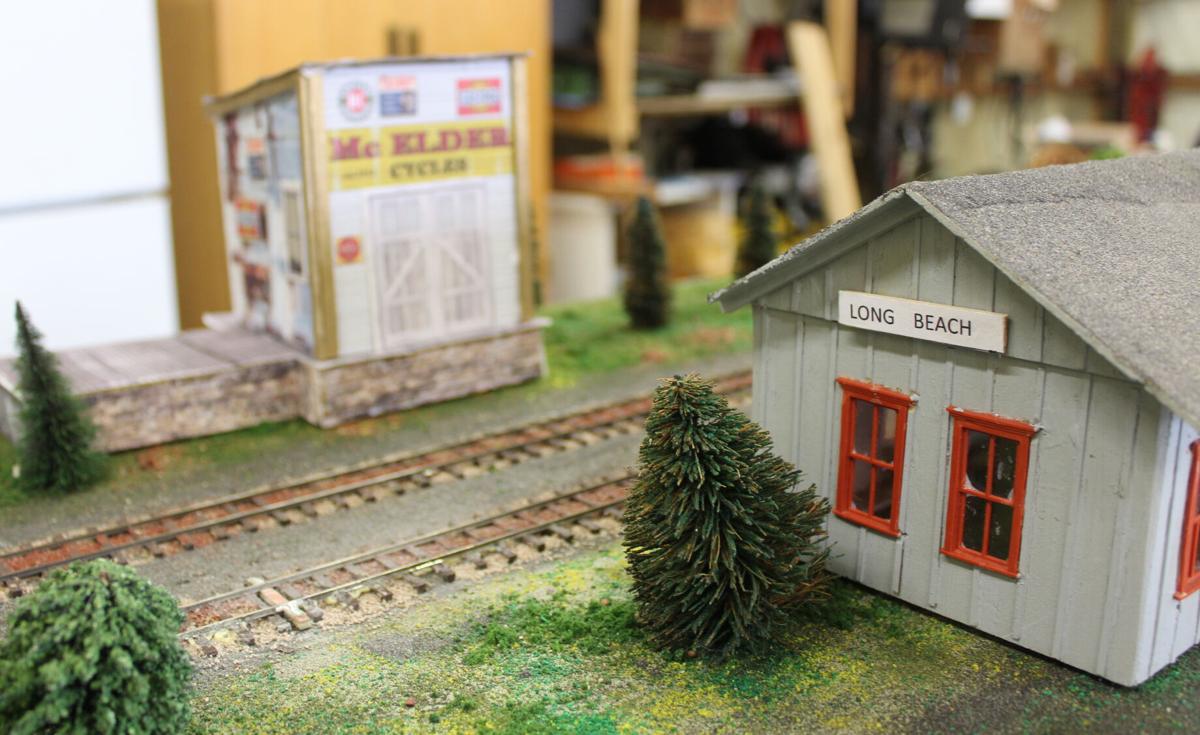 Meticulous detail is required to determine the scale and appearance of buildings, including train stations, depots and foliage surrounding the railroad lines. 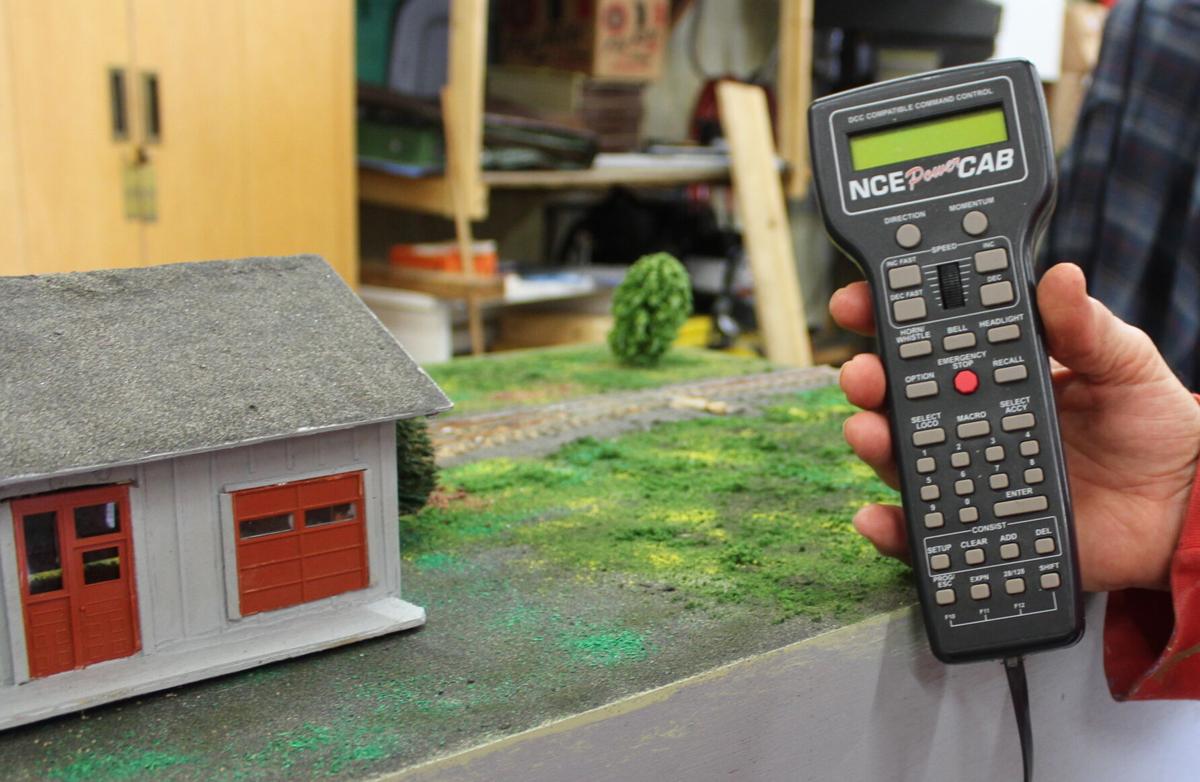 A hand-held controller is attached to a network of electrical wires hidden under the various modules of a display. Sometimes a display will have as many as five trains operated by enthusiasts, each with their own controller. 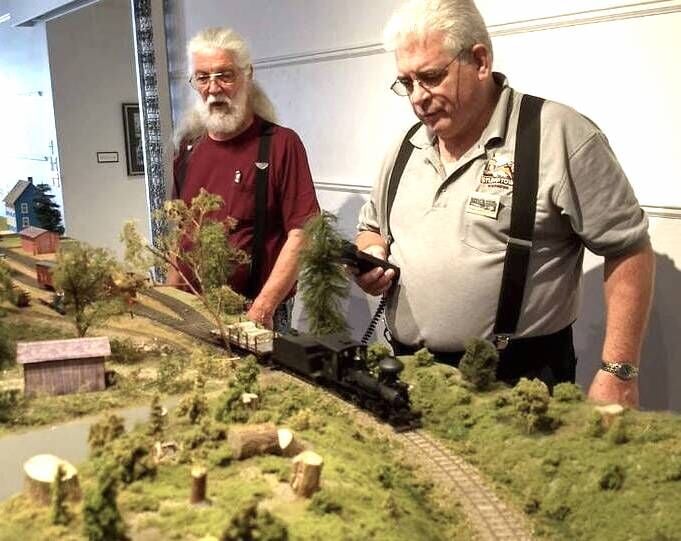 Alan Murray, right, runs a train watched by fellow railroad enthusiast Mark Clemmens at a prior gathering of the annual Clamshell Railroad Days. Enthusiasts run their trains year-round at homes and in their shops, dismantling them and reassembling for shows. 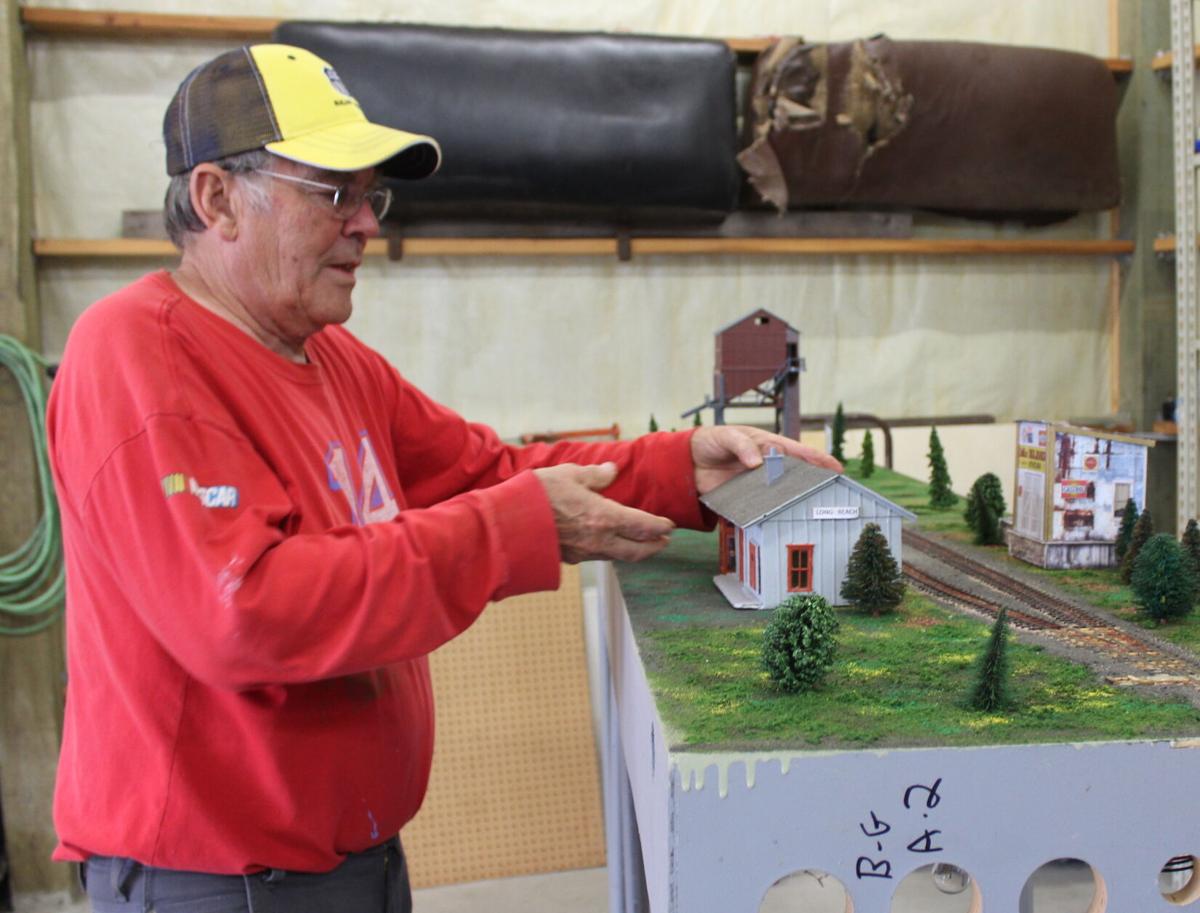 Budd Lather, president of the Peninsula Model Railroad Club, gears up for the annual Clamshell Railroad Days at the Columbia Pacific Heritage Museum in Ilwaco. 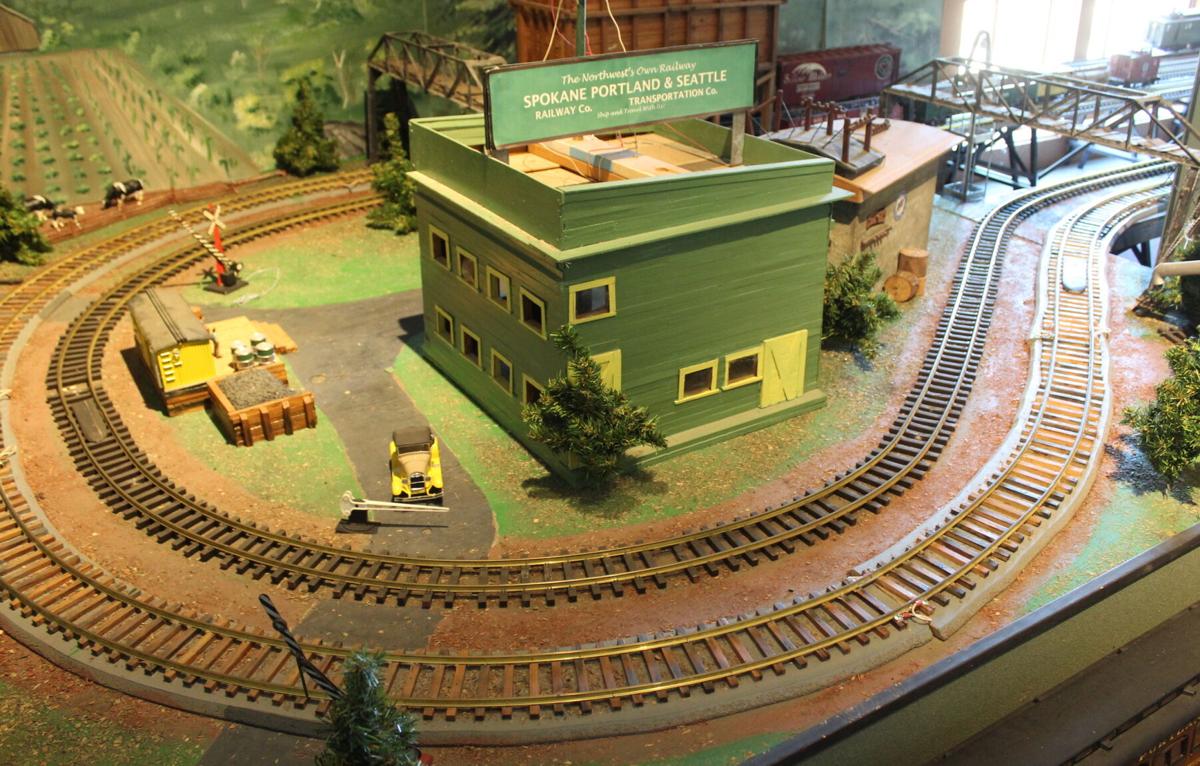 Trains don’t run on the Long Beach Peninsula anymore — except for tiny ones, that is.

The event takes place at the Columbia Pacific Heritage Museum, which reopened earlier this month.

The weekend event is pleasurable work for members of the Peninsula Model Railroad Club, who relax around miniature railroad layouts in their homes year-round. Members carefully pack up their modular designs to share with similar enthusiasts at shows in Puyallup, Washington, and Monroe, Washington.

All the club’s members channel their love for real trains into a devotion to model versions.

Mark Clemmens of Oysterville is the group’s secretary-treasurer.

The hobby was put on hold during his 31-year career sailboat racing in Seattle. When he moved to the peninsula, he worked with volunteers in Astoria restoring a real locomotive, then joined the model club.

“It’s a hobby,” he said. “Some people enjoy the modeling. I enjoy the electrics, the wiring, and a little bit of the scenery and laying track.”

Model train enthusiasts divide into groups who prefer differently sized railroad lines (called gauges, usually with a letter like N, G or HO) which determine the scale of the trains.

Layouts feature carefully measured track and appropriate scale-sized buildings, including depots and stations. Peninsula club members have their pre-built on modular layouts which they clamp together for shows, drastically reducing set-up time. They plug in, adjust control devices, then the fun begins as visitors of all ages watch.

Sometimes as many as five trains are running simultaneously.

“We run the trains as if we were running the schedule,” Clemmens said. “We are ‘playing trains,’ as if we are doing the real thing, except in miniature.”

Enjoyment is generated as the carefully crafted locomotives reverse, pick up extra railroad cars, attach them safely and chug into a yard or station.

“For some people, it’s just watching the trains go around and around,” he said.

In his youth, older kids away at college would spend weekends home in Michigan and travel back to Chicago on “Sunday Flyers.”

“We got hooked on trains as a kid,” Lather said. “We knew people that worked for the railroad.”

Lather is the club’s president. One of his fondest memories as a high school student in Seattle was accompanying his eighth-grade sister on a two-day adventure to a wedding in the early 1960s.

“We spent nights sleeping in recliners and spent all day in the observation car,” he said. “A hamburger on the train was $5 then — we were broke by the time we got to Chicago.”

Later, memories of watching real trains at Ballard Locks in Seattle and a more recent preservation project in Portland rekindled his interest. He moved to Ilwaco 10 years ago and now has a 20-foot model layout above his garage.

A variety of stage displays will be available to view, hosted both by visiting clubs and local residents.

Those attending the Clamshell Railroad Days can enjoy one of only two opportunities during the year to climb aboard the museum’s largest artifact. The Nahcotta, a refurbished passenger train coach built by the Pullman Palace Car Co. of Chicago, will be available from 10 a.m. to noon and 2 p.m. to 3:30 p.m. each day.

The coach was attached to trains that ran from 1889 to 1930 on the local narrow-gauge line. This was nicknamed the Clamshell Railroad and gives its name to the annual event. The Cranberrian Fair in October is the only other time the real rail carriage is open for public viewing.

The museum, housed in Ilwaco’s old telephone company headquarters, which was built in the 1960s, features a recreation of elements of the Ilwaco Rail & Navigation Co.’s freight depot, which served as the south peninsula’s commercial transportation hub in the early 1900s.

Upstairs in a permanent fixture is a display created by Arthur Shumway highlighting the Spokane Portland and Seattle Railway Co. On the museum’s changeable wall featuring “Peninsula characters,” are portrait photos of Ilwaco railroad pioneers Edwin and Lewis Loomis.

For children, there will be storytimes in the Nahcotta at 1 p.m. each day. There will also be kids’ take-and-make kits available from the Ilwaco Timberland Library.

Admission costs $5 and is valid both days; children under 12 get in free