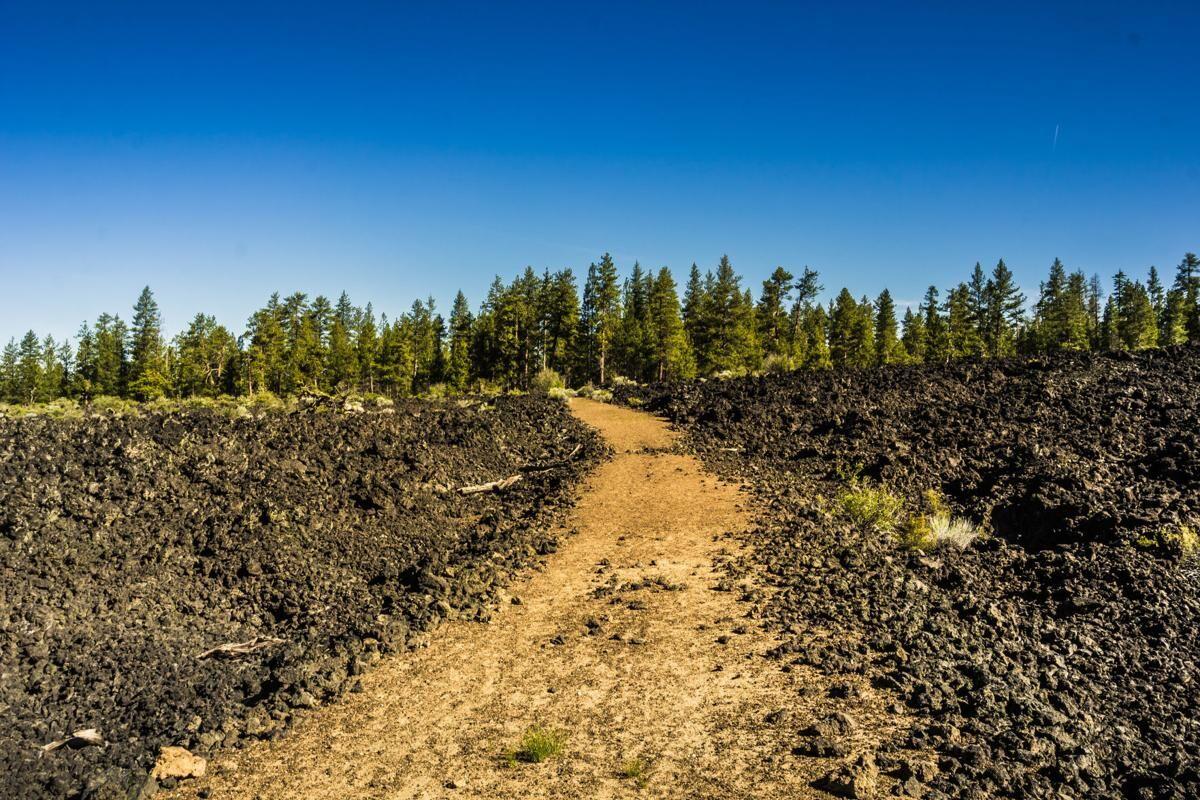 The trail through the lava field at Hoffman Island. 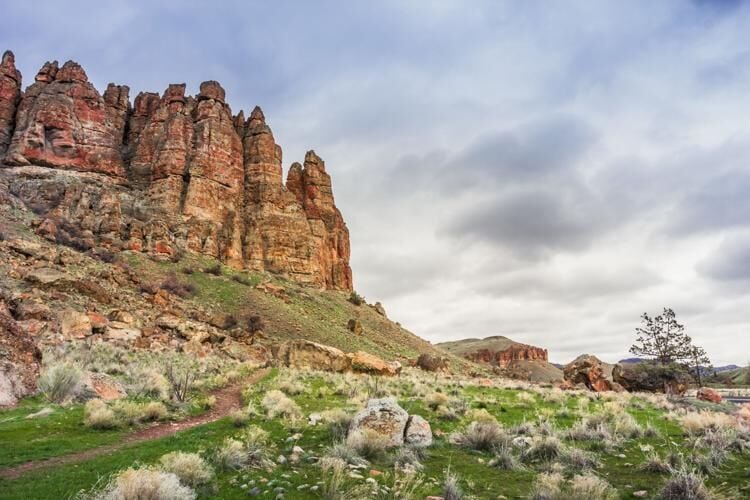 The Clarno Palisades, an ancient rock feature formed 54 to 40 million years ago, still holds fossils of plants from the semi-tropical climate of ancient Oregon. 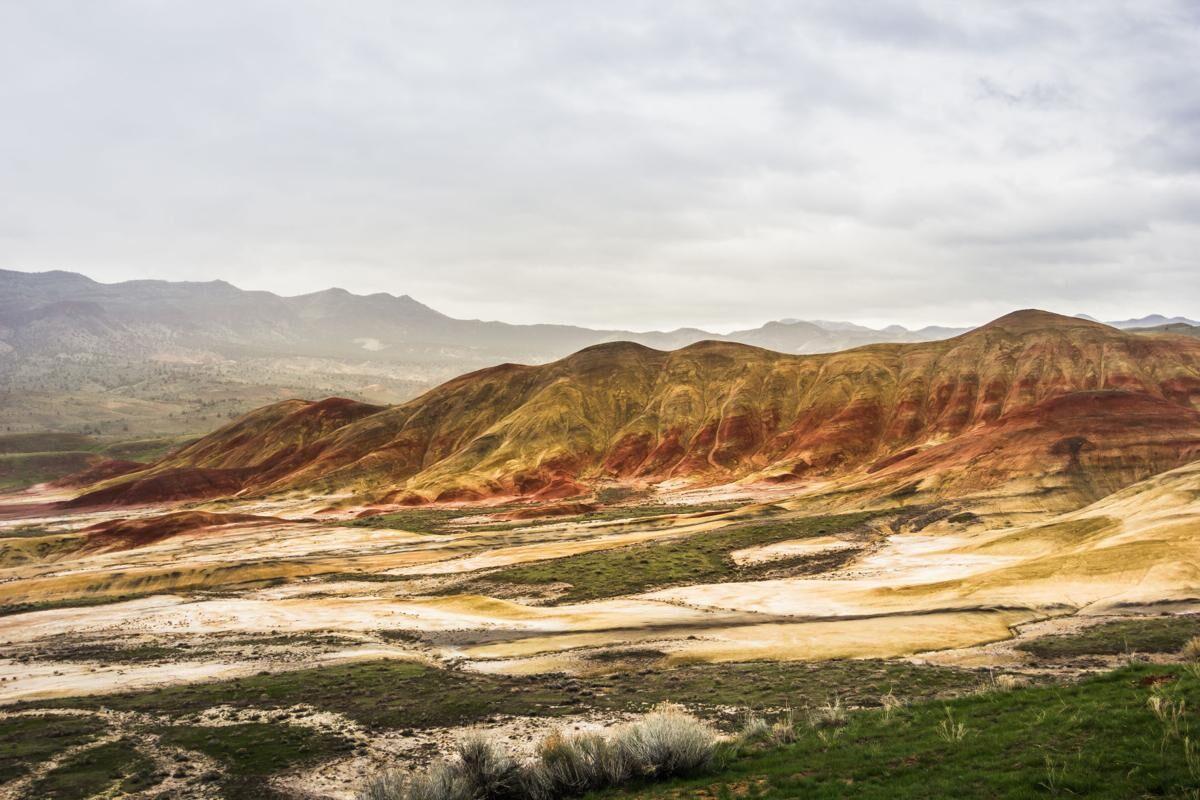 A view of the Painted Hills from the Overlook Trail.

Recent images from Mars might have you longing to blast off and explore the final frontier for yourself. But faster than any travel for a continuing mission, you can explore these Oregon vistas to give you that spacey feeling, no astronaut training required.

Probably the most “out there” view you’ll get in Oregon, the Painted Hills is regarded as one of the state’s seven wonders.

Part of the John Day Fossil Beds National Monument, these colorful hills made of paleosols, or ancient soils, tell their geologic story on each hillside with every color indicating a different ancient climate. This is also a place where hundreds of varieties of leaf and nut fossils have been found indicating the more temperate life that thrived here around 33 million years ago.

The best trail to get that Martian experience is along the Painted Cove Trail. Here, wooden, raised boardwalks wind through the deep red hills giving visitors that up-close look at these beautiful hills.

The stunning hills are incredibly fragile so stay on designated trails while visiting and take only pictures.

The Clarno Unit of the John Day Fossil Beds National Monument is also the least visited of the three designated areas of the monument. Located 18 miles west of Fossil, the smaller site has four trails that stretch below the towering palisades that have been eroded by time and wind.

Like all of the units, this one also is home to many animal and plant fossils some of which can clearly be seen in the large boulders along the sides of the trail. These are left from a semi-tropical forest that existed here 44 million years ago and was swept up in volcanic mudflows, called lahars and deposited here.

The palisades are eroded lahar deposits with striking red colorations that deepen in the rain.

The unit’s Geologic Time Trail has signs posted beside it that indicate the changing in time with each food representing 37,000 years which makes a great tool in visualizing how much time has passed.

The playa out in one of the more remote corners of Oregon sits in the impressive shadow of the Steens Mountain.

Alvord Desert is only about 20 miles long and receives most of its rainfall and moisture over the winter, thanks to runoff from the mountain and can at times become more of a lake. When it gets wet, it gets muddy so one can easily get stuck out on the flats.

But when things dry out, the ground hardens and the wind can often howl over the plain creating the desolate and alien-like landscape that could be found in the worlds of Edgar Rice Burroughs.

Closer to home, though best explored during the summer after the snow has melted, the lava rock-filled places of the Newberry National Volcanic Monument resemble a lot of what could be found out on other tertiary planets and moons. In fact, during NASA’s Apollo program of the 1960s, a handful of astronauts trained in these lava fields to test their equipment and maneuverability along the rocky terrain.

If you want a really secluded space-filled hike, Lava Cast Forest is more tucked away than its neighbors in the monument. Here you can explore hollowed-out casts of trees that were burned away when lava came spewing out of the fissure off the side of Newberry Volcano thousands of years ago.

Even more out of the way is the trail to Hoffman Island, a kipuka, or an island of trees surrounded by the jagged lava rock beyond it.

Still not enough space?If you want your own guided tour of the cosmos, head to Sunriver to the Oregon Observatory and check out space through its telescopes and a closer look at those billions of stars.

The observatory is currently open for private daytime viewings. Private tours and experiences can also be arranged. All entry is time-specific and tickets must be purchased in advance online at snco.org.

The Pine Mountain Observatory is also a great place to catch a better peek at the cosmos but is only open seasonally on weekends during summer. This observatory perched high above the high desert on Pine Mountain is operated by the University of Oregon Department of Physics. For more information, visit pmo.uoregon.edu.