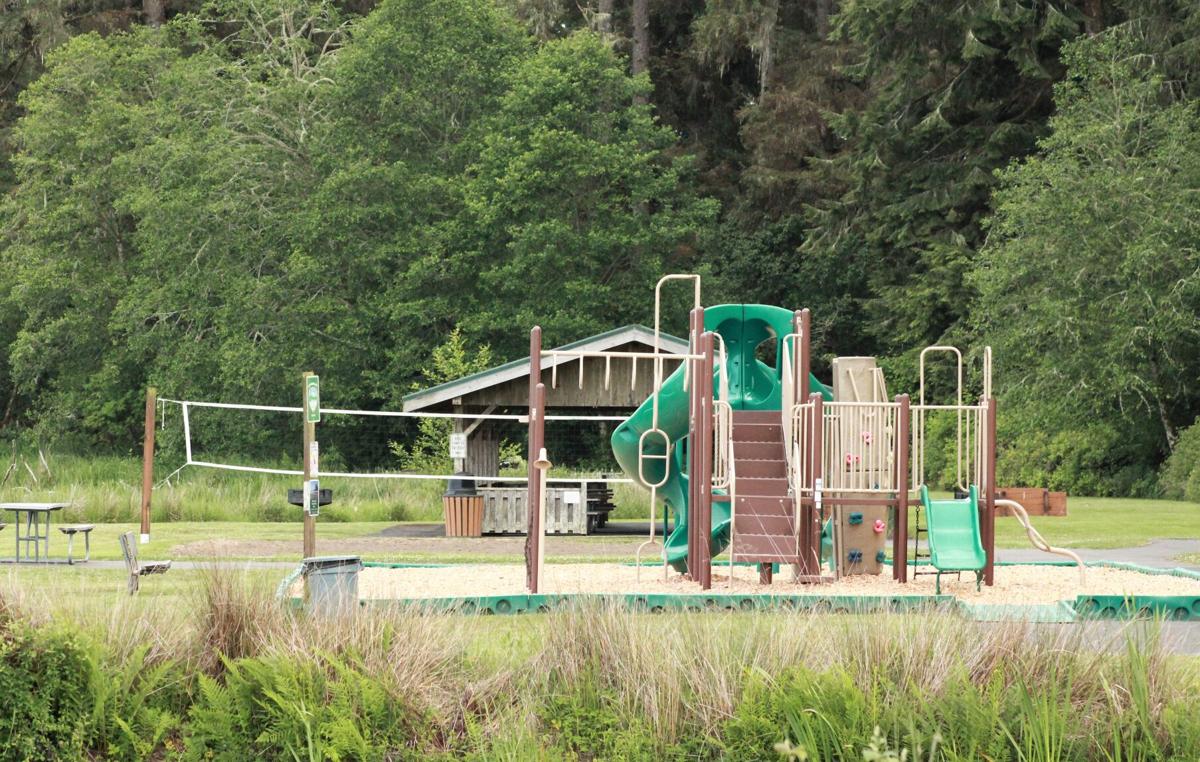 A playground next to the lake. 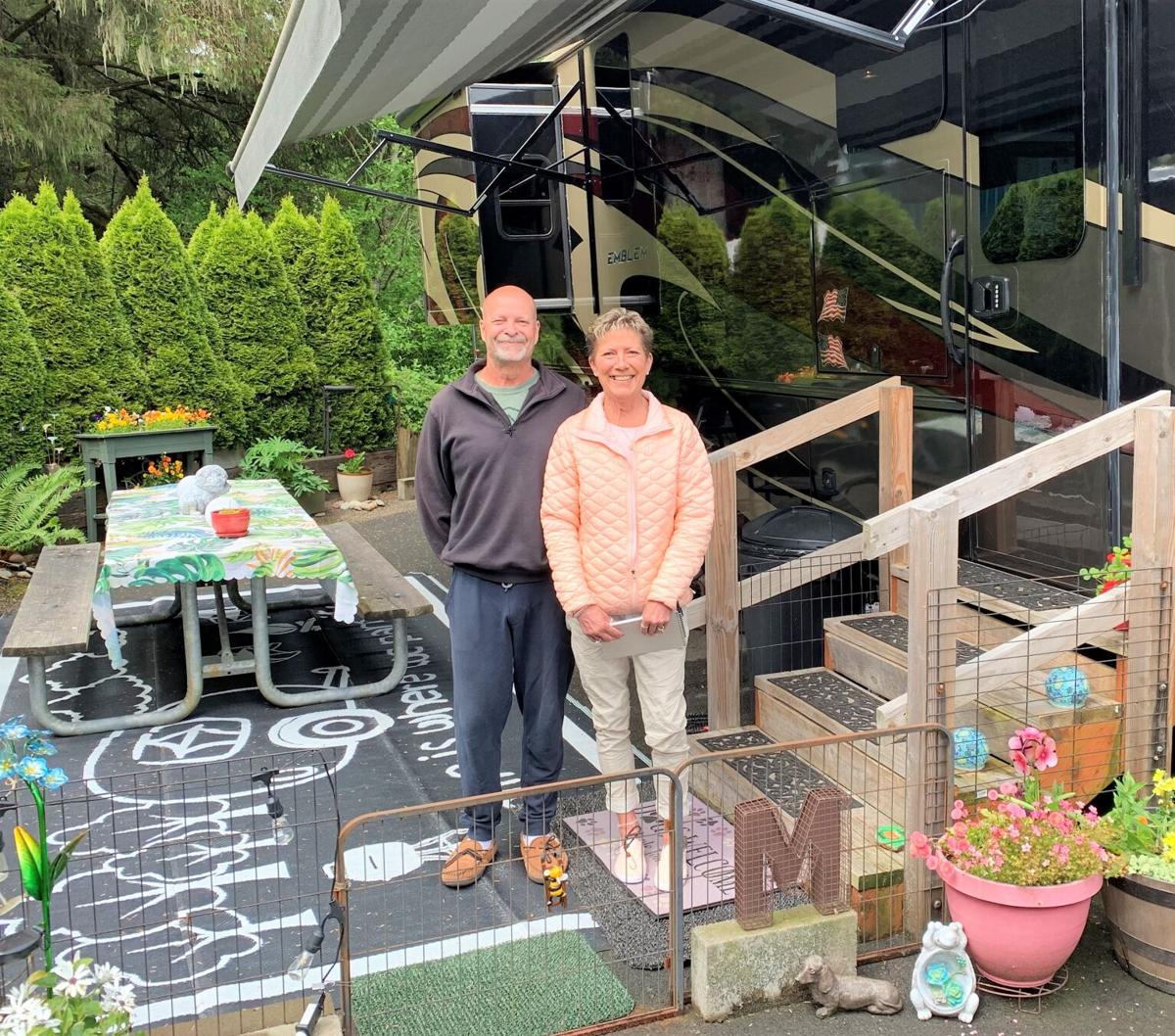 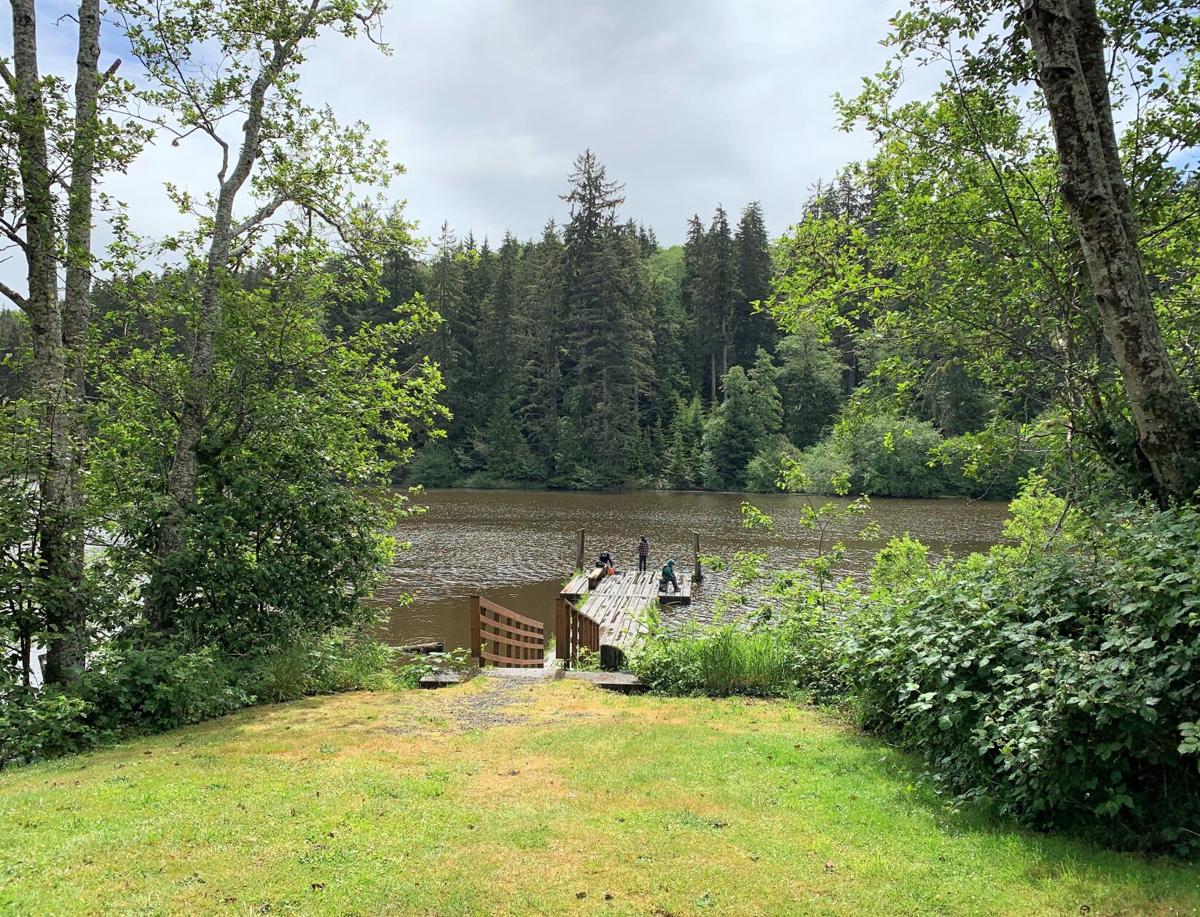 A group of people fish from a dock.

An entrance to Cullaby Lake. 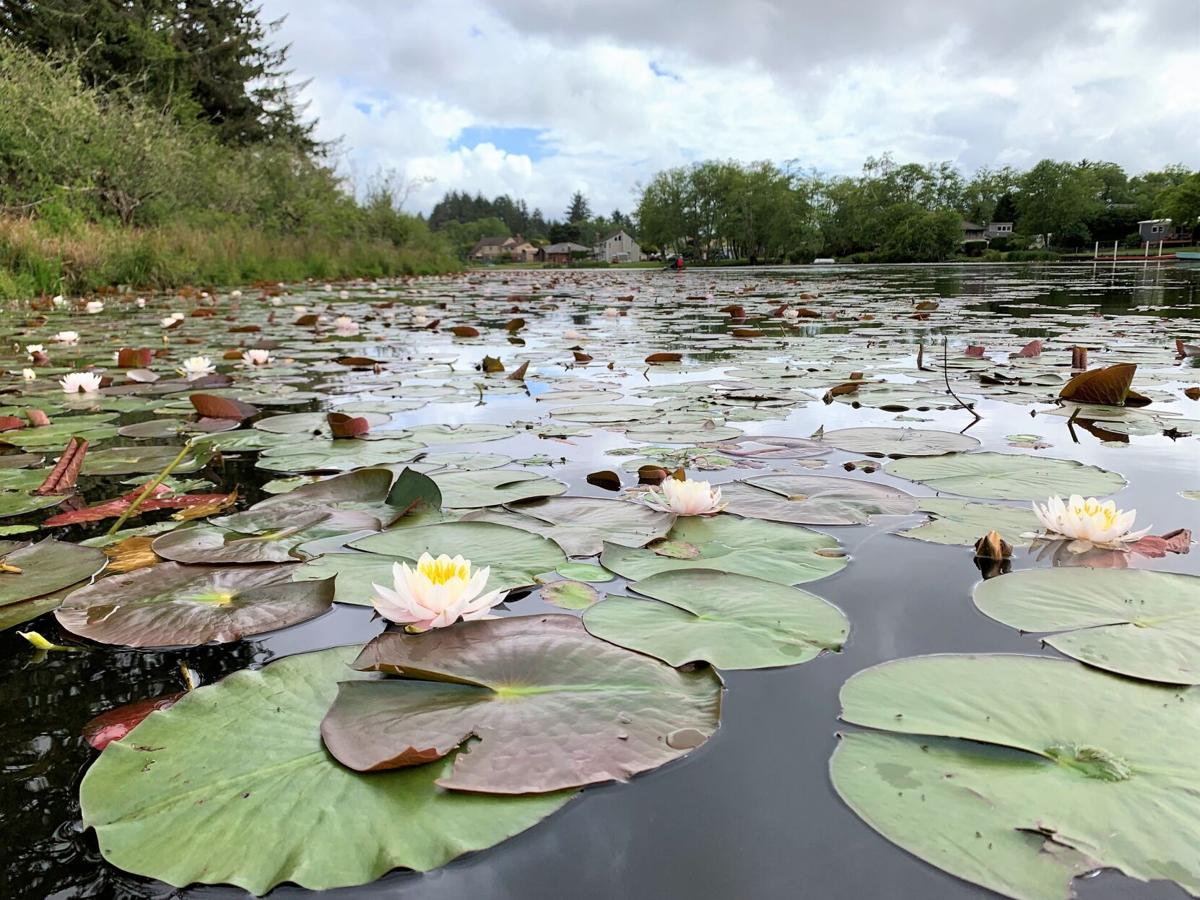 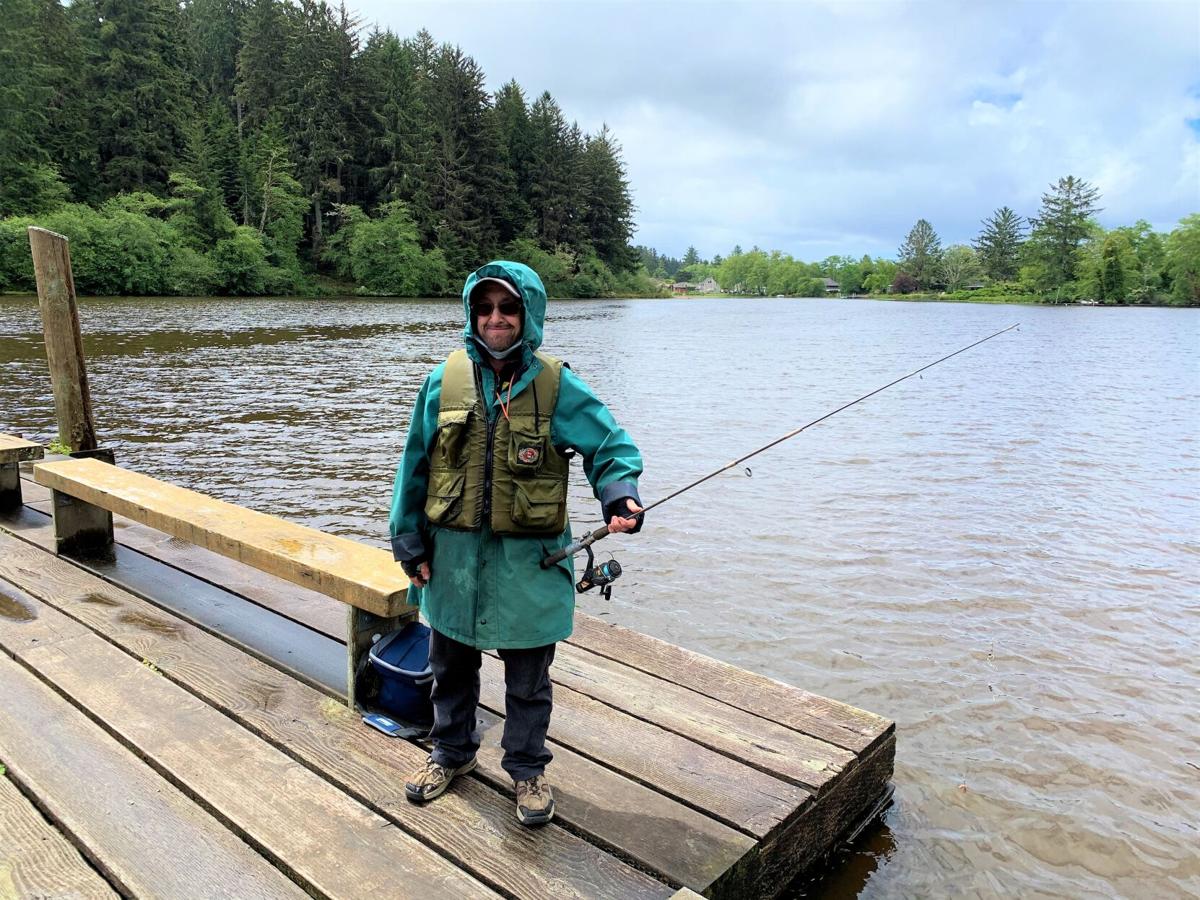 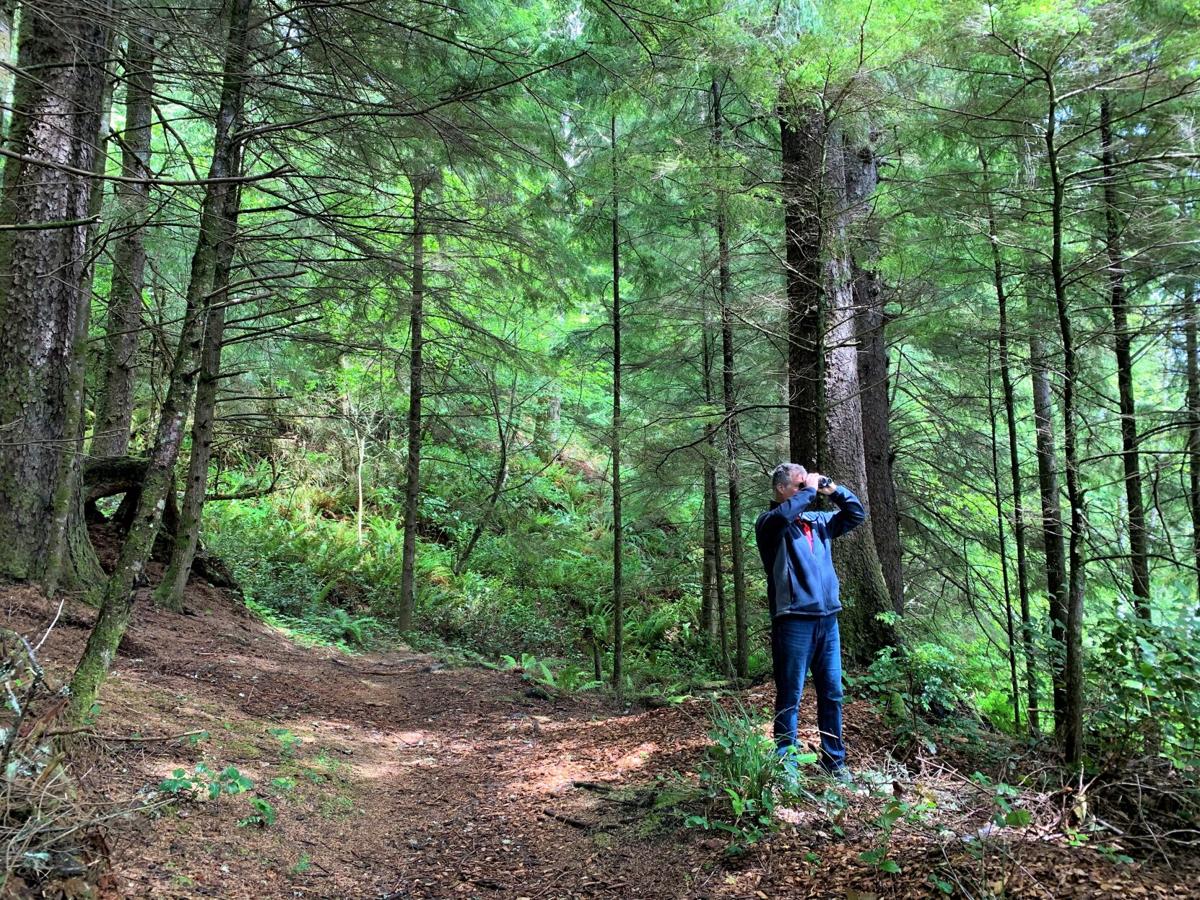 A birdwatcher pauses during a hike. 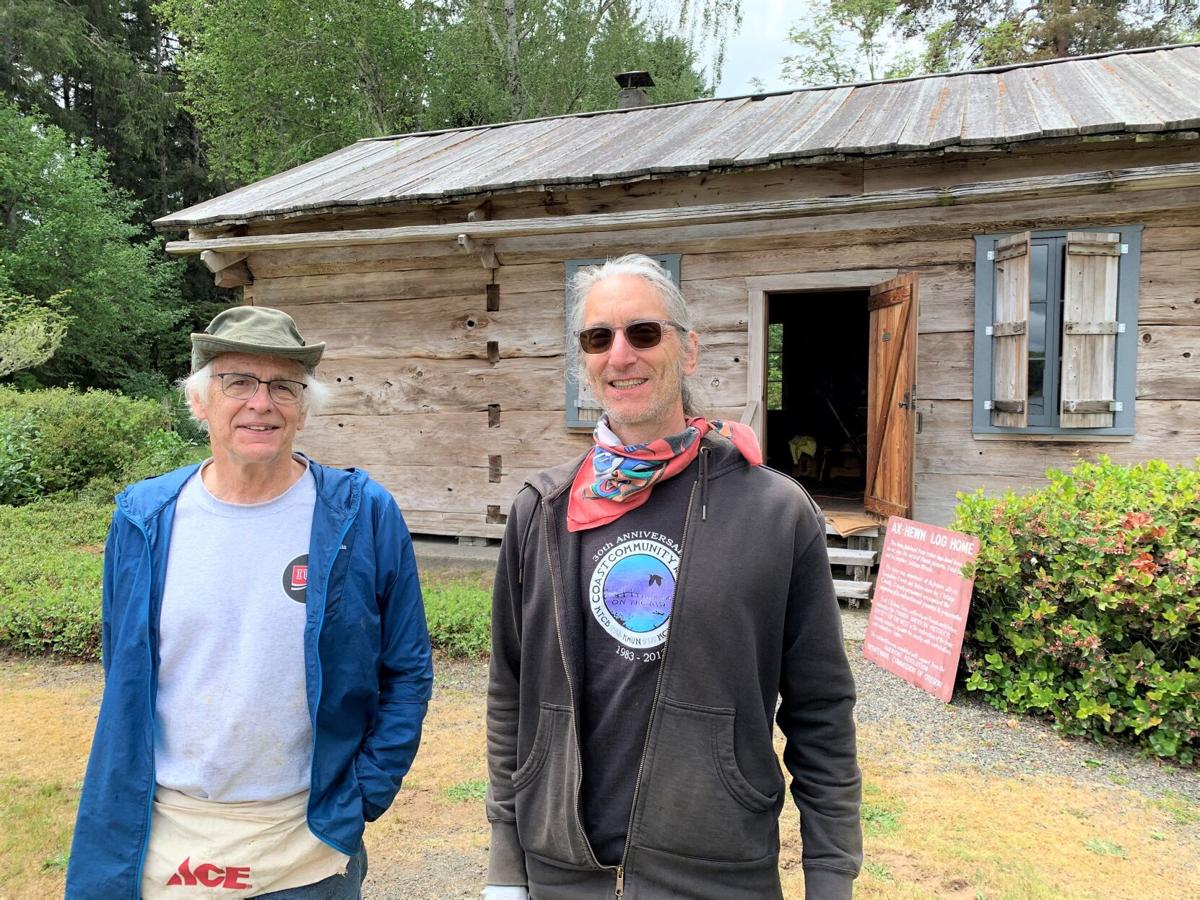 Tucked off U.S. Highway 101 just south of Warrenton, the parks offer a large lake for water sports and fishing, a children’s swimming area, picnic shelters, walking trails, a historic cabin and a playground.

Cullaby Lake is maintained by park hosts Stephanie and Bill Murray. They live on-site and help set up the park for parties, sell park passes and lock the park gates at night. The couple has held the job for three years.

“I live on 164 acres of forest and beautiful scenery. Can’t beat living here. This park is a local hidden gem … We feel really blessed to be here,” Stephanie Murray said.

Winter is quiet at the lake but summer is “really busy,” Stephanie Murray said. The lake is no more than 9 feet deep at its deepest, so it gets warm in the summer.

“It’s a really good kayaking lake. People come out and paddle board,” Stephanie Murray said. “We get a lot of people water skiing, boating, tubing and jet skiing.”

The lake is also a good bass fishing lake and is stocked annually in May with 1,000 trout. There are seasonal bass fishing tournaments.

Both the Gearhart and Seaside fire departments train on jet skis at Cullaby Lake. The U.S. Coast Guard trains for helicopter water rescues in October.

The park’s north and south shelters get booked throughout summer with weddings, parties, reunions. There are lawns, a playground and roped off swimming area next to the north shelter, and a sandy swimming beach next to the south shelter. In the last weekend of June, the park hosted hydroplane races.

There are two hiking trails along the park including the long ridge trail through the woods. Bear and coyote sightings have been reported there. Bald eagles, osprey and blue herons frequent the lake.

One of the trails has a viewing platform near the open marsh and also opens up to an old paved road.

That’s not the only history of the park. A log home built by Erik Lindgren in the 1920s is on the park’s property. On the day of their annual clean up and picnic in early June, several volunteers, guided by Greg Jacob, with Lucien Swerdloff, help clean the grounds as well as the inside of the spacious cabin, which has four side rooms in addition to the large main room. There is a sauna and an outhouse.

Jacob, a retired English professor from Portland State University, and author of the book “Fins, Finns and Astoria,” is also president of the local Finlandia Foundation and helped to organize the volunteers. Swerdloff, Professor of Historic Preservation at Clatsop Community College, sometimes brings students to the cabin to practice restoration.

At the smaller, 30 acre Carnahan County Park, Liam Carson finds the dock at Carnahan Park a good place to kayak and fish.

He shared that the Carnahan Park is often less crowded than the larger Cullaby Lake Park. He said there is a good hiking path through the woods which starts off the parking area.

Carson added that the park is a great fishing spot for children, as there is a lot of small fish. He described the lake as “a good pan fishing lake.”

“The park could be improved by having some life saving devices,” he added.

Whether you enjoy fishing, the splash and speed of jet skis and watering skiing, or the quiet of kayaks and paddle boards, a refreshing swim on a warm summer day, a forested hike, or a sheltered place for a gathering with family and friends, Cullaby Lake and Carnahan County Parks are indeed hidden gems worth exploring.