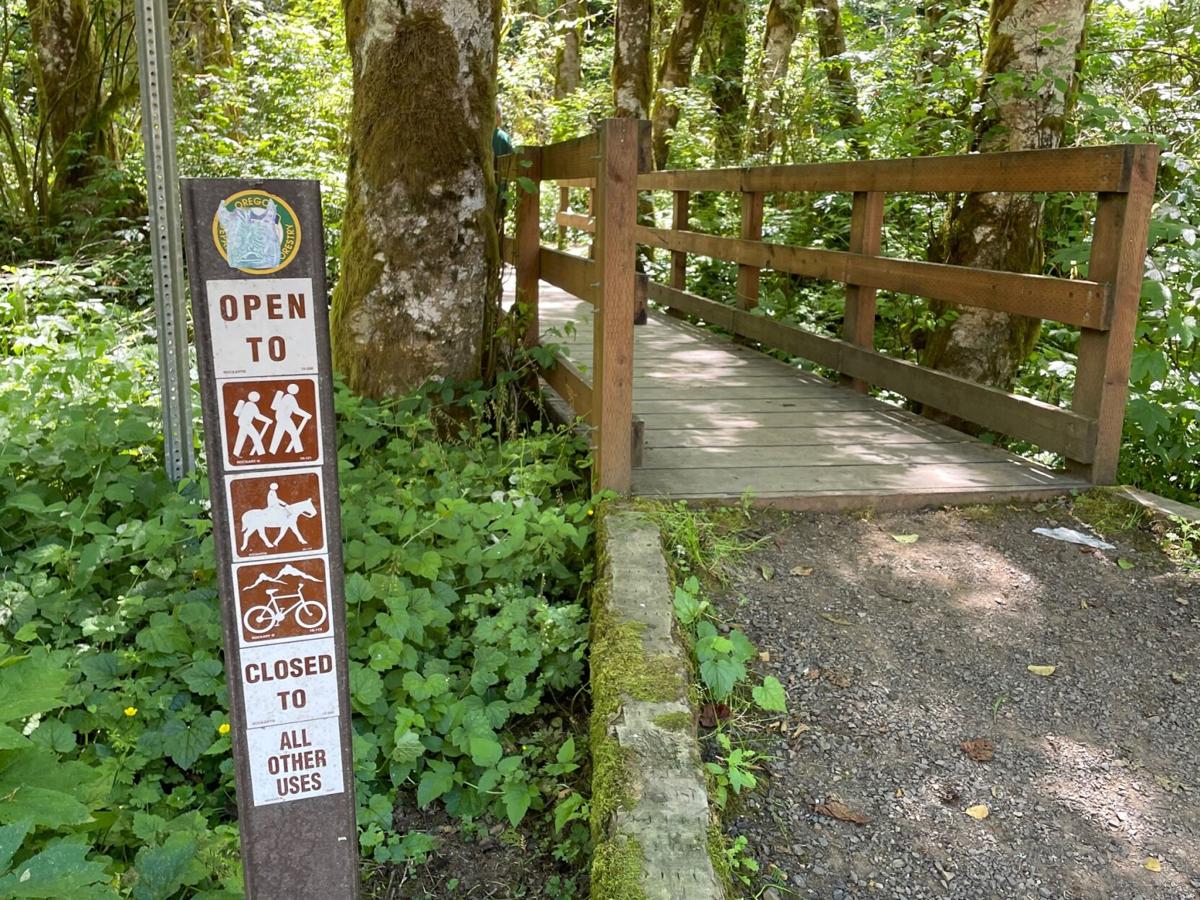 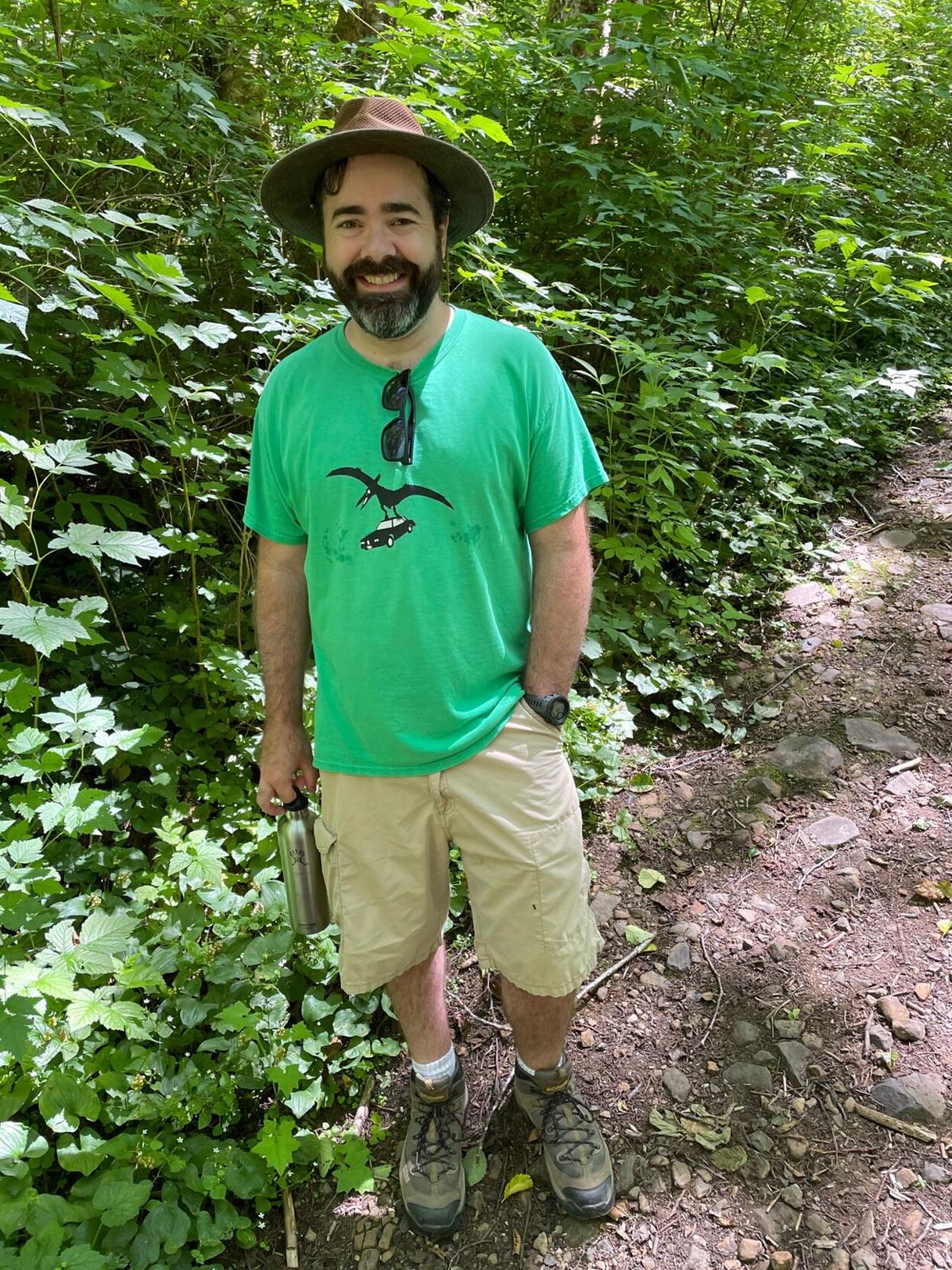 Patrick O'Connelly enjoys the peacefulness of the Bloom Lake Trail. 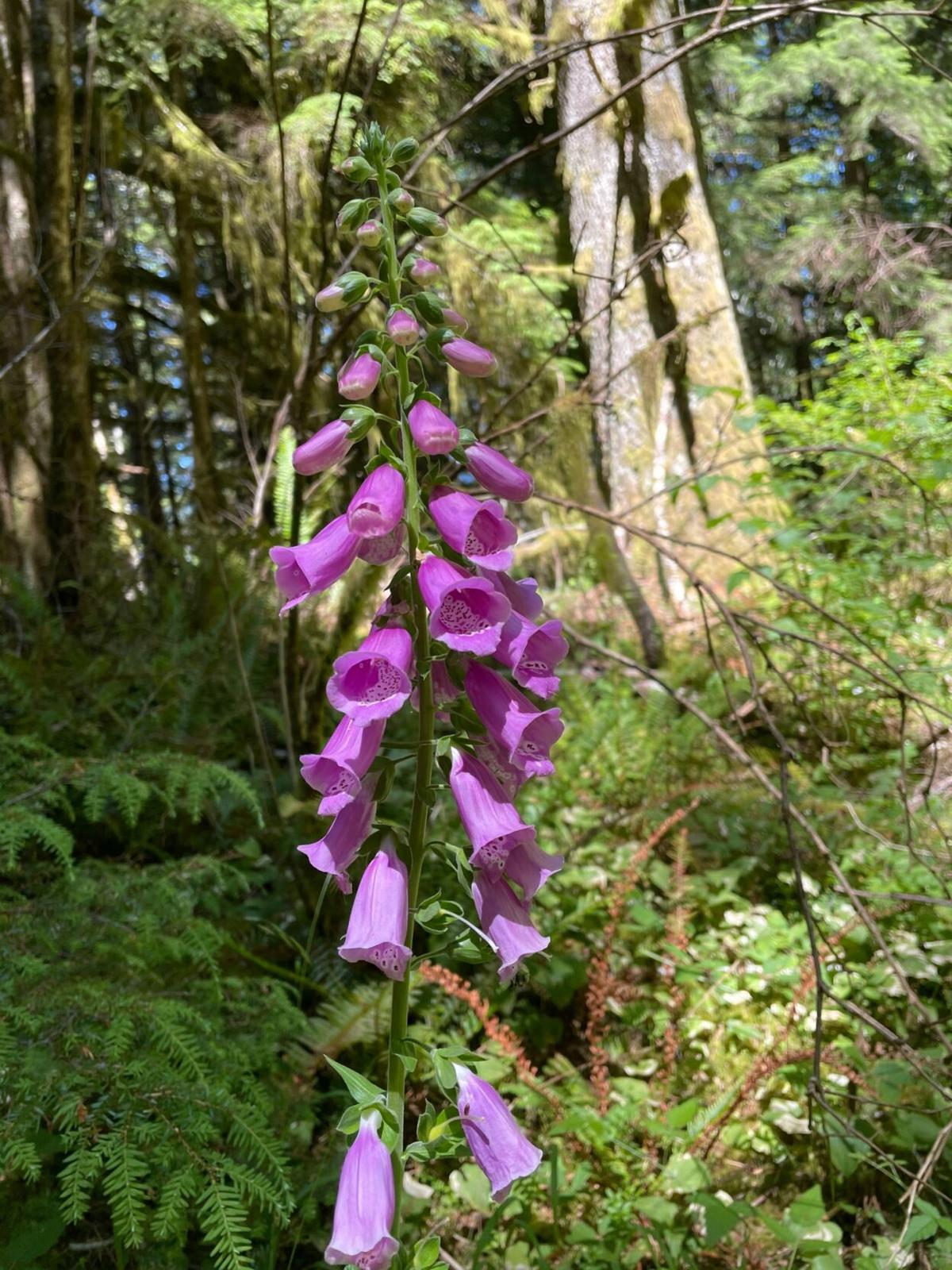 Foxgloves brighten up the trail. 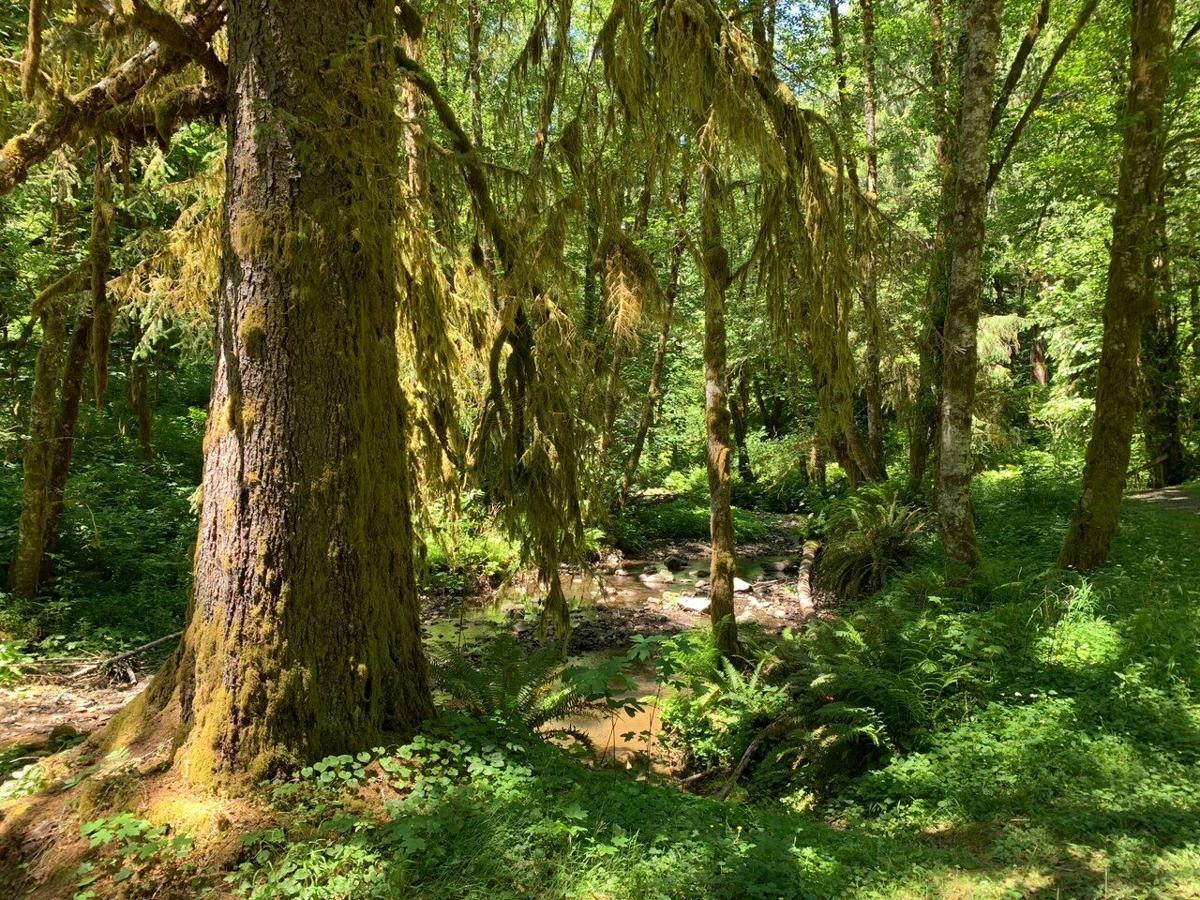 Nature is abundant along the trail to Fishhawk Falls. 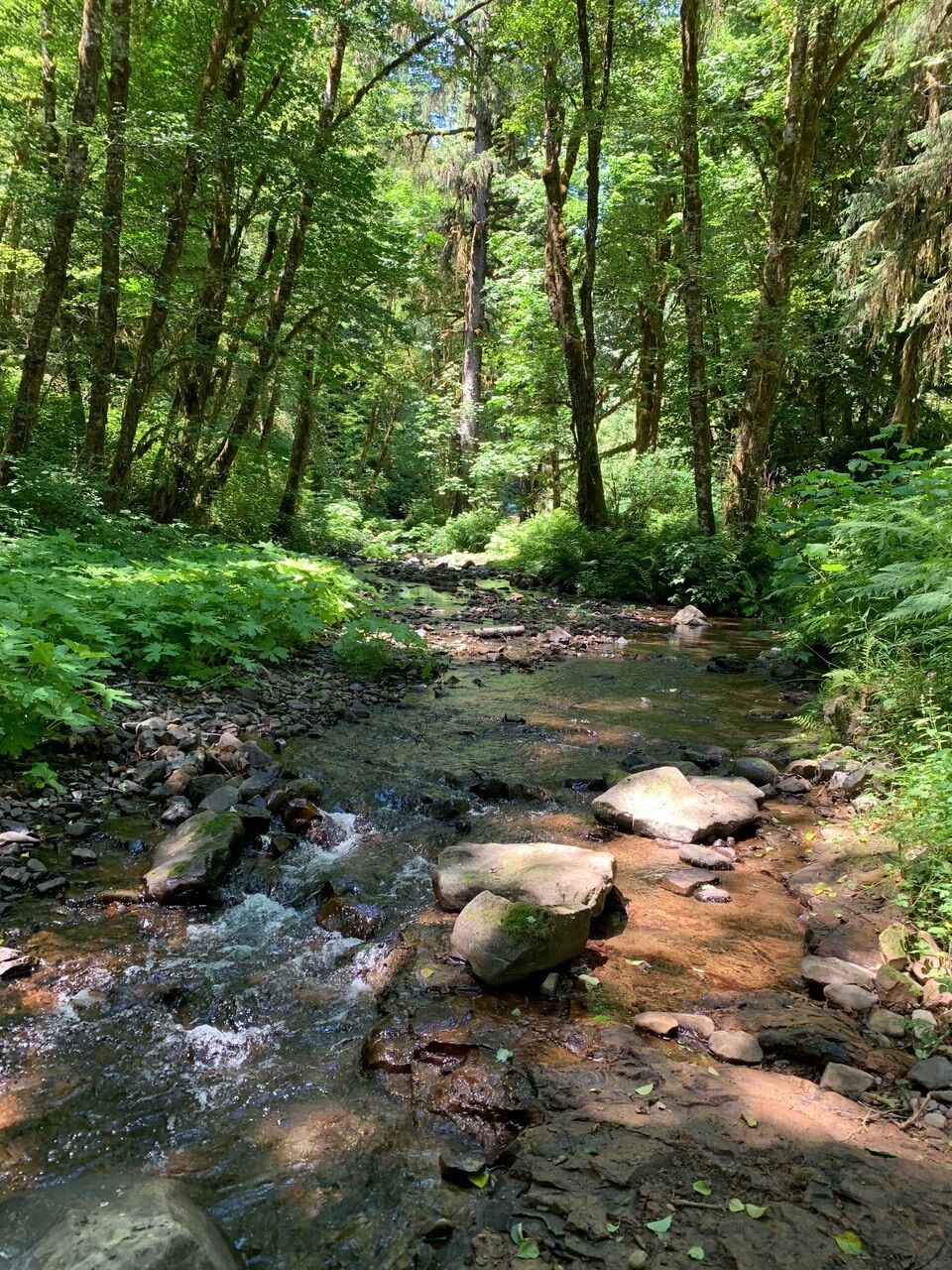 A small creek connects to the waterfall. 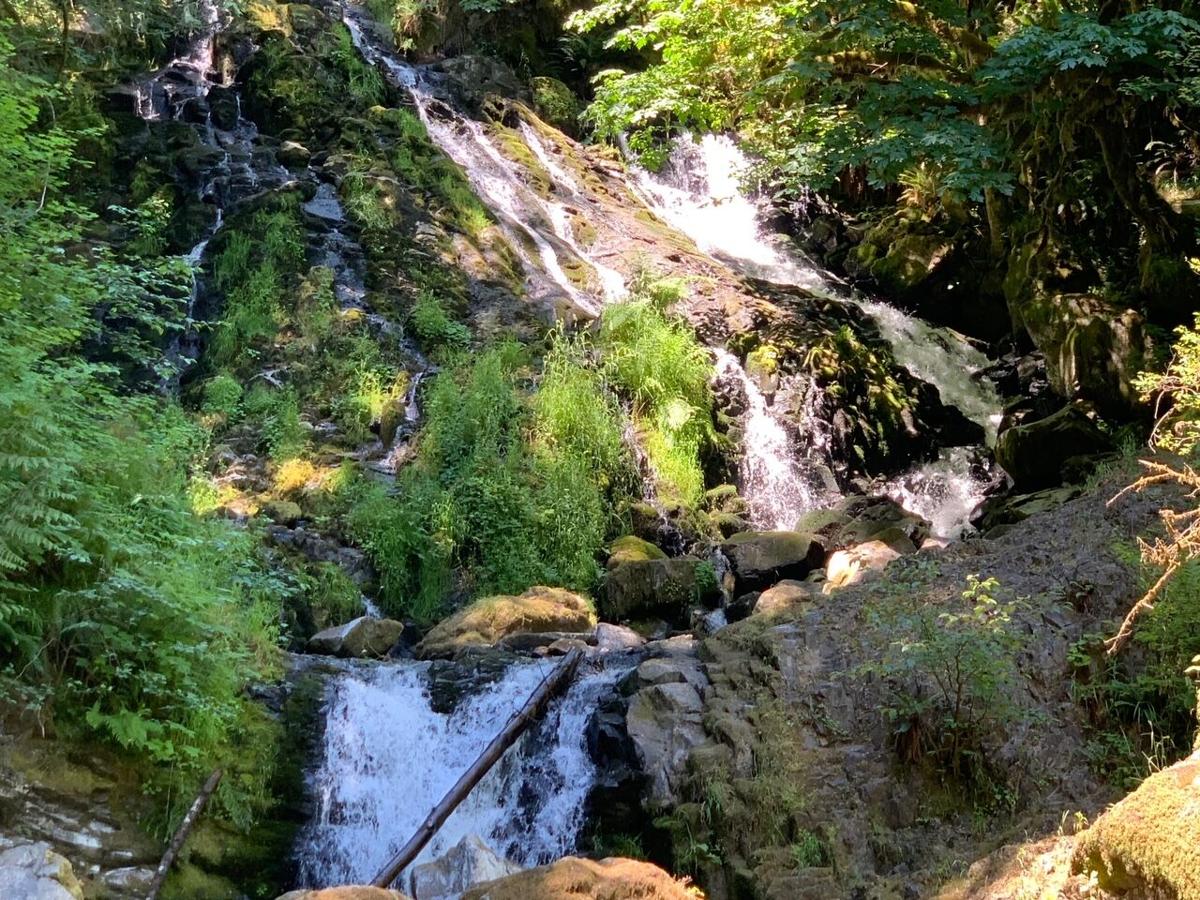 A view of Fishhawk Falls. 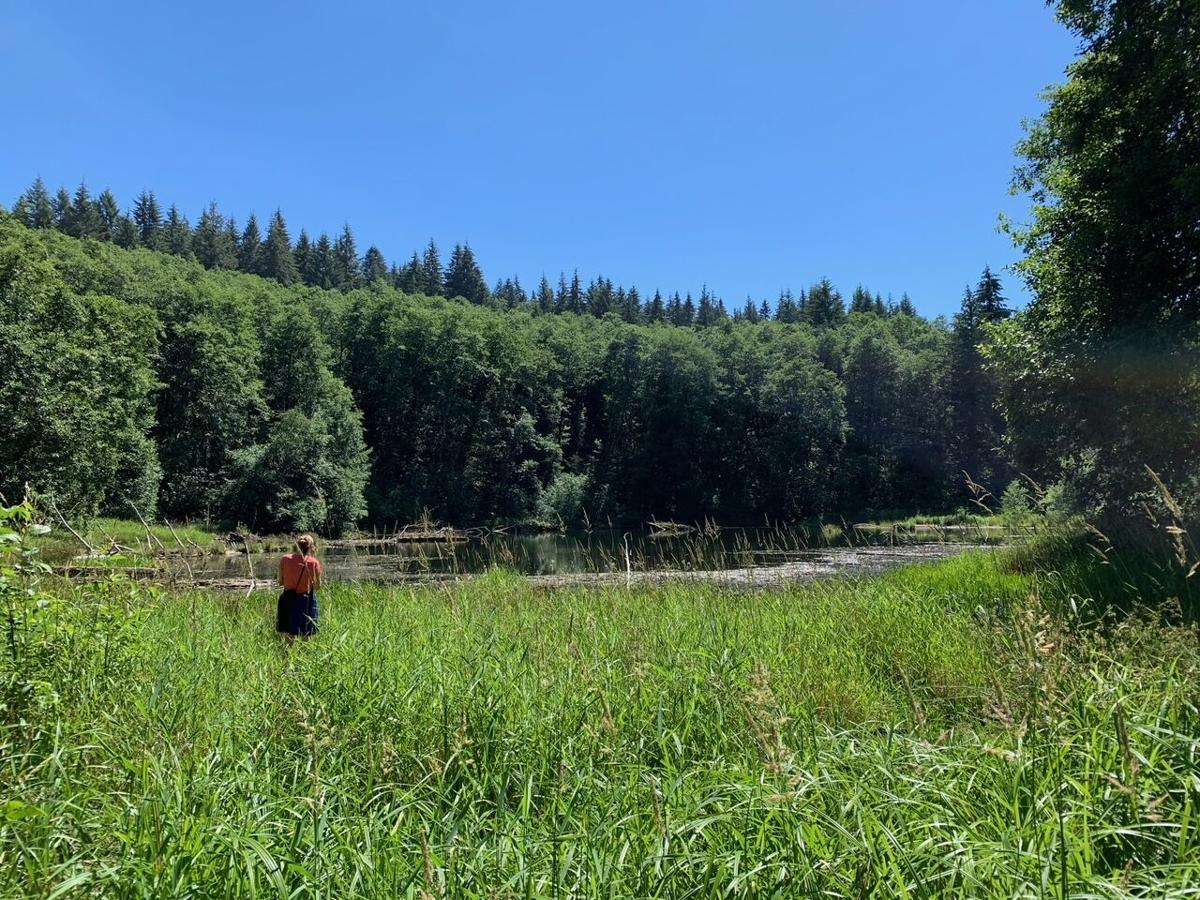 A view of the area surrounding the trail to Fishhawk Falls.

Patrick O'Connelly enjoys the peacefulness of the Bloom Lake Trail.

Foxgloves brighten up the trail.

Nature is abundant along the trail to Fishhawk Falls.

A small creek connects to the waterfall.

A view of Fishhawk Falls.

A view of the area surrounding the trail to Fishhawk Falls.

A short trail off U.S. Highway 26 offers a peaceful spot to walk among nature.

Bloom Lake Trailhead is directly off of U.S. Highway 26, near milepost 24.5, on the south side just before the east end of the Quartz Creek Bridge in the Coast Range. There is parking and a trailhead sign.

As the trail starts, there is a bit of highway noise, which quickly fades while climbing the dirt and pine needle path up through shadows and sunlight in the tall hemlock, fir and alder forest. Flute-like calls of Swainson’s thrush, hooting of great horned owls and tapping of woodpeckers soon replace the sounds of traffic.

The trail is labeled as moderate, as there is a good uphill climb at the beginning toward the lake — but it levels off and dips down again slightly to the lake itself.

Along the forested trail are elderberry bushes heavy with clusters of red berries, salmonberry with its orange berries, tall hemlocks draped in moss, trillium, oxalis, and occasional foxglove and buttercups in the sun breaks. Ferns and huckleberry bushes grow out of the old-growth stumps left from early logging days, some with ax cuts in the sides.

When Patrick O’Connelly wanted an uncrowded trail, he chose Bloom Lake. Since many folks from Portland head to the Gorge for hikes, he said he wanted to go west to find something quieter. He was rewarded with a quiet, peaceful hike with few other hikers right off the highway.

“This is a lovely little hike, not so crowded,” Connelly said.

He mentioned he saw a garter snake across the trail, some banana slugs and several black dragonflies at the lake.

The lake itself is a bit of a misnomer. “Bloom Pond” may be more apt. It is a small lake with marsh grass and reeds at its edge. Several large dragonflies zigzag above it. Smaller iridescent blue darners illuminate yellow buttercups nearby.

A couple with two large dogs were also enjoying the trail to the lake. It is an easy day trip from the coast or a convenient stopping point if traveling over the Coast Range.

As one descends, the traffic noise slowly returns.

After hiking Bloom Lake Trail, consider continuing west on Highway 26 past Baker’s General Store and Elderberry Inn and Restaurant — both make for nice stopping points. Then take state Highway 202 toward Jewell, just before the next bridge to a lovely rest stop and short hike. This windy road travels past farms, some with horses, cattle or golden hay, and climbs into the forest. Lee Wooden and Fishhawk Falls Park is 5 miles from Jewell, right off of Highway 202, past the elk viewing area near milepost 25.

Its parking area accommodates RVs, and has a park sign and small fence. In the adjacent meadow is one of two picnic tables, another is in the shady woods along the trail. It’s a convenient, nice spot to stop, picnic and walk.

The trail follows Fishhawk Creek in a forest of ferns and Sitka spruce, shaggy with moss. The creek itself is lovely and the 72-foot tall falls are a nice reward at the end of the short trail. White water cascades down tall basalt in first a wide fall, then narrows to a creek. The falls are clearly seen from the end of the flat trail.

In the creek itself, you may see a dipper, also called the water ouzel. This gray robin-sized bird “walks” on water. It balances on the rocks right in the river and flies quickly from spot to spot.

Peter Petrov and his family stopped by with their camper trailer for a break from their drive on Highway 202. He said he travels the route for work and often stops here for a rest or walk.

“I stop at all the parks. I’m not a city guy,” Petrov said. “I’ve been stopping here for years. It’s a nice little spot.”