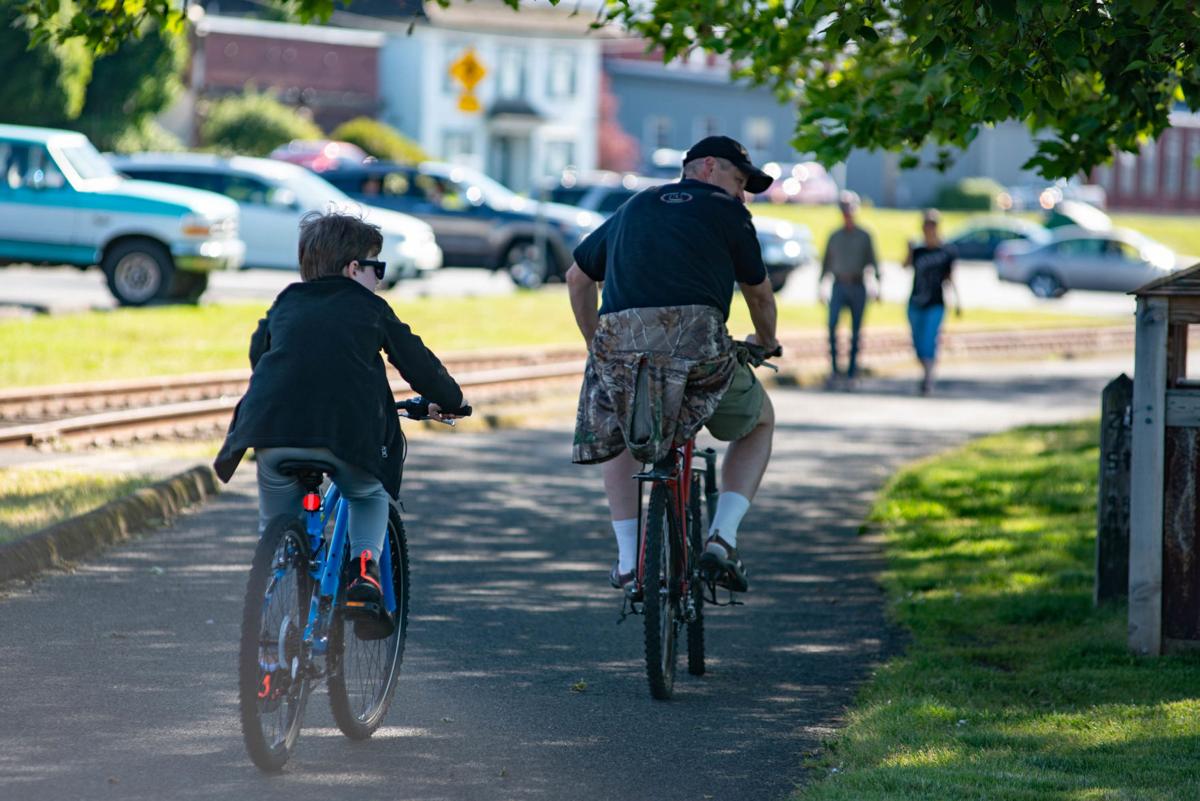 Cyclists on the Astoria Riverwalk. 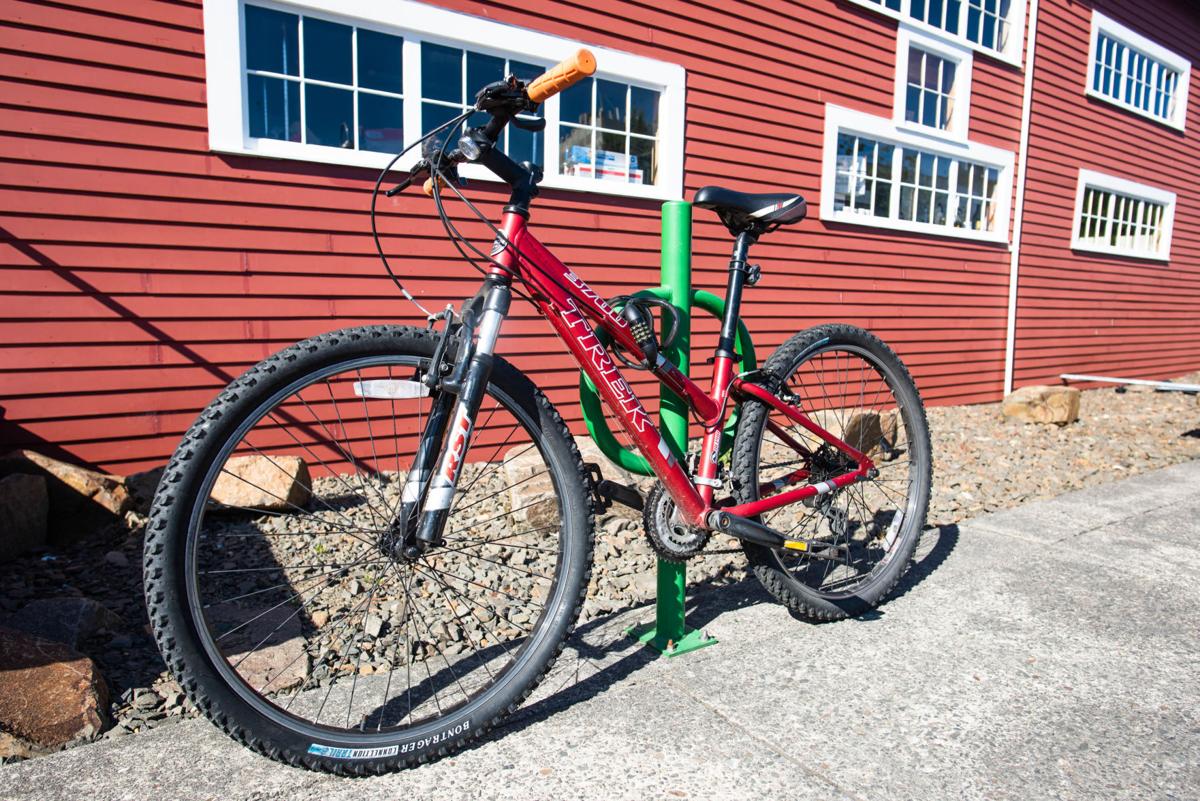 A locked bike near Frite & Scoop. 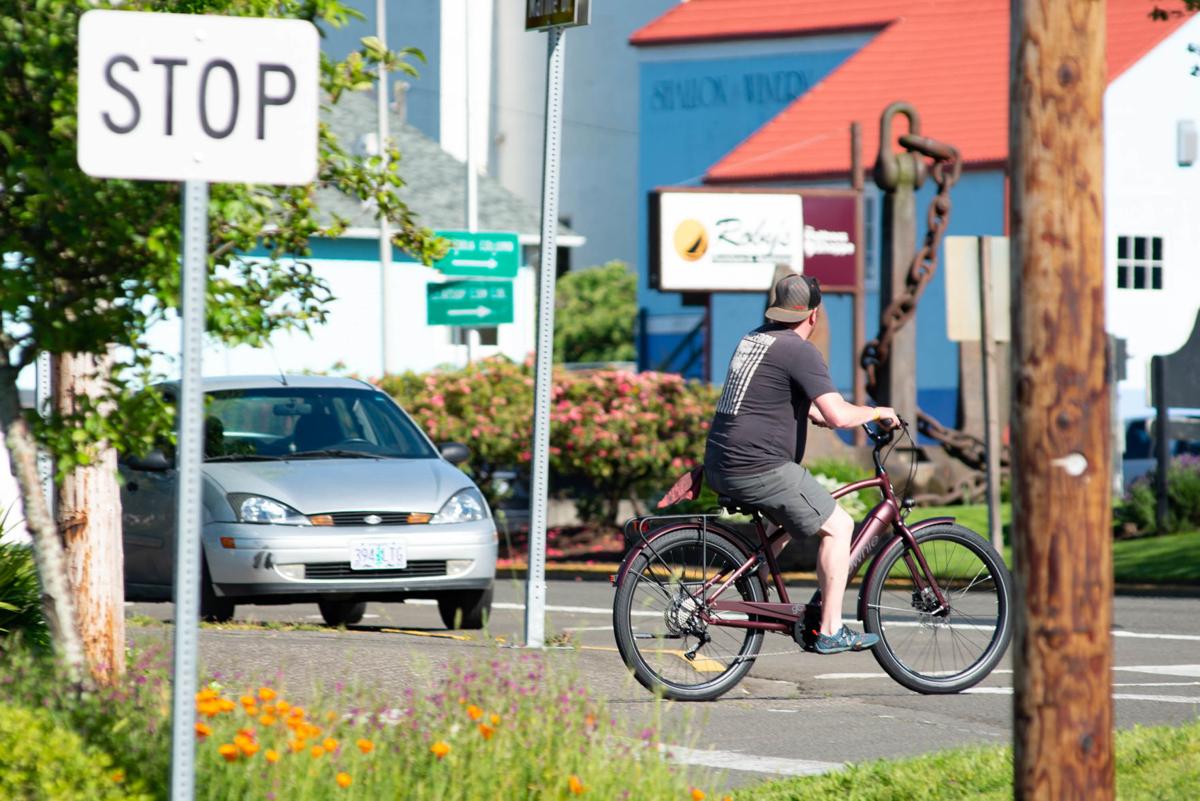 A cyclist in downtown Astoria. 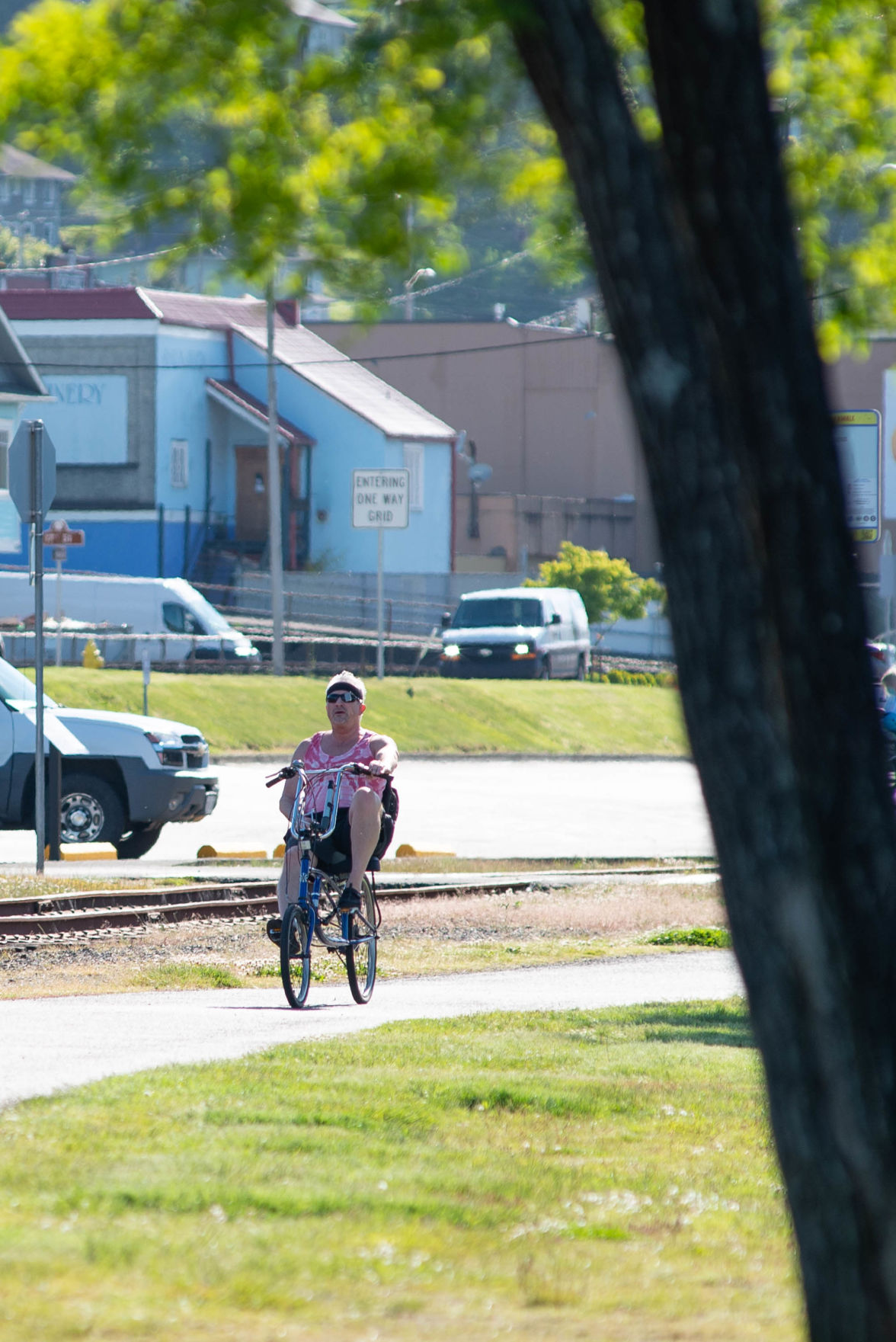 A cyclist on the Astoria Riverwalk. 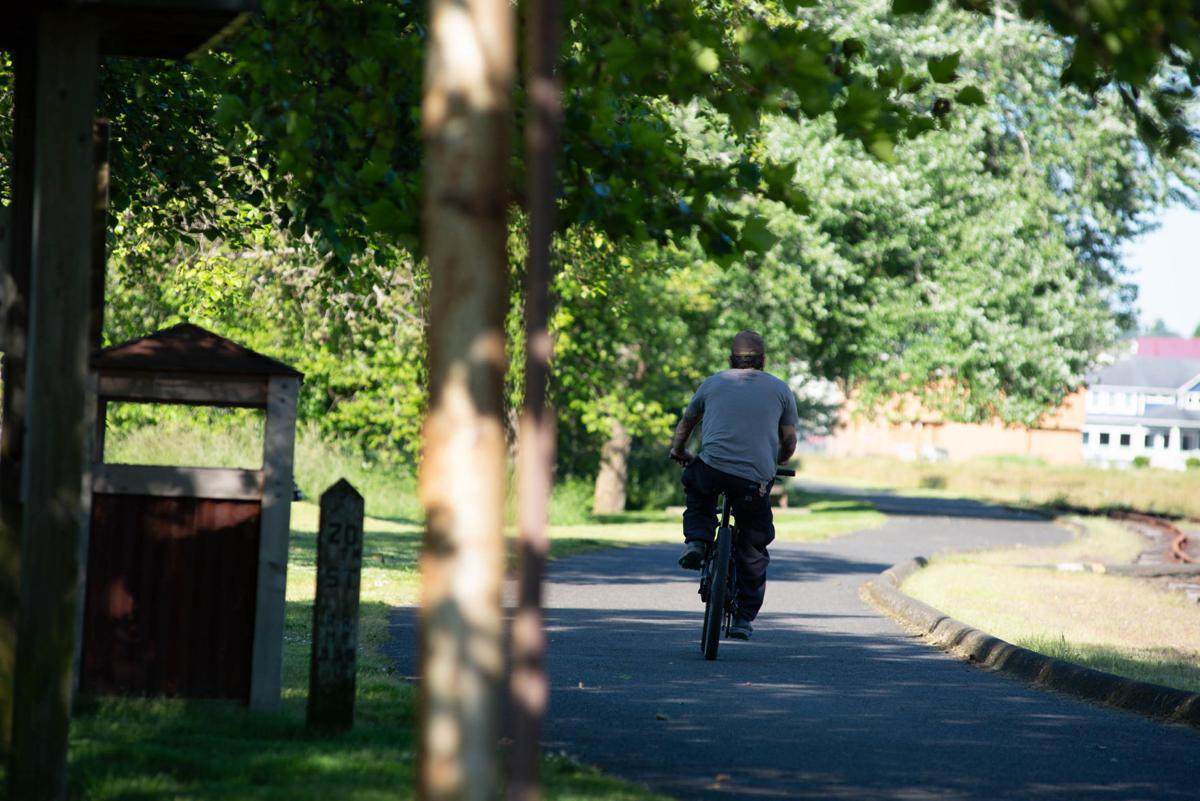 A cyclist heads east on the Astoria Riverwalk.

Cyclists on the Astoria Riverwalk.

A locked bike near Frite & Scoop.

A cyclist in downtown Astoria.

A cyclist on the Astoria Riverwalk.

A cyclist heads east on the Astoria Riverwalk.

With less options than usual to stay active because of the coronavirus, many residents have turned to bike riding to exercise.

While the activity is usually popular along the North Coast, bike shops have seen an influx in interest in the last few months.

“One of the downsides of the current situation is that while biking is very popular — we had one of the best Aprils ever — the bike industry is in a position where we’re two or three months behind getting our new bikes,” said Scott Lee, owner of Bikes and Beyond in Astoria.

Two major factors contributing to the change is the coronavirus pandemic, which has led to more interest in bike riding, and trade issues between the U.S. and China, which have led to the delay in shops getting bikes.

“It’s put everything upside down for the industry,” Lee said. “We’ve been real busy but basically all of the major bike shops are out of new bikes. Now is not the best time to buy a bike but we expect things to get back to normal by July 4.”

Nonetheless, many local bike shops still have a variety of bikes to rent, and can still help both new and experienced riders.

“If it’s been a while since you’ve been on a bike or if you’ve never really been on a bike much or if you want to add something to your experience, it’s important you come by a bike shop,” Lee said. “We’re all happy to show you the different types of bikes available, help you get started and get you some recommendations.”

Jerrick Romero is owner of Beachin’ Bike Rentals and Fun Beach in Long Beach, Washington. He and Lee suggest beginning cyclists start out with electric bikes.

“Electric bikes have a pedal assist and throttle, which caters to people who maybe don’t bike regularly but want to get somewhere further and quicker in a shorter time,” Romero said. “Even if you are a cyclist and want to test an electric bike, you’re still able to try it. They cater to how you want to ride.”

One of the perks of electric bikes is that they can be altered to create a more or less intense workout, Romero and Lee said.

“If you can ride a bike, you can ride an electric bike,” Lee said. “One of the nice things about them is if you’re riding with a partner, the electric bike can help you two even out so you’re both on the same level. They bring riders of different energies together.”

Fat bikes, which have thicker tires, are another option for riders who are interested in riding on the beach. Three-wheeler bikes are also a popular choice for beach riding.

“We all give an operational instruction before people go out,” said David Berkman, manager of Family Fun Cycles in Cannon Beach. “It’s really pretty simple. We want people to stay out of the salt water and to ride during low tide.”

The bikes are also popular for mountain biking.

One way to improve bike riding for more experienced riders is to purchase quality gear, like a new raincoat or pair of sunglasses. For the bike itself, improvements can include adding a mirror or a phone carrier.

For those who own cell phones, downloading a free bike riding app can help track distance traveled and calories burned.

“Apps are one of the biggest cycling developments in the last 10 years,” Lee said. “They’re also a neat community builder where you can compete with other cyclers.”

Where to go for a ride

The Long Beach Peninsula and North Coast have a variety of places for people to ride bikes. On the peninsula, one of the most popular trails is the Lewis and Clark Discovery Trail, which links between North Head Lighthouse in Cape Disappointment State Park, to north of Long Beach. The trail is scheduled to be expanded to go north in the next few years.

The park has other trails, both paved and not.

“There’s trails that break off on the way to the lighthouse. Some are paved but there are a lot of others you can get to that are more catered to mountain bikers,” Romero said.

Close to Cape Disappointment are trails around Black Lake and the Port of Ilwaco.

“Similar to Cape Disappointment, around Black Lake there are other paths you can take that are more woodsy and intense,” Romero said.

For riders on the North Coast, Fort Stevens in Warrenton and the Astoria Riverwalk are two popular choices.

“Warrenton has a fabulous bike path system. Fort Steven has over 15 miles of paved bike paths to ride on. It’s beautiful. They’re flat and you can spend a whole day riding there,” Lee said. “There’s also a path that goes through downtown from where the service memorial is, almost to Fort Stevens.”

Another option for riders is to try trails in the Clatsop State Forest or near the Greenwood Resources property in Seaside.

“They’re both open to non-motorized vehicles and certain kinds of electric bikes,” Lee said. “It’s a good way to get out and explore wildlife.”

Lee encourages riders to call the timber companies to find out what their rules are before heading out.

A lesser-known option is to drive to the Wahkiakum County Ferry terminal, park your car, then take your bike on the ferry.

“It’s one of my favorite rides to go on. It’s really fun,” Lee said. “You’re the first one on and off the ferry, then you go over to Puget Island, which has wonderful rural rides. You can ride around Cathlamet, get lunch, then take the ferry back to your car.”

For more experienced riders, Lee suggests looping from Astoria to the Youngs River Falls, which takes about 20 miles and includes some uphill riding.

Another challenge for experienced riders is to try riding along some of the North Coast’s logging roads.

“It’s a fun way to travel back roads around here. Anyone who knows the county knows we have more logging roads than anything else,” Lee said. “We’re really wealthy in our opportunities for that kind of riding.”

Possibly the most challenging local ride is to take what’s called a “half-century,” a 50-mile bike ride. Bikes and Beyond founder Richard Fencsak, who also founded the Great Columbia Crossing, was known for enjoying a half-century that includes Oregon and Washington state.

“You start here in Astoria, go over the Astoria Bridge to Washington, ride along Parpala Road in Naselle, then along U.S. Route 101, then loop down to the turn-off just before Seaview, then loop through Chinook and go back over the bridge,” Lee said. “It’s a really exhilarating experience … For an experienced rider, there is no greater adventure than tackling the Astoria Bridge.”

Other challenging routes include riding along the Lewis and Clark Road to Seaside, taking Highway 202 past the fairgrounds to Walluski Loop and back, or continuing to Jewell for a longer ride.