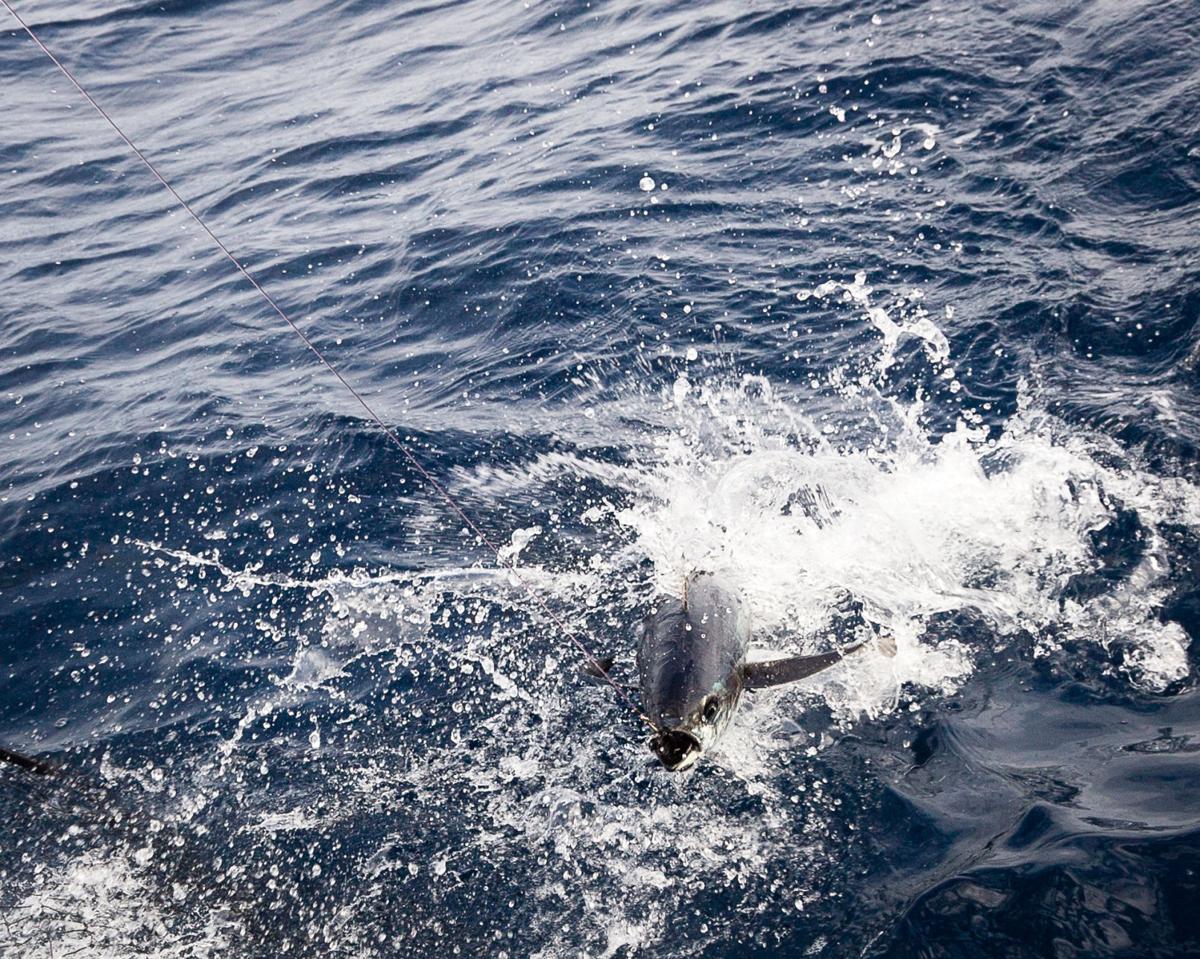 With burst exceeding 40 miles per hour, albacore put up a lively fight on light gear. Whether you're trolling for salmon or still fishing for sturgeon, spectacular scenery abounds on the Columbia.

A deckhand prepares fishing rods as a charter boat leaves the Port of Ilwaco.

Fishing pressure typically peaks in early and late summer on the Columbia River during the sturgeon and salmon seasons.

Comanche skipper/owner Tom Prozialeck pointed a customer to a cannery as crew members congratulated customers after a successful charter fishing trip in June 2018 at the Port of Ilwaco. 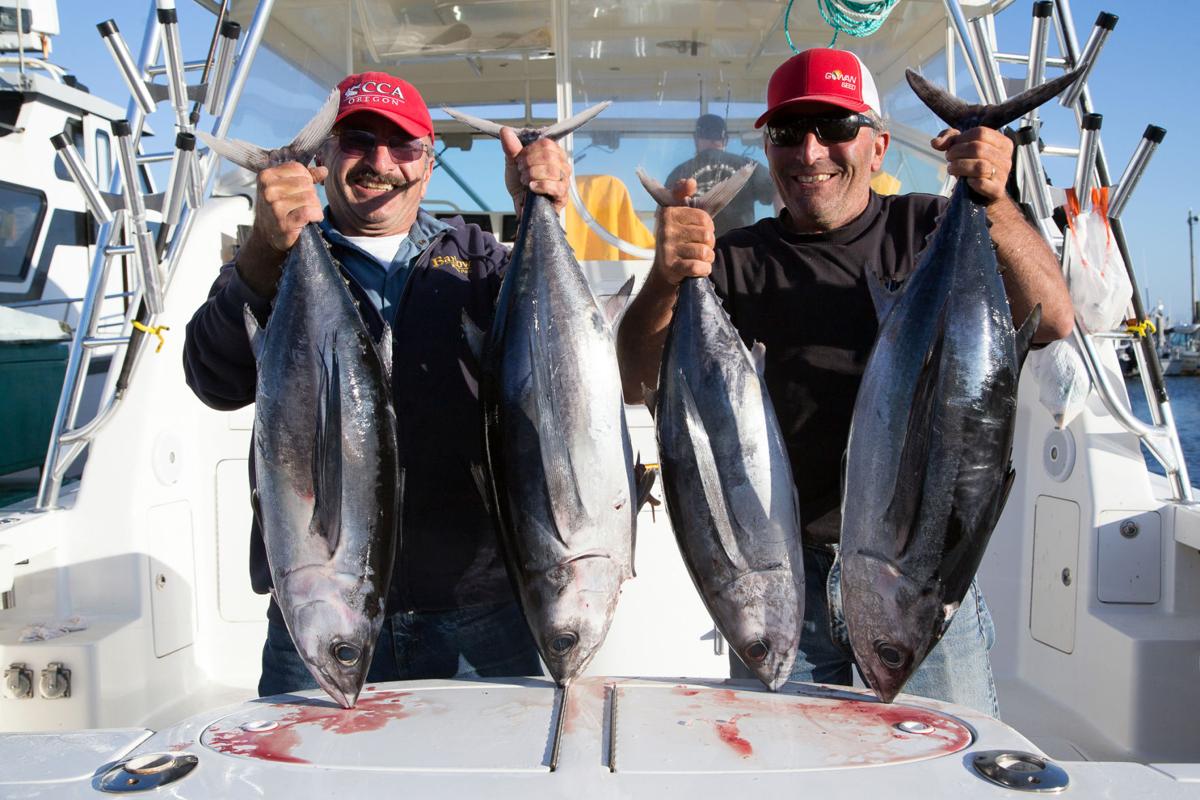 Albacore tuna is a popular summer fishery off the Washington and Oregon coast. Customers often have the tuna smoked and canned, or cut into loins for the grill.

With burst exceeding 40 miles per hour, albacore put up a lively fight on light gear.

Whether you're trolling for salmon or still fishing for sturgeon, spectacular scenery abounds on the Columbia.

A deckhand prepares fishing rods as a charter boat leaves the Port of Ilwaco.

Fishing pressure typically peaks in early and late summer on the Columbia River during the sturgeon and salmon seasons.

Comanche skipper/owner Tom Prozialeck pointed a customer to a cannery as crew members congratulated customers after a successful charter fishing trip in June 2018 at the Port of Ilwaco.

Albacore tuna is a popular summer fishery off the Washington and Oregon coast. Customers often have the tuna smoked and canned, or cut into loins for the grill.

Whether it’s the suspense of hooking a colossal halibut, the sound of a screaming drag from a deep-diving tuna, the awe-inspiring acrobatics of an airborne sturgeon or the thrill of catching your own Dungeness crab, unforgettable river and ocean charter fishing opportunities abound nearly year-round in Clatsop and Pacific counties.

Pacific rockfish are the most commonly targeted species during spring charter fishing trips.

Black rockfish, one of more than a dozen varieties inhabiting the waters off the Oregon and Washington coasts, are the most routinely caught, often two at a time using a top and bottom rig. The Washington state record black rockfish (10.72 pounds) was caught in Ilwaco in 2016, and charter customers routinely return with a limit of the mild-flavored fish.

Lingcod are also a popular species targeted by bottom fishing trips throughout the spring and summer. The toothy, crevice-dwelling fish are coveted among chefs and have a flavor compared to lobster. Lingcod are commonly caught on plastic worms and metal jigs, typically in the 2-to-3-foot range.

Hefty Pacific halibut typically begin to land on port scales in late spring each season, after annual quotas are announced. The powerful flatfish can weigh several hundred pounds and measure more than 8 feet long. Most recreationally-caught fish weigh in the 30-to-40 pound range. Keeping the bait down is essential for catching these bottom dwellers, sometimes requiring more than 2 pounds of weight. Once hooked they can feel like pulling up an anvil, often requiring some muscle to hoist the biggest fish from the bottom. Some charters are equipped with electric reels to lessen the burden.

In late spring, attention turns to a true river monster that lurks in the Lower Columbia’s depths. White sturgeon — capable of reaching more than 12 feet long — inhabit the cold waters around Astoria and Ilwaco. The start of the season initiates a late-spring pilgrimage of fishermen to the river eager for an opportunity to reel in a prehistoric fish. After a couple of consecutive closed seasons due to conservation, a keeper sturgeon season returned to the Lower Columbia in 2017, allowing fishermen to retain two fish annually in the 44-to-50-inch range. A firm fillet without a “fishy” flavor, sturgeon is among the most popular to be smoked and canned. The fish has a light bite, but is renowned for putting up a spectacular fight, often going airborne during repeated runs.

Chinook and Coho salmon take center stage during the summer months as the annual run culminates around the mouth of the Columbia, made famous for the Buoy 10 fishery. The size of the annual runs varies year to year with annual quotas set accordingly. However, the fishery is legendary among anglers, regardless of predicted runs.

Tackle Time Bait and Charters owner Gene Kane believes the Columbia River fishery is among the best anywhere, preferring it to prominent salmon rivers in Alaska.

“There’s nowhere like it anywhere,” Kane said. “They have nothing compared to here because it’s so long.”

The central location of the Columbia River makes it an ideal staging ground for salmon all over the West Coast.

“Most of the Puget Sound, Sacramento and Rogue River fish come by here, everything up and down the Northwest coast,” Kane said. “That’s the difference between here and any other port on the West Coast.”

Unique underwater geography like the Astoria Canyon, roughly 10 miles from the mouth of the Columbia, upwells nutrients near the mouth of the river, playing a crucial role in providing a food source attracting and keeping the fish around longer.

“The fish stop here and bulk up before continuing their run,” Kane said.

Offshore fishing also heats up in summertime as schools of migrating albacore tuna — once the backbone of the former Bumble Bee canneries in Astoria — are chased by recreational charter boats. The schools of tuna follow fingers of warm water as they make an annual migration from the eastern Pacific, often coming within 40 miles of the coast, a relatively short reach for recreational boats. The action in albacore can be fast and furious, particularly when a school of fish is found.

“It’s the only fish I know where six guys can be hooked up at the same time,” said Shake N Bake charter captain Mike Colbach, who considers albacore among the hardest-fighting fish anywhere.

“Pound for pound, nothing fights as much as albacore — maybe yellowtail,” he said.

The success of the fishery over the years has made albacore trips increasingly popular.

As the foliage begins to drop, so do the crab pots. While other fisheries begin to reel in for the season, recreational crabbing is only beginning. Trips typically begin in September and continue until December, the usual start of the commercial season.

Some use chicken, others swear by salmon, and many believe chopped razor clams make the best bait. No matter which you choose, the crabs are always biting and you don’t have to worry about getting your hands dirty on a recreational charter, unless you want to.

Learning how to identify, measure and properly hold a crab is part of the experience. From baiting to dropping pots, the biggest hassles of crabbing are handled by skilled deckhands. But the best part — coming home with fresh-caught Dungeness crab — is all left to the customer.

People prone to seasickness or seeking a calmer experience on the water should consider a crab charter, Smith said. Combination fishing and crabbing trips are available on some charters depending on the season.