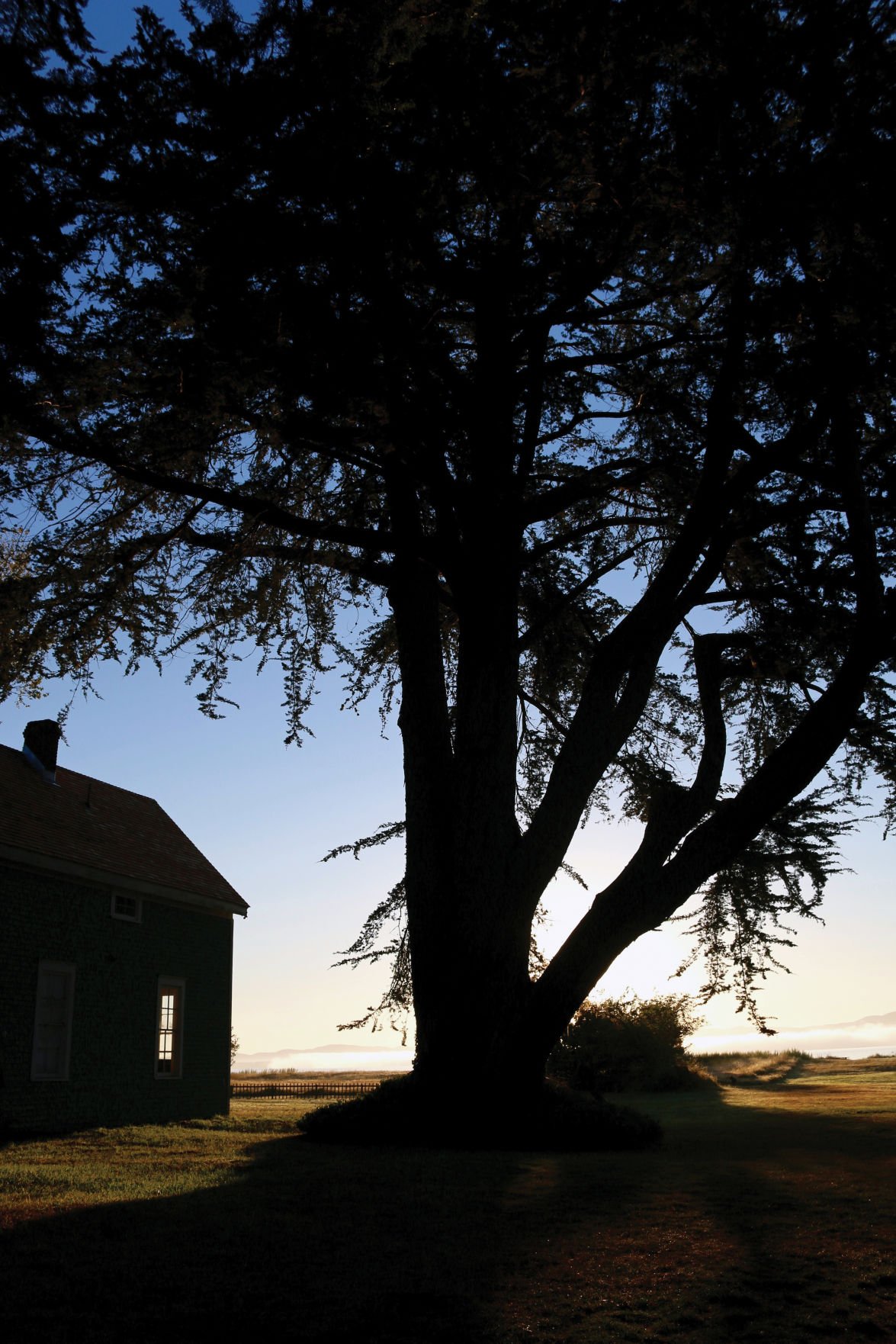 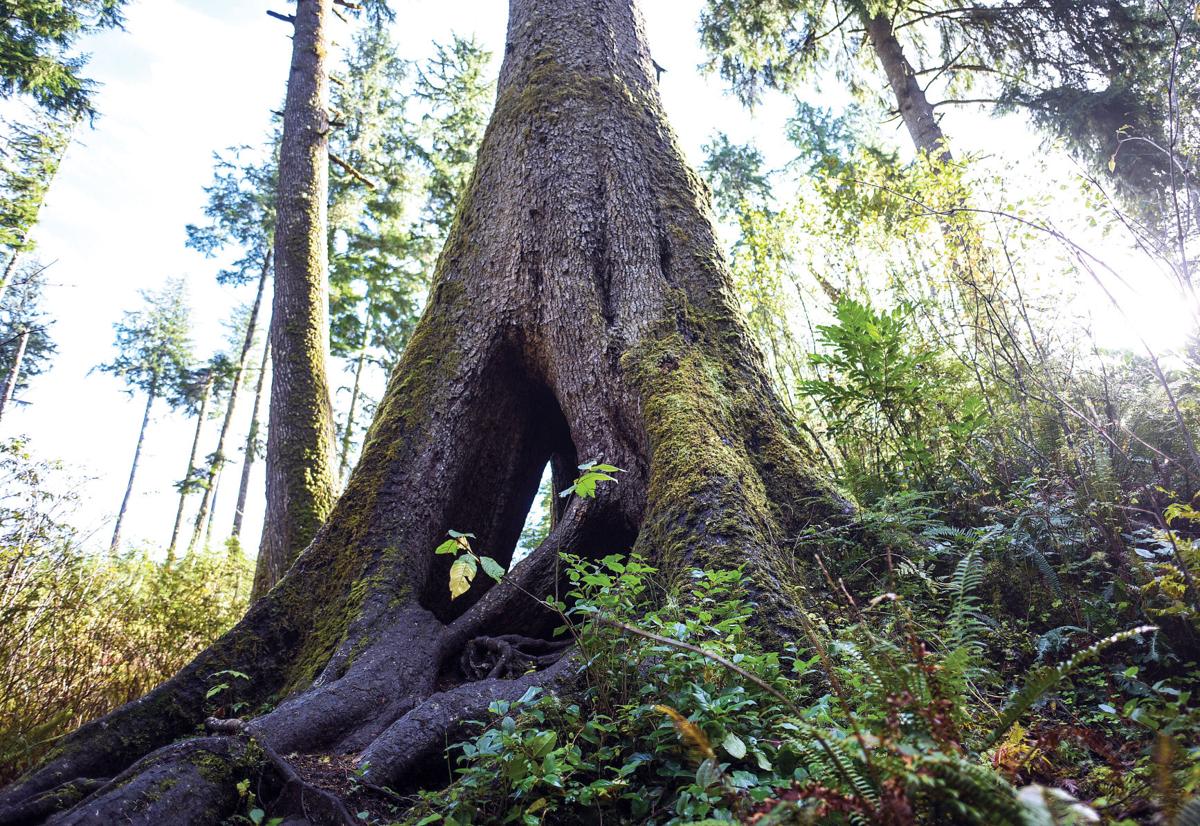 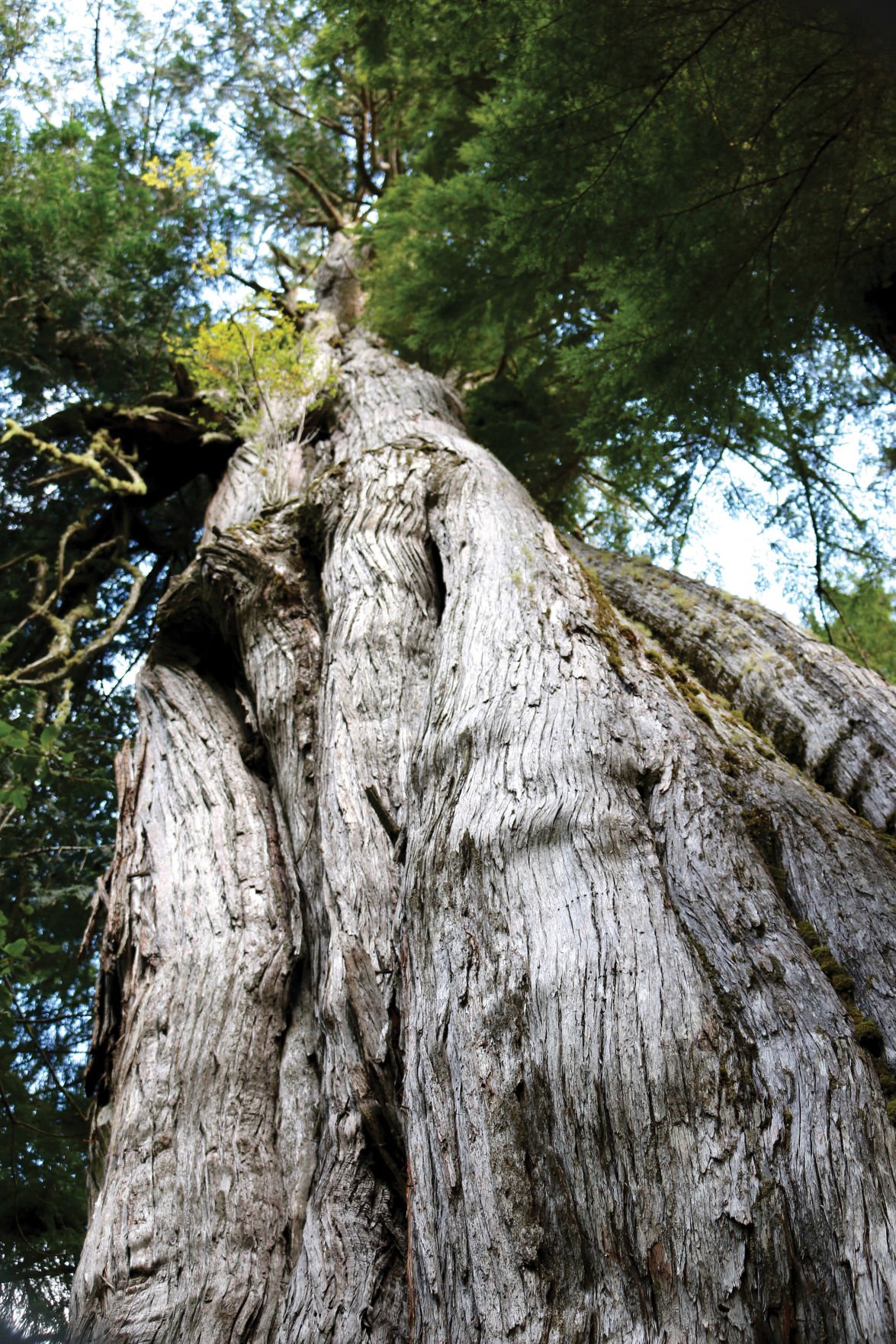 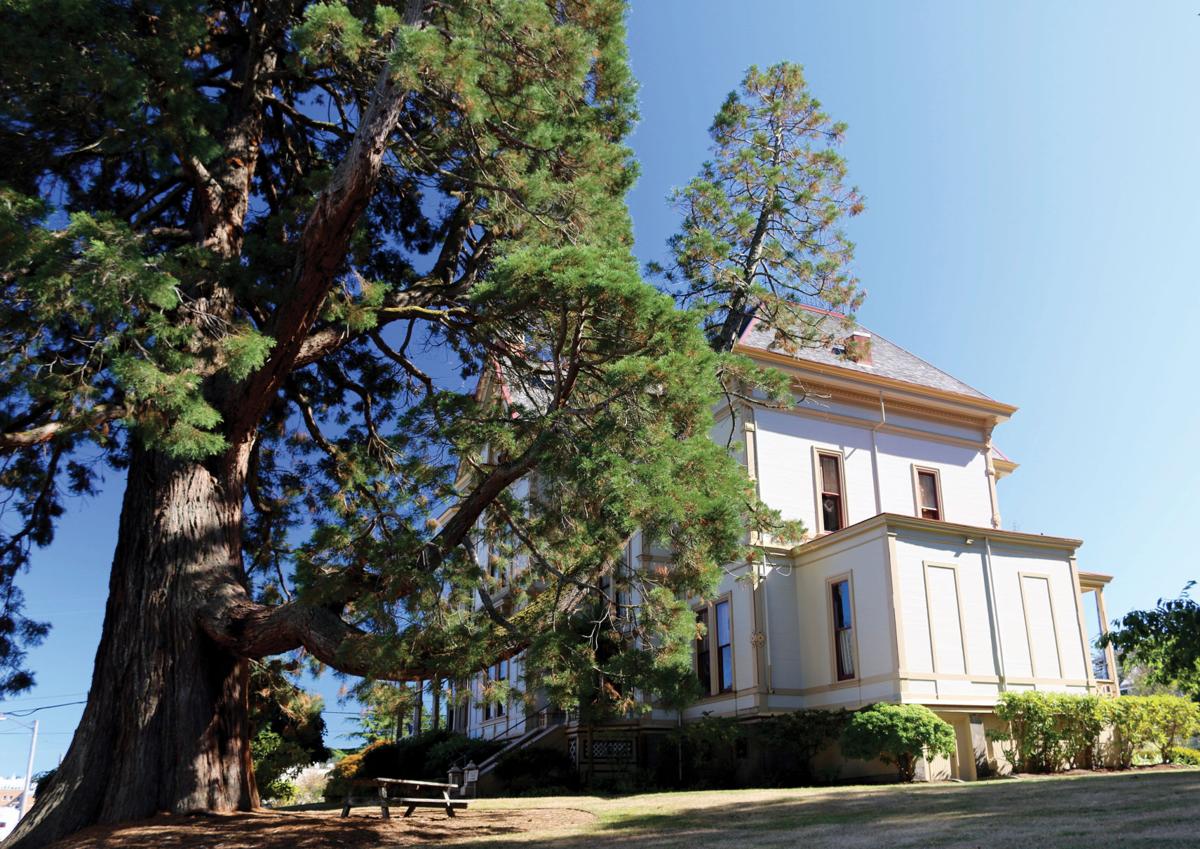 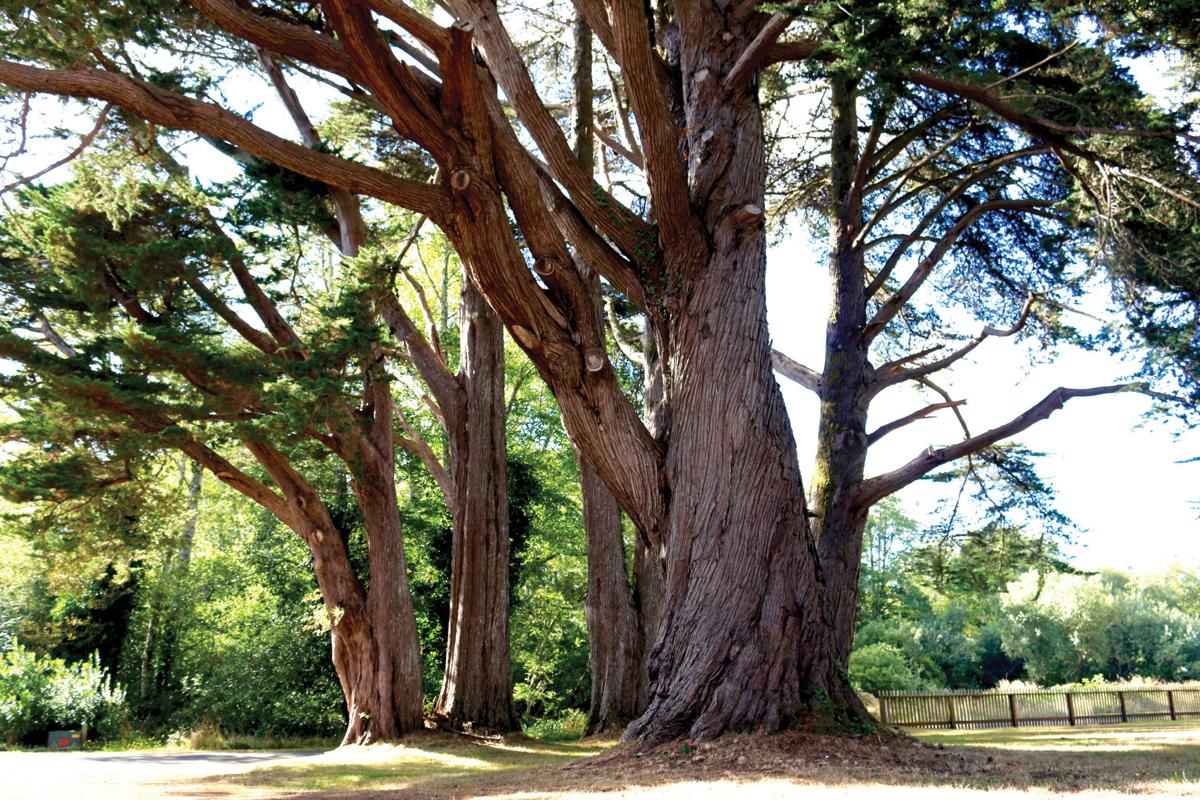 There’s a feeling that comes of hanging out with old trees — something innate in each of us that awakens in the presence of such enormous, peaceful beauty. That they have stood for so long and witnessed so much is awe inspiring to be sure but also somehow softly comforting. Big trees always feel ancestral.

Whether you’re simply driving by, out for an easy stroll, or dedicated to putting in a little effort, this collection of favorites is sure to transform — leaving you suddenly, quietly, changed for the better.

Partway down Territory Road in the historic village of Oysterville, a stand of immense Monterey cypress lines the east side of the street. Planted by a local resident near the turn of the 20th century, the grandiose trees are now more than 110 years old and have become stately icons in this bayside hamlet.

Indigenous to the central California coast, where high winds and the constant spray of salt take a heavy toll, most examples of this species are flat-topped and rather scraggly, their twisted limbs pushing back at the elements like broad, angled brooms. Here though, on the lee side of the Long Beach Peninsula, where the trees have been magnificently tended and pampered, they’ve shot up like sentinels — their arms outstretched and sheltering — the protective guardians of Oysterville.

A sea captain, Columbia River bar pilot and successful businessman, George Flavel was undeniably one of Astoria’s most influential citizens. His family’s Queen Anne-style mansion, now a historical museum, is a showcase of furnishings and decor that reflect world travel and sophisticated tastes; it’s no surprise that the same can be said for the garden.

Nine trees on the Flavel estate — all believed to have been planted between 1886 and 1895 — are now Oregon Heritage Trees, the most impressive of which is a Giant Sequoia. Entirely dwarfing the northwest corner of the property, this 125-year-old colossus, a native to the California Sierra Nevadas, looms near the top of Duane Street. A youngster among sequoias, which can live to be 3,000 years old and grow to 300 feet tall, this fine beauty, with its curving limbs and enormous trunk, currently stands about 100 feet tall — and shows no signs of stopping.

Native to the Andes mountains of South America, this evergreen tree, also known as the Chilean pine, belongs to one of the oldest species on Earth: Considered a living fossil, the tree species has survived for at least 60 million years. Though individual specimens can live for a millennia, none of our local examples are more than 112 years old.

How can we be sure? In 1905 the city of Portland hosted the Lewis and Clark Centennial Exposition, a celebration that included 21 participating nations, Chile among them. As gifts, the Chilean ambassadors offered seedlings of this curious tree, and it’s believed the ones we see today sprang from that generosity.

Dotting the coastline, in parks, home gardens, and even the side yards of businesses, these souvenir trees (and now, their descendants) are easy to spot: Their leaves, which look like scales, are thick and triangular, with very sharp edges and tips; their long, cylindrical limbs swing down, carrying branches that remind us of this tree’s other common name — the Monkey Tail.

The first tree to earn designation as an Oregon Heritage Tree, the “Seaside Spruce” as it’s called, was once the largest tree in Oregon. At 216 feet tall and 56 feet round, its presence eclipsed all else in the forest. For almost 800 years, it weathered every coastal gale and evaded every ax, but in 2007, a severe December storm brought about its downfall.

Today, the fallen titan’s stump, along with a portion of the trunk, remains at Klootchy Creek County Park — just 2.5 miles east of Seaside on U.S. Highway 26 — and is definitely worth a look. An easy walk from the parking area to the heritage site, the path circles the mighty remnant, still impressive, then makes a wider, level loop through the surrounding temperate rainforest.

This half-mile walk to Short Sand Beach in Oswald West State Park wanders through one of the most well-preserved coastal rainforest ecosystems in the Columbia-Pacific region. From the parking lot on U.S. Highway 101, following the gentle curves of Short Sand Creek, a wide gravel path meanders under a multilayered canopy of Western red cedars, Sitka spruce and Western hemlock.

At the halfway point, connect with the Old Growth Trail — an easy detour that will lengthen your time with the trees before rejoining the main trek, which ends at one of the prettiest beaches on the coast. Popular with just about everyone, prepare to share this well-trod path with surfboards, strollers and lots of friendly dogs.

Tucked in the forest above Teal Slough, on the east side of Willapa Bay, stand some of the oldest cedars left in the Pacific Northwest. Part of a remnant old-growth forest within the Willapa National Wildlife Refuge, the trees are accessed by a short (.57 mile-long) trail that picks up just 1.5 miles north of refuge headquarters on U.S. Highway 101.

Park near the gate (please don’t block it), and head up the old logging road for about 300 feet. This first section of the walk is moderately steep, but soon you’ll be directed to a spur road that levels off nicely. Arrow signs point the way to separate stands of trees. The enormity of these ancient cedars will take you very much by surprise. A handful of towering Sitka spruce hold court here as well, Don’t miss the tree at trail’s end, with a view of Willapa Bay.

If ever there was a tree that stood as an emblem for the spirit of a city, it’s the Cathedral Tree — a 300-year-old Sitka spruce that resides a third of the way up Coxcomb Hill, home to the Astoria Column. Withstanding every fire, squall and hurricane to come its way, the tree remains a paradigm of steadfastness. Even during the devastating storm of 2007, when the forest structure surrounding it succumbed to 100-mph winds, the Cathedral Tree stood its ground.

Give this trail at 28th Street and Irving Avenue a chance and you’ll be doing yourself a favor. Rising up from the urban environment at its feet, the forest has regained its vigor. Lush ferns, trillium, and skunk cabbage once again bedeck the ground, and an understory of alder, juvenile spruce, and hemlock is on the return. Center stage, the Cathedral Tree looks on, as if maternally, keeping a careful eye on the rebirth of her legacy.

Cape Disappointment State Park is a wealth of trails that all frolic back, forth, and over this stalwart headland at the south end of the Long Beach Peninsula. Though each one offers a prime sampling of the lushness of our coastal forests, the trees along this 1.5-mile loop are the best of the bunch.

Pick up the Coastal Forest Loop Trail near the parking area at the boat launch, and hike up through a mixed wood of alder, spruce, and elderberry. Large Sitkas, some of them 10 to 12 feet in diameter, appear at every switchback toward the middle of this trail, which gains in elevation only little by little, so it’s never very painful. Views of Baker Bay and a wide sweep of the Columbia dot this delightful route.

Accessible only by private boat, the Long Island unit of the Willapa National Wildlife Refuge is home to a grove of Western red cedar that has existed for almost 4,000 years. Though the individuals currently growing at this 274-acre site are about a 1,000 years old. Evidence of their ancestors, as well as their offspring, is all around.

Punctuating this 5-mile loop trail, which picks up at the south end of the island, a handful of ancients that twist and turn their way toward the sky, mingling with neighbors of spruce and hemlock. Near the middle of the island, where the official “grove” is located, the trail narrows, wrapping entirely around this special remnant of old growth.

While there are tall trees here in magnificent number, the real beauty lies in this forest’s ability to offer a unique vision of time — a place where past, present, and future all collide beneath a canopy of evergreen. Gargantuan stumps, leftovers from the early days of logging, let us imagine how this forest once looked, untouched, while saplings and thriving young adults offer the promise that one day, it will be that way again.