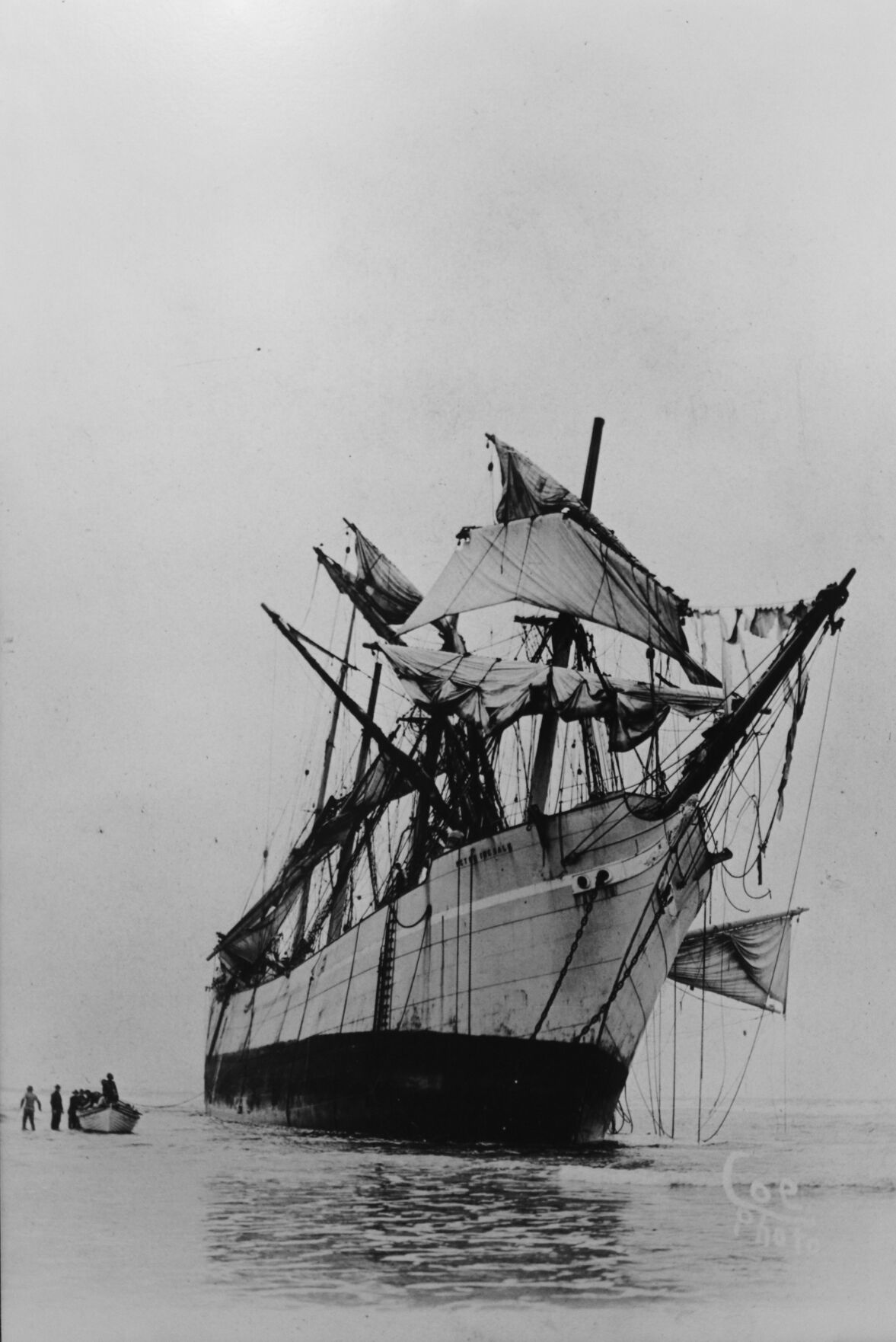 An upcoming museum exhibit will include information about local shipwrecks, like the Peter Iredale. 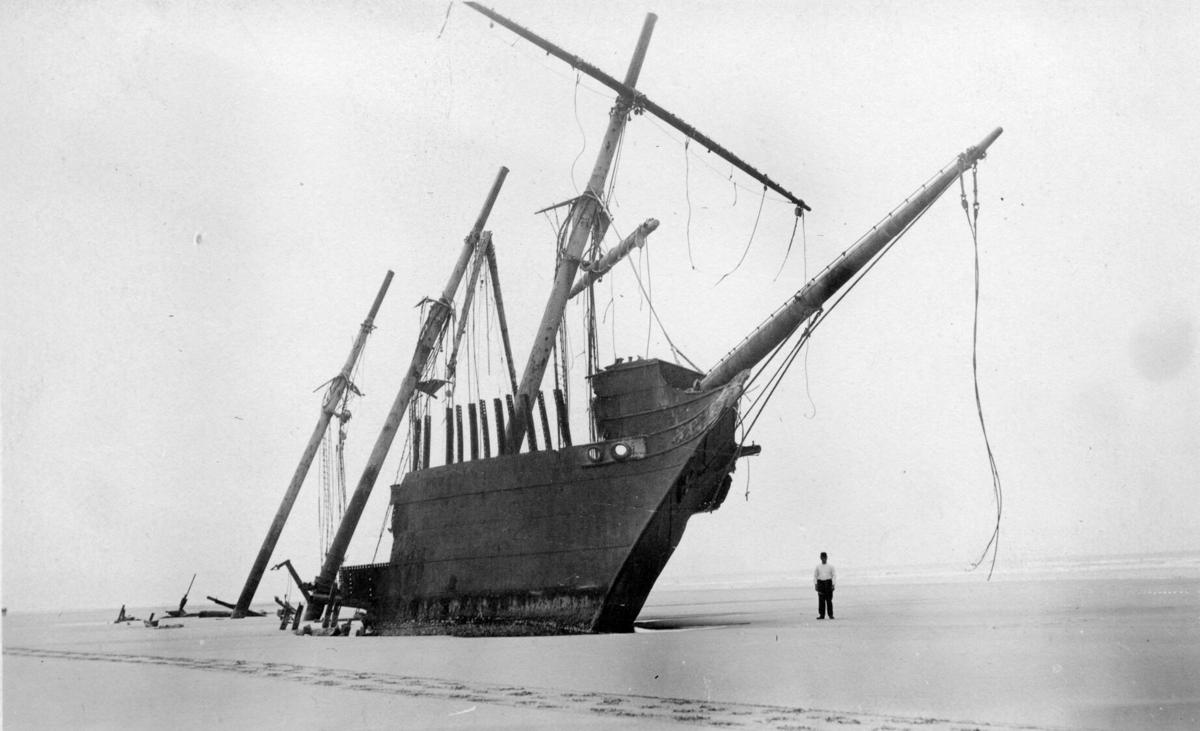 An historical photo of the Peter Iredale, which wrecked upon Clatsop Spit. 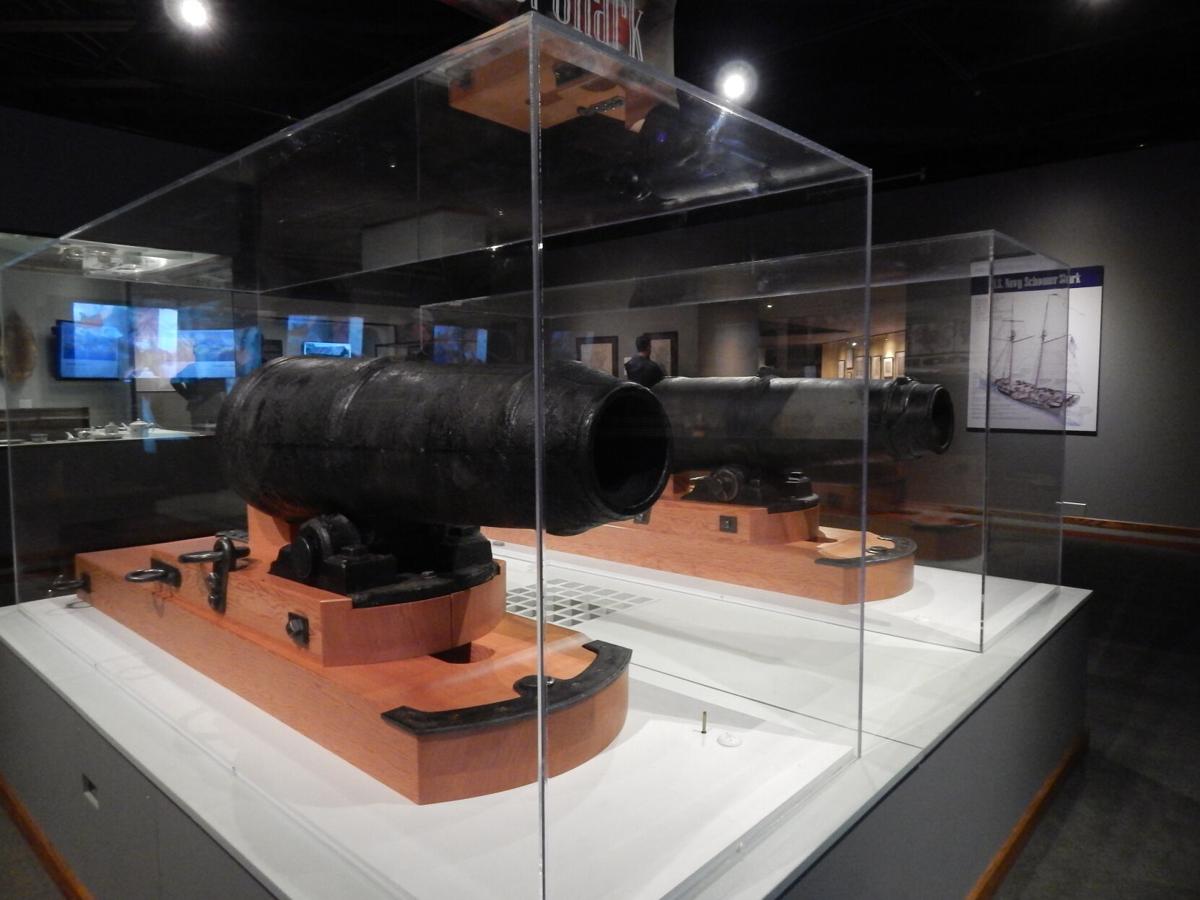 One of the museum’s current exhibits. 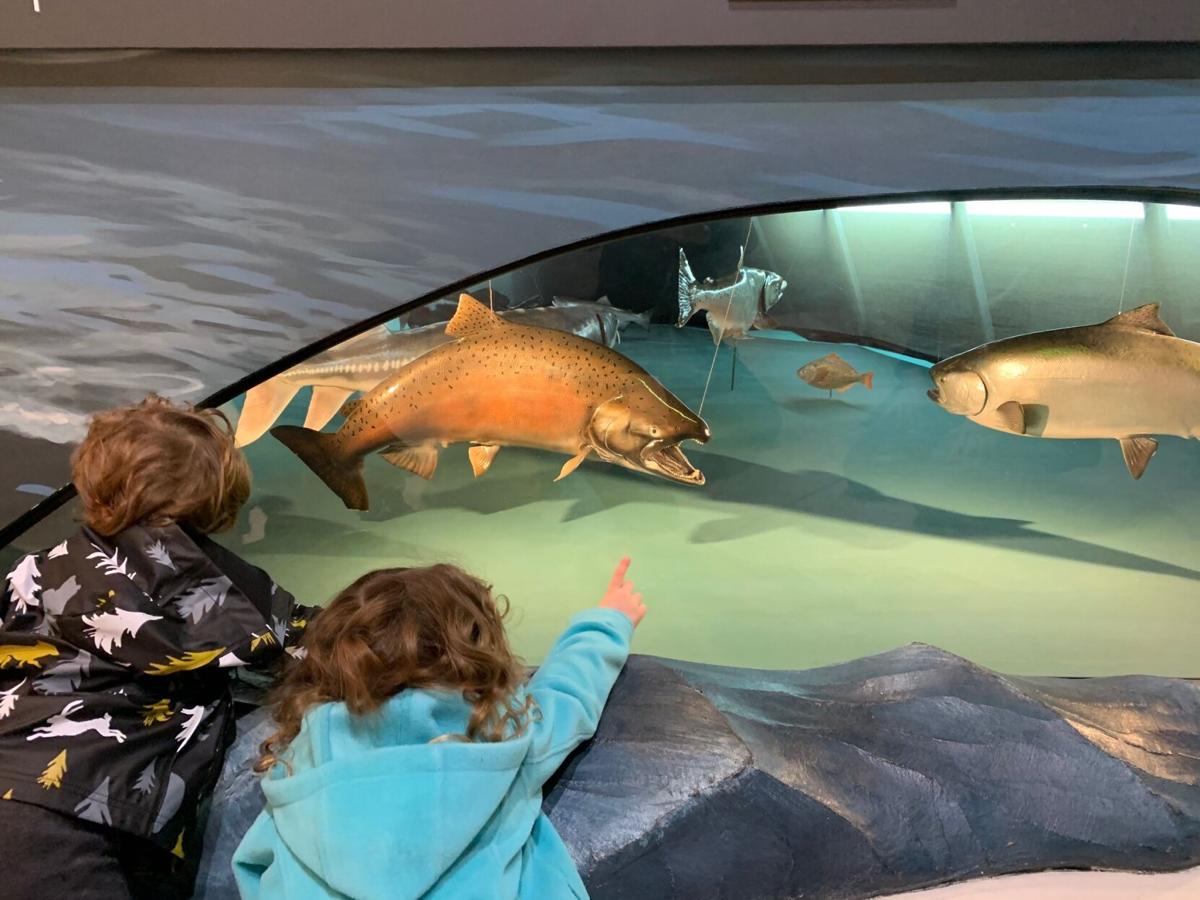 Kids look at one of the museum’s exhibits. 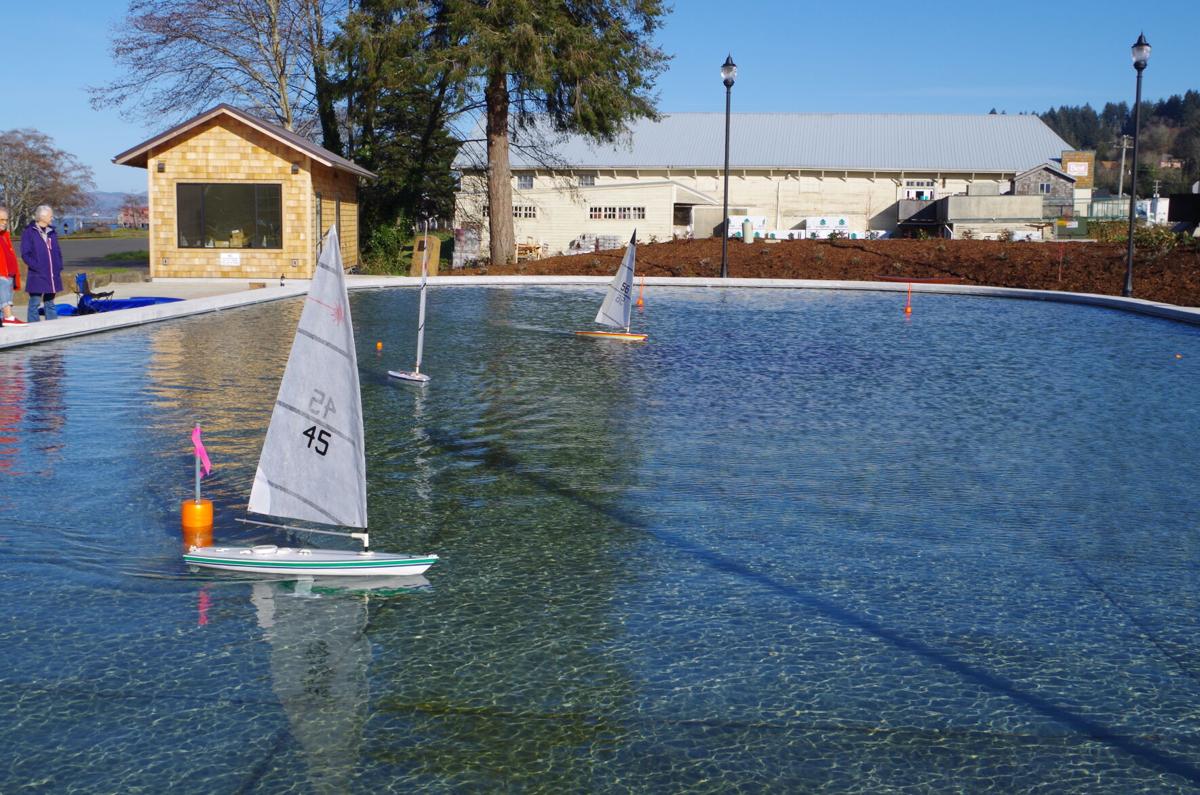 The pond at the Barbey Maritime Center.

The Columbia River Maritime Museum has announced its newest exhibits for summer: “Ocean Odyssey” and “Shipwrecks!”

The “Ocean Odyssey” documentary will take viewers on a deep dive into ocean waters, following a migration of humpback whales as they travel to their feeding grounds. The short feature film premiered at the museum on June 1.

“We’re careful to select films that aren’t playing in the shortened form within a 100-mile radius, so (attendees) can travel to Astoria from Portland or from other local cities with a great option for their families or by themselves,” said Blue Anderson, the museum’s store manager.

For the “Shipwrecks!” exhibit, museum patrons will get to learn local shipwreck history, how people explored those wrecks; and the development of technologies that helps humans better understand the context and impact of shipwrecks.

Curator Jeff Smith said the theme will be a permanent addition to the Columbia River Maritime Museum. However, the objects and stories in the exhibit will change over time, as the museum gains more information and develops its materials.

“It’s part of our maritime heritage here in the Pacific Northwest,” Smith said. “It’s critical to the story of the Graveyard of the Pacific, which is the mouth of the Columbia River.”

The Graveyard of the Pacific is the name given to the Columbia River Bar area, which some have deemed one of the most dangerous bar crossings in the world. More than 2,000 vessels and ships have sunk there over 200 years, according to the museum.

Gracing the museum’s big screen for the first time, “Ocean Odyssey” will be displayed in the 3D theater.

“The 3D effect gives the viewer a real, up-close look at the vast array of sea life that thrive in our local ocean waters, as well as around the world,” Anderson said.

Apart from taking viewers along a 2,000-mile migration, from the Great Barrier Reef to the feeding grounds in Antarctica, the documentary will also inform those in attendance about the health of oceans, how ocean currents affect the global climate, and the impact of pollution on oceanic ecosystems and wildlife.

Moreover, the film is narrated by Sylvia Earle, a marine biologist and National Geographic explorer-in-residence.

“Dr. Earle drives home the message of the importance of the ocean’s health to our entire planet and the damage we as humans are doing with our plastic wastes,” Anderson said. “She also, however, is just as quick to say that we can reverse the damage with easy-to-do actions.”

The seating in the 3D theater is at reduced capacity to ensure viewers are socially distanced but showtimes are frequent.

“Our theater is intimate, so we do adjust the availability depending on our county’s state mandated COVID restrictions,” Anderson said. “It is first come, first seated, but the film runs at the top of every hour.”

The forthcoming exhibit “Shipwrecks!” is one that was featured at the museum in the past. Smith said the museum used to have an area set aside for shipwrecks that have happened along the Oregon Coast.

However, the materials were taken out of the space to make room for the “Mapping the Pacific Coast” exhibit, which is still ongoing. Now, after nearly 10 years, “Shipwrecks!” is making a comeback. This time, it’s here to stay.

“I had always told myself that someday we were going to revisit shipwrecks because it’s a prominent theme,” Smith said.

One of the featured shipwrecks include the Peter Iredale, an iron-hulled ship that ran aground on Clatsop Spit Fort on Oct. 25, 1906. Remains of the wreckage are visible on shore at low tide.

The exhibit will also showcase artifacts from the Exxon Valdez oil tanker to address the environmental impact that some shipwrecks have on the ocean and its wildlife. Although the wreck and oil spill took place along Alaska, Smith said there’s a lot to be learned from the incident, as well as other shipwrecks altogether.

“We have to dig through the archives, dig through newspaper reporting and talk to people who grew up hearing stories about this and that,” Smith said. “It’s a very human story, not just about a bunch of rusty ships.”