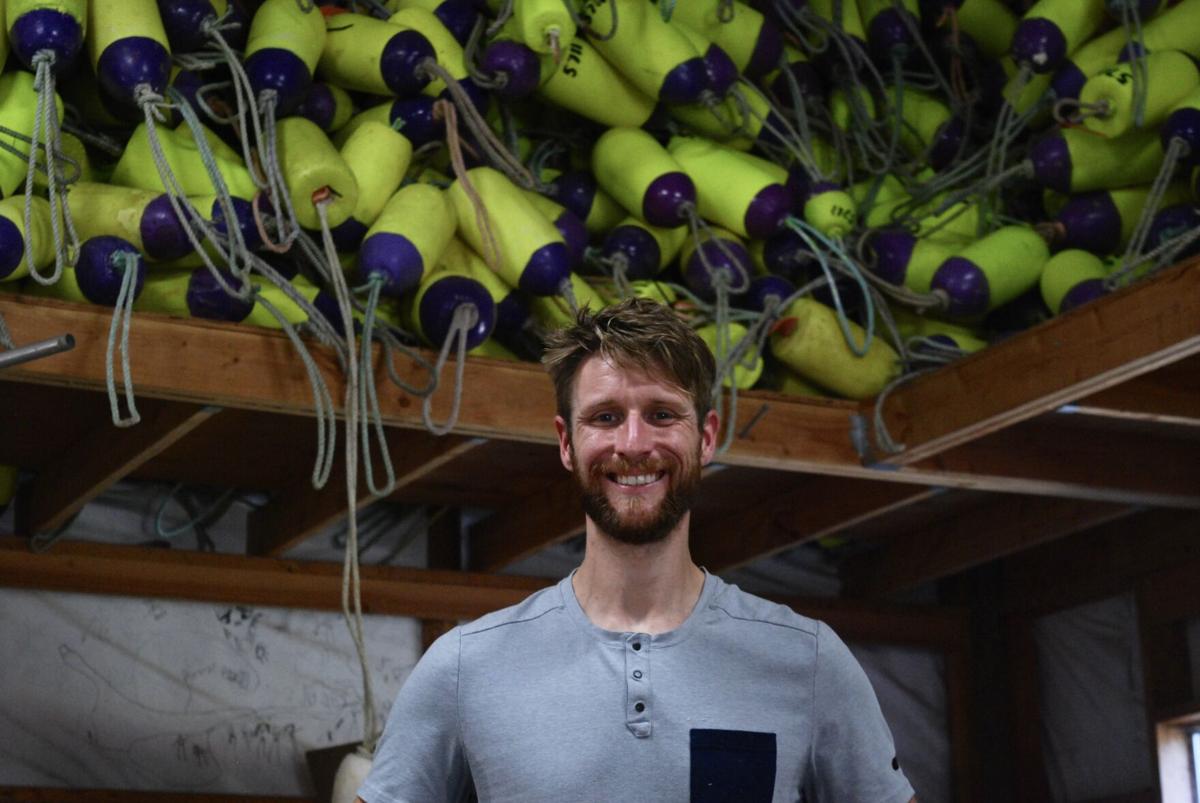 Jeff Nesbitt records his podcast out of a crab shed. 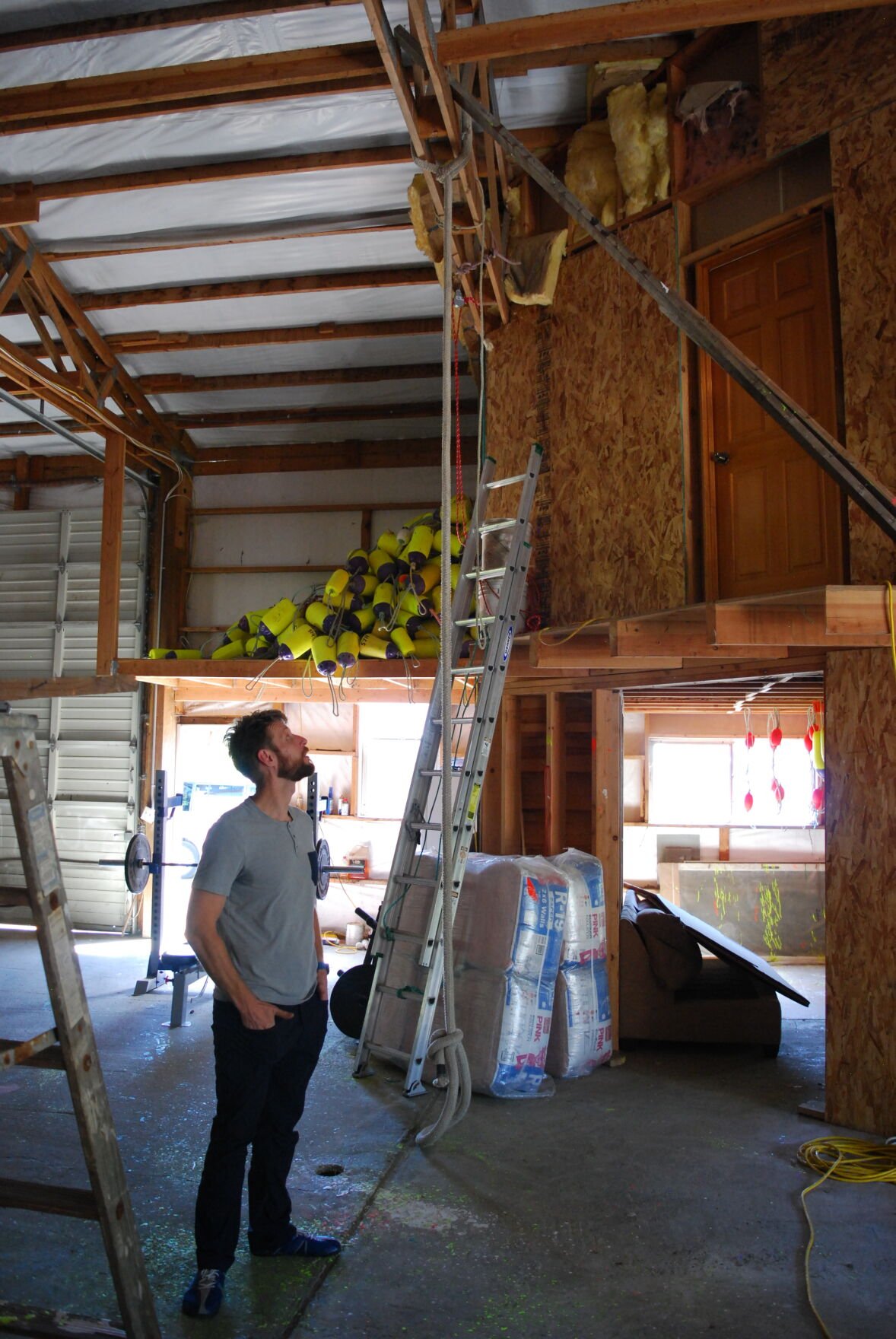 Nesbitt looks inside the crab shed, where he records ‘Ramble by the River.’ 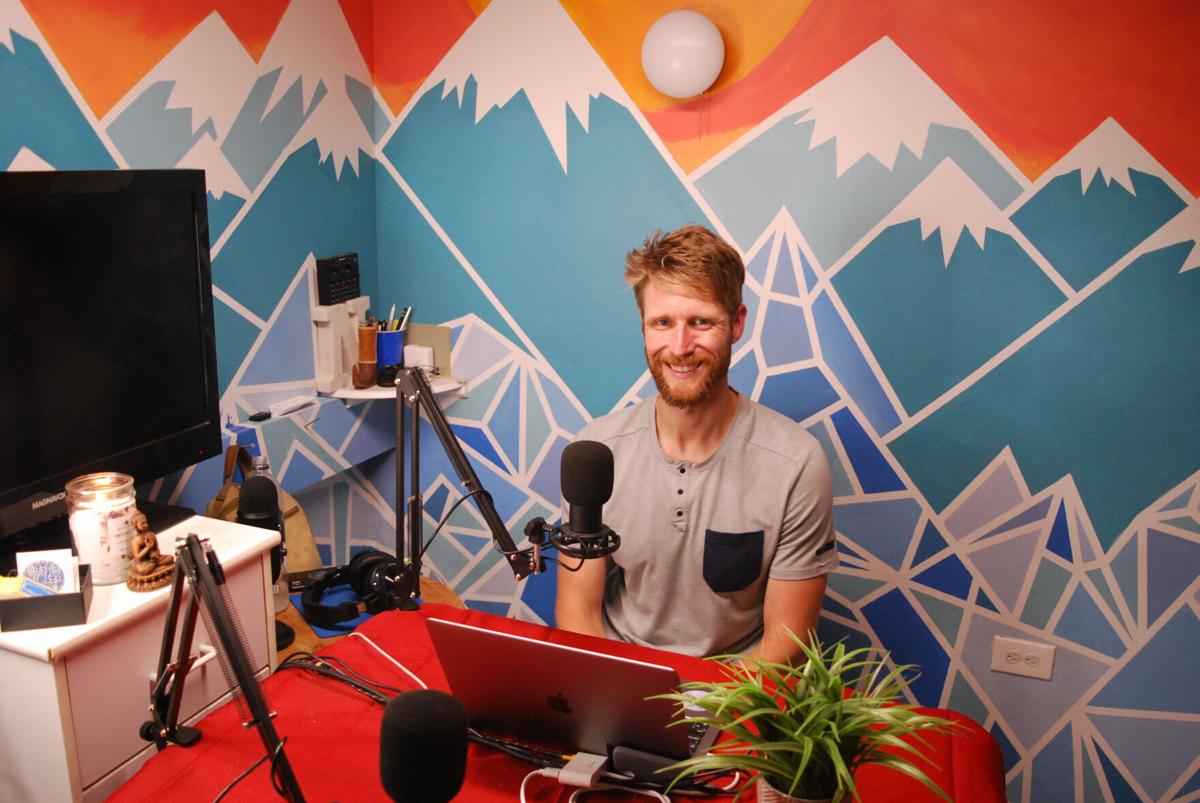 Nesbitt sits inside his studio. He painted the walls. The logo for Nesbitt’s podcast.

Up two narrow flights of stairs in the loft of a crab shed in Chinook, Washington, is where you might find Jeff Nesbitt recording his next podcast episode.

Nesbitt launched his podcast “Ramble by the River” in January and has since hosted 31 episodes featuring conversations with guests from all walks of life.

Nesbitt grew up on the Long Beach Peninsula and now lives in Chinook with his family. Working in natural resources by day, the podcast gives him a creative outlet. Ramble by the River is Nesbitt’s first public creative project.

“I felt like I needed to make something and I always wanted to make a podcast,” Nesbitt said, “because when I listen to podcasts, I have things to add. I found myself wishing I was in the room.”

The coronavirus pandemic pushed Nesbitt from wishing to building a recording studio. He renovated a small corner of his father-in-law’s warehouse used to store crabbing gear. On the walls that surround his audio set up, Nesbitt painted a mural of abstract jewel-toned mountains.

Nesbitt was not experienced in audio production before starting the podcast, so he had to study up and learn on the fly. Podcasting may seem as simple as hitting record, “but it’s a lot more involved than that,” Nesbitt said. “The audio engineering portion of it is insanely time-consuming. I didn’t anticipate that.”

Through his first 31 episodes, Nesbitt’s guests have included his friends and family, local business owners, a golfer, a commercial fisherman, and a climate activist. The topics that Nesbitt and his guests cover are even more expansive.

“Cryptocurrency, consciousness, the nature of reality, spirituality, economics, religion, those are the hits,” Nesbitt said.

However, it’s not necessarily the topics that inspire the conversations.

As with any ramble, conversations on the podcast meander around the minutiae of daily life to guest’s backstories and big life questions. However, Nesbitt and his guests also stumble upon tricky subjects and difficult stories.

One of the more difficult moments on the podcast for Nesbitt was to sit with grief and pain in a conversation with Lindy Swain about the death of her niece Dylan Jude Harrell (the namesake of Dylan’s Cottage Bakery in Long Beach).

“I generally make jokes about everything and try to get away from the discomfort, and you can’t really do that there. I just had to sit in it and be present and uncomfortable,” Nesbitt said.

In another episode, “Holding on to Hope with Mario Rodriguez,” Nesbitt spoke with guest Mario Rodriguez about his community involvement on the peninsula and his residency status, which is in limbo as he seeks asylum in the U.S. Rodriguez shared that he came to the U.S. from Mexico 18 years ago because he is gay and would not have been treated well in Mexico.

“I came here in a self-imposed asylum,” Rodriguez said. “I have found good people, great people, and it’s a small community, everyone is together.”

Nesbitt didn’t set out to create a podcast with serious themes.

“I had just planned on making it a strictly light-hearted and funny podcast so that I could do that and cover serious topics if I wanted to,” he said.

However, the opportunity to talk with Rodriguez fell in his lap. In the episode’s introduction, Nesbitt shared some of his opinions on immigration and research he did to prepare for the conversation.

“I’m not an immigration expert. I’m just a guy. And I’m just sitting down here today to talk to another guy who really needs our help and who’s being treated unfairly and who has so much to offer society, but he’s being thrown away,” Nesbitt said.

Listeners can expect most episodes to be generally light-hearted and funny conversations with guests who end up feeling like friends. Nesbitt has steadily posted new episodes weekly, plus bonus episodes. He said he is proud of the listenership and reach of the podcast.

“We’ve been downloaded in 37 countries … and as of today we have 2,234 unique listeners,” Nesbitt reported in early June.

Making the podcast has brought more connection to Nesbitt’s life.

“I’ve been connecting with people from high school and people from college and people who I’ve known my whole life, but I didn’t actually talk to … it’s wonderful, I really enjoy that part of it and it makes me feel like what I’m doing is actually community-building,” he said.

Episodes of 'Ramble by the River' are available to listen to at ramblebytheriver.captivate.fm/listen