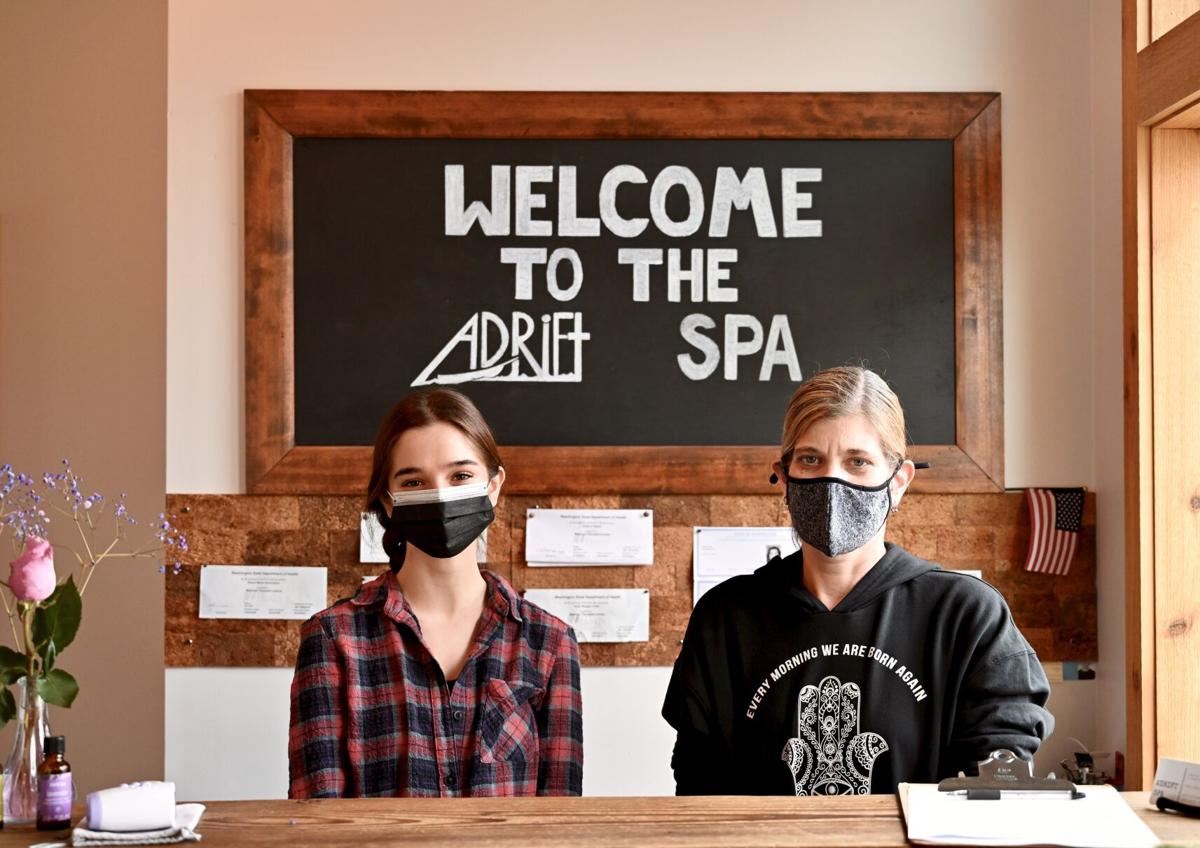 Jackey Habermann, left, and Stacie Habermann pose during a shift at Adrift Spa. 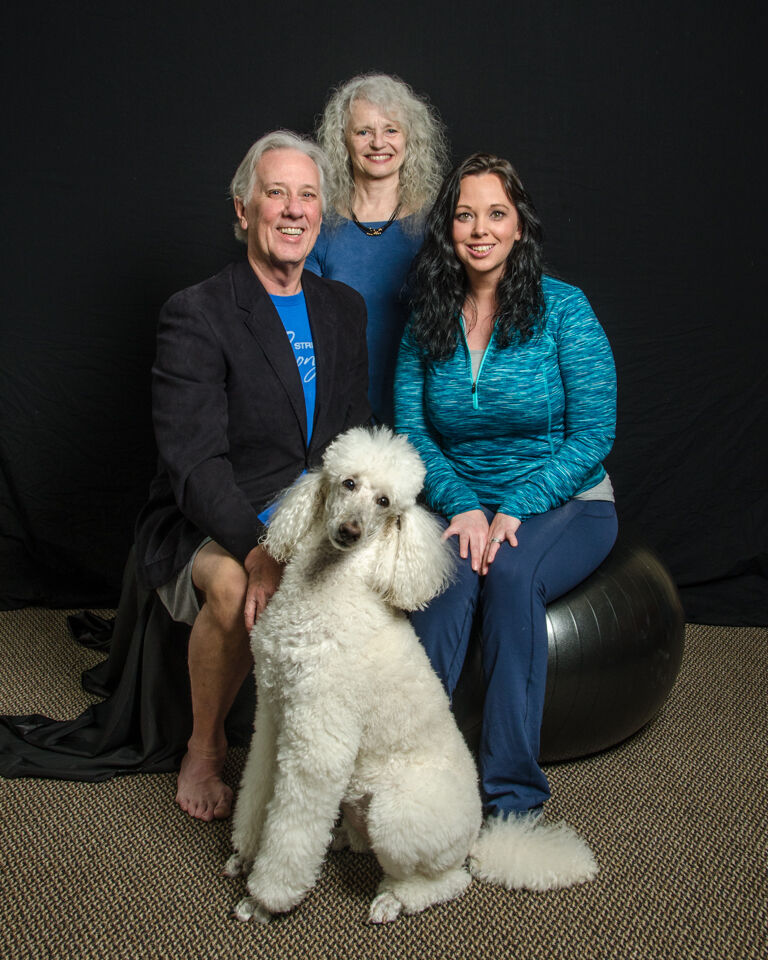 Amy Chadwick’s business, Azure Salon & Spa, has weathered catastrophes before but not like the coronavirus pandemic.

The spa is one of many regional health businesses that faced challenges to continue operating during 2020.

“None of us ever thought that we would be closed down out of a state mandate or a national mandate,” Chadwick said. “We were shut down for two and a half months.”

Staff stayed in contact during the shutdown, checking in on each other through Zoom calls.

“We actually took advantage of that closure time to make some changes inside the salon,” Chadwick said. “We replaced flooring and replaced some equipment and repainted, which was really awesome and offered us a fresh start.”

Chadwick started Azure Salon & Spa in 2005, with two other hairdressers, a nail artist and a massage therapist. She bought their current business location at the peak of the 2008 financial crisis, when the business was doing well. They were looking at potentially growing to accommodate a few more hairdressers and a nail artist but then everything changed when the market turned. The business went from seven people, to two.

Chadwick found an opportunity to support the business through the Washington State Cosmetology Apprenticeship program, a pilot program that they partnered with to teach cosmetology students. They were one of the first salons to participate in the program.

Since 2009, the business had slow, steady growth and continued to build strong roots in the community. They are back to seven people at the salon.

“Looking back on things now it’s kind of amazing because with COVID — if I had a big salon it would have been incredibly difficult to get through this time,” she said.

The salon now has minimal furniture to prevent having places to touch and collect germs, and make the space easier to adjust to capacity limits. They have increased their cleaning and sanitization schedule.

Chadwick credits the salon’s survival through historic moments to the support of their customers.

“It’s kind of amazing that we have forged these relationships with our clients that through the recession and through this pandemic, they are still here for us and we are here for them. It really speaks to the connections that are made in a salon,” Chadwick said.

Since the first set of coronavirus pandemic closures in March, Peggy and Dave Stevens, co-owners of RiversZen Yoga, have offered virtual yoga classes.

“Overnight — over the weekend as a matter of fact — all of a sudden we were an online business,” Peggy Stevens said.

The couple had already had done some research on hosting virtual classes so they were able to quickly adapt. They were in a unique position, having two business locations in two different states. The business mostly stayed online because changing restrictions and capacity rules.

Over time, some clients, even folks who she thought would never go online, grew to really love the online yoga instruction, Peggy Stevens said.

The Stevens’ started RiversZen Yoga in 2012. Their techniques stem from Ki-hara, a resistance stretching technique that supports the body’s longterm mobility.

“We are not the normal yoga studio,” Peggy Stevens said. “We came to it from how we healed our body.”

Over the years, they added therapy balls and a technique called voodoo floss, which helps reduce inflammation from injuries. Their daughter, Kimberley Gibbs, also became a trainer.

“We focus on breath, hydration, nutrition, motion and sleep. Those five pieces all go together and are the key to less pain,” Peggy Stevens said.

People are slowly coming back to in-person classes at the RiversZen studios, Peggy Stevens said. They are able to allow up to five people in Astoria location and seven people in Ilwaco, Washington. They have not had to change their cleaning regimens much because they have always been focused on maintaining a hygienic space. The biggest change to the business has been the shift toward online classes, which they are excited to continue long-term.

“We will very clearly continue to be online — that won’t change,” Peggy Stevens said. “There really isn’t any reason, for a lot of the things that we do, that we can’t do them on Zoom.”

Adrift Hotel + Spa in Long Beach, Washington has seen an increase in patronage, thanks to the reopening of lodging in Pacific County, said Kacia Lessnau, the hotel’s chief commercial officer.

“The pendulum has swung from not being able to have access to those services for a while, to now that we are offering them … it’s definitely being taken advantage of, by locals and people here vacationing,” she said.

From March through May of 2020, things looked very different at the hotel and spa. There was hardly anyone there, she said. Though they were seeing hard times, they found another way to keep bringing in some revenue while helping the community: Adrift Distillers hand sanitizer. Lessnau’s husband, Matt, helped navigate the local community to offer the sanitizer to places like schools and firefighters.

“He just got scrappy and contacted the different school boards once they started talking about school going back in session,” Kacia Lessnau said. “We provided quite a bit of sanitizer. At the beginning there, it was this rare-seeming commodity.”

The pandemic hitting was unfortunate timing for the spa itself, which was newly renovated and has a co-located sauna and saltwater pool. As primarily an amenity for hotel guests, the lack of hotel guests meant a lack of spa guests too. The spa’s massage therapists and estheticians are independent contractors and lost revenue they would have made.

Now, with that pendulum swinging and people feeling more comfortable to travel, the spa is recovering well — the massage therapists are fairly booked, she said. She sees a greater appreciation for these health experiences in everyone, now that we have experienced life without them.

“In general, there’s this appreciation for things that we took for granted before, maybe? And an increased appreciation for your own health and wellness,” Kacia Lessnau said. “I do think that people are going to be more intentional about those experiences — coming to the coast and wanting to be outside and experience nature, and feel like they can get a great massage at the end of the day and sit down at a restaurant if they want.”