The peak of Neah-Kah-Nie Mountain. 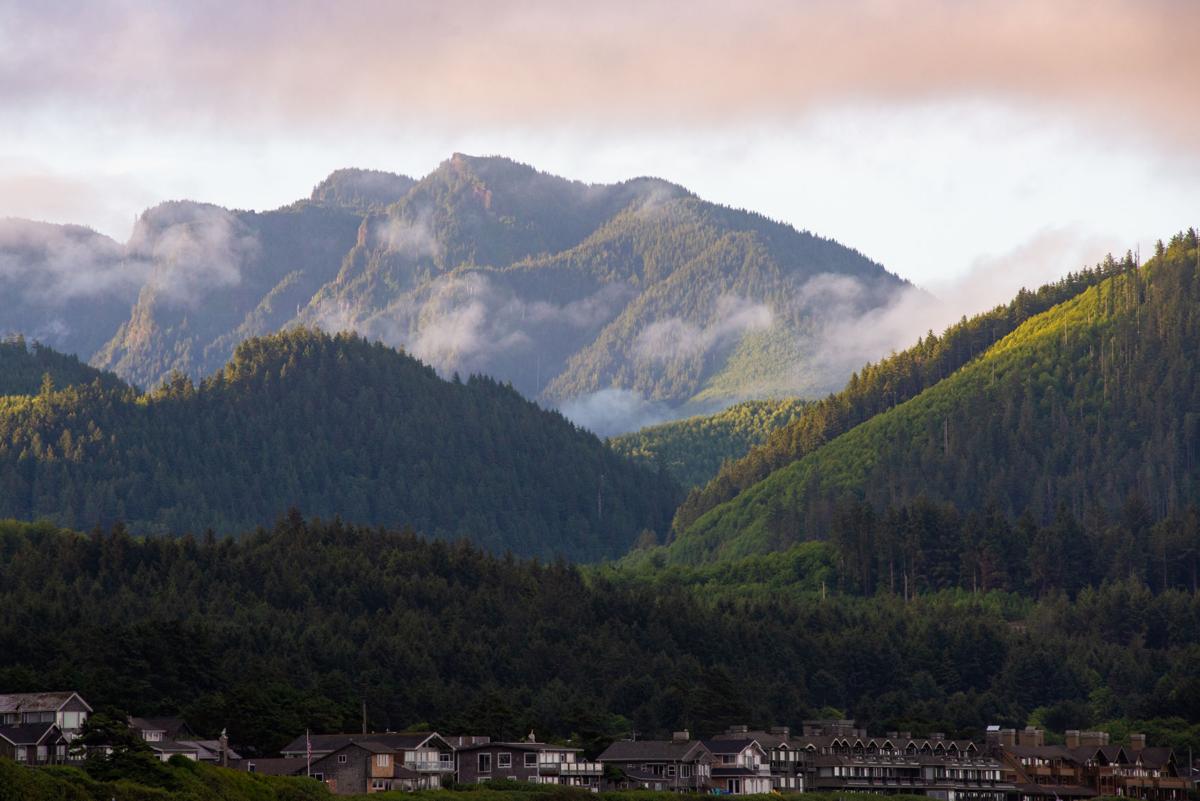 Visitors walk along the beach in Seaside. The old military base at Fort Stevens State Park.

Neah-Kah-Nie Mountain is often shrouded in fog and is the source of many supernatural tales. The 2005 horror movie “The Fog,” was set in a fictional island off the North Coast. The story loosely resembles local ghostly tales.

In 1693, a Spanish vessel wrecked on the Nehalem Spit, at the base of the mountain. Legend has it that Spanish treasure is buried on or near the mountain with ghosts protecting it. Survivors made it to the beach, carrying a treasure chest in a longboat. The men dragged the chest onto the mountain and dug a hole. The captain supposedly shot a slave and buried him on top of the treasure. The captain also shot and buried some other crew members. He and the remaining crew rowed toward Mexico.

At least three treasure hunters have lost their lives on the mountain. In 1931, Charles Wood and his son, Lynn, dug a 30-foot-deep hole into the mountain, without adding any supports. A cave-in killed them both.

In 1990, two treasure hunters rappelled down the mountain to search for treasure from the water, in an inflatable raft. Waves swept them into a cave and both men were stranded. One of them, Samuel Logan, was pulled back out to sea by another wave and subsequently drowned.

Dreams of treasure prompted generations of treasure seekers to riddle the mountain’s landscape with pits and trenches, giving it the nickname “mountain of a thousand holes.” From 1967 to 1999, the state of Oregon formally allowed permits to search for treasure on state-owned lands. However, Oregon’s “Treasure Trove” statute was repealed in 1999, making treasure hunting illegal on Neah-Kah-Nie Mountain and nearby beaches.

The story of Bandage Man, as reflected in media and legends, all begins with a secluded stretch of U.S. Highway 101 in Cannon Beach. He is said to haunt the U.S. Route 26 overpass. Legend dates to the late 1950s with the story of a young couple who sat parked in their pickup truck near the beach. Suddenly, the truck moved as if someone had climbed into the cargo bed. They turned, looked through the back window, and saw a disfigured man, covered in bloody bandages, rocking back and forth. They reported that he started beating on the back window and roof. They raced away, down the highway. The bandaged man disappeared.

Others have since reported seeing Bandage Man jumping into open bed trucks and convertible cars’ back seats. Others say they’ve seen him walking along the beach, down U.S. Highway 101 and on a short road called “Bandage Man Road.”

Some people believe he’s the tormented ghost of a logger who died in a horrific accident while working in the area.

Another legend also reports Bandage Man was a logger in the 1930s, who was badly injured on the job. He was wrapped in bandages and sent away in an ambulance. However, that ambulance fell victim to a landslide en-route to the hospital. When the rescue crew arrived at the landslide location, he was reportedly gone.

Some witness accounts say he tries to jump into passing cars, which is why some locals avoid driving down U.S. Highway 26 after dark.

Bandage Man was the subject of a 1974 University of Oregon Northwest Folklore research study titled “The Bandage Man Legend: A Cannon Beach Legend.” The study explores the haunted tales and legends passed down since the 1950s. He was the focus of a 2003 horror-comedy film entitled “Bandage Man,” directed by multiple-award-winning Irish filmmaker Ivan Kavanagh. The movie stays relatively true to the legend. It tells of a man who regularly travels at night on the U.S. Highway 26 overpass, despite warnings not to do so. As it turns out, the man is looking for Bandage Man, who he visits weekly to provide with another dog to eat.

The most recent documented sighting of Bandage Man occurred in 2019.

A salty séance in Seaside

The Seaside Aquarium is the oldest privately owned aquarium on the West Coast. It was built in 1924 as a saltwater bathhouse and became an aquarium in 1937. Legend says it is haunted.

In the 1920s, the town of Seaside had three large indoor pools. One of the three was the Seaside Baths Natatorium, which would later become the Seaside Aquarium.

The facility contained a large indoor heated concrete swimming pool filled with heated saltwater. There was a big fountain in the middle of the pool that people sat upon and a children’s wading pool, with a large window facing the ocean. Bands would play at the natatorium and people would gather for fun. In 1932, the Great Depression forced the Seaside Baths Natatorium to close.

Following its closing, the facility was used as a salmon farm, then a location to watch wrestling matches. Both of these efforts failed. Since that time, many witnesses have said the building is haunted by unknown spirits, perhaps those of rumored drowning victims said to have died while swimming at the natatorium.

The building was remodeled and opened as the aquarium in 1937. Admission prices were 15 cents for adults and 10 cents for children. In 1938, the Sea Water Apartments were added to the third floor, remaining in use until 1970 when they were vacated and a period of renovation lasting 35 years began. On this third floor, paranormal activities are said to exist. The public can’t access this area.

There are ghostly remnants of former residents’ lives, with old beds and other furniture, fixtures and a board displaying the names of the last people who lived here. There are also rickety and tilting floors. Some employees have reported hearing voices at night. Others have reported footsteps, knocking and other unexplained events.

Fort Stevens was built 1863, during the Civil War, and was in service until 1947. The fort was on alert during several wars, including the American Indian Wars, Civil War, Spanish-American War, World War I and World War II.

The Travel Channel program “Ghost Adventures” visited the fort in 2019 to look into stories of the fort’s haunting.

Visitors and staff have reported seeing the ghosts of soldiers, one in full battle gear, one carrying a long knife and one carrying a flashlight, wandering the grounds, appearing to be searching for possible enemy soldiers. Two appear to be dressed in Civil War-era uniforms, while the other is dressed in World War II-era clothing.

Disembodied voices and footsteps can be heard. Glowing spirit orbs have been seen in the old guardhouse. The stories of these ghosts’ presence are usually connected with unexplainable noises and rushes of cold air.

The most haunted spot is said to be Battery Russell, where cold spots, strange noises and ghosts are reported. Some have said they heard a ghost walking through gravel outside their tent in the current camping area.

One witness sensed “echoes of pain and fear.” They reported seeing a man in fatigues holding a knife and another soldier hiding in the bushes. Other witnesses have described hearing faint wailing, as if someone was in pain, hushed yelling of someone giving orders, a disembodied voice saying, “get out,” and a feeling that someone was watching them.

Spooky tales on the North Coast

Ira Wesley Kitmacher, of Ocean Park, Washington, explores the history and tall tales behind many local towns in his soon-to-be-published book "A Road-trip Through the Most Haunted Place in America: the Graveyard of the Pacific."

Coast Weekend will feature excerpts from Kitmacher's book throughout October.