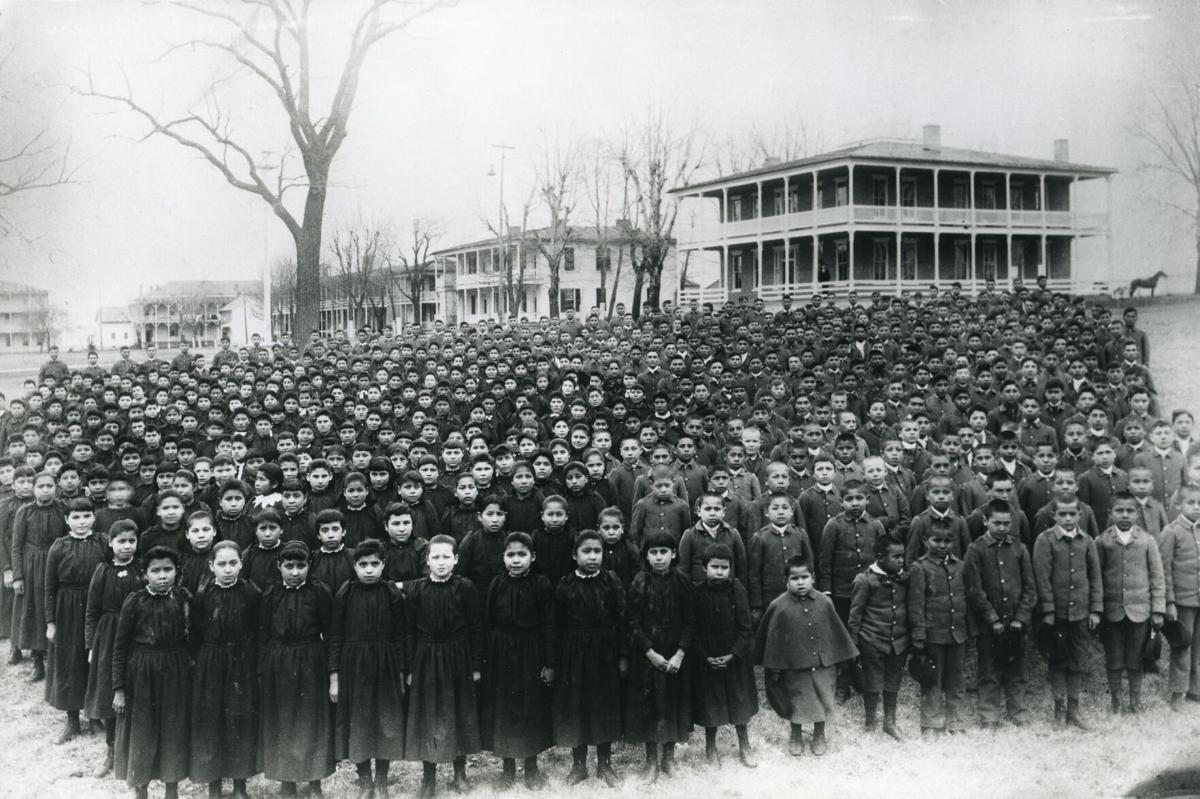 The student body of Carlisle Indian School in March 1892. 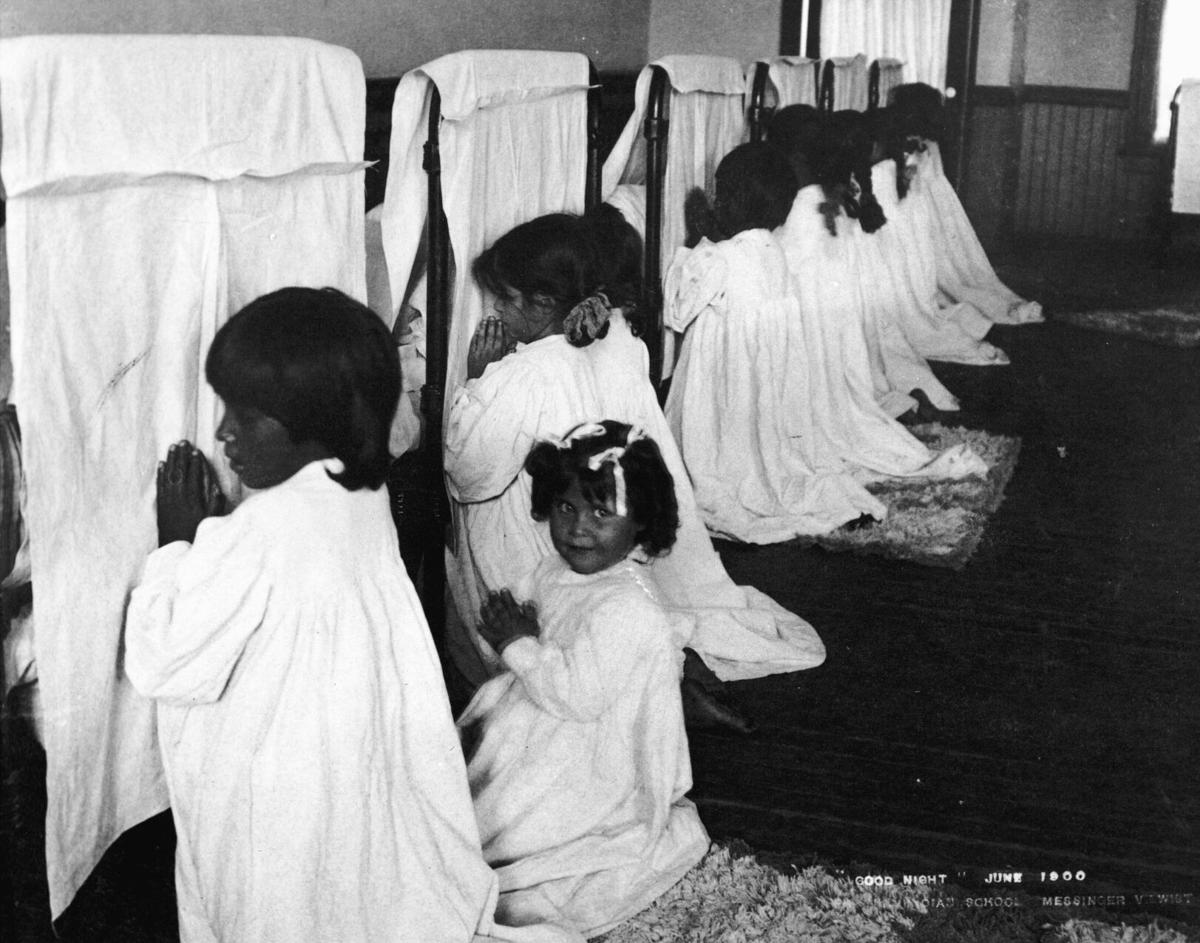 Children pray before bedtime at Phoenix Indian School in June 1900. Students were forced to convert to Christianity at the boarding schools. 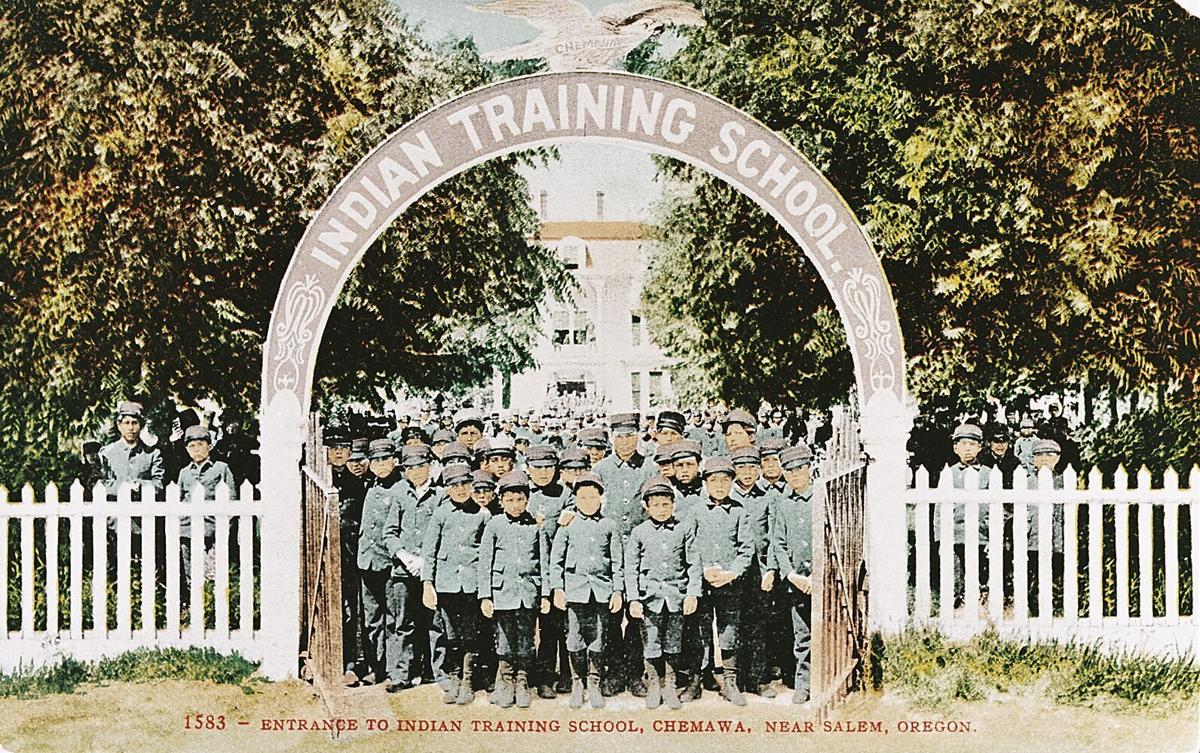 Students pose at the entrance of Chemawa Indian Training School near Salem in 1905.

It’s a tragic part of American history that many people are familiar with: the forced removal of Indigenous children from their homes only to be placed in boarding schools where they were subjected to intense conditioning intended to erase their cultural identity.

However, “Away from Home: American Indian Boarding School Stories,” a temporary exhibition at the Clatsop County Historical Society’s Heritage Museum, personalizes the complicated narrative of atrocity, trauma, resistance and transformation in a way that is poignant and educational.

“It very much humanizes it,” said Chelsea Vaughn, the museum’s curator.

“Away from Home,” which opened at the Heritage Museum on April 6 and runs through May 25, is a traveling exhibition developed by the National Endowment of the Humanities, Mid-America Arts Alliance and NEH on the Road. The Heritage Museum applied to be a seven-week host for the exhibition during its five-year tour to different locations throughout the U.S. This will be the only appearance of the exhibition in the Pacific Northwest in 2021.

Featuring the exhibit is a unique opportunity for the Heritage Museum, Vaughn said, adding, “We are a smaller, rural museum that often doesn’t house exhibits of this stature.”

In 2000, the Heard Museum in Phoenix, Arizona, opened “Remembering Our Indian School Days: The Boarding School Experience,” an exhibit which centered on the same subject. “Away from Home” is an update and expansion of that original work, with a focus on representing different perspectives and the varying experiences of Indigenous children.

The boarding school system originated in the early 1800s in the form of mission schools — run by religious denominations with support from the federal government — that were typically located in or near tribal communities.

By the late 1800s, then-Commissioner of Indian Affairs Carl Schurz determined it was more cost-effective to enroll a child for eight years of schooling than to kill them in warfare. The boarding school system became an impetus to shift from “actual annihilation to cultural annihilation,” Vaughn said.

The first school was established in Carlisle, Pennsylvania. By 1902, there were 25 federally operated facilities, including Chenawa Indian School in Salem.

Thousands of children were taken from their families and communities through a variety of methods, from coercion to actual kidnapping, and placed in faraway boarding schools, where they were assigned an Anglo-Saxon name and a number.

“Away from Home” combines the voices and personal stories of multiple people affected by this violent ethnocentric practice. Students often had no familial contact during their tenure. Speaking their native language was met with harsh consequences, and they were trained primarily to be domestic workers and forced to convert to Christianity.

“This is a terrible story of trauma,” Vaughn said. “The goal was ultimately to create a generational break, so children wouldn’t identify with their tribal roots.”

However, there’s another important part of the story, and that is how the students found a way — or rather a variety of ways — to persevere, resist and demand autonomy.

As Vaughn points out, “resistance takes all manners and forms.” Running away was a common practice, although it was dangerous, even potentially lethal, for children. Some students fought to maintain their traditions and native languages; others relied on creative expression and faith in themselves and their heritage.

According to information from the National Endowment of the Humanities, “American Indian boarding schools were creating to change native students; however, native students, through their leadership and political involvement, eventually changed the schools.”

Many children experienced their first contact with members of other tribal nations, which led to a rise of Pan-Indianism and the cultivation of connections and support networks across nations.

“This allows for better collective action,” Vaughn said, referencing the Occupation of Alcatraz, from November 1969 to June 1971.

This protest was conducted by Indians of All Tribes, Inc., a group made up of Indigenous people from various first nations. As the first intertribal protect action to focus that nation’s attention on the situation of native people in the U.S., it is still recognized as one of the most important events in contemporary history, according to the National Park System.

Today, there are still four functioning boarding schools, including Chenawa. They operate in a different way than they used to, embracing indigenous heritage, languages, traditions and culture.

“That transformation, again, came from within,” Vaughn said.

The museum has already received comments from patrons’ whose families were impacted by the forced removal of tribal children and the boarding school system. One woman recognized a family member in part of the exhibit.

“We have been hearing from people we didn’t know had this as part of their history,” Vaughn said.

In addition to the exhibition in the upstairs gallery, the museum also has an interactive, educational component housed in The Cedar People Gallery downstairs. According to Vaughn, they are recommending the exhibition for people 13 and older, or that parents see it first and then decide how to interact with their children about the material.