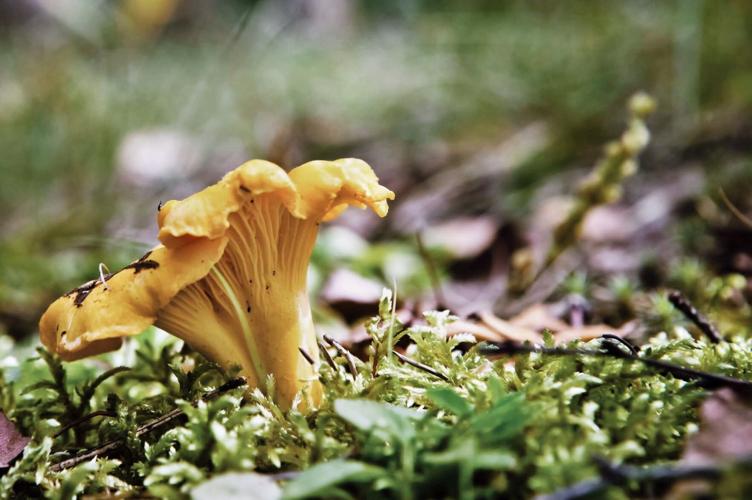 A chanterelle mushroom rests on a bed of green. 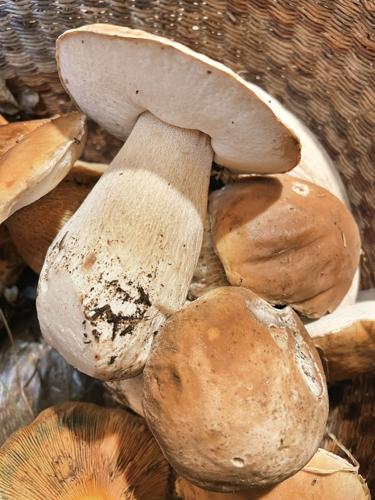 The porcini mushroom, also known as the king bolete. 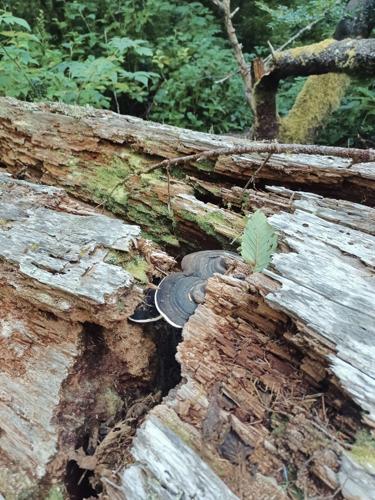 The weather was pleasant, many bright, clear days. Warm temperatures. A big bright sun ball, day after day. The garden blossomed. We had a couple of picnics in the yard. Rose time, wine with a blush. Small plates, delicious.

But still, no rain. After an insect blight two years ago, a number of old-growth trees died, from aphids apparently, though one couldn’t see any. Plain enough to see the casualties, though. In our yard, a great Sitka spruce succumbed. After all was said and done, only a stump was left, and several cords of firewood, a small consolation. We were saddened.

This summer, I spared precious water on the survivors, even watered the rhododendrons in the backyard. The ground was as dry as thirst itself.

An avid mushroom hunter, I began to calculate the long-term damage. The fungi grow best in a wet, humid environment, when autumn is still warm and the ground damp.

This year, the rains came in a fury. It was mid-October, ever so late. For a week or better, the ground absorbed the moisture. One could sense nature’s gratitude, all those mycelia groping underground, like invisible microscopic fingers, tendrils that shuffle protein to the trees, plants and mushrooms. Give and receive.

I figured another two weeks would pass before the mushroom fruit sprouted. I worried about the weather as it turned colder. Still, no mushrooms, or very few.

I walked to my favorite places, bushwhacked through tangles of underbrush. I walked the tall grasses, always attentive for my favorites — golden chanterelles, king boletes and the prized Japanese favorite, the matsutake. Oh yes, there are dozens of other edibles. Just not this season.

I believe that mushrooms carry vitamins and minerals that sustain the human body, saying nothing about the sublime taste. After months of waiting for the autumn season, my body was hungry for my small, delicious friends.

A third week passed without normal rain. Still, no mushrooms. There is generally an order to the annual display of fungi. The slippery jack is first, edible in an emergency.

Then the russula, a few of the species edible but bitter. Chanterelles — always edible — haunt the Willapa Hills and the high country in Clatsop County. They are ever so good, but reports appeared sparse.

Weather reports indicated a worldwide drought. Rivers were whittled down in Europe. Sunken Civil War vessels appeared in the shallows on the Mississippi. Africa was caked in dry, dusty desperation. Terrifying fires belted Siberia. The storm of the century devoured Florida, just behind the last one.

I found two porcini. A day later, another. Where were the others? There were no baskets brimming with edible fungal treasures. On the first of the winter winds, an answer revealed itself.

The mushrooms would sleep for another year. Go dormant. One fervently hoped that they would ultimately be back. And they probably will, if, of course, the rains come early. Or just on time: a downpour in August. Several in September. October, wet and warm at the same time. One more picnic, but sensibly — wear a sweater.