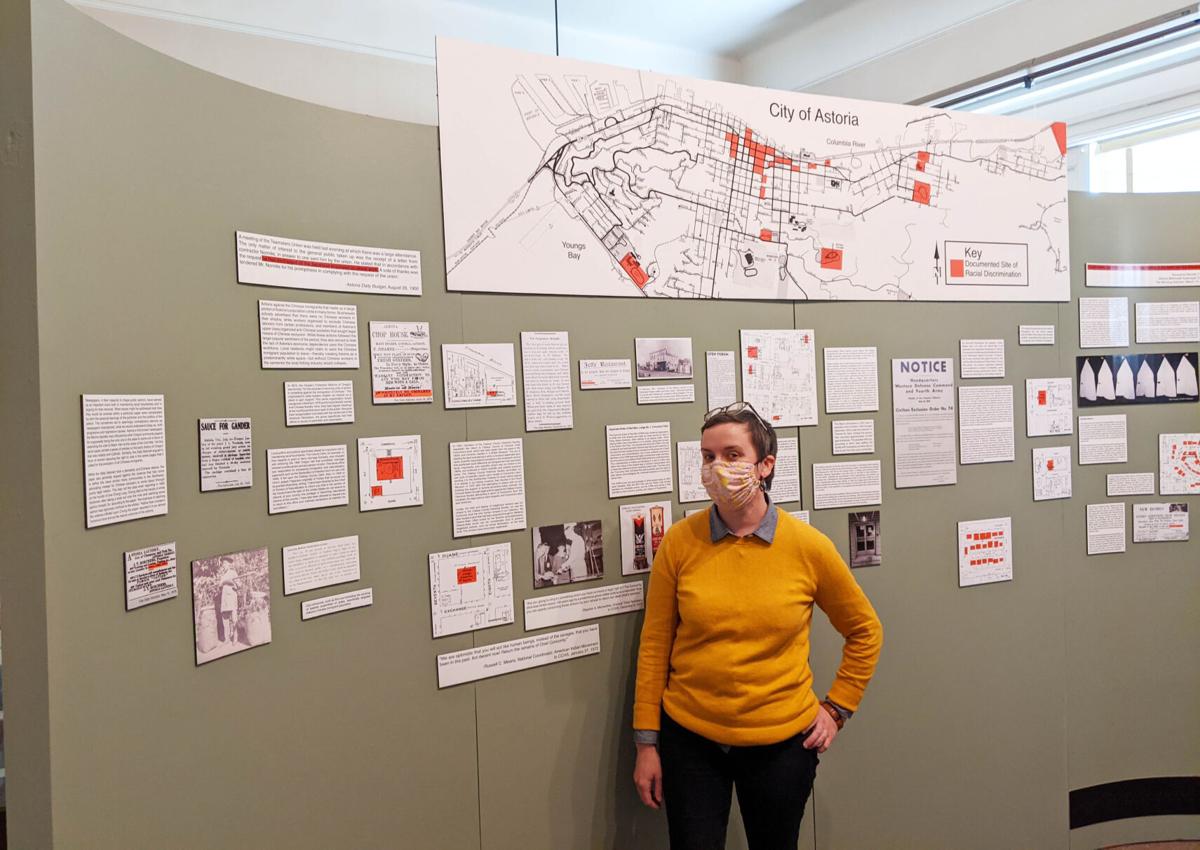 Dr. Chelsea Vaughn, curator at the Clatsop County Historical Society, stands next to the new exhibit 'Blocked Out: Race, Place, and the Making of Modern Astoria' at the Heritage Museum. 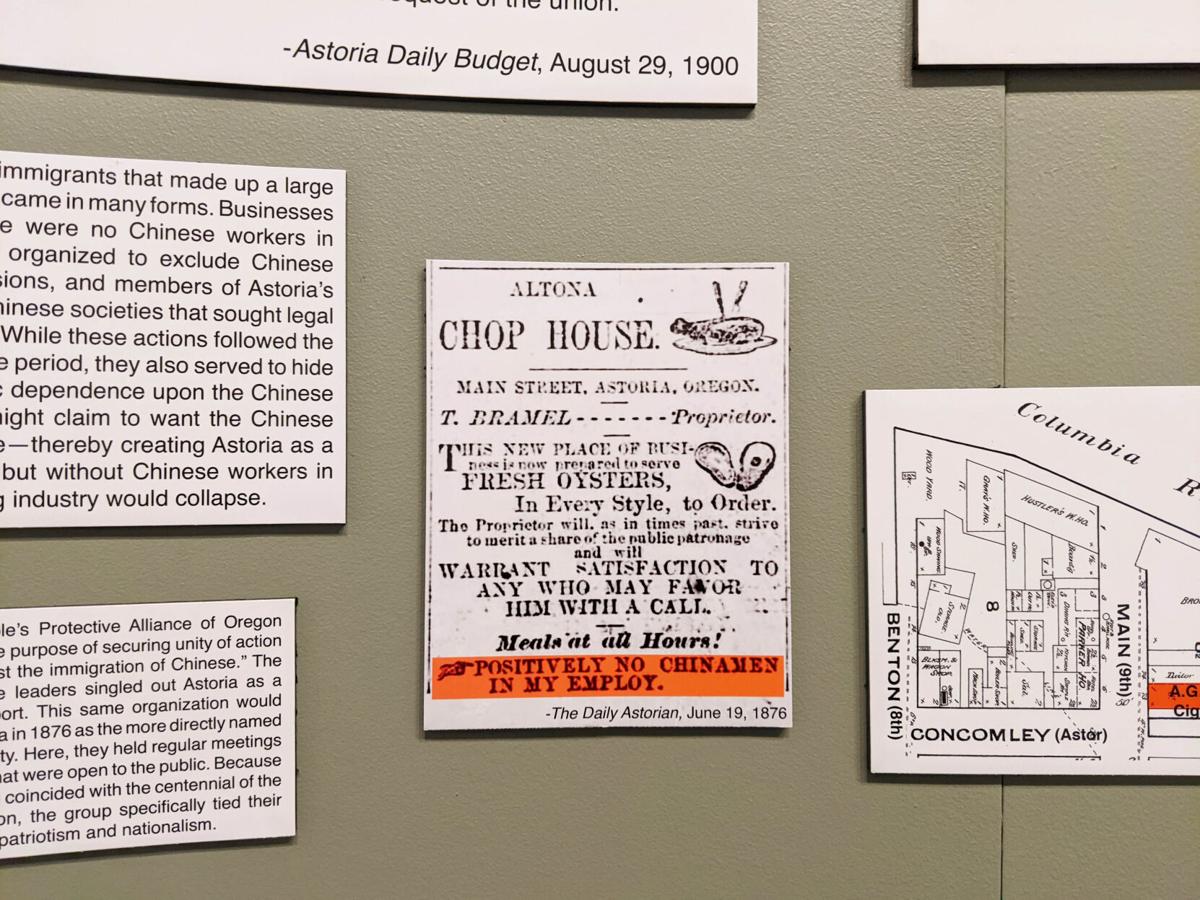 A news clipping from the late 1800s is part of the exhibit. 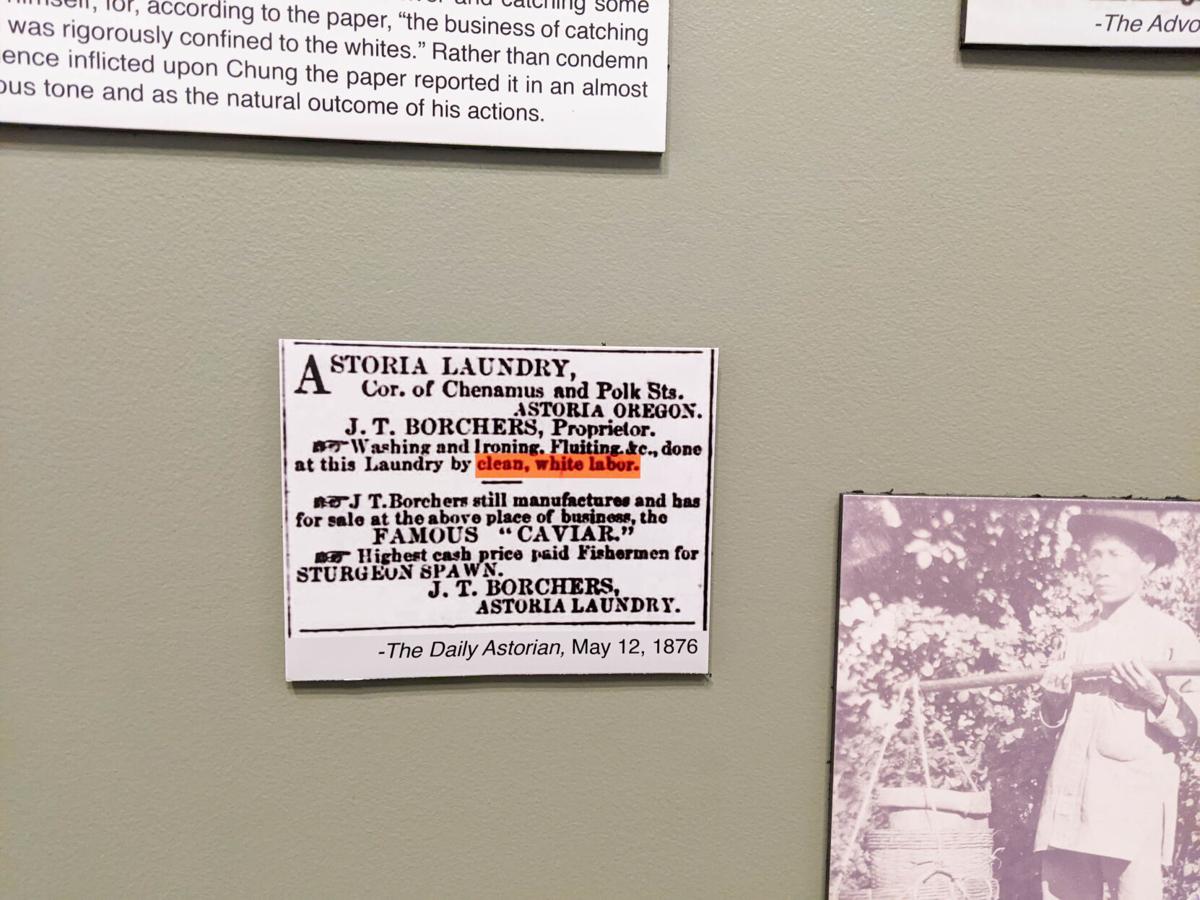 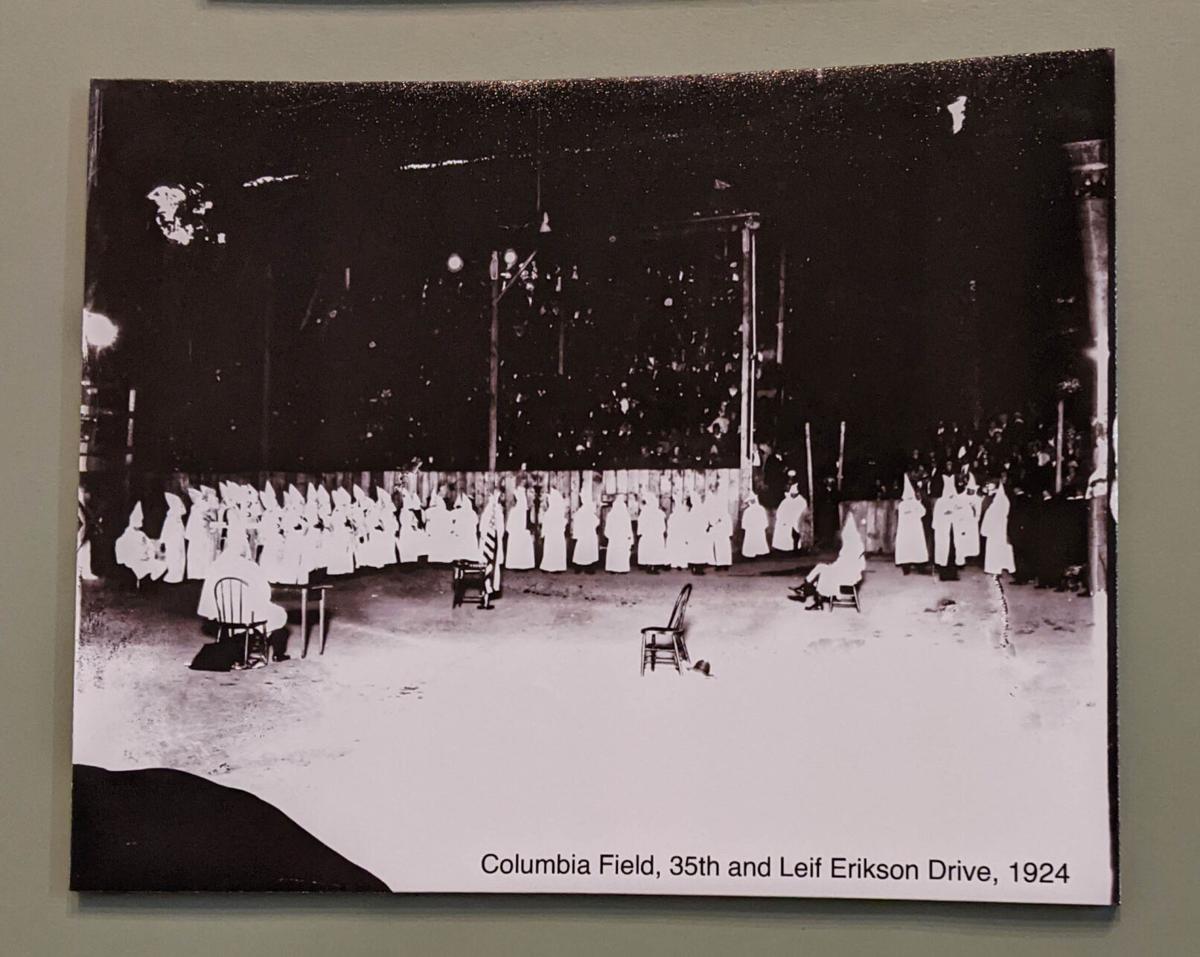 A photo of the Ku Klux Klan at Columbia Field in 1924.

Ku Klux Klan masks are seen in the exhibit.

Dr. Chelsea Vaughn, curator at the Clatsop County Historical Society, stands next to the new exhibit 'Blocked Out: Race, Place, and the Making of Modern Astoria' at the Heritage Museum.

A news clipping from the late 1800s is part of the exhibit.

A photo of the Ku Klux Klan at Columbia Field in 1924.

Ku Klux Klan masks are seen in the exhibit.

A new exhibit at the Clatsop County Heritage Museum challenges visitors to confront a somber side of Astoria’s history: racial discrimination and segregation.

“Blocked Out: Race, Place, and the Making of Modern Astoria,” on view now, tells this often unknown story of Oregon’s oldest town.

The centerpiece of the exhibit is a graphic map of Astoria depicting, in red-color overlays, locations where instances of discrimination occurred.

The idea, according to Dr. Chelsea Vaughn, curator for the Clatsop County Historical Society, who organized the exhibit, is to “connect racial discrimination to geographic space and locate ways in which actual physical places perpetuated and codified” these practices throughout Astoria’s history.

The Astoria Column location is highlighted in the map because the year prior to its construction, the Ku Klux Klan burned a large cross atop Coxcomb Hill. Klan members’ governance of Astoria in the 1920s led to the collapse of Astoria’s Black community, Vaughn said, pointing to census data.

Today’s American Legion building is on the map as the 1940s site of a separate USO that Black servicemen operated because they were barred from fraternizing with white soldiers (this was in the same space where the klan had held meetings decades earlier).

The historical society itself is in the red zone because it had displayed Chief Comcomly’s skull in the 1950s. “It’s very much about being accountable as well,” Vaughn said.

Texts, facsimiles and photographs support the historical narrative with specific, documented stories. The exhibition eschews physical objects, Vaughn said, in order to avoid distracting from the overarching narrative that reintroduces the story of people of color within the bigger story of Astoria.

Meanwhile, the panels are deliberately placed in such a way as to prevent seeing the whole exhibit in its entirety, forcing the visitor to navigate the obscured stories with deliberation.

Vaughn created “Blocked Out” with two goals in mind: to put the stories of people of color back into the history of Astoria and to document sites of racial discrimination incidents as well as systematic practices that created exclusion. “By having documented sites,” Vaughn said, the exhibit can “map this history in the spaces that we know and interact with every day.”

Even so, Vaughn added, the exhibit, including the map, “is woefully incomplete” because of how difficult it is to obtain documentation. “The klan rallies at Columbia Field were out in the open,” Vaughn said, pointing to photographic evidence; discriminatory practices in hiring or real estate were less so.

The nonprofit, Oregon Black Pioneers, which researches, recognizes and commemorates the culture and heritage of African Americans in the state, advised on the Black historical context for the installation. “This history is difficult to hear, but so important to learn,” said Zachary Stocks, the organization’s executive director and an Astoria resident. Discrimination was not limited to Blacks in Astoria, Stocks points out; Chinese, Japanese, Indian, Hawaiian and Native Americans experienced racial discrimination as well. “The exhibit is just one example of ways we can better inform people about how diverse our city actually has been over the decades,” he said. “The more we can learn about the many ethnic groups that shaped this place, the more we can respect their memory and tell their stories through our historic spaces.”

In this sense, Vaughn added, the exhibit challenges the “false presumption that Astoria is white because it’s always been white – that’s just false.”

While “Blocked Out” began as a temporary exhibit, the positive response from the community as well as its unfinished nature make the case for making it permanent. While there is no exact plan, Vaughn said, “this is too important of a story to limit to just a few months.”

'Blocked Out: Race, Place, and the Making of Modern Astoria'

On view at the Clatsop County Heritage Museum