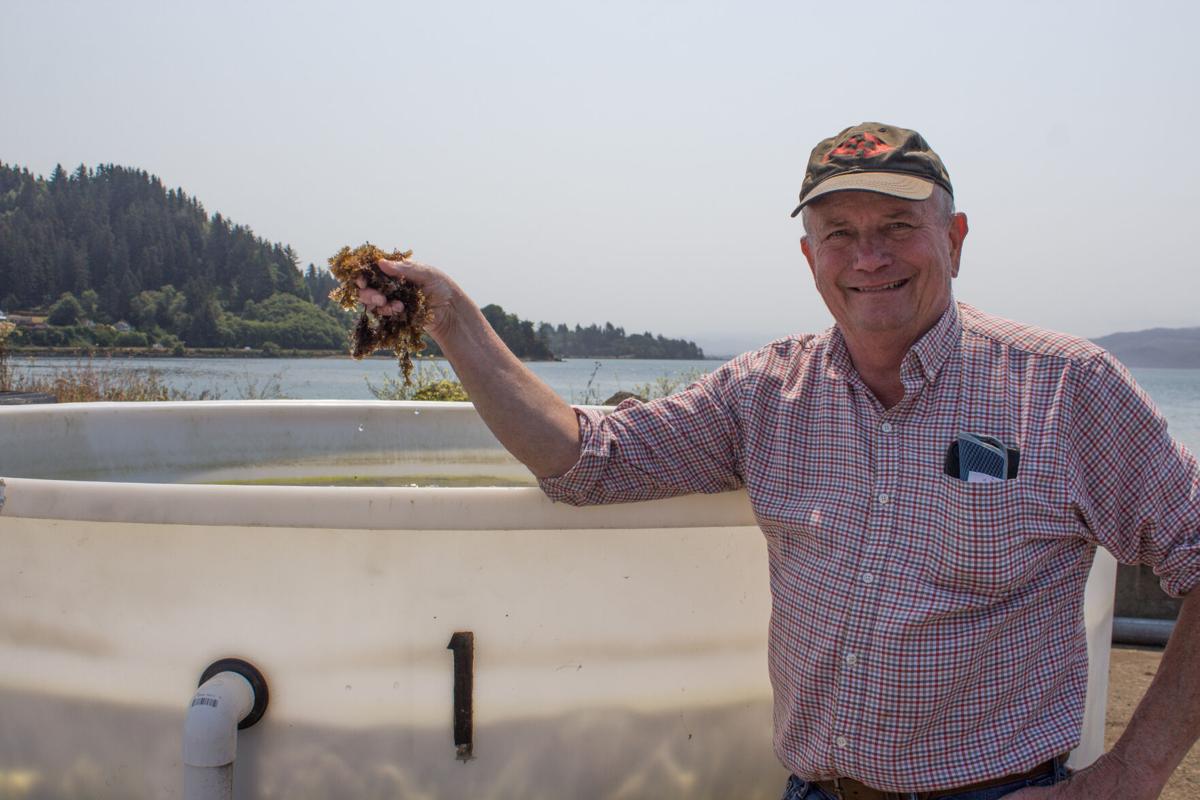 Chuck Toombs runs a seaweed farm at the Port of Garibaldi. 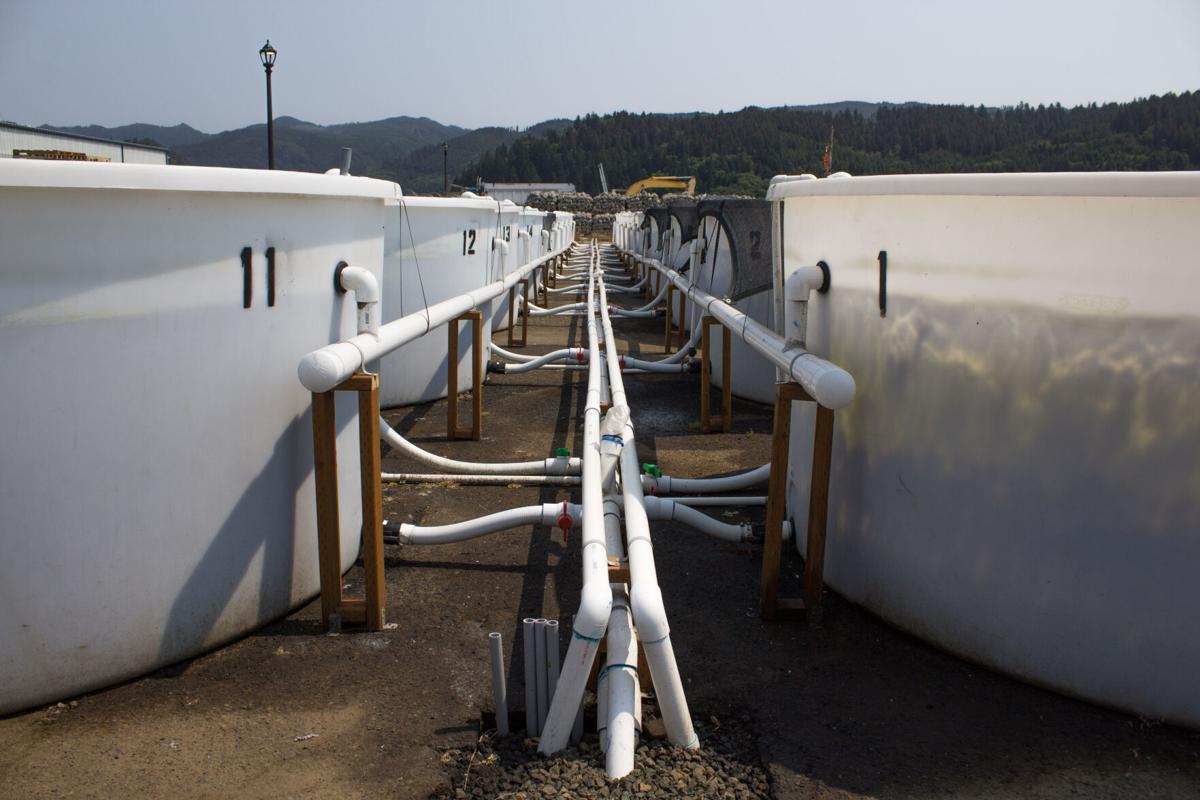 The Oregon seaweed farm consists of 20 growing tanks that use water pumped in from the nearby Tillamook Bay in Garibaldi. 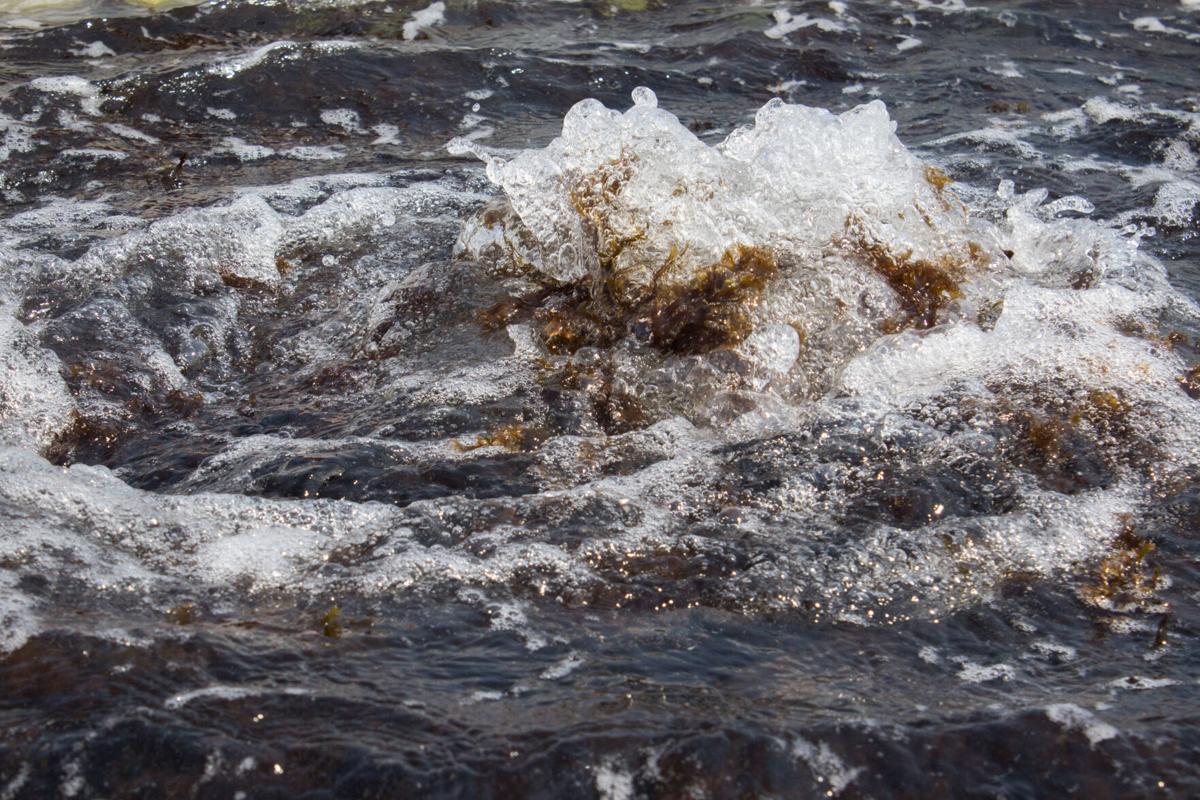 The dulse seaweed growing tanks on Chuck Toombs’ farm include a bubbler system that constantly rotates the seaweed, simulating the tide of the ocean. 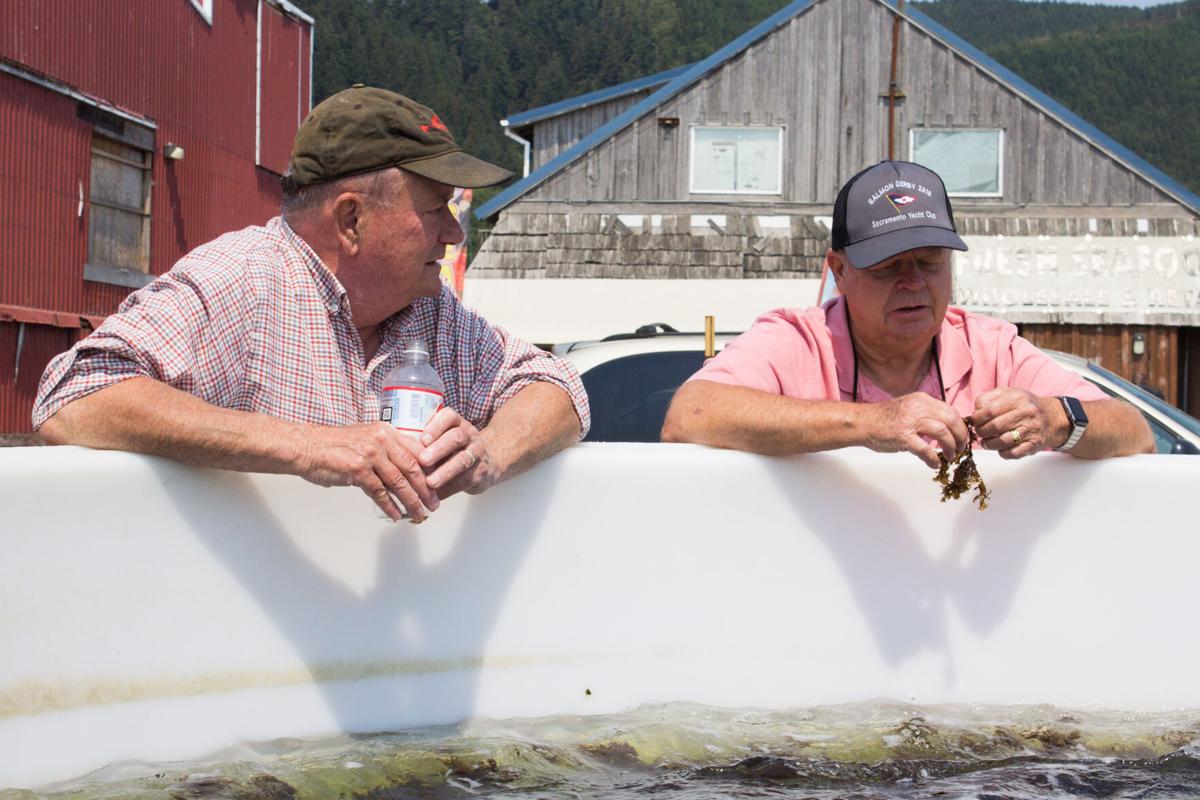 Chuck Toombs, left, explains the nutritional benefits of dulse seaweed to tourist Bob Lygren, who stopped by the Oregon seaweed farm in Garibaldi while on vacation earlier this month. 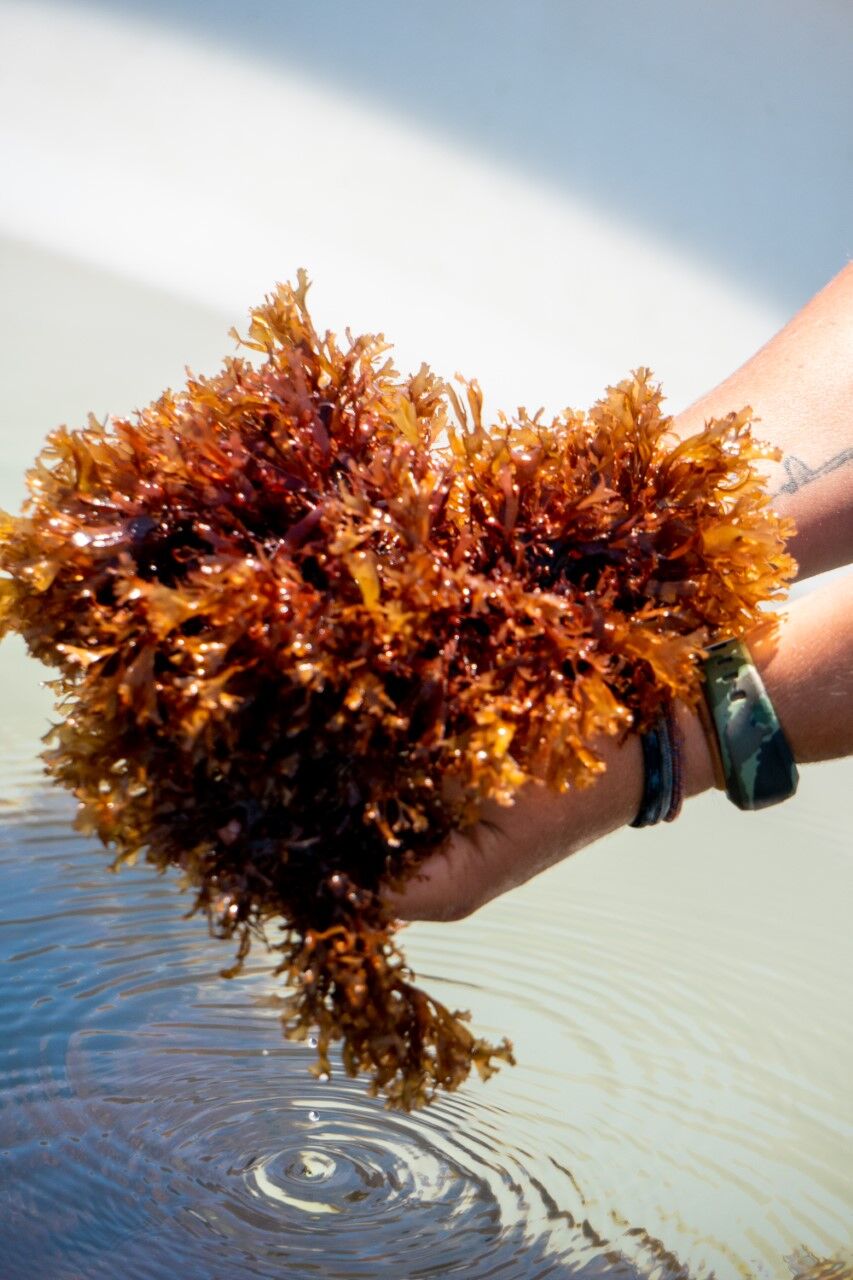 Dulse is a fast-growing, protein rich succulent red marine algae that can be use similarly to soybeans in the production of plant-based meat products. 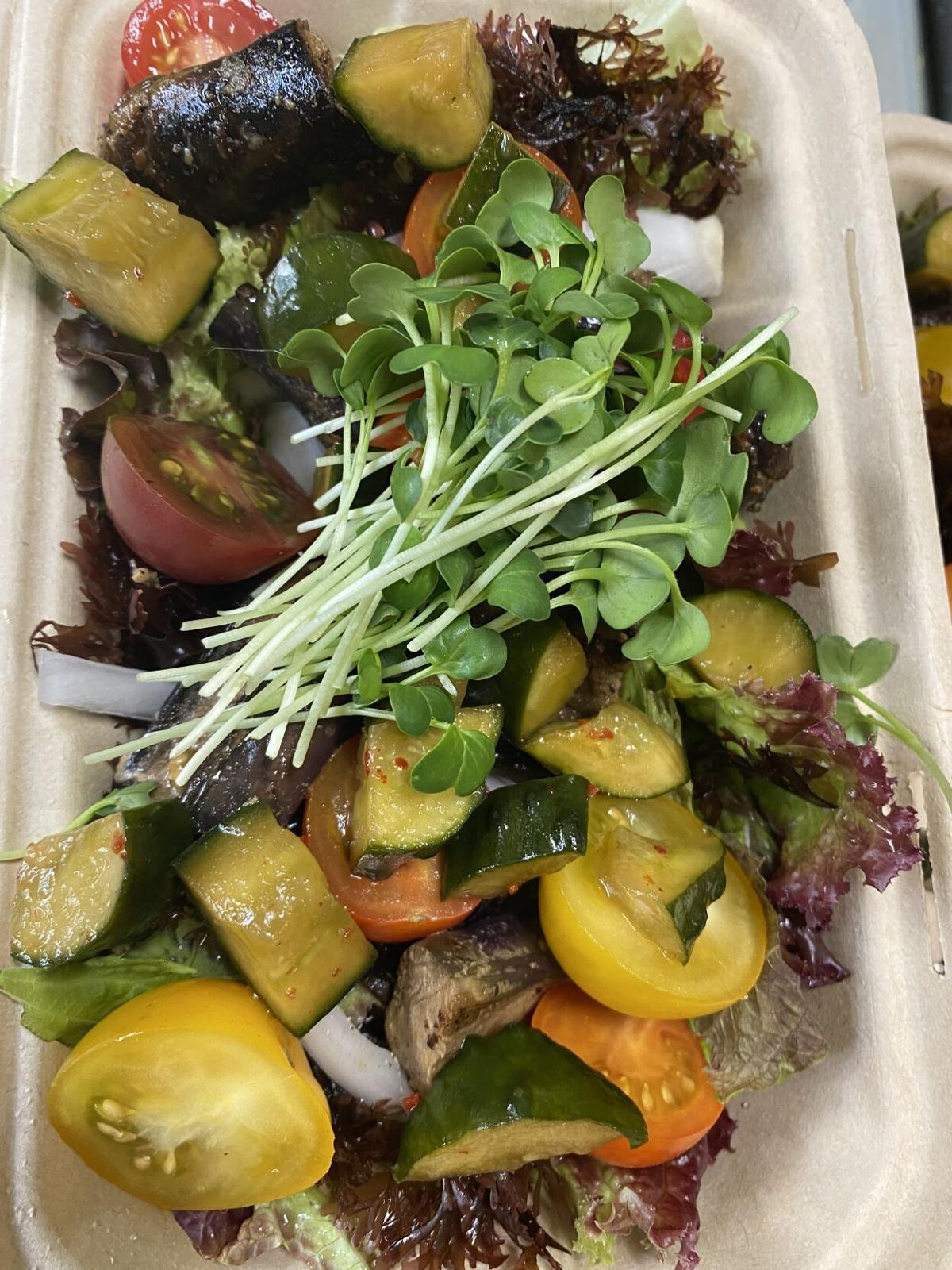 Būsu has created a dulse salad, composed of locally sourced ingredients. The restaurant says the dulse seaweed provides balance to the salad by adding a touch or saltiness that makes the other vegetables and the sesame wafu dressing pop.

Chuck Toombs, left, explains the nutritional benefits of dulse seaweed to tourist Bob Lygren, who stopped by the Oregon seaweed farm in Garibaldi while on vacation earlier this month.

Dulse is a fast-growing, protein rich succulent red marine algae that can be use similarly to soybeans in the production of plant-based meat products.

On a sunny afternoon in early August, a man walking among 20 large white tanks on the docks of the Port of Garibaldi caught the eyes of Sacramento residents Bob and Pam Lygren.

Drawn in by their curiosity, the vacationing couple wandered over to him, unknowingly walking into one of the largest on-land seaweed farms in North America.

The man working on the farm is Chuck Toombs, and after a short conversation, he offered the couple a sample of the mystery crop.

“That’s pretty tasty,” Bob Lygren said after eating the brown algae snatched straight from the tank. “We’re going to call you the ‘Seaweed King of Oregon.’”

At first glance, the royal title may seem unfit. Toombs wears an old baseball cap in place of a crown; a simple plaid button down shirt and worn work jeans stand in as regal robes.

But, the otherwise unassuming Portlander is rich with knowledge when it comes to dulse, a special species of seaweed. He instigated the research that found that dulse, when fried in oil, tastes just like bacon. Now he tends to several tons of the aquatic plant. It grows in cold salt water tanks at the port, each with a constant bubbler to rotate the seaweed much like the tidal movements of the ocean.

He believes his on-land seaweed farm will revolutionize the industry for plant-based meat substitutes.

“Oregon will be known as the super premium growers of the finest red seaweed in the world,” Toombs said.

Where to try dulse seaweed

‘The pinot noir of seaweeds’

Toomb’s seaweed farm started as a class project for a marketing course he taught at Oregon State University. The longtime businessman has served on the Oregon State faculty since 2015. He first learned about dulse through the college’s Hatfield Marine Science Center, where researchers have grown and studied the seaweed in labs for nearly two decades.

But Toombs saw greater potential for dulse. The quick-growing seaweed is a “super food” for humans, he said.

Toombs said dulse has more nutrients than kale, and it provides natural proteins that most plants lack. He encouraged Oregon State food scientists to study the potential for human consumption, which led to the discovery that dulse could be prepared to taste like bacon.

At that point, Toombs realized he’d found the perfect product for a class project focused on building and marketing a new agrarian industry.

“Why can’t this be the new kale?” Toombs said, joking that dulse will become the “pinot noir of seaweeds” because Oregon farmers can corner the market before anyone else.

Toombs’ company, Oregon Seaweed, currently owns two dulse farms. One is in Bandon, with 10 tanks of product, and the other is in Garibaldi, with 20 tanks of product. The Garibaldi farm is large enough to produce roughly 20 tons of dulse per year. Toombs hopes to use the large supply for his next innovative business venture, marketing dulse protein as a new ingredient for plant-based meats.

The popularization of Beyond Burgers and other plant-based meat products during the coronavirus pandemic led Toombs and his Oregon State food scientist colleagues to research the potential of using dulse as an alternative for soy protein in those products.

Toombs believes dulse is a better option for generating the proteins in plant-based meats because the seaweed adds a natural salinity to the food. Unlike soy, no extra salt is needed to produce a tasty burger.

Toombs sells his dulse at the Cannon Beach Farmers Market and through the North Coast Food Trail’s Small Farm Markets Day program. He also markets his products to local restaurants, including the Salmonberry restaurant in Wheeler and Būsu in Astoria.

“It’s a local favorite, and it’ll expand all over the world,” Toombs said.

His goal is to begin selling dried and fresh dulse in Whole Foods Markets across the nation, and secure a contract with the Beyond Meat company to use dulse protein in the production of their plant-based meat products.

In the meantime, Toombs occasionally offers samples of fresh-from-the-farm dulse for curious visitors like the Sacramento couple who were lucky enough to catch the businessman on his once weekly visit to check on the tanks.