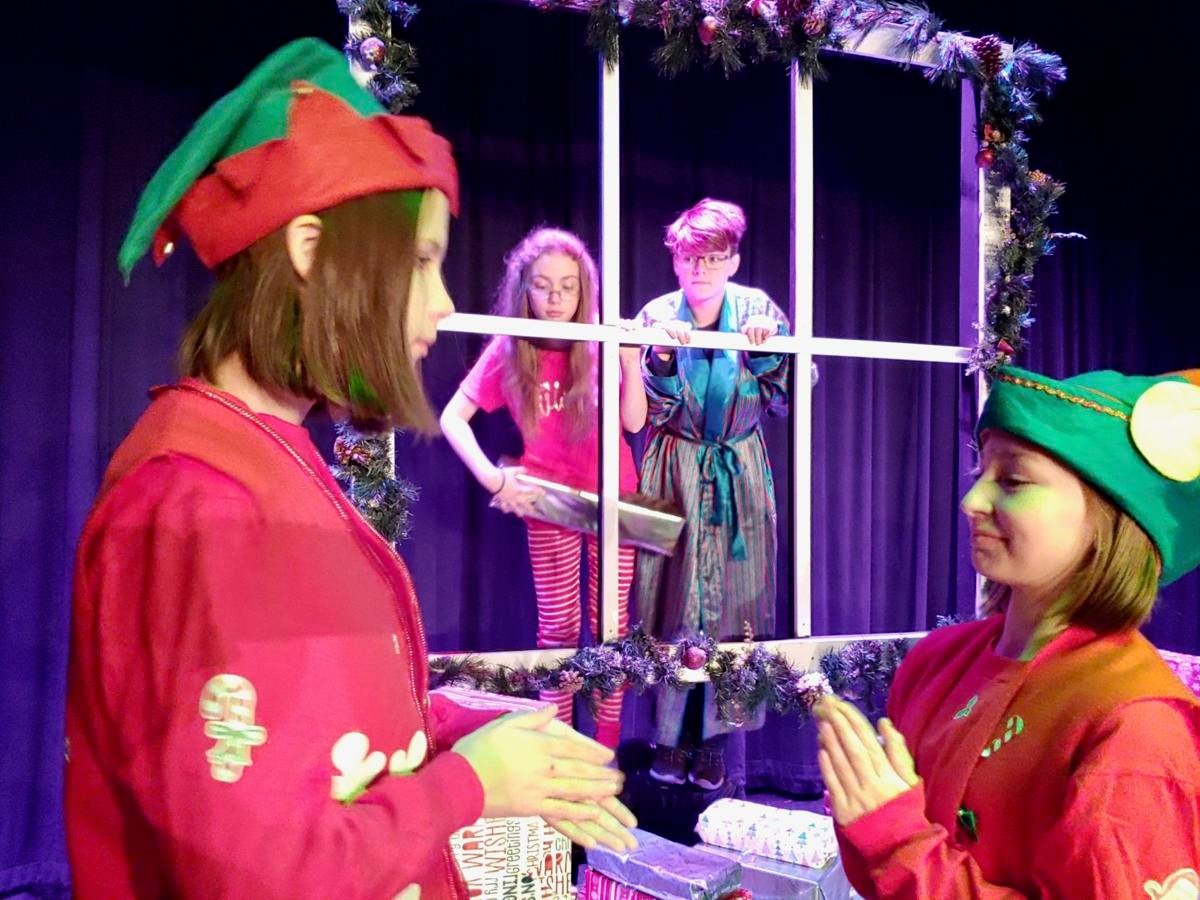 Elves Allison Klinzing and Vienna Gregoire discuss the magic of the holiday season, watched by two rather naughty girls, portrayed by Jayce Cunningham and Aubrey Coulombe. 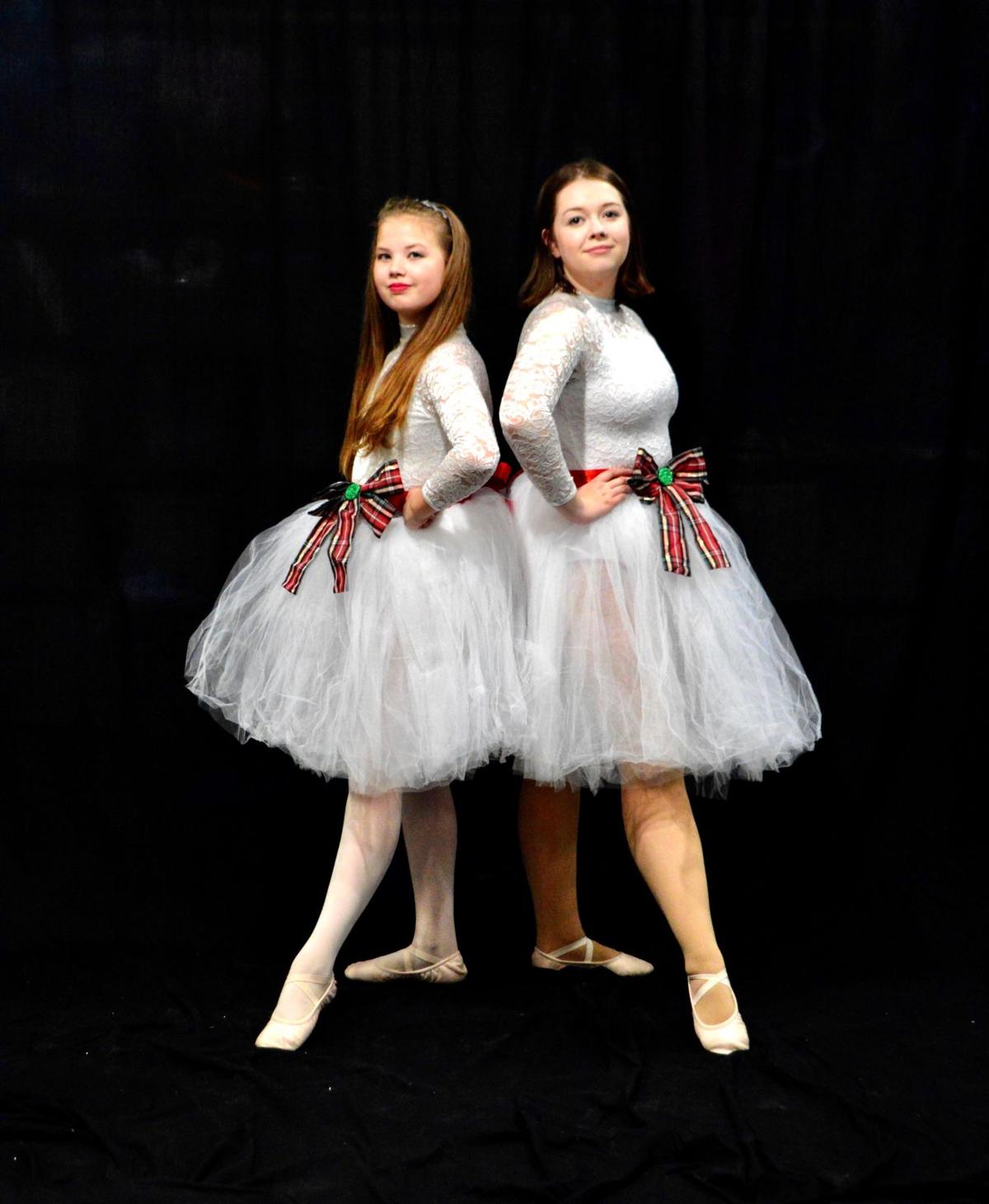 Dancers Lyla Inskeep and Zoey Huntley-Stern are studio class assistants from Beach Ballet in Long Beach, Washington, who will demonstrate their stage talents in several scenes of the musical, ‘The Polar Express.’

Elves Allison Klinzing and Vienna Gregoire discuss the magic of the holiday season, watched by two rather naughty girls, portrayed by Jayce Cunningham and Aubrey Coulombe.

Dancers Lyla Inskeep and Zoey Huntley-Stern are studio class assistants from Beach Ballet in Long Beach, Washington, who will demonstrate their stage talents in several scenes of the musical, ‘The Polar Express.’

“The reindeer were excited. They pranced and paced, ringing the silver sleigh bells that hung from their harnesses. It was a magical sound, like nothing I’d ever heard.” — Peter, character in “Polar Express.”

Cheryl Cochran invites all to climb aboard the holiday season.

She recruited 25 actors and 40 dancers for a production of “The Polar Express,” a modern story that takes a fresh look at the age-old message of Christmas.

Attendance is free, but theatergoers are asked to donate an unwrapped toy for a toy drive organized by the middle school students in the Hilltop Drama Club.

It is the second version of the show on the Long Beach Peninsula for Cochran, a special education teacher in the Ocean Beach School District who advises the middle school drama club. In January, she opened the Beach Ballet studio in Long Beach and the show features her dancers.

The story is based on the award-winning 1985 picture book created by artist Chris Van Allsburg. He has twice earned the Caldecott Medal, an award given since 1937 for the best American picture book for children. His other winner was the earlier “Jumanji,” which became a movie. The writer also worked with Disney on the original “Little Mermaid” film.

“The Polar Express” was made into a movie in 2004 with Tom Hanks playing seven characters, including the conductor. That lead role is played in the Ilwaco production by Hayden Gentry. The seventh-grader is a veteran of last year’s version and has appeared in other shows with Cochran, including “Peter Pan” and “Peter and the Wolf.”

“He’s a fun person to play,” Gentry said. “He’s organizing everything and making sure everyone gets to the North Pole. I played it last year. But this year it’s different — people playing different characters, and a couple of lines that have been moved.”

The Polar Express is a train that takes a group of pajama-clad children to Santa’s grotto to discover some seasonal magic amid reindeer and elves.

Cochran said she likes the musical as an alternative to the more familiar “Nutcracker” or other traditional winter tales.

“It’s all about the spirit of Christmas — and keeping that spirit alive,” she said.

“A little boy is not believing in Christmas because his friends say there is no Santa Claus. On a train to the North Pole, Peter, the boy, meets some snotty girls who need to learn to be humble and a boy from the wrong side of the tracks.”

Sixth grader Aliyanna Hudson, who appeared last year, said she enjoys being in the show again. She portrays Becky, one of the girls who befriends Peter and his skeptical friend Billy. “She is one of the children who make Peter and Billy learn that Christmas is amazing,” she said.

When the youngsters disembark at the North Pole, Santa offers Peter first choice of any gift. The boy chooses a bell, which elves remove from his reindeer-pulled sleigh. But drama occurs when he arrives back home to discover his precious bell has fallen through a hole in his pocket.

The cast is aged 3 to adult. Peter is played by seventh-grader Julian Frazer; three other students, Aarin Hoygaard, Jayce Cunningham and Aubrey Coulombe, have significant roles.

“The music is really cool and by now just about everyone is familiar with the story line,” said Cochran. “We are really excited. We have a really enthusiastic cast. The kids sit with their friends practicing their lines at lunch time.”

Its wider message resonates, too. “Not everybody has everything they want for Christmas,” she said. “Kids are having different types of feelings about the holidays.”

John Weldon appears as Santa. After a 25-year career in the U.S. Air Force, Weldon works as a substitute teacher and lifeguard. His previous experience as the character was underwater — as Scuba Santa at the Point Defiance Zoo and Aquarium in Tacoma, Washington.

Last year, he enjoyed watching his daughter, Pepper Weldon, dance in “Polar Express,” and this past summer he portrayed the shady businessman Von Hussler in “Mary Poppins” with the Peninsula Association of Performing Artists in Chinook, Washington.

“I had such a good time with that. It was a real eye-opener,” he said. “Some of the young cast were in their fourth or fifth shows and I learned much more from them than they did from me. They passed on tips.”

So this fall, when 7-year-old Pepper wanted to dance again, he stepped up, too. Santa’s white beard was rather itchy at first, and extra padding was needed to fill the character’s bright red costume, Weldon said.

“The moment I tried on the suit you could see the glow in all the girls’ eyes,” he said. “You become part of the holiday spirit and it puts a good perspective on everything.”

'It’s all about the spirit of Christmas — and keeping that spirit alive' — Cheryl Cochran,