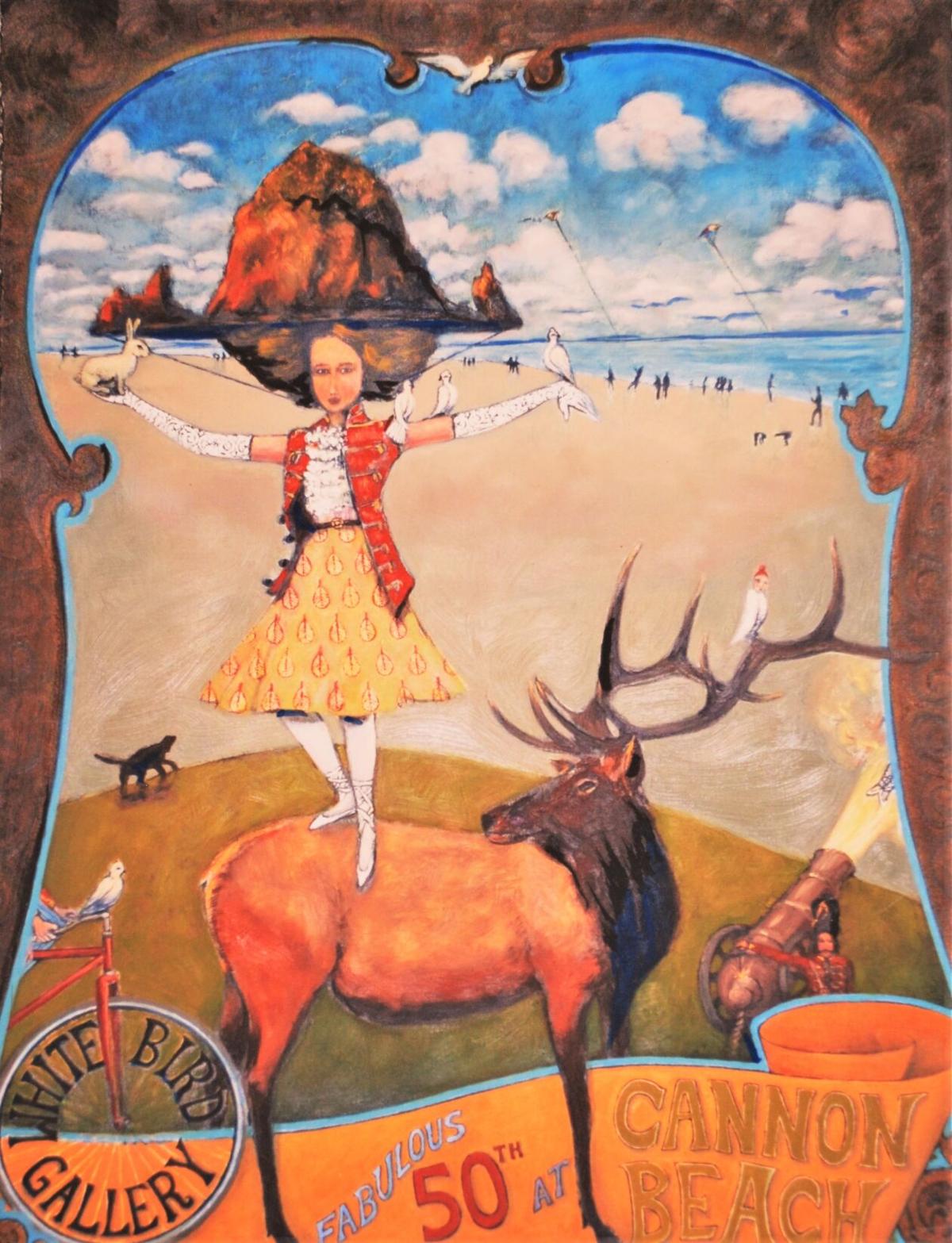 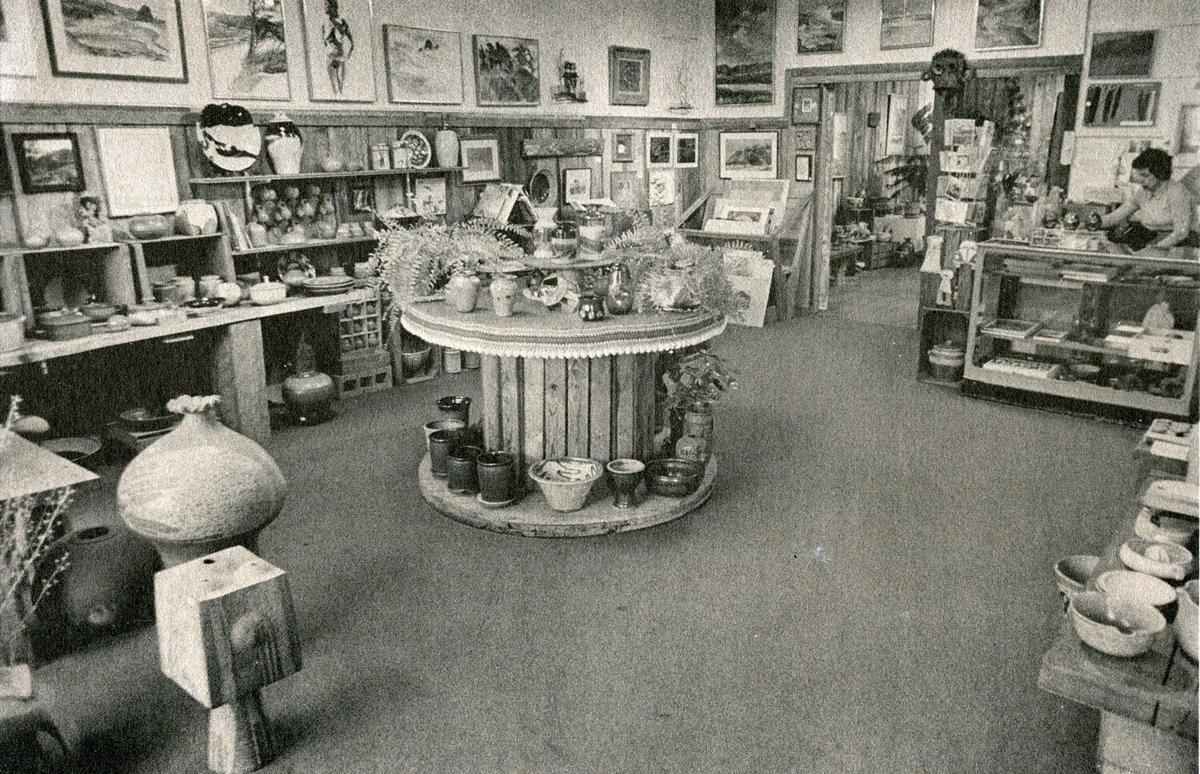 Opened in 1971, the White Bird Gallery was among the first galleries in Oregon to combine fine art with arts and crafts. 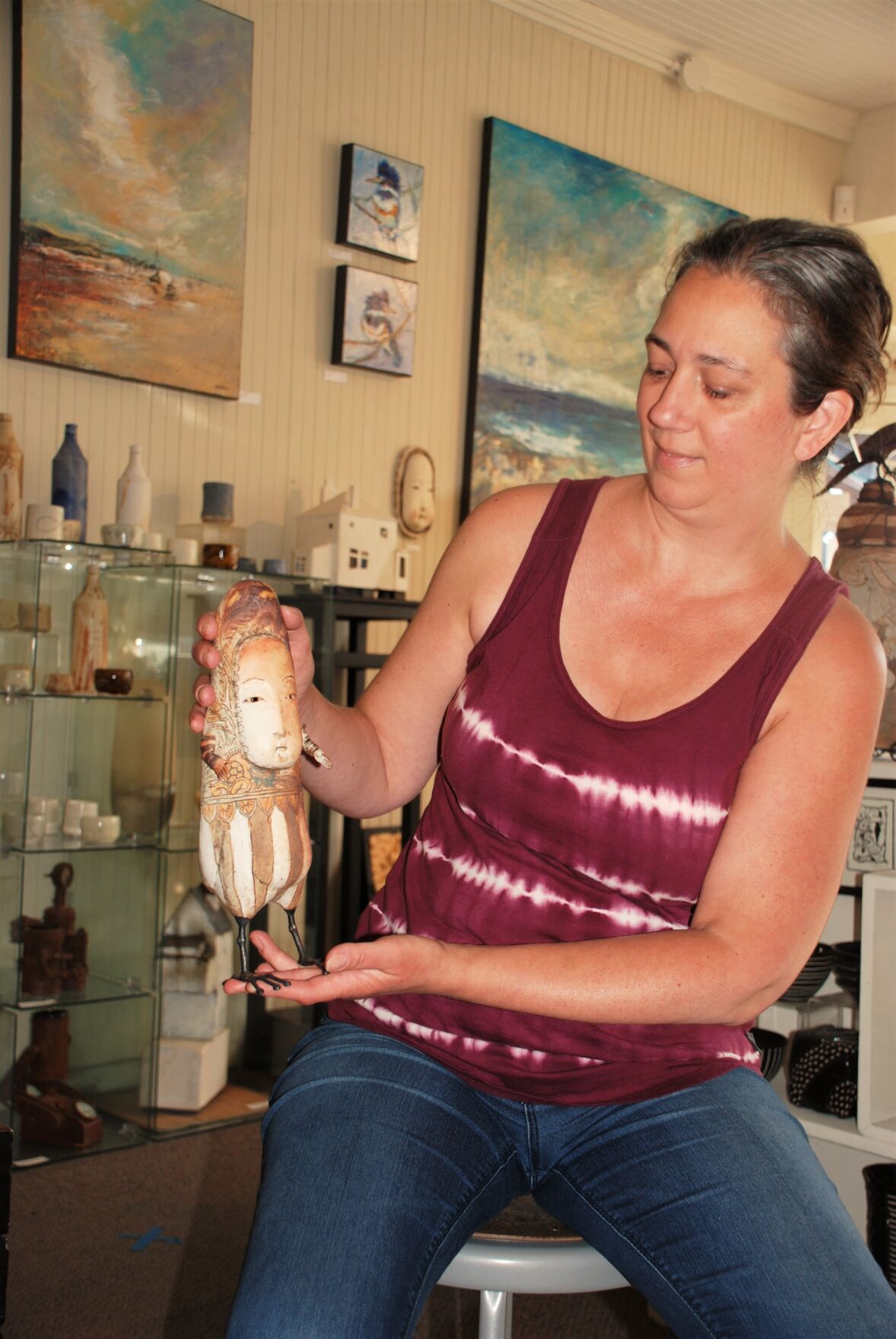 Among the newer artists featured at White Bird Gallery are John and Robin Gumaelius, who together create whimsical ceramic figurines, including the one held by gallery owner Allyn Cantor. 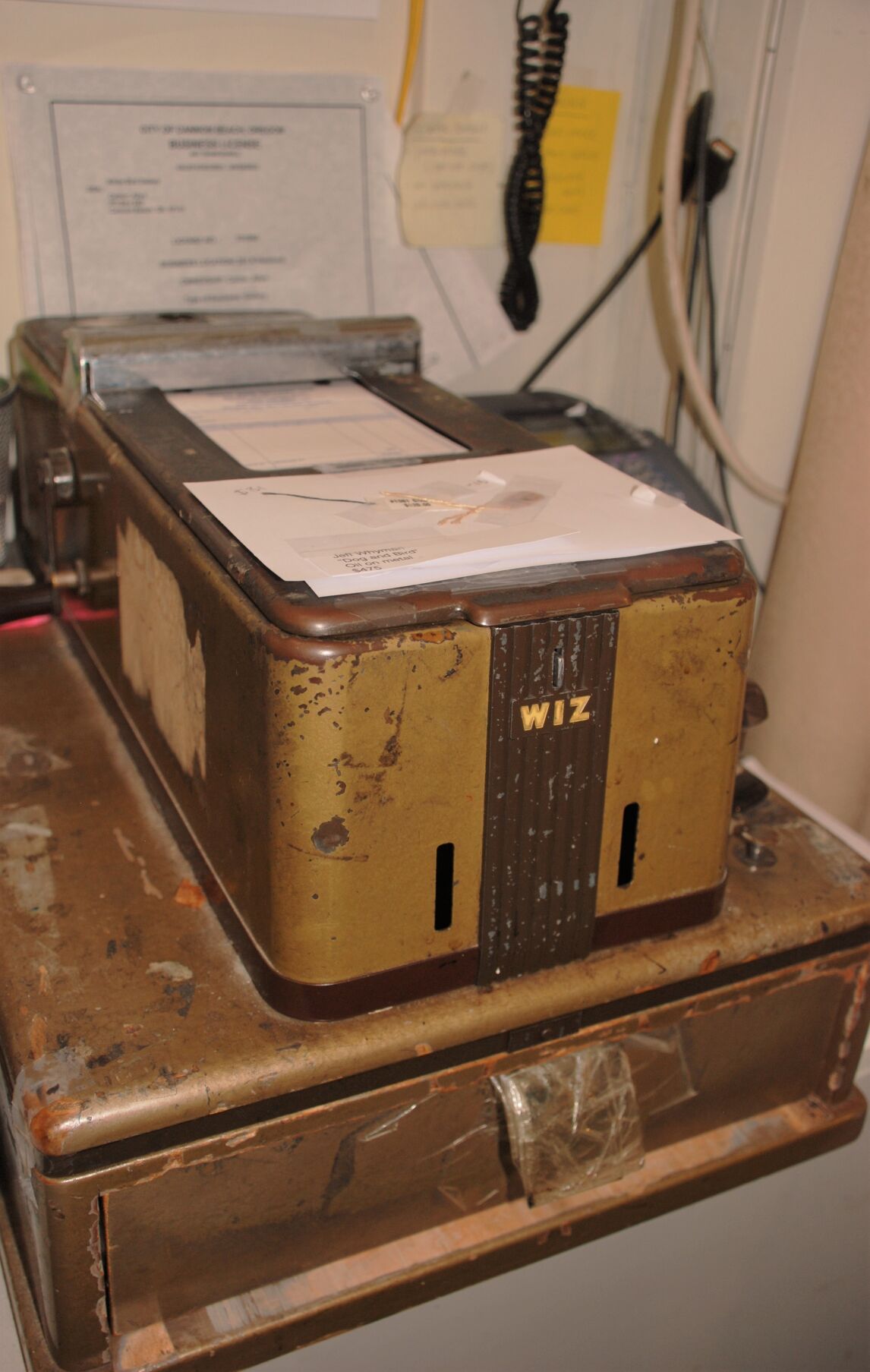 Not only is the White Bird Gallery in the same location after 50 years, the register used when Evelyn Georges first opened the gallery is still there.

During the village’s early days as an artists colony, many created their own “pop up” galleries to sell their works and closed almost as quickly. The White Bird was the first to establish itself as a gallery, a fixture in the community displaying a variety of artists’ paintings as well as crafts since 1971.

As the milestone birthday grew close, gallery owner Allyn Cantor rummaged through the archives and discovered posters from past anniversaries.

A few posters include the iconic white birds, that commemorate the gallery. Original owner Evelyn Georges named the space after the 1969 song, “White Bird,” by the band It’s a Beautiful Day.

In a golden cage

Or she will die.”

“(Evelyn) was a potter back then, and I think she thought this would be a good summer project,” Cantor said.

But it became more than just a project. Several of the artists who first showed there went on to be known nationally; they included painter Henk Pander, illustrator Petra Mathers and multimedia artist Royal Nebeker.

“Evelyn gave a lot of emerging artists a good shot,” Cantor said. “She had a group of friends wealthy enough to buy art. She would bring them out here and have parties at her house and get them to come into the gallery.”

In a 2010 interview with The Daily Astorian, Georges said she had a “knack for picking artists who connect with people visiting Cannon Beach.”

She tried to mix affordable pieces from emerging artists with more expensive works from known artists.

“I like the way art captures what is happening in the world,” Georges said. “I like all kinds of art, from abstract to figurative, from sculpture to jewelry. That is what the White Bird has been all about.”

Evelyn Georges continued working at the gallery until her retirement in 2010. She died in 2014.

By the time Allyn Cantor took over the gallery in 2011, she had already been working there for ten years.

“It has been in the same location for 50 years; it hasn’t moved,” Cantor said.

Even the original cash register, called the “Wiz,” is still used every day.

The gallery will commemorate its 50th anniversary with a summer celebration of rotating artworks in a salon-style hanging through Sept. 6.

Housed in a building constructed in 1915, the gallery was once a grocery and butcher shop. Reminders of the past echo today. The “cold room,” where they stored the meat, still stands in the gallery, as well as a shelf that once held the town’s first library books. The space above the shop was once a boarding house for loggers. It’s now home to a yoga studio.

Local potter Barbara Temple Ayres, who managed the gallery from 1972 to 1974, called the gallery instrumental in making Cannon Beach the arts colony it is now.

“Evelyn kept the standards very high and attracted influential art buyers,” Ayres added. “It has maintained these standards over 50 years and helps to support local and up and coming artists.”

Cantor has expanded the gallery to include the work of local painters, sculptors, jewelry makers and basket weavers. She wants to continue Georges’ pursuit of emerging artists who are trying their wings with contemporary pieces that resonate with the next generation looking for affordable treasures.

This year’s anniversary poster, created by Robin and John Gumaelius, captures the gallery and its place in Cannon Beach.

Against a backdrop of blue sky and clouds stands Haystack Rock. In the foreground, a young woman balances on an elk while holding a rabbit in one hand and a white bird in the other. Below her, a cannon fires, and the words “White Bird Gallery” are framed in the spokes of a bicycle wheel. A banner at the bottom declares, “Fabulous 50th at Cannon Beach.”

My grandma Pat Snellman was a well known partner of Evelyn’s. It’s surprising and disappointing the writer didn’t mention her in this article. I would say lack of research, but I noticed she wrote about Pat when she passed away and mentioned the white bird. So it’s very unclear why she was forgotten.