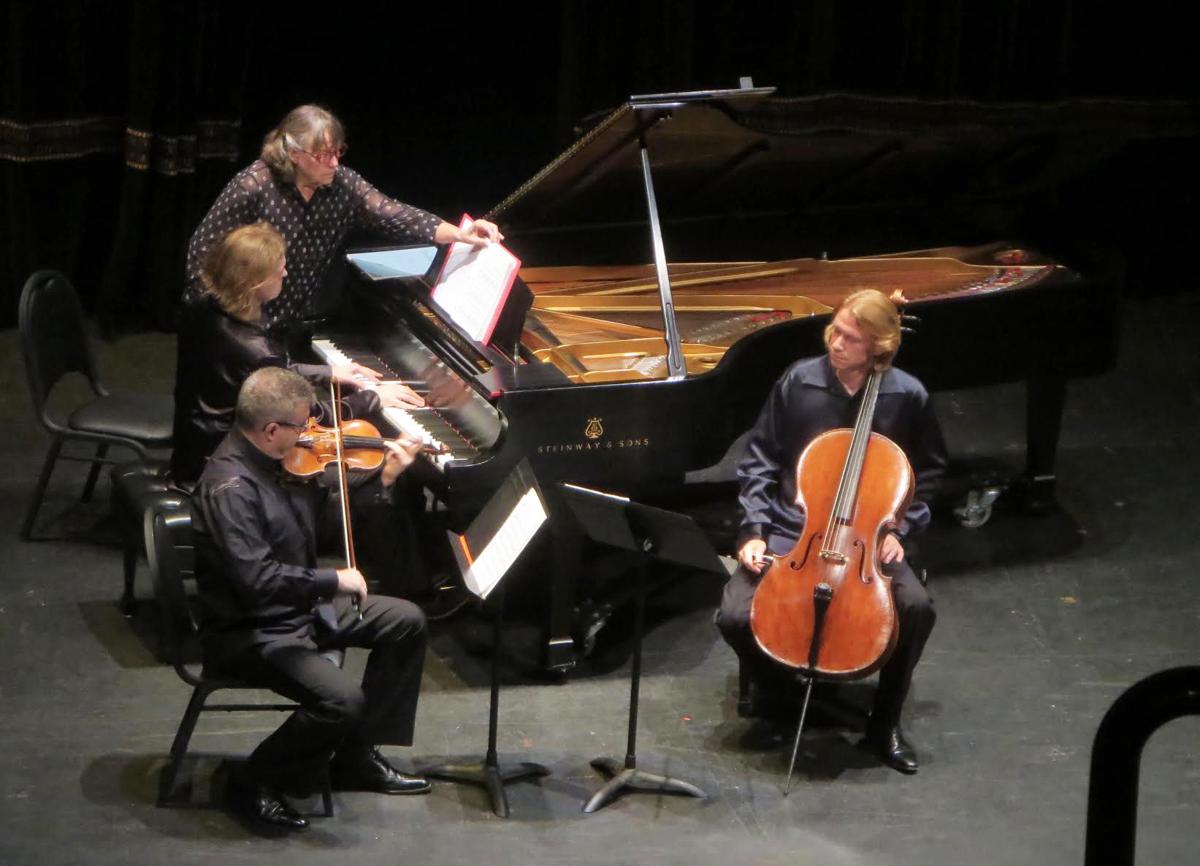 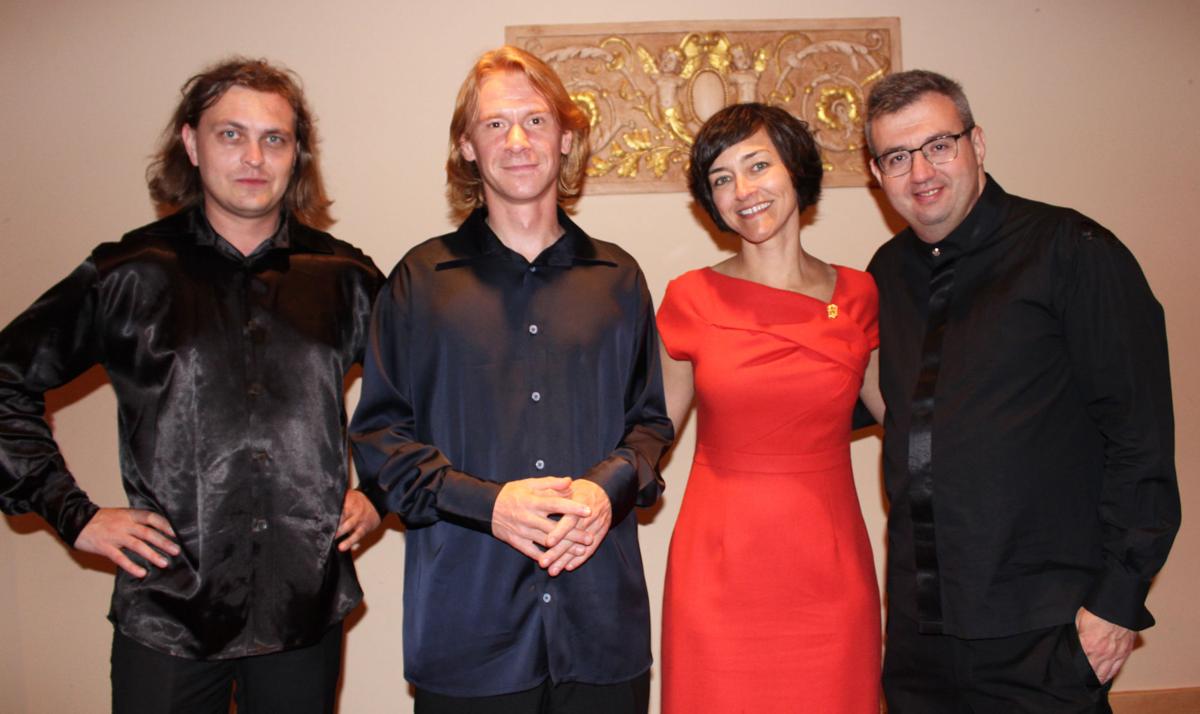 Pianist Ilya Kazantsev, cellist Sergey Antonov, Liberty Theatre Executive Director Jennifer Crockett and violinist Misha Keylin are all smiles after the Hermitage Trio concert in Astoria Saturday night. As well as the debut of their new CD featuring the music of Rachmaninoff, Keylin was trying out a “new” violin, crafted in Naples, Italy, in 1775 by Josef Gagliano.

Pianist Ilya Kazantsev, cellist Sergey Antonov, Liberty Theatre Executive Director Jennifer Crockett and violinist Misha Keylin are all smiles after the Hermitage Trio concert in Astoria Saturday night. As well as the debut of their new CD featuring the music of Rachmaninoff, Keylin was trying out a “new” violin, crafted in Naples, Italy, in 1775 by Josef Gagliano.

There’s an old joke about the violinist who asks a New York cop, “How do you get to Carnegie Hall?”

That came to mind during an audience questions session with the Hermitage Trio at the Liberty Theatre Saturday.

“We are all high-level musicians,” said Keylin, a violinist who met Antonov in 2011 then united with pianist Ilya Kazantsev, Antonov’s childhood friend, a few years later.

“I never realized chamber music could be so entertaining. I never wanted to join a string quartet — that’s a change of profession!” he quipped.

“We do practice as a group, which is the other thing that makes our trio work. We don’t get together on the day of,” Keylin added.

Proof was evident in a concert that featured three intense pieces (and a familiar light Brahms encore) that had the Liberty crowd on its feet.

The concert, part of the Liberty’ annual Classical Series, launched the trio’s first CD, a tribute to Rachmaninoff and featured as its showcase the “Trio Elegiaque” No. 2.

It began with a piano trio by Horatio Parker, an American classical composer from Rachmaninoff’s era. Antonov lamented his group’s recording advisers have so far rejected the idea of producing a CD of American classical music, but it will feature in their concert repertoire.

Parker’s creation demonstrated their unity as they swung effortlessly from the somber to the jaunty, then savored its blustery finale.

Next was Dvorak, whose delight at immortalizing Bohemian folk tunes redirected classical traditions into the modern era. His Piano Trio No. 4, called “Dumky” (a Czech ballad), hasn’t the familiarity of his America-inspired “New World” masterpiece or the cello concerto that is among Antonov’s solo favorites. But it offered a satisfying journey through reflective phases from sinister to triumphant. Antonov urged listeners to listen for the winter wind in the finale, and, sure enough, as his left hand fluttered on the neck of his instrument in his characteristic style, the notes suggested snow on the steppes.

Afterward Keylin, expanded on why the trio works.

“I think it starts with strings,” he said. “Sergey and I never had to discuss what we planned to accomplish. It was an immediate match. You can improve a mismatch, but you can’t solve it."

“Then we add piano music," Keylin said. "With Ilya, he is very much a collaborator as a musician, but he has that extra gear when he can dominate."

“I think what makes us work is we respect each other’s role and not try to ‘over play.’ We play with one voice,” Keylin said.

That was evident in the showcase piece from their CD, which features three works by Rachmaninoff. The composer was just 20 in 1893 when he began writing his haunting “Elegiaque.” “This music is very personal to Rachmaninoff because he started to write this piece on the day Tchaikovsky died,” Keylin said. “He was like a god to him. You can hear the sorrow.”

At the keyboard, Kazantsev’s intensity was palpable. At times delicate, then somber, even funereal, he powered his team through Rachmaninoff’s musical grief for his lost hero.

If it is possible to bruise a Steinway, Kazantsev did.

The strings completed the alchemy. Sometimes alternating, other times mirroring each other aided by rare eye contact, they teased the pain from the score, blending with Kazantsev’s dolefulness, making the finale “swift and resolute” as the movement’s title instructs.

And when they concluded, there was a moment of reverent silence with bows raised in tribute, which all 245 present respected.

Is it fanciful to suggest that only musicians with Russian blood flowing through their veins can honestly harness the melodious spirit of their countrymen’s suffering?

Perhaps. But likely no one who emerged late onto the dark Astoria streets would disagree that the gift these three men in black unwrapped was out of this world.

Patrick Webb is the retired managing editor of The Astorian.