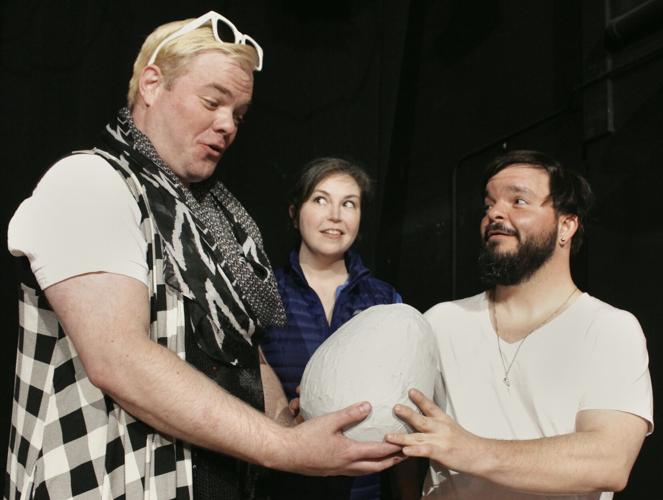 Watched by a zookeeper, center, played by Cameron Lira, two male penguins, portrayed by Richard Bowman, left, and Preston C. Roper, are given an egg and some encouragement. 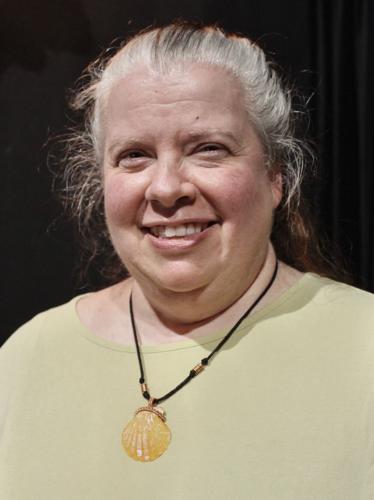 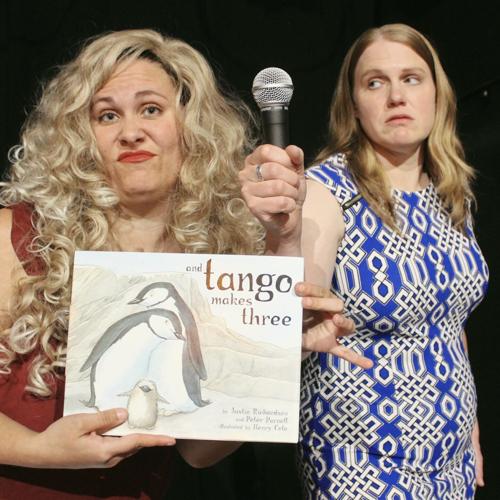 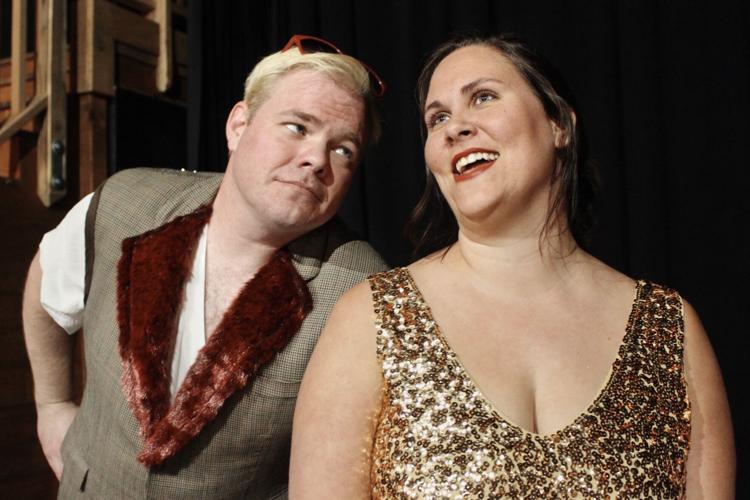 The mating rituals of red tailed hawks are under scrutiny in ‘Birds of a Feather.’ Richard Bowman, left, as the macho Pale Male, swoops in on Lola, played by Katherine Lacaze.

Gay penguins continue to make headlines, from a charming story about a couple of penguins at the Central Park Zoo adopting a chick to a book that many have sought to ban. Now, there is a play about them.

“Birds of a Feather” is the latest performance to be staged by Astoria’s Ten Fifteen Productions. With a cast of six that plays 25 parts, the performance will be directed by Ann Bronson, a longtime actor and singer on the North Coast.

Bronson’s directorial debut, “A Bench in the Sun,” was staged at the Coaster Theatre Playhouse in Cannon Beach in February 2020, just before the pandemic shut down local performances.

“I had fallen in love with the play and I came to the realization that if this show was going to come to the North Coast I was the one to bring it,” Branson said.

She’s excited for the project, but acknowledged a learning curve in her transition to directing. “It is still new territory,” she said.

“Birds of a Feather” was written just over a decade ago by Marc Acito, a former opera singer and writer of gay humor, who has strong ties to Portland. His work includes the libretto for “Allegiance,” a musical about World War II era Japanese American internment camps which drew on actor George Takei’s childhood.

The play features penguins and hawks, and plots inspired by true stories. Two male chinstrap penguins at New York’s Central Park Zoo made news headlines when they hatched a stray egg and raised a chick together.

A subsequent children’s book about them, “And Tango Makes Three,” by Peter Parnell and Justin Richardson, was hailed by professionals as an appropriate way to introduce grade schoolers to the concept of LGBTQ families, but was soon banned by schools and libraries across the United States.

The hawks, nested in a ritzy Manhattan residential building, delight New Yorkers with hope after the events of Sept. 11, 2001, but infuriate wealthy Fifth Avenue property owners who try to drive them out.

Actor Richard Bowman, another veteran of the North Coast theater scene, portrays the more nurturing of the penguin dads and a hawk who epitomizes toxic masculinity. “Roy is a sweet, lovable male who is quite content in his skin and finds that the attention people give him suits him well,” Bowman said. “On the other end of the spectrum is Pale Male, the ego maniac red-tailed hawk.”

Amid the humor, Bowman savors the play’s message. “The story is about a lot of different things, but at the end of the day it’s about love,” he said. “There is a lot of comedy throughout the play and a lot that makes the actors, and hopefully the audience, ask themselves the tough questions about love and relationships.”

Brittania Williams portrays Paula Zahn, a television journalist, while Darren Hull appears as her property developer husband Richard Cohen. Preston C. Roper is Silo, the other penguin dad, while Katherine Lacaze plays Lola, the other hawk, and Cameron Lira appears as a zookeeper.

To assist Bronson, the troupe recruited Olivia Johnston, who has significant experience with theater in Long Beach, Washington, as stage manager as well as Mick Alderman, a professional set and lighting designer. Gad Perez was given the challenge of creating the costumes, which may not appear as one might imagine. “People are not wearing penguin suits and hawk costumes,” Bronson said. A set of stage directions read that “Roy is black and white and appears fastidiously dressed, but he is, in fact, a penguin.”

Bronson wishes that audiences could read Acito’s stage directions, because they are as funny as the dialogue. One describes Roy as, “a penguin that you would like to have a beer with.” Another labels one of Lacaze’s additional characters, a book ban campaigner, as “a helicopter mom with extremely sharp blades.”

“It’s a very funny play and there are some heart-rending parts of it,” Bronson said. “It ends hopefully, so I hope that people will take away that where there’s love there’s hope — and love can take a lot of different forms, not just romantic love, but parent and child, and between best friends.”

'Birds of a Feather'

Admission for each performance is $20. Masks optional, proof of COVID vaccination required for all attendees