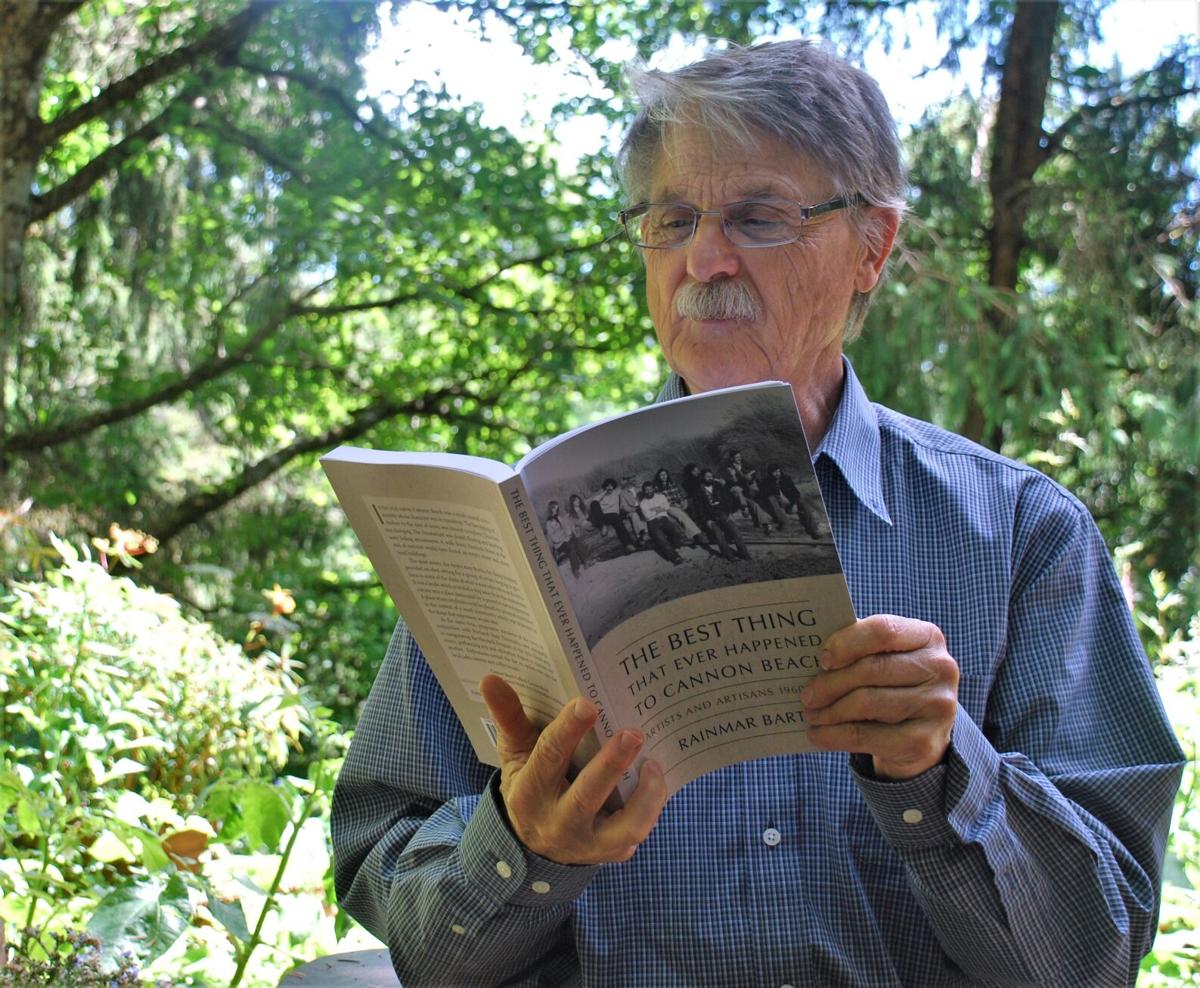 Rainmar Bartl looks at his book ‘The Best Thing That Ever Happened to Cannon Beach.’ 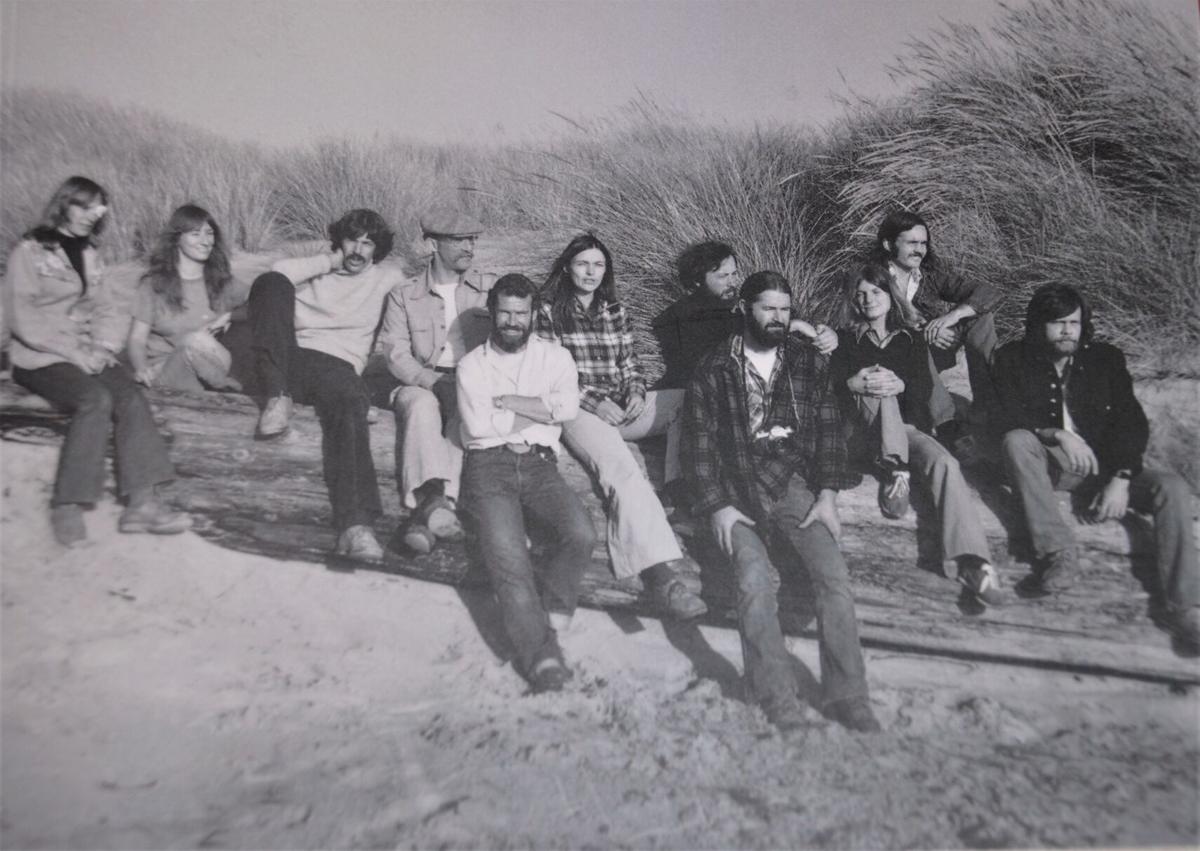 A 1978 photo features a group of Cannon Beach artists at a moment author Rainmar Bartl describes as ‘when the arts in Cannon Beach were at their fullest expression.’ 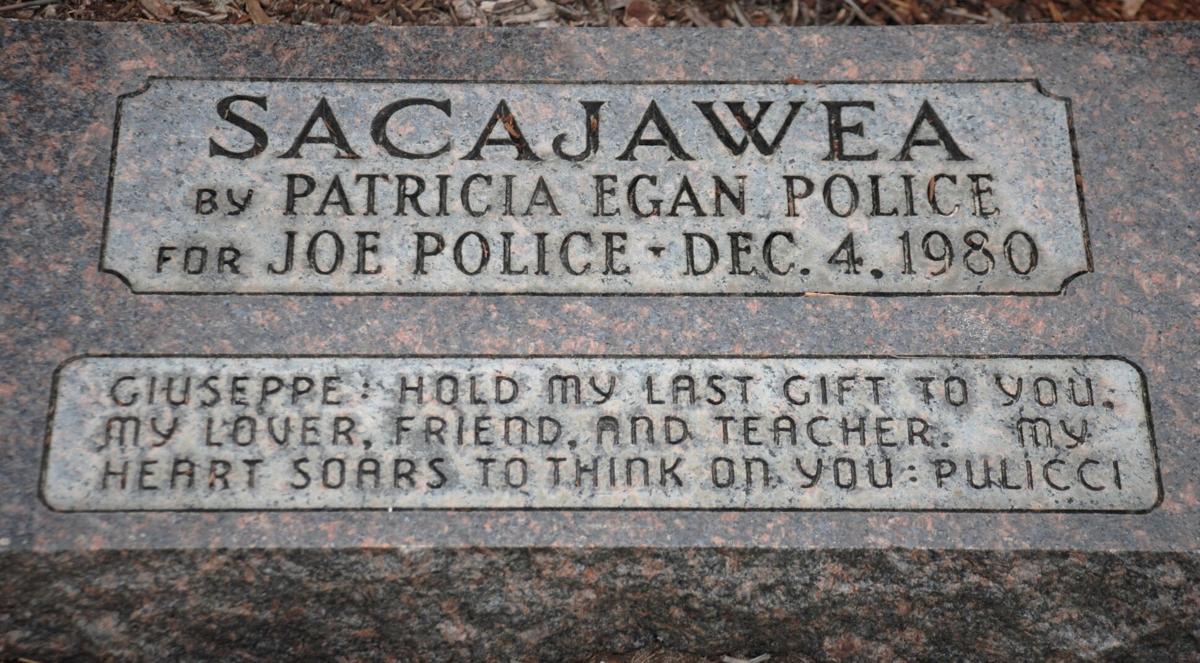 A plaque at the bottom of a life-sized wire sculpture pays tribute to artist Joe Police, who was commissioned to create the piece. 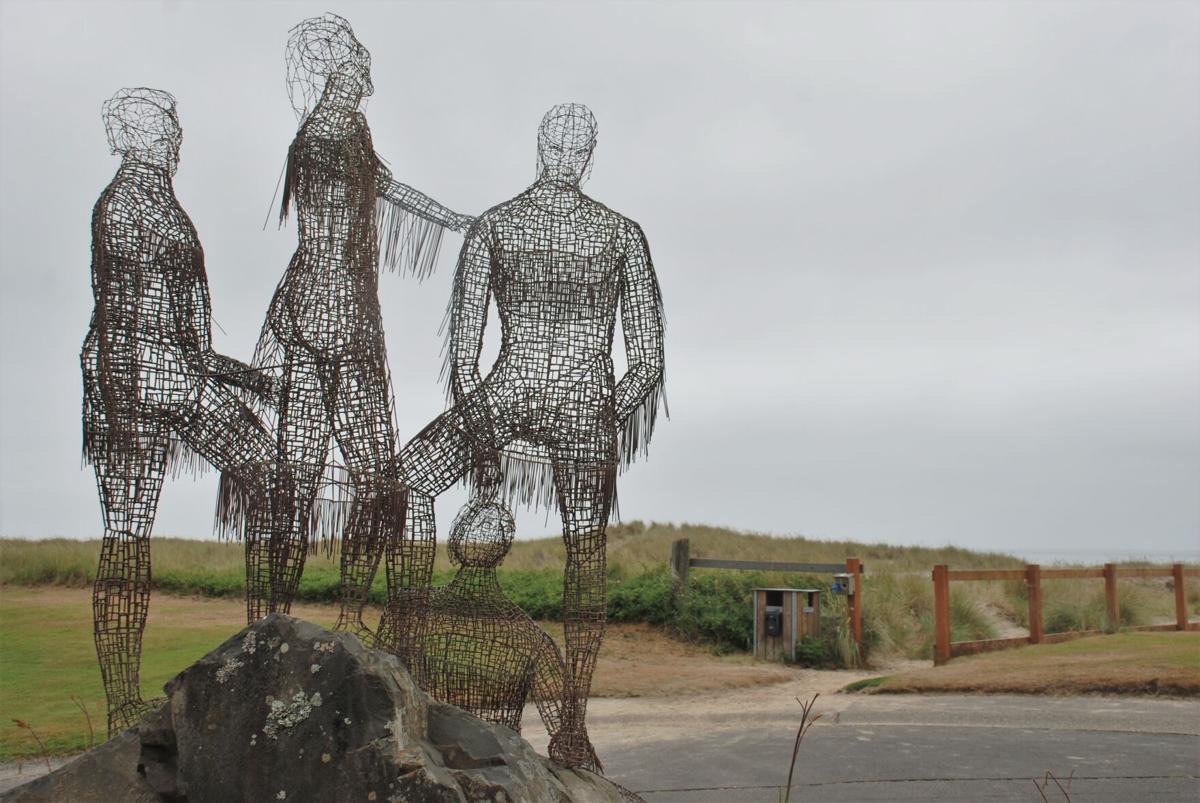 Metal and wire sculptor Joe Police was commissioned to create a wire sculpture at Breakers Point. Police died before he could begin the sculpture so his wife, Pat Egan Police, completed it with help from fellow artists. 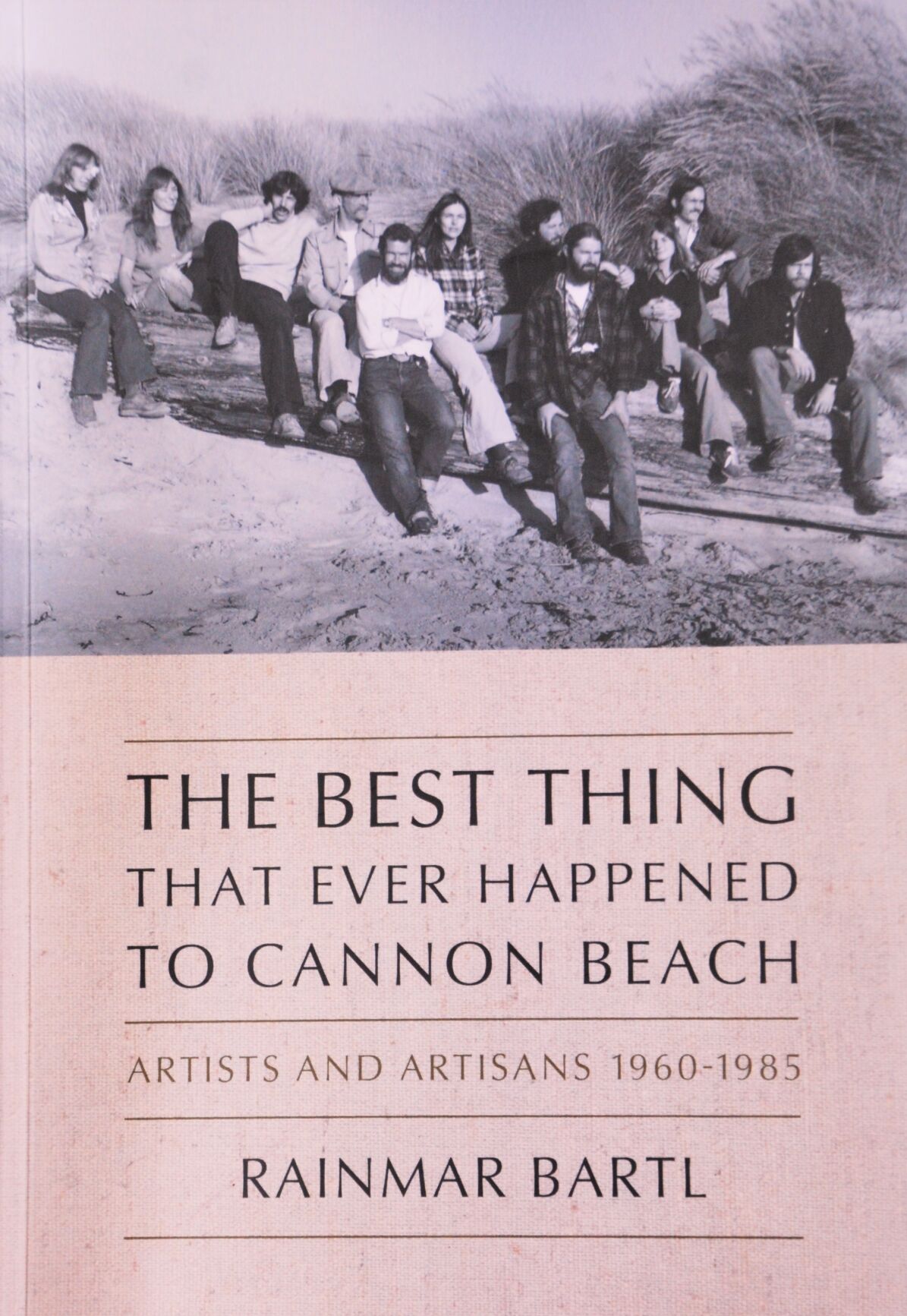 The front cover of ‘The Best Thing That Ever Happened to Cannon Beach’ by Rainmar Bartl.

With its fabled scenery, Cannon Beach has always attracted artists. But when hippies began showing up with canvases, crafts and cameras in the 1960s, residents worried they would ruin the town.

“In the late ‘60s, early ‘70s, it was a time of culture clash. Cannon Beach at that time was very conservative,” said Rainmar Bartl, whose new book, “The Best Thing That Ever Happened to Cannon Beach,” chronicles the era between 1960 and 1985 when Cannon Beach was a true artists’ colony. “The city fathers in those days were freaked out by all of these young hippies coming to town.”

Despite residents’ fears, however, the arts focus became what then-Mayor Gerald Gower called the “most wonderful thing that ever happened to Cannon Beach.”

Bartl, a retired city planner who moved to Cannon Beach in the 1970s and observed the village’s evolution as a close-knit artistic community, tried to capture that history before it was too late.

“It was a special time in Cannon Beach; I thought there should be a record of it,” Bartl said. “Some of our friends started getting sick and dying, and I thought, ‘Now’s the time.’”

The book consists of short biographies and photos of 111 artists who spent time in Cannon Beach. It also describes 61 galleries and studios — ranging from a gas station annex to the White Bird Gallery, which celebrates its 50th anniversary this year. Colored plates of some artists’ works are included as well.

In addition to interviewing artists, Bartl perused 25 years of local newspapers, including the Cannon Beach Gazette and Seaside Signal. Bartl included stories about artists and their exhibits in the book.

The reasons artists descended on the town are as diverse as the artists themselves. Painter and sculptor Jane Horns, a Portland Museum Art School student, visited the area on a field trip in 1964. Horns was stranded when the school bus left without her — so she found a $25 room in Cannon Beach.

She spent the summer exhibiting her work in the M&M Building, home to numerous art galleries through the years. The building now houses the Sesame and Lilies store.

Painter Steve McLeod rode his motorcycle to Cannon Beach during a cross-country tour in 1970 and became one of Cannon Beach’s beloved residents until his death in 2015.

Frank Lackaff visited his family’s cabin in 1960 and eventually opened the Sketch Pad Gallery at a gas station. He later renovated a building on Hemlock Street into a home and gallery, and sold that to artists Harry and Hanne Greaver, who still operate the gallery.

Jim Hannen decided to open a stained glass studio in 1975 in Cannon Beach after a visit. In those days, an artist could rent a place large enough to live and work in for $50 a month.

“I thought what a cool thing it would be to live in Cannon Beach and have a shop in Cannon Beach,” said Hannen, who still lives in the area and sells his glasswork. “It was such a different town. There was something kind of dreamy about it.”

Bartl also tells the story of Joe Police, a metal sculptor who became Cannon Beach’s mayor. Police was commissioned to do a sculpture of Sacajawea at the then-new Breakers Point condominium development. Police died in 1980 before he started the sculpture. His wife, Pat Egan Police, completed it with the community’s help.

“There was a lot of creative energy,” Bartl said. “There were a lot of reasonably young people starting out their lives and careers, and they had ideas. They were different from 1950s, early ‘60s mainstream ideas, and it created something. It wasn’t just in the arts. There was a revolution in what kind of town we should be and how we get there.”

When Portland State University opened the Haystack Summer Arts Program in 1969, Cannon Beach became an even greater draw for artists and visitors from throughout the U.S. The program, which continued for more than 30 years, impacted the village economically and culturally.

But those early days were special, Bartl said, because the arts were “woven into the community.”

“That was the best time in Cannon Beach, there’s no doubt about it. I think it was a special time, I really do,” he said.

Where to purchase the book

Thank you so much for sharing this helpful information

thank you for sharing with us mx player