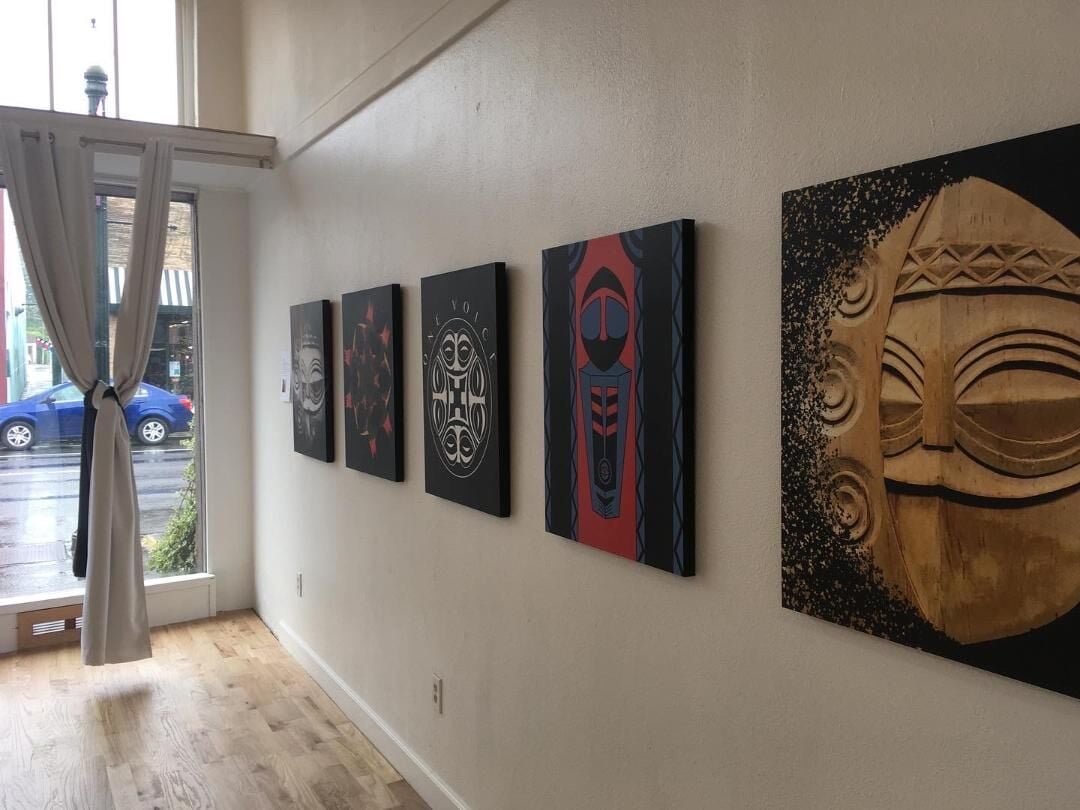 Art hangs along a wall in the exhibit. 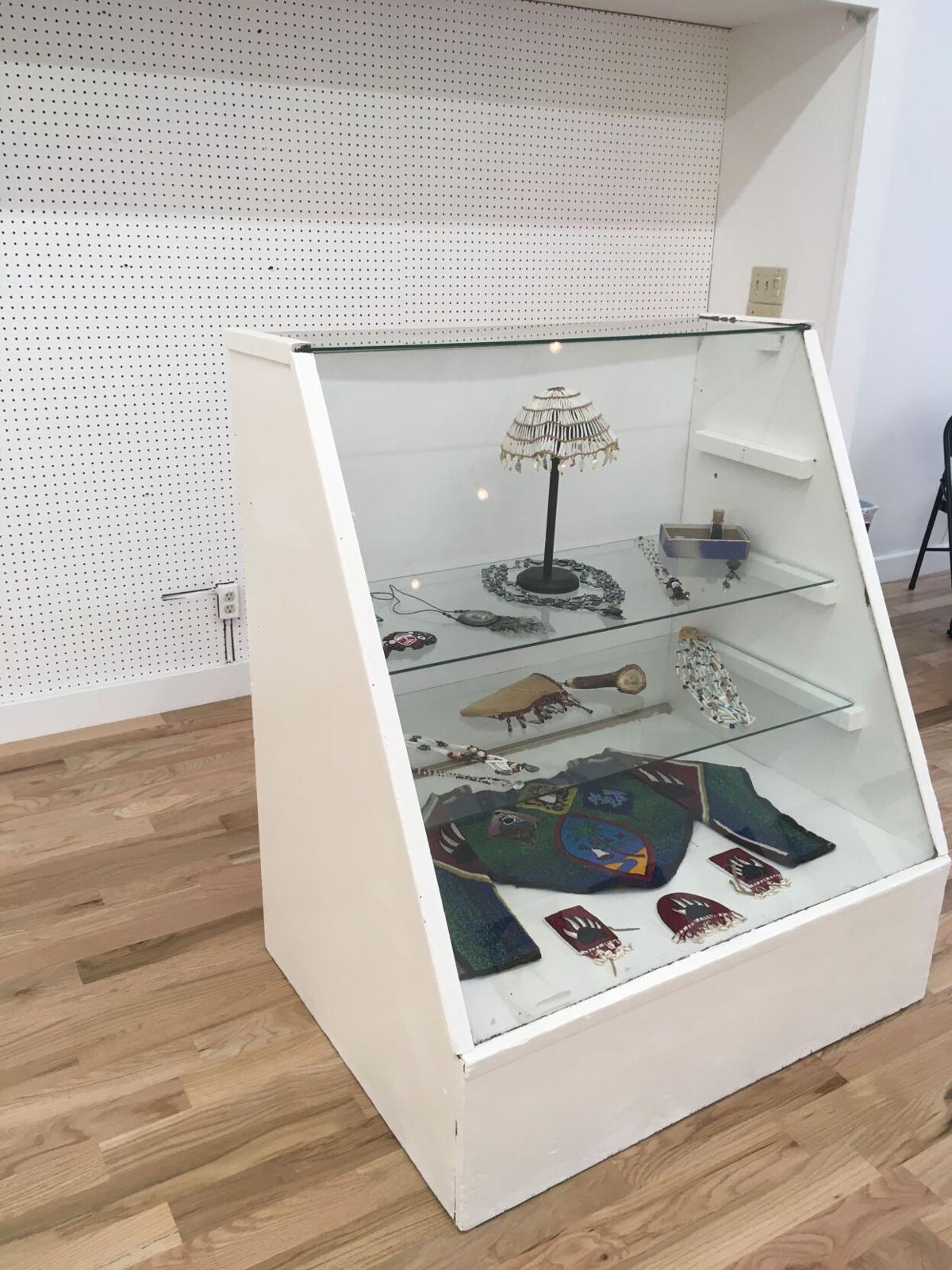 A display inside the exhibit. 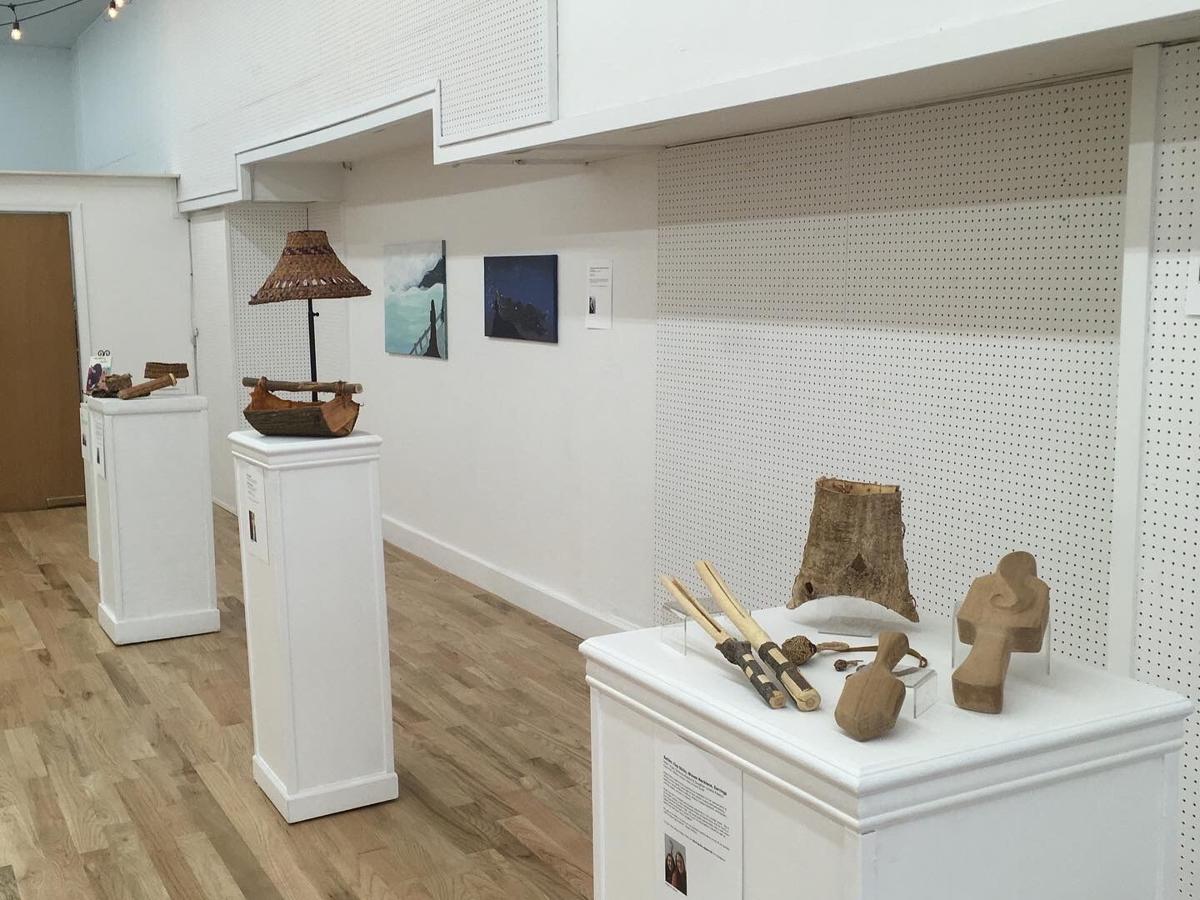 Items featured in the exhibit.

The voices and perspectives of Indigenous people, often underrepresented or excluded in the fine arts world, have been given a platform via a new exhibition in Astoria.

“The opportunity to literally be visible for an Indigenous artist is so big,” said curator Steph Littlebird. “It’s transformative in so many ways.”

The Pℎot-Choch exhibition, which opened June 12 at the historic Anita Building, will run through the summer. The show features a vast array of work by local artists.

Showcased pieces include traditional and contemporary art, including weaving, carving, beadwork, painting and photography. The exhibition honors members of the Chinook Indian Nation who identify the Columbia-Pacific region as their ancestral homeland. It includes the work of roughly a dozen Indigenous artists, most of whom are local.

Pℎot-Choch is the Chinook word for Fort George, a name applied by French-Canadian settlers. While this area is commonly known now as Astoria, it was originally Clatsop Chinook territory. According to Littlebird, the title for this show was chosen with guidance from Tony Johnson, chairman of the Chinook Indian Nation.

Funding for the Pℎot-Choch exhibition came from a Precipice Grant. Liz Harris, owner of the gallery space, and Patricia Vázquez Gómez, a curator and artist in Portland, applied for the grant and selected Littlebird to curate the collection.

They were familiar with Littlebird’s previous curatorial work with Five Oak Museum’s “This IS Kalapuyan Land” exhibit in 2019. Although she now lives in Las Vegas, Littlebird was born and raised in Northwest Oregon. She is a member of the Grand Ronde Confederated Tribes and a descendant of the Kalapuyan and Clatsop Chinook people.

Littlebird’s passions encompass painting, writing and illustrating, as well as supporting and promoting the work of other artists, particularly indigenous folks who have been regularly excluded from the fine arts community. That’s what she set about to accomplish when recruited to curate a show for the Anita space.

“The show is significant for the native community, particularly because they don’t see themselves represented a lot,” she said.

While the installation involves both traditional and contemporary mediums, it all highlights, celebrates and explores the culture of local tribes native to the Northwest, Littlebird said.

“Even the contemporary work is referencing our culture,” she added.

Exclusion from the art scene

According to Littlebird, Indigenous artwork is often excluded from the world of fine arts. Part of the issue is that it is typically categorized as primitive, which is widely viewed as an inferior art form.

“That line of thinking continues to this day in fine art,” Littlebird said. “We aren’t seen as enough to be included among our peers who are non-native. … If we’re not making art that falls into the primitive category, people don’t know what to do with that.”

Other systemic issues are tied to the colonization and erasure of Indigenous communities, perpetrated by white supremacy.

While the show brings visibility to artists in the community, it’s also an opportunity for non-native people to interact with a culture they might not “know a lot about” or typically engage, Littlebird said. At the same time, it challenges general misconceptions about Indigenous artwork.

“People have like an expectation of what kind of art they’re going to see when they go to a native art show,” Littlebird said. “They’re expecting to see carving and baskets.”

While those traditional artforms are featured, the show embodies a much wider variety of mediums to illustrate that if a piece is created by an Indigenous person, then it is native artwork. Presenting an exhibit that includes non-traditional and contemporary mediums and techniques “can unwind a lot of stereotypes that other people have about us,” Littlebird said.

“The work I’m doing is to combat the idea that we only exist in the past,” she said, adding the show, at its core, is about fostering empathy and demonstrating “we are these people who are still here.”

“If I can lift up my community and at the same time help others in the broader community to see us and grow to love us a bit more, then that’s really the biggest gift for me,” she said.

Open to view from 1 to 5 p.m. Saturdays and Sundays and by appointment