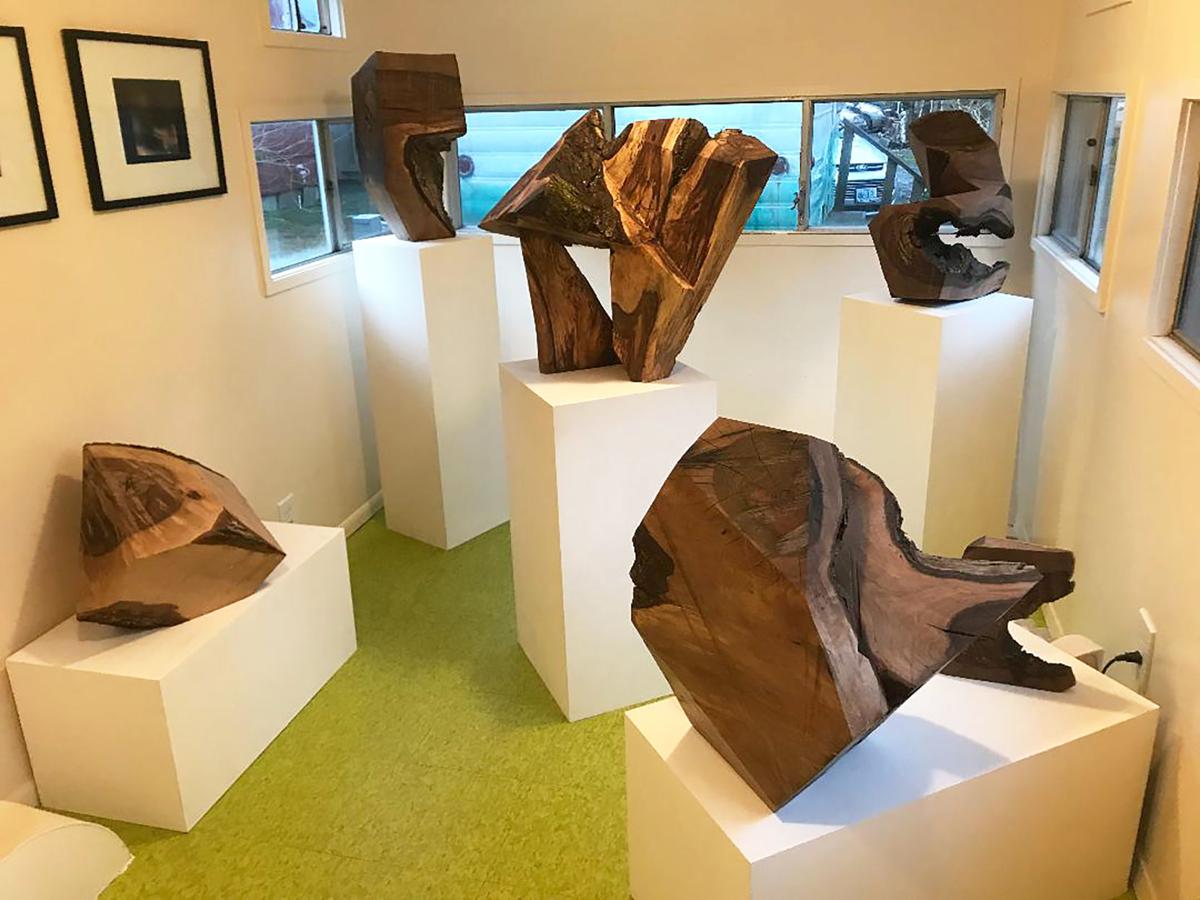 Sam Montaña's exhibit ‘Water and Wood’ showcases a variety of water- and ice-themed photographs, and sculptures constructed from walnut. 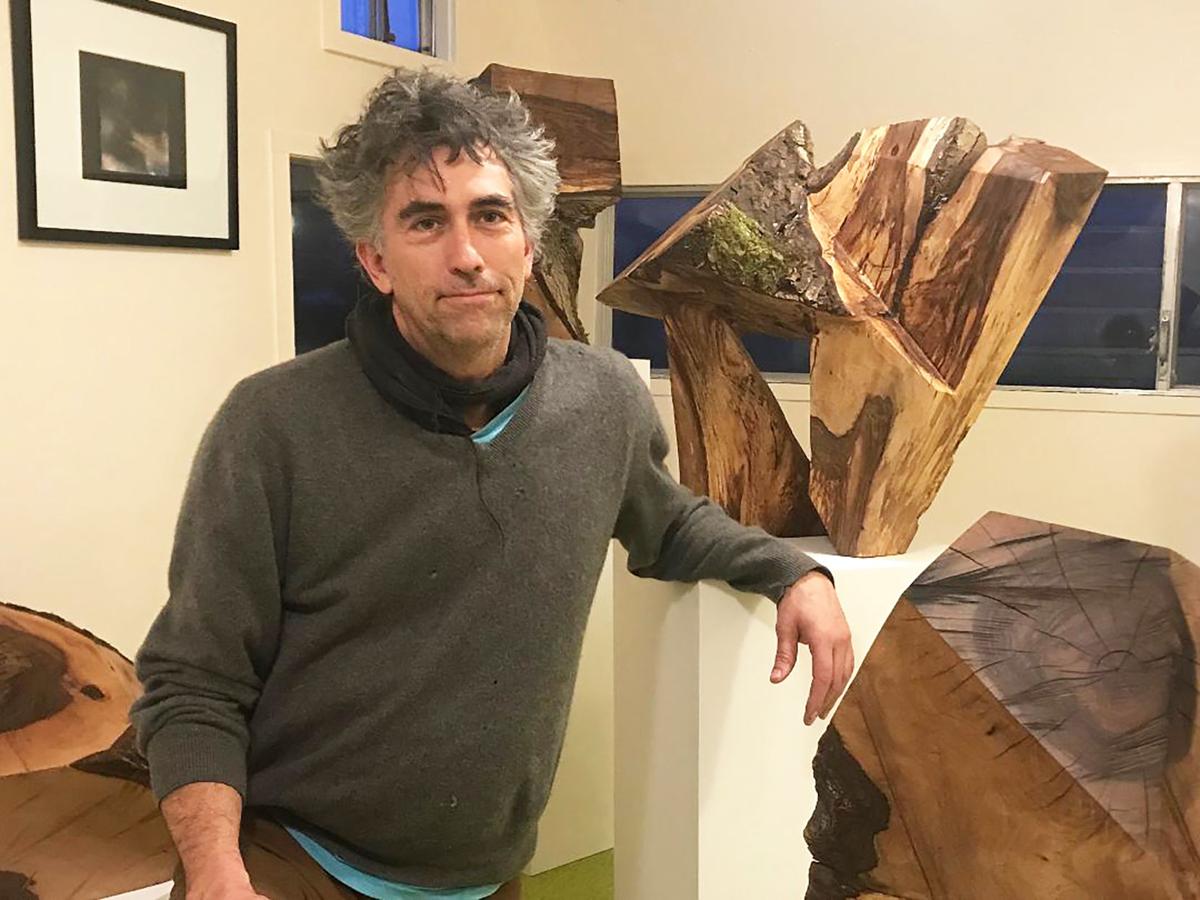 Sam Montaña's exhibit ‘Water and Wood’ showcases a variety of water- and ice-themed photographs, and sculptures constructed from walnut.

Portland-based artist Sam Montaña draws a conceptual line between water and earth with an array of geometric-shaped wood sculptures and reflection-capturing photographs capturing reflections in ice.

Montaña's work is being shown at the Sou’wester Lodge’s Art Trailer Gallery now through April 5. The exhibit, titled “Water and Wood,” explores the two natural resources.

Art has long been “a piece of how I navigate the world,” Montaña said.

Professionally, Montaña runs a Montessori-style school in Portland. Since college, he’s engaged in his artistic side, dabbling in photography, painting, drawing and sculpture.

"Sam is a pretty busy and responsible school administrator," said Sou'wester Lodge owner Thandi Rosenbaum. "He puts his efforts toward other people's learning."

Moñtana and Rosenbaum have known each other since the 90s, when they met in Portland.

Montaña’s exhibit includes several photos depicting reflections in ice that merge “above and below the icy surface in soft focus,” he said.

The geometrics of ice that etch their way into the flat plane, he said, are “echoed in the planes of the sculptures,” crafted from walnut.

Many of the sculptures have gone through a spalling process, where fungus grows into the grain of the wood.

“Below the surface are the waves of grain, ongoing rot and the insects returning the wood to soil,” Montaña said.

Although there is a disparate quality to the show—“sculpture and photographs don’t interrelate naturally,” Montaña said—he believes “there is a conversation there.”

"What's engaging about the exhibit is to see the quality of the pieces," Rosenbaum said.

Because some of the water showcased in the photos is frozen, the photos are able to mimic the grooves of the wooden pieces, Rosenbaum said. Despite their differences, the two elements combine to showcase similar color palettes and textures.

The gallery and the artist

Ultimately, Montaña decided to organize a traditional show, which challenged him to approach his own creations in a more professional and intentional manner—a challenge he was compelled to undertake as the next step in his artistic journey.

“It’s very different when you start thinking of that space as something you are going to inhabit,” he said, adding the perceptual shift from being “the observer to being the author” caused him to relate to the space in a unique way.

Considering the size of the trailer, Montaña was initially “intimidated by how much you have to self-select.”

Deciding what not to include in the exhibit was a challenge, but doing so influenced a new level of self-realization and growth for Montaña.

The work paid off though — Rosenbaum and others at the lodge agree Moñtana's work represents the lodge's artist residency program.

"The program is based on the expressive impulsive," Rosenbaum said. "In this modern world, we don't always have a place for that. Sam devotes himself to that type of work."

In Montaña’s view, creating artwork is a form of communication. He doesn’t see a value in making pieces that sit around his own house and instead wants his pieces to “have a life of their own.”

Although creating art can be self-gratifying, even therapeutic, Montaña wants to move beyond art as a self-serving pursuit and embracing the artist’s function as a conduit for shifting consciousness, he said.

“You are pushing at change and a shift in the way we as humans perceive the world,” Montaña said. “That’s more akin to the motivation I would feel: Not that I want to be sure I’m paid for my work, but more how I want to be part of the conservation.”