BELOW LEFT: Ashley Mundel, left, is the director of this year’s production, seen in costume with Patricia Von Vintage, right. 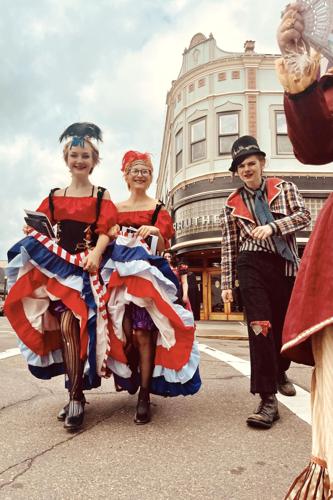 An illustration depicting scenes and characters from ‘Shanghaied in Astoria’ features artwork by Don Nisbett.

He’s at it again, that dastardly Max Krooke. How dare he kidnap Eric away from his sweetheart Virginia? Boo and hiss, squeal and stomp. Audience members throw popcorn at the villain.

It’s all part of the raucous fun at the musical melodrama, “Shanghaied in Astoria,” now showing on three nights each week through September.

Now in its 38th season, “Shanghaied” is one of Astoria’s perennial summer events that visitors and locals alike look forward to. Talented local actors relish hamming it up and encouraging audience participation. Pre-show olio acts entertain with short vaudeville bits that vary between dancers, singers, musicians, magicians, jugglers and comedians. The drama then centers around Eric, who is “shanghaied,” or kidnapped, away from Astoria and his sweetheart, Virginia, and forced into labor on a ship.

The show, created in 1984 under the direction of former Clatsop Community College professor Del Corbett, melds Astoria’s early shipping history with humorous nods to its Scandinavian heritage. Astoria was a bustling seaport in the late 19th century, notorious for its rough-and-tumble character.

Astoria was a town overflowing with immigrant workers, the majority of whom were men. Bars and houses of ill repute flourished, and unscrupulous ship captains, desperate for deckhands, employed the new enterprise of “shanghaiing” unwitting males.

“I wouldn’t change the original concept,” Ashley Mundel said of the annual show’s direction. Mundel assumed the Astor Street Opry Company directing helm in 2018 after having acted in the production for 15 years.

“As much as I love to act, I really like the process of being in control of the whole show and keeping the product alive for the community,” she said. “I just love burlesque and vaudeville and melodrama.”

Audiences seem to love the cornball antics, sometimes raunchy, exaggerated by the actors with flair and enthusiasm. Mundel started out as a makeup artist. Her love of dressing up is apparent, as the production costumes, created by Patricia Von Vintage, are appropriately flamboyant.

“It’s challenging, but fun,” Mundel said. As director, she manages a troupe of 36 actors, with different performers playing each role on different evenings. She’s also tasked with scheduling each night’s drummer and pianist, as well as guest stars who compose a spicy mixture of olio acts.

“We used to have a team of about 25 helping out with the show before the pandemic, but now we’re down to about six,” Mundel said. “Luckily, though, local businesses have really stepped up to sponsor us,” she added.

The Uniontown theater accommodates nearly 140 audience members, with gallery seating in chairs as well as bar tables. Beer, wine and non-alcoholic beverages are available, along with food provided by Astoria’s Table 360. Hot dogs and sausages, as well as cookies and cupcakes, are usually on the menu, as is the inevitable popcorn that, besides being eaten, functions as missiles of disapproval.

“I want everyone to know,” Mundel said of the performance, “the magic of Astoria is still real.”

Admission is $15 to $20. Tickets are available online, by phone or at the door