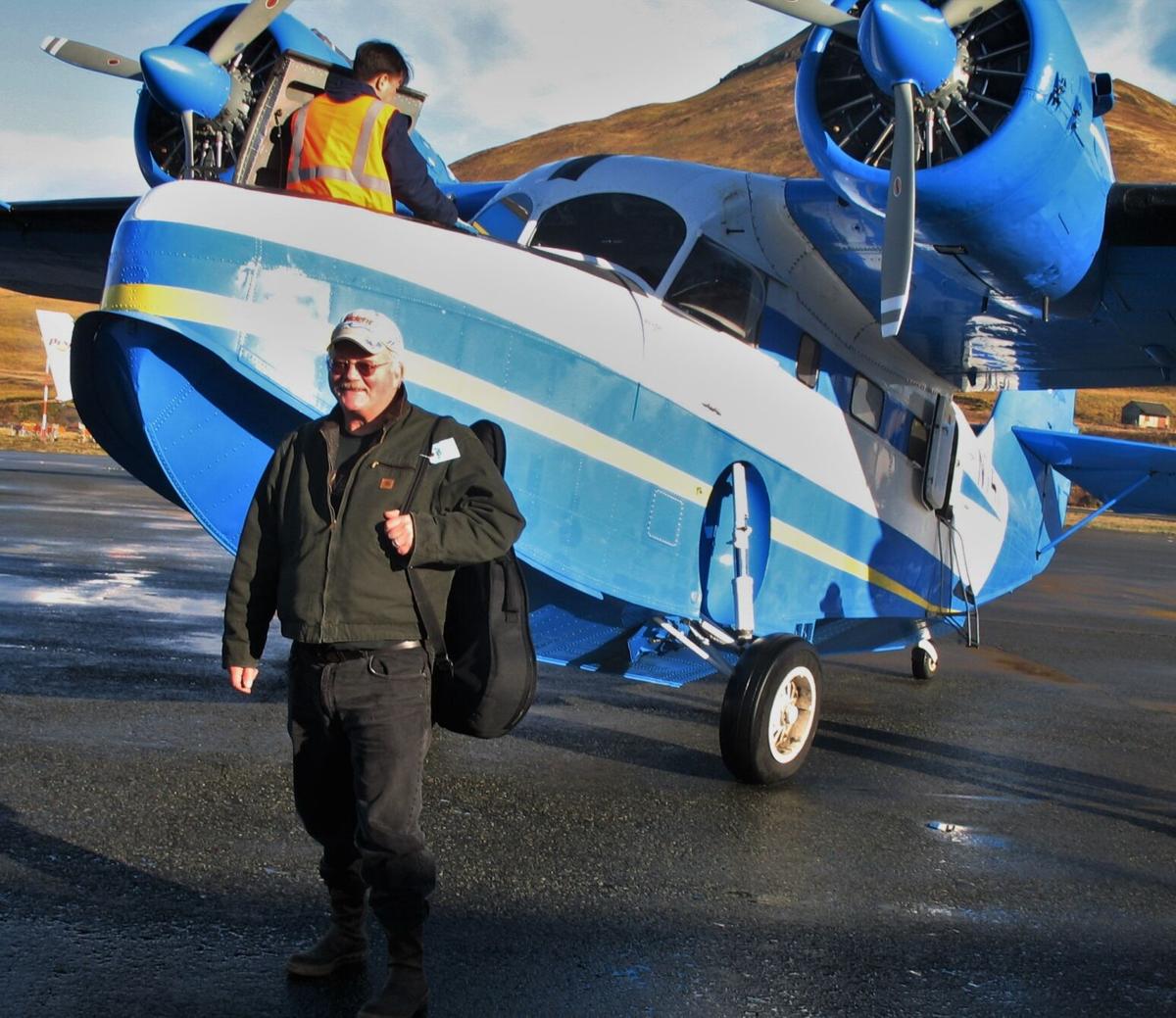 John van Amerongen with his Martin guitar on his way to tour the remote Aleutian processing plant. 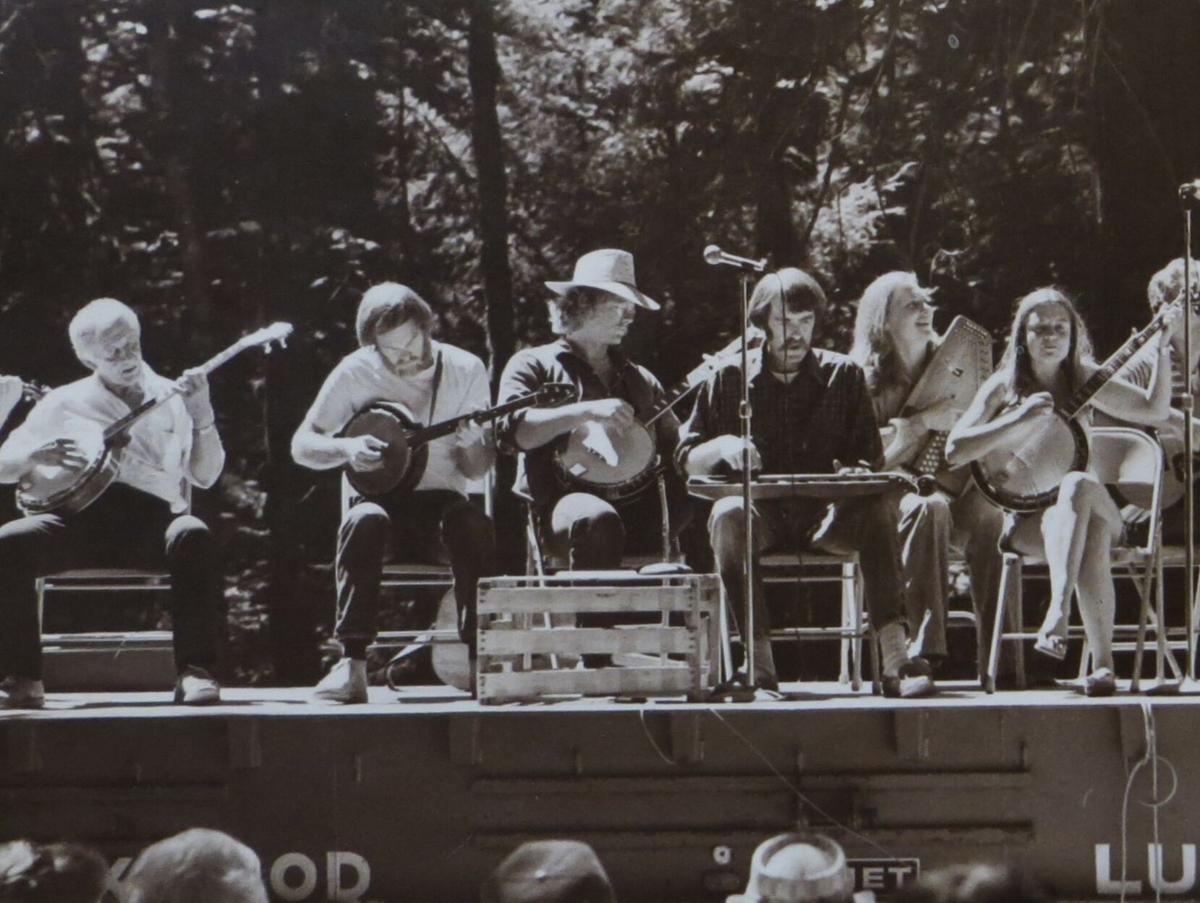 John van Amerongen, center, playing at a 4th of July event in Packwood, Washington, in 1978. 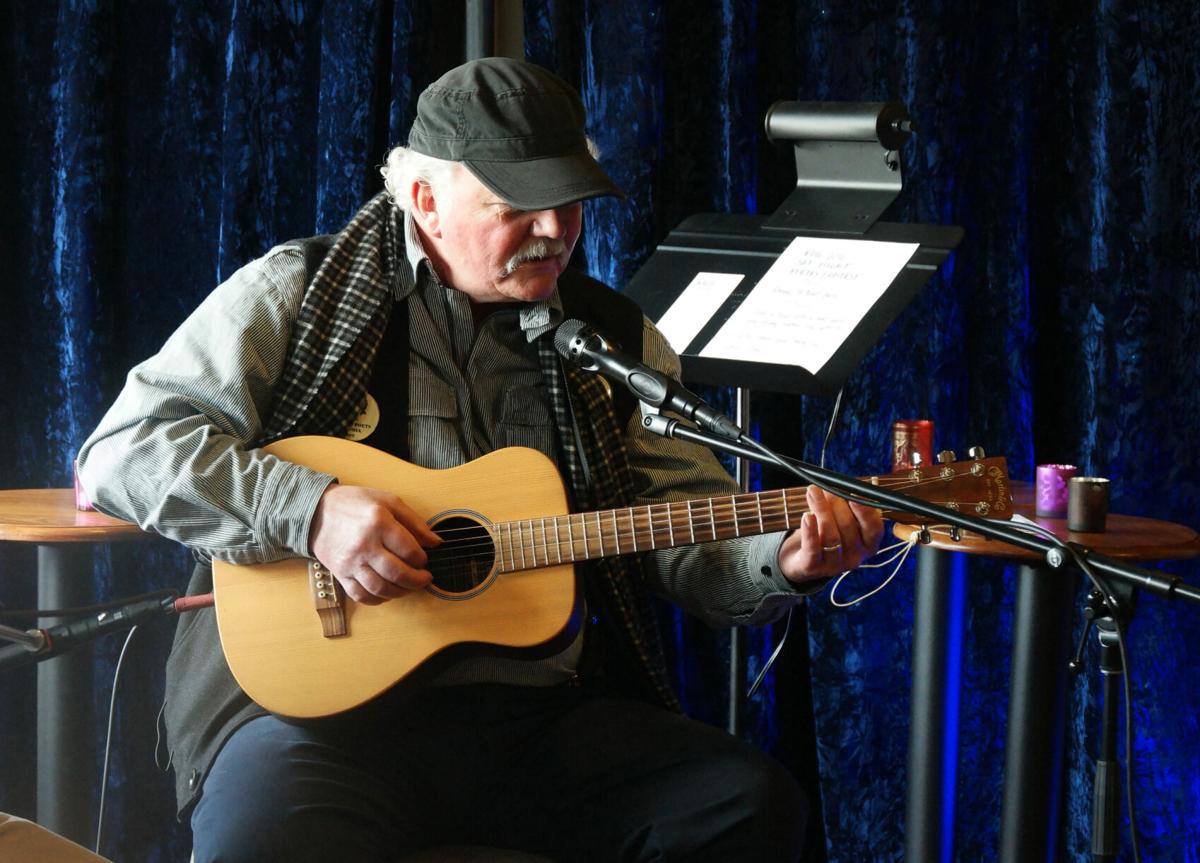 John van Amerongen performs at the FisherPoets Gathering in 2016. 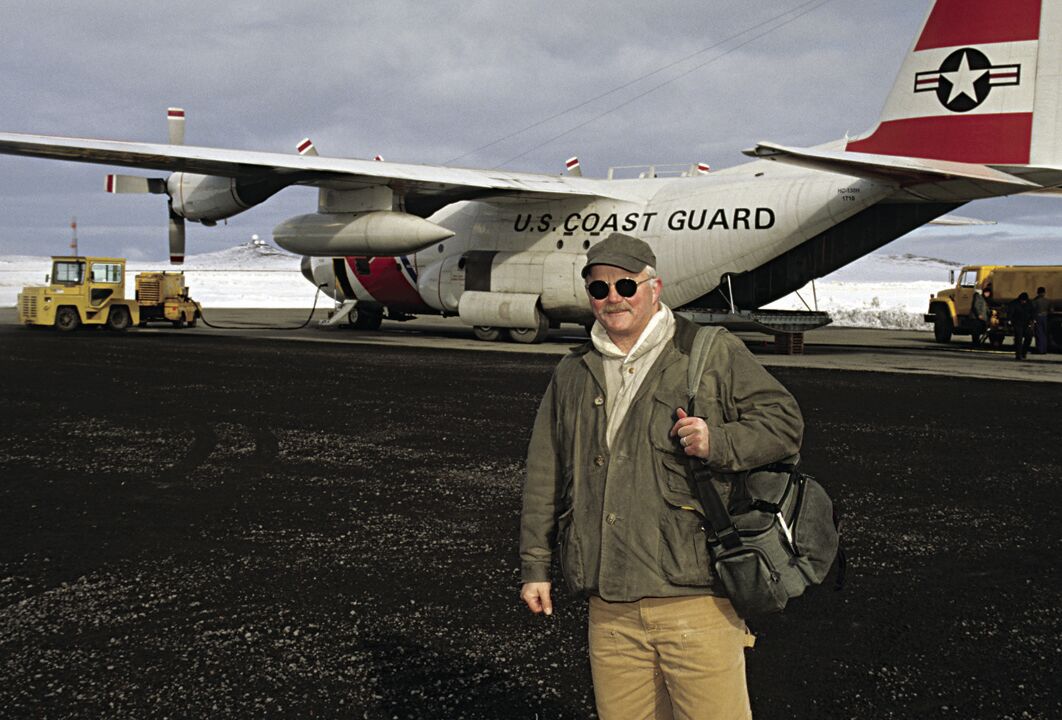 John van Amerongen before boarding a C-130 to do a fisheries patrol with the U.S. Coast Guard on St. Paul Island in Alaska.

John van Amerongen, known to many as “VanAm,” has been bringing his bluegrass-style music and poetry to the FisherPoets Gathering for nearly two decades.

Known for songs including “Truckstop Chili,” “The Ballad of the Arctic Rose” and “Night Watch,” van Amerongen’s songs tell the stories of different people he’s met and experiences he has had during his career in the fishing industry.

“I try to rely on the images and emotions that the fishing fleet feels as they’re out there and I’ve kind of learned those things by my own experience as well,” he said.

“Truckstop Chili” was van Amerongen’s breakthrough ballad. The song, written around 1977, is a talking-style song that tells a story about truck driving.

“I started writing tunes that made sense to me,” van Amerongen said. “Most of (these songs) fell into the occupational poetry and ballads category, especially about commercial fishing and such.”

“The Ballad of the Arctic Rose” is another of van Amerongen’s songs. The song weaves through the tragedy of the Arctic Rose fishing boat that sunk after being overloaded with an underprepared crew. Fifteen people were lost off the coast of the Aleutian Islands.

Another song, “Trip to the Bering Sea,” was written about a young man’s early experience with crabbing, his apprehensions about the job and trying to work as fast and effectively as possible.

“(For this song) I had the opportunity to kind of play god and decide what lesson this guy will learn,” van Amerongen said.

During his earlier years working in the fishing industry, van Amerongen met a number of fisherpoets. In 1998, Jon Broderick reached out to van Amerongen to get the ball rolling on what would become the FisherPoets Gathering. At the time, van Amerongen was editor at the Alaska Fisherman’s Journal. He kept a list of poets from his payroll and worked with Broderick to invite them to perform at the first FisherPoets event.

“Jon Broderick wanted to celebrate the stories that all of these fishermen have,” van Amerongen said.

As his time working on boat building was about to end, van Amerongen was contacted by the editor of the Alaska Fisherman’s Journal and invited to be the new editor of the publication.

“This terrified me because I had done a lot of writing but never put out a newspaper,” he said.

He accepted the position, which led to years of trips to Alaska to share the stories of fishermen up north. During summer, van Amerongen took trips hitchhiking from one fishery to another in Alaska. Hitchhiking allowed him to cover lots of territory and make sporadic plans to hop on boats with fishermen to watch them work firsthand.

“I gave up trying to meet with particular fisherman at particular times in particular places in Alaska,” he said.

He would board boats, listen to the stories of the fishermen, recite poems with them, cook food for them and drive boats at night to help crews.

“I didn’t want to just interview people at the docks, I wanted to see what it was like to be out fishing with the guys on the boats,” van Amerongen said. “I wanted to celebrate and produce stories about the people fishing in present day.”

Over the 22-year span of his career as the journal’s editor, van Amerongen visited every major fishing port in Alaska, he said.

“I did what I call the ‘splash and dash method,’ where I was able to soak up as much of the fisheries as I could,” he said.

Now, van Amerongen lives on Vashon Island in western Washington. He continues to write and perform songs and poetry.