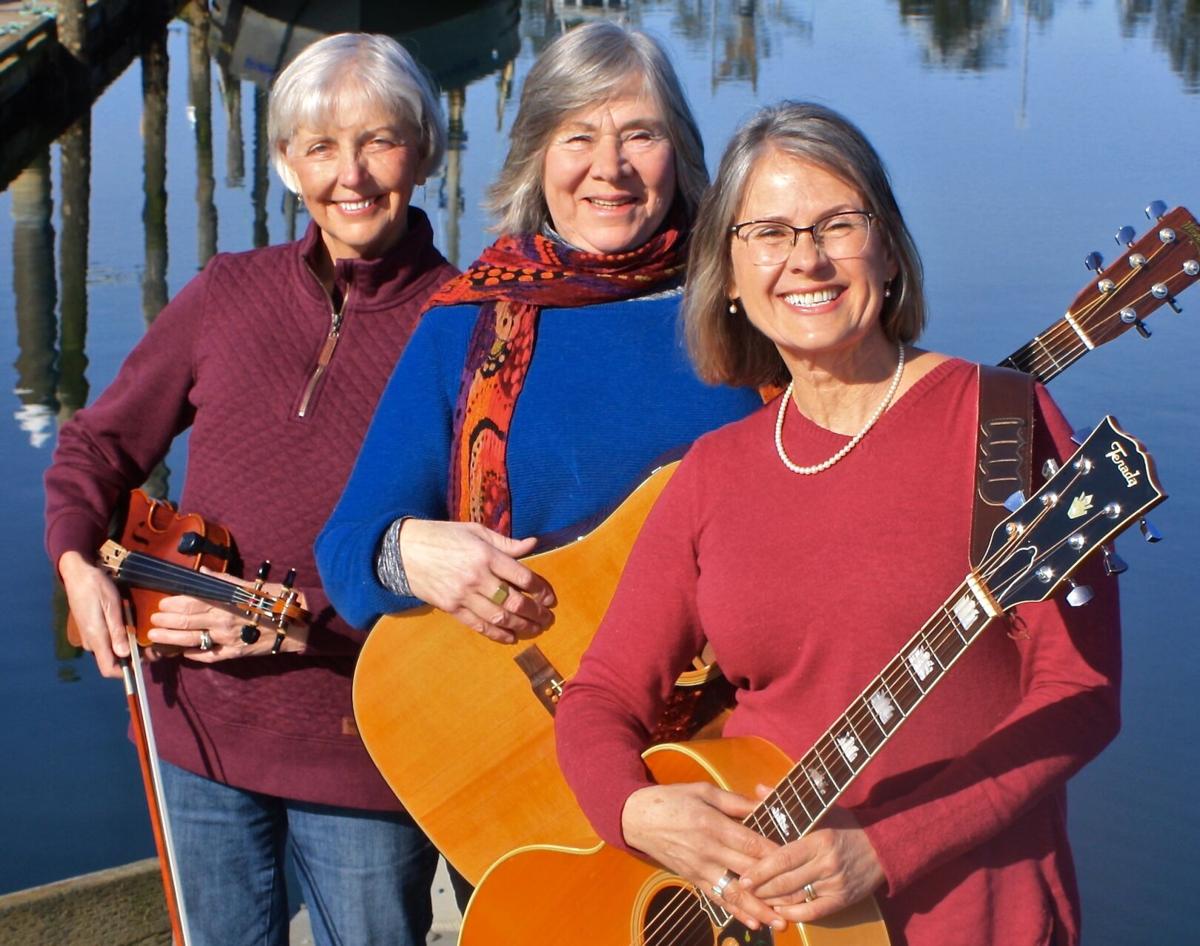 From left, Rita Smith, Bette Lu Krause and Christl Mack are the Oyster Crackers, pictured at the Port of Nahcotta. 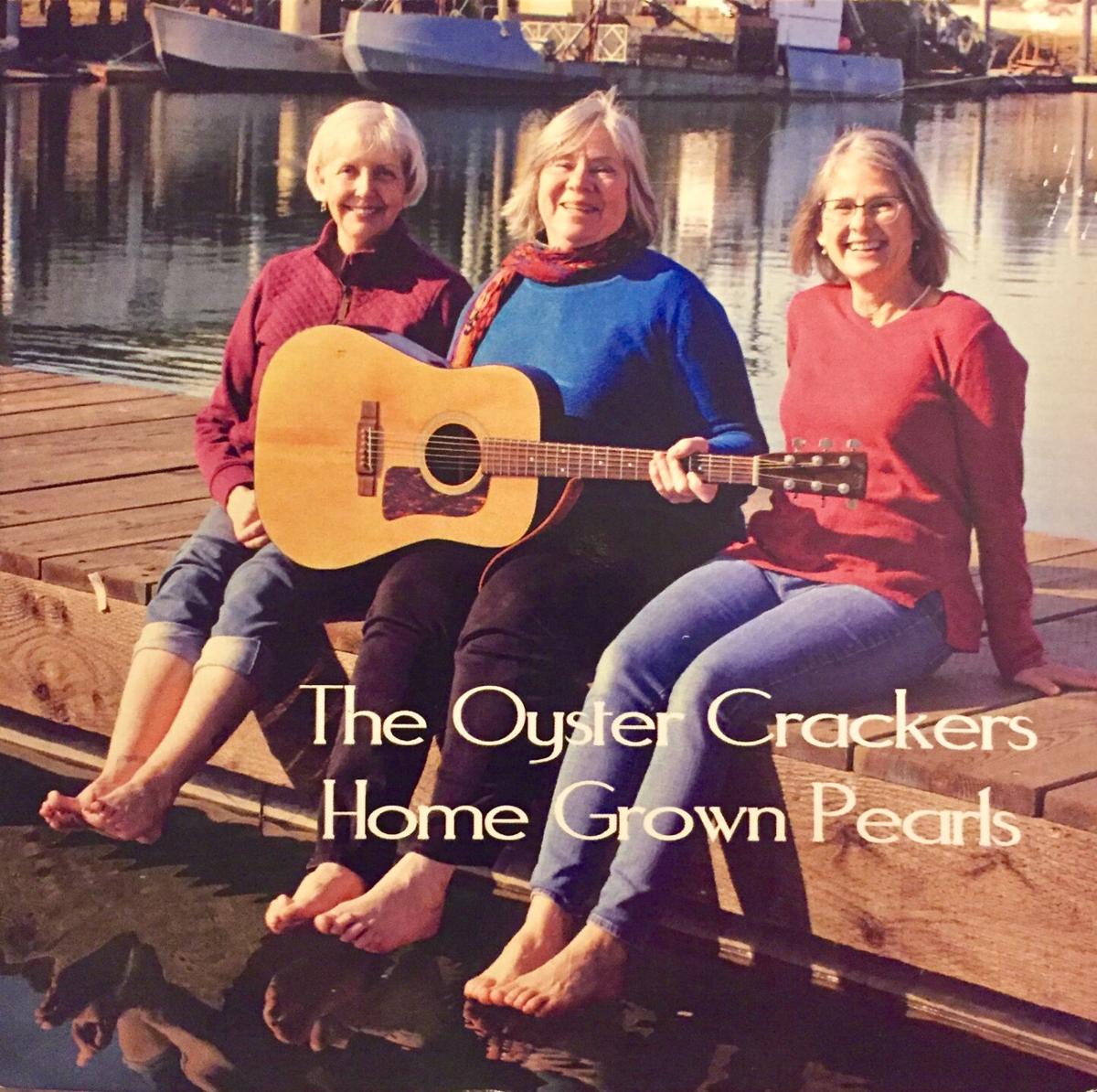 The cover of the Oyster Crackers’ new album.

The three musicians have sung for as long as they can remember, in church choirs and elsewhere.

One hiked around Germany singing with her parents.

Another began her fourth graders’ classes with daily song.

Those varied backgrounds blend into the Oyster Crackers. The group consists of Bette Lu Krause, Christl Mack and Rita Smith. For the past four years, they have been entertaining audiences on the Long Beach Peninsula with songs of hope and inspiration which they promote as “an eclectic mix of Americana, Celtic and original music.” They draw on guitars and a number of other instruments, including violin, mandolin and percussion. About one in four songs are performed a cappella.

Last week, the group celebrated the launch of their first album.

Creating the album was done all on their own, in part to avoid copyright hassles. The album has been supported financially by the Peninsula Arts Center. “Home Grown Pearls” features 11 songs penned by Krause and three by Smith, including instrumentals. Song subjects range from celebrating Willapa Bay to marking Krause’s father’s World War II service in France and Italy.

Mack embraces all of them.

“I’m not a songwriter — my pleasure is in finding and singing harmony,” she said. “I love that my friends Bette Lu and Rita create songs that are deep and meaningful, or funny, or have lovely melodies. Sharing those with our friends and audience is pretty cool.”

In part, the recording project grew out of the pandemic and the trio’s disappointment that they could not share their music with audiences. In November, they broadcast an online concert for the Artists in our Midst series at the Columbia Theatre in Longview, Washington. It is available to view at the theater’s Facebook page.

While they enjoyed open mic sessions online through Zoom, hosted by the Peninsula Arts Center, they began socially distanced in-person rehearsals at the River City Playhouse in Ilwaco.

“The acoustics are great and we were at opposite ends of the theater,” said Smith, who directs and acts with Krause at Peninsula Players’ shows there. “It was a challenge.”

The trio had full lives before they were united in music.

Krause, whose career in oceangoing ventures spans four decades, recently retired from Lindblad Expeditions, where she spent 25 years as a chief mate, expedition leader and naturalist, occasionally leading campfire singalongs on the beaches of Baja, California. A former gallery owner, she works as an artist and is completing a mural in Long Beach.

Smith grew up in Ohio, beginning piano at age 5. She taught herself the accordion by listening her mother. Her 30-year teaching career in Oregon was mainly with third and fourth graders.

“We started our day and ended our day with singing — my students loved it. Music makes me happy,” she said.

Smith taught herself guitar and harmonica to use in the classroom; in retirement, she learned the violin and mandolin.

Mack was raised in southern Germany by parents who loved to sing outdoors. A highlight of her youth was when her children’s choir sang in a cathedral.

“We often sang hiking songs in harmony,” she recalled.

As a fan of folk music, she brought her guitar when she moved to Long Beach in 1978.

“I have a lot of wonderful memories singing at Oysterville Vespers with Barbara Poulshock and performing German songs with my sister and also my friend Andrea Patten,” she said.

Their collaboration grew from performing together with the Bayside Singers, a Long Beach Peninsula choir. Krause hankered to learn “Heather’s Song” by Rory Block, using an arrangement by one of her favorite groups, Misty River.

After one Bayside rehearsal, she asked Mack and another musician, Teresa Goodwin, to sing the parts.

“We all loved the song and spent months learning it by ear,” Krause remembered. “I believe that Teresa came up with the name ‘The Oyster Crackers.’”

Misty River and the Wailin’ Jennys, both all-women groups, provided inspiration. After about six months, Goodwin stepped aside. Krause and Mack, impressed by Smith’s rich soprano and ability to play multiple instruments, invited her to join them.

All said their rapport creates the magic.

“We have been close friends through this. We enjoy being together,” said Krause, who has been inspired by songwriting camps and classes. “That joy of singing in harmony with other human beings is likely my happiest place.”

They record rehearsals to pinpoint improvements.

“We are not afraid to say, ‘I’m not getting the harmony,’” Smith said.

In recent times, cellist Phyllis Taylor has added to the group’s variety of sounds. Guest artists on the CD recordings are Al Price on banjo, George Coleman on guitar and Janet Clark on fiddle.

“It’s a real joy to perform and connect with the audience and share the stories that we are sharing musically — lyrics that people can relate to,” she said. “It’s scary to be up on stage, you bare your soul, you worry about the music, but it’s also a real special feeling. The audience responds in such a loving way to us.”

Where to purchase the album

View an online performance of the band at bit.ly/3o7XV5E

‘That joy of singing in harmony with other human beings is likely my happiest place.’