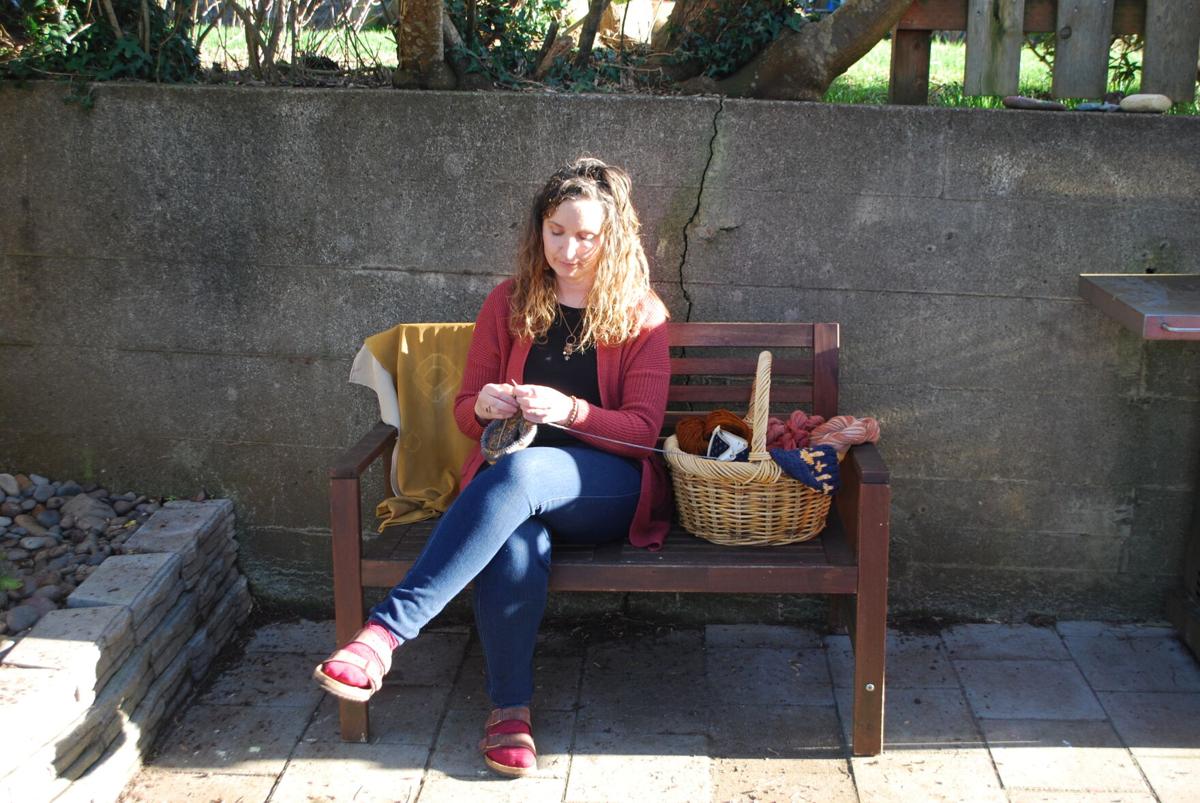 Erica Clark knits a mushroom-themed hat in her backyard. 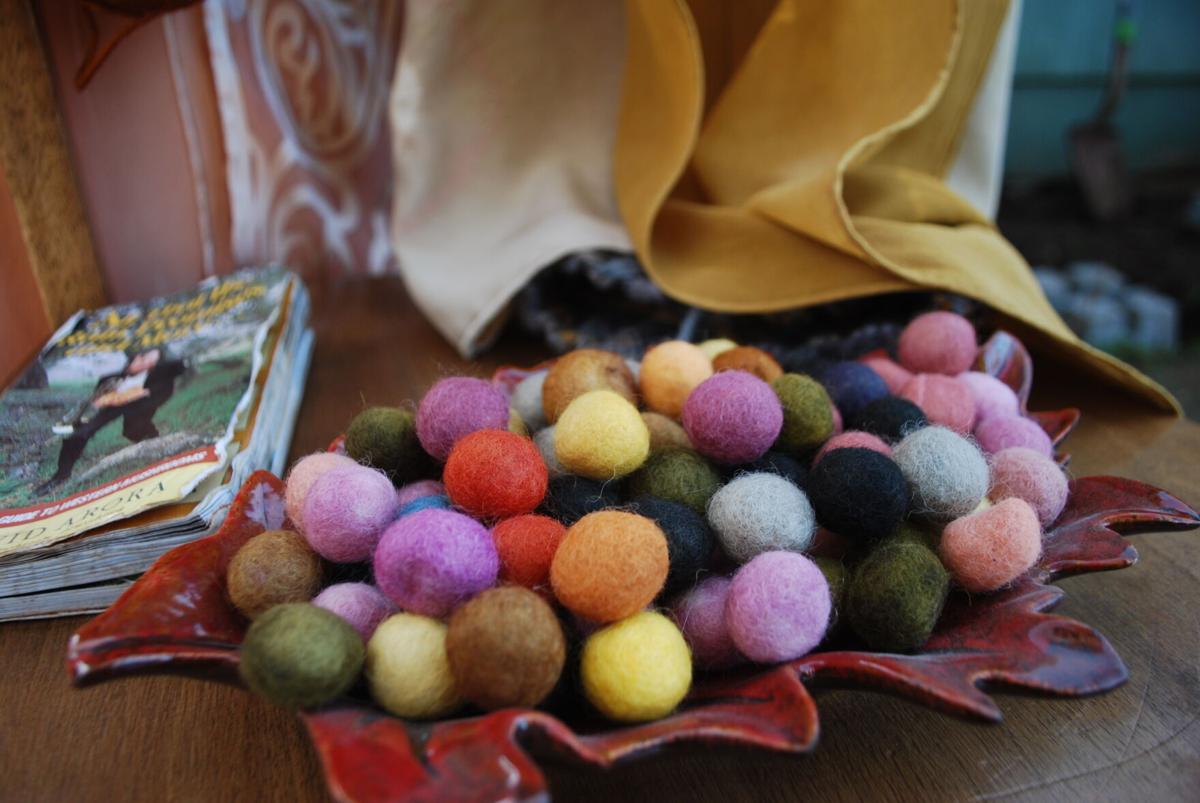 Erica Clark's collection of dyed wool balls. Each was created by dyeing fibers with foraged mushrooms, lichen and plants. 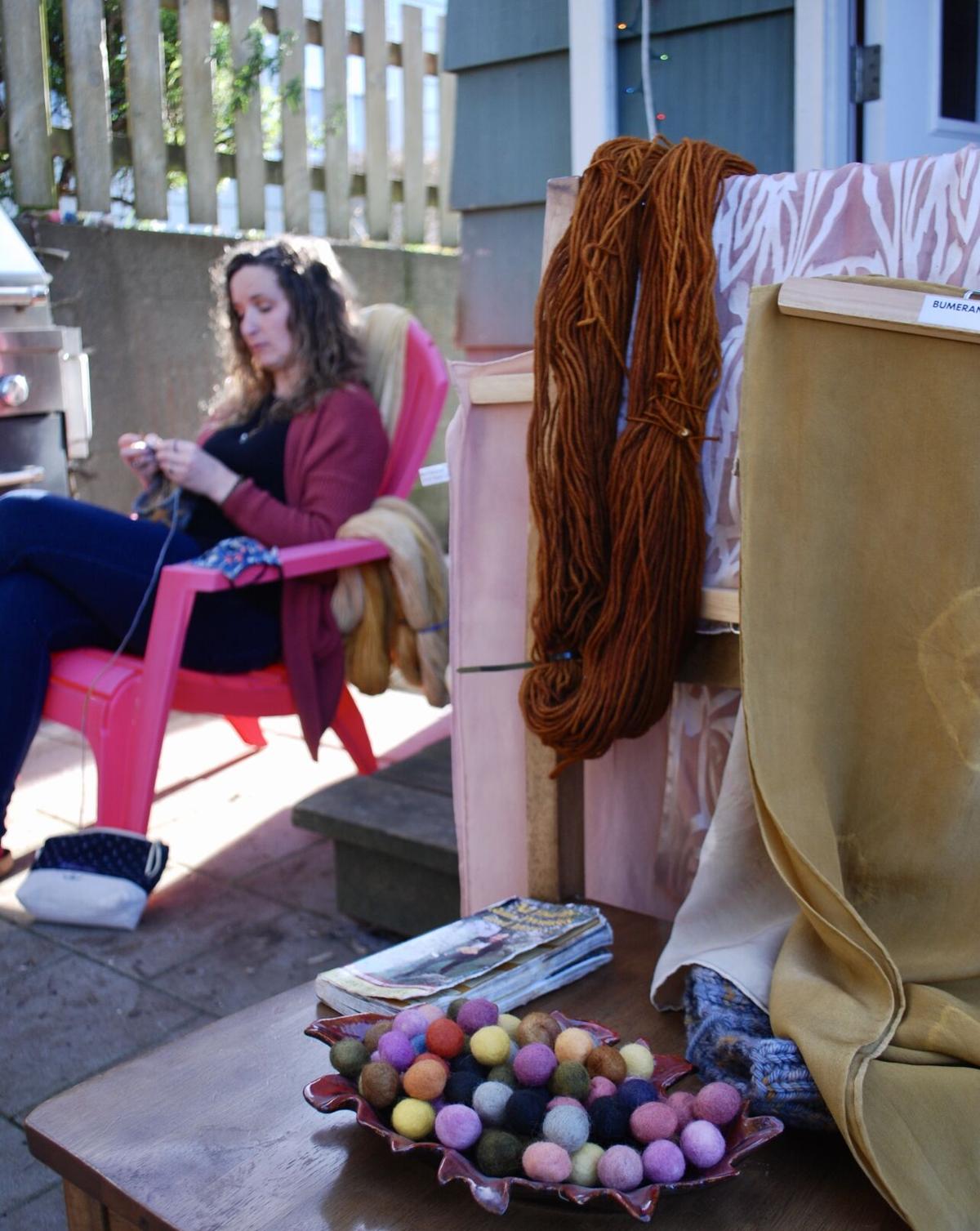 Erica Clark works on a fiber project in her backyard alongside naturally dyed silks and wool. 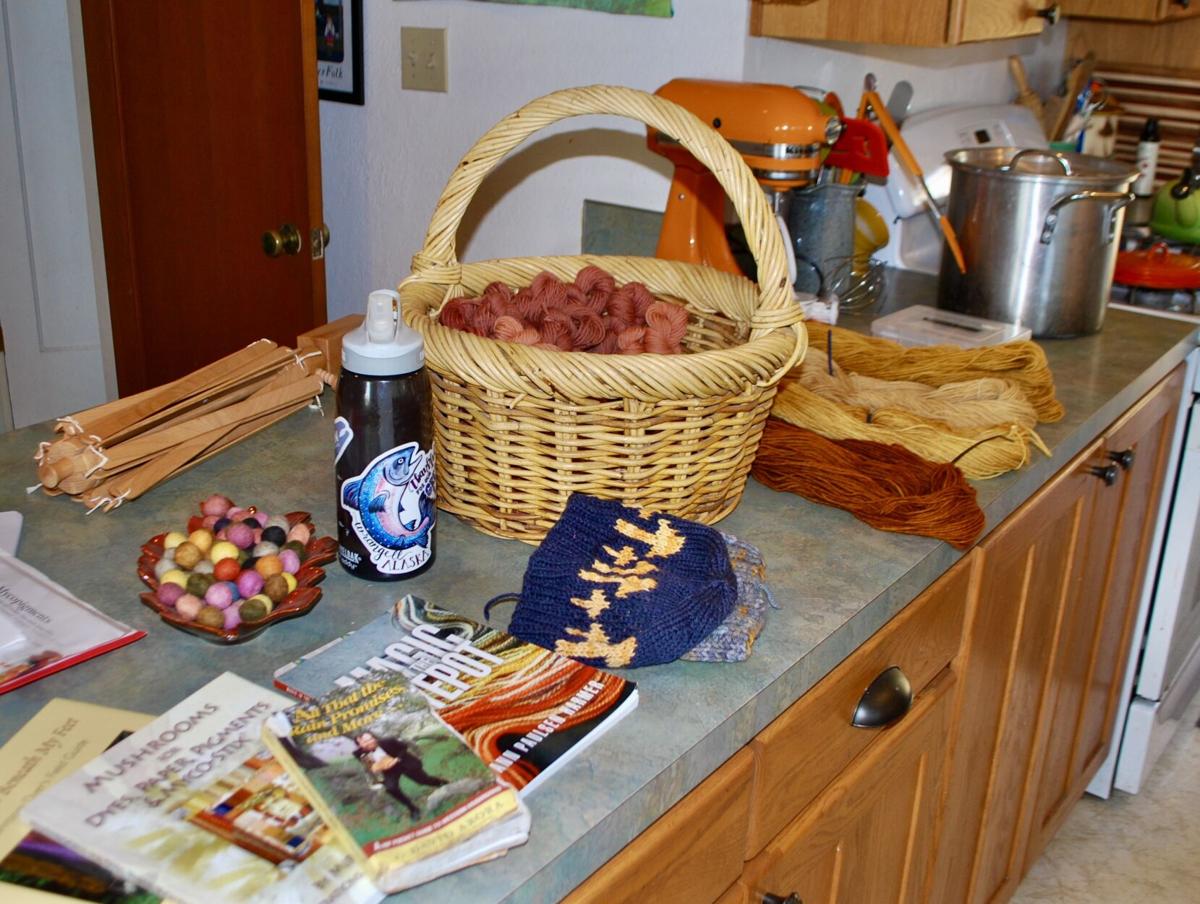 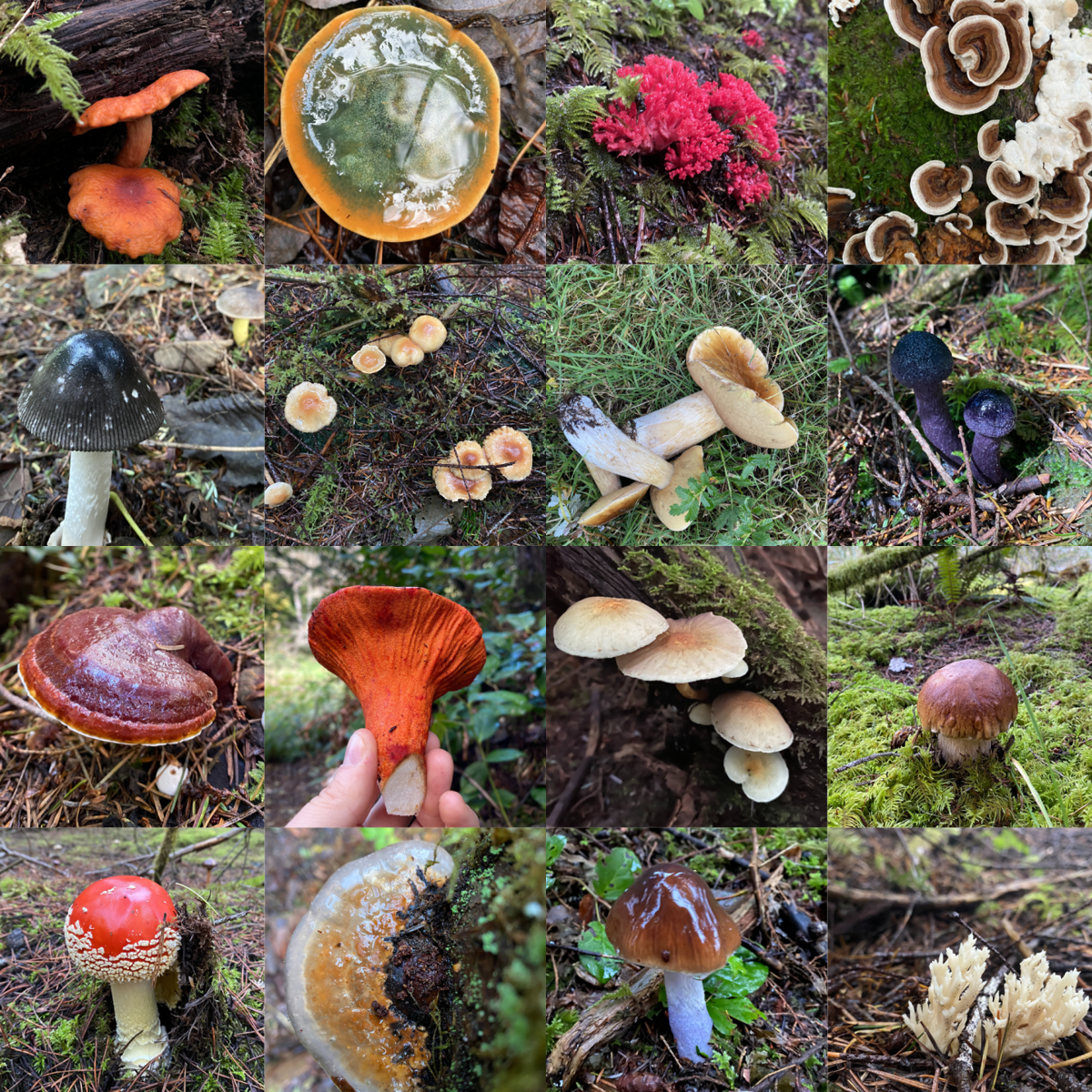 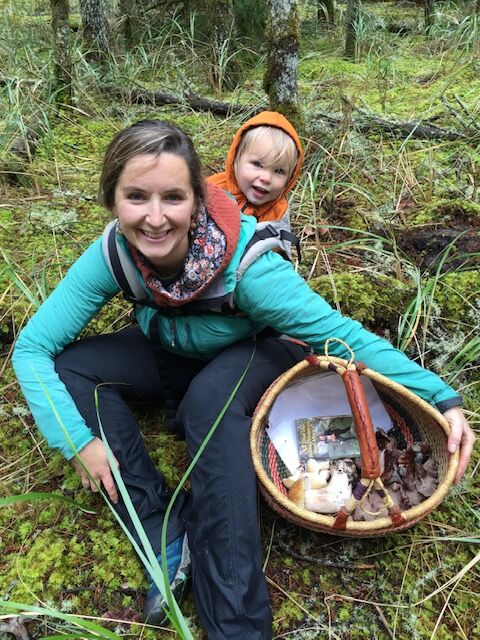 Erica Clark and one of her children during a foraging hike. 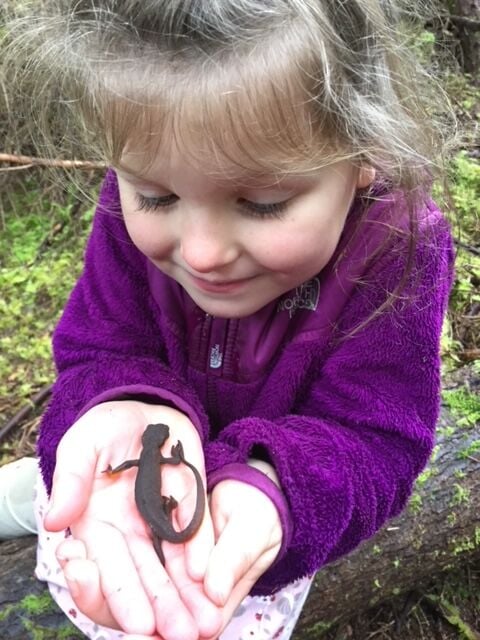 One of Erica Clark's children holds a salamander during a foraging hike. 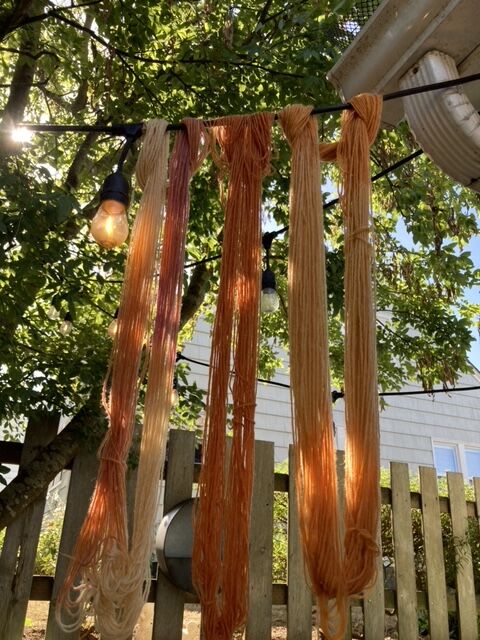 Throughout the coronavirus pandemic, many people have started new hobbies or returned to forgotten ones. In Astoria, one woman is connecting knitting and mushroom foraging through a unique passion: natural dyeing.

Erica Clark is a natural dye fiber artist, part of a niche community who experiment with using mushrooms to dye natural fibers.

Dyeing in her home’s kitchen, Clark’s colorful collection of silks and wool show off earthy tones produced by fungi, lichen and other foraged flora. A dish of small wool balls in a rainbow of hues showcases each dye bath Clark has produced.

Clark grew up in Kodiak, Alaska. She started using foraged materials for dyeing after moving from Kodiak to Cordova, Alaska.

“The idea of harvesting wild foods was ingrained from an early age. We hunted for deer and sustenance, gill-netted for salmon and everything my dad caught. But I wasn’t really introduced to mushrooms until I moved to Cordova,” Clark said.

Cordova’s climate is more hospitable than Kodiak for many fungi species. While there, Clark volunteered with nonprofits, including one that helped coordinate the Cordova Fungus Fest.

“It was Labor Day weekend, super rainy, but by the time that the wild mushrooms are popping up, the blueberry season is in full bore and the coho salmon return. It’s the crux of wild harvest at the end of the season,” Clark said. “Foragers from all across North America would come up for this.”

“She takes me around back and there are these folding tables with propane stoves and mason jars sticking out of big jelly pots, simmering with mushrooms and yarns,” Clark said. I still have that skein of yarn, it’s a lovely beige.”

Clark continued foraging and mushroom dyeing through many moves and a career change. She moved to Astoria about two years ago with her two young children and husband, who serves in the U.S. Coast Guard.

“I love dyeing with the fungus and lichen from this very area I call home,” Clark said. “It’s a really neat way to become in touch with the home space you’re occupying. For my kids, it teaches them the value of the land. My kids will pick up trash in the woods. We always have this joke when we find a big flush of mushrooms, ‘Mother Nature is thanking us.’”

Foraging for beginners and kids

Like the fruiting bodies of fungi releasing spores into the air, Clark has been busy enthusiastically spreading the tips and tricks of responsible foraging. She has informally led others on foraging adventures. Clark’s kids regularly go out on treks through the forest with her.

“I drilled home: you never put the mushrooms in your mouth. You can always pick them up, check them out, carry them as little parasols, collect them and pose them on stump — just don’t put them in your mouth,” she said. “For the most part, around 99% of mushrooms that we find in the woods are not harmful unless you ingest them.”

Clark recommends first-time foragers buy a copy of “All the Rain Promises and More” by David Arora.

“Then you have to just go in the woods and get off the trail. You have to walk into the woods,” Clark said. “Always go with another adult. Always tell someone who is not going with you the general area and what time you expect to get back.”

Clark recommends a few items to get started: a small tackle box “for all the teeny tiny things my kids have found,” a basket, a small knife, a brush for cleaning mushrooms and a whistle.

Clark’s dyeing set-up at home includes few materials: mushrooms (dry or fresh), a stove, mordant, natural fiber such as silk or wool, a stainless steel pot, a strainer bag and a drying rack. Mordant is used to pre-treat the fiber.

“The mordant helps the pigment adhere to the fabric. I’m using alum, it’s like cream of tartar ... Alum and iron are the most preferred and safest to mordant with, but you can get varying colors with different mordants,” Clark said.

Clark adds a ratio of mordant to fiber to a pot of boiling water. Then, the fiber simmers for an hour. After, Clark lets the fibers dry and cure overnight. After curing with mordant, Clark sets up a dye bath.

“It depends if you’re using fresh mushrooms or dried mushrooms. If you use fresh, you can do a one-to-one ratio of mushrooms, but dried can be fewer or more mushrooms … I chop them up really fine to can get as much surface area exposed,” Clark said.

“I put them in these paint strainer bags and basically make a big mushroom tea bag. I let it simmer for an hour, then get my fibers wet again. You don’t want to shock your wool or silk, you want to give it a similar environment when you’re changing it. I toss them in and let them simmer for an hour. Depending on the mushroom, you have to stir more or less. The pigment will adhere to the natural protein fiber as soon as it touches it.”

The process excites Clark because there are many factors to experiment with. She tracks and record each dye bath and exhaust bath’s results with different variables.

Many of Clark’s creations have been given as gifts to friends and family. She has sold her work at some holiday bazaars before. She plans to open an Etsy shop in February.