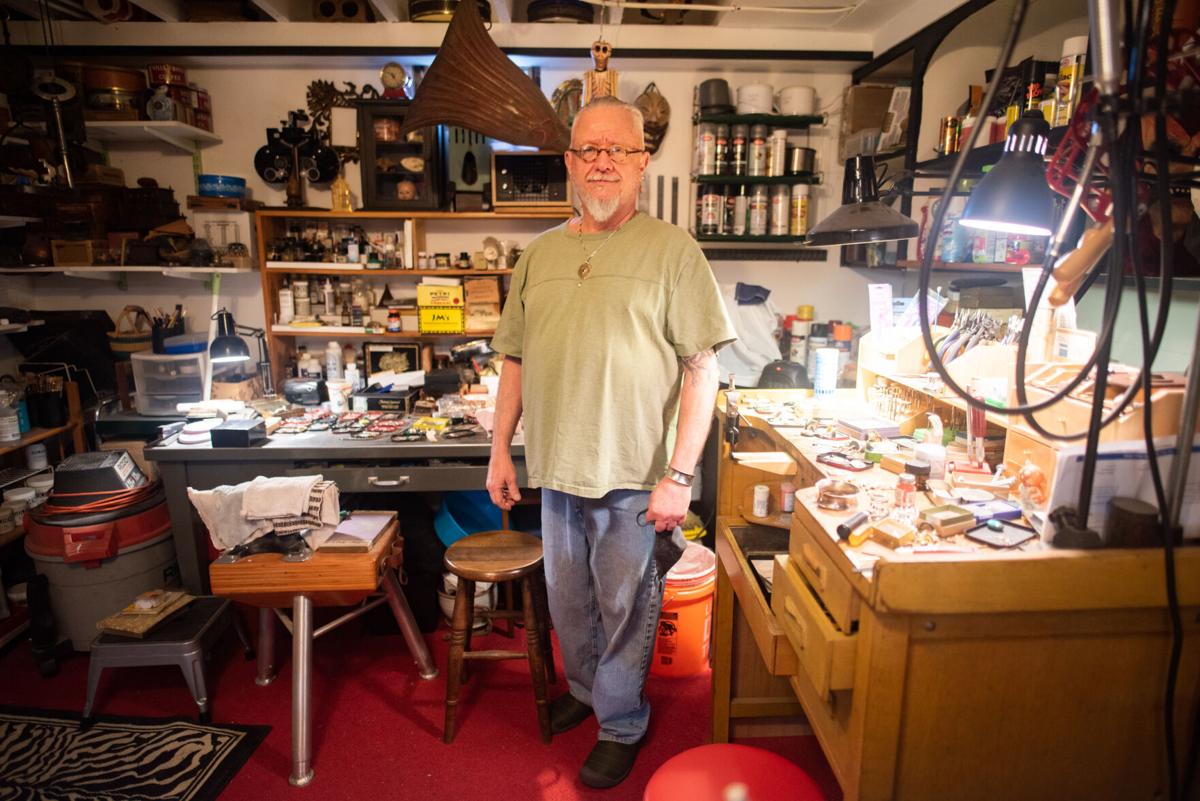 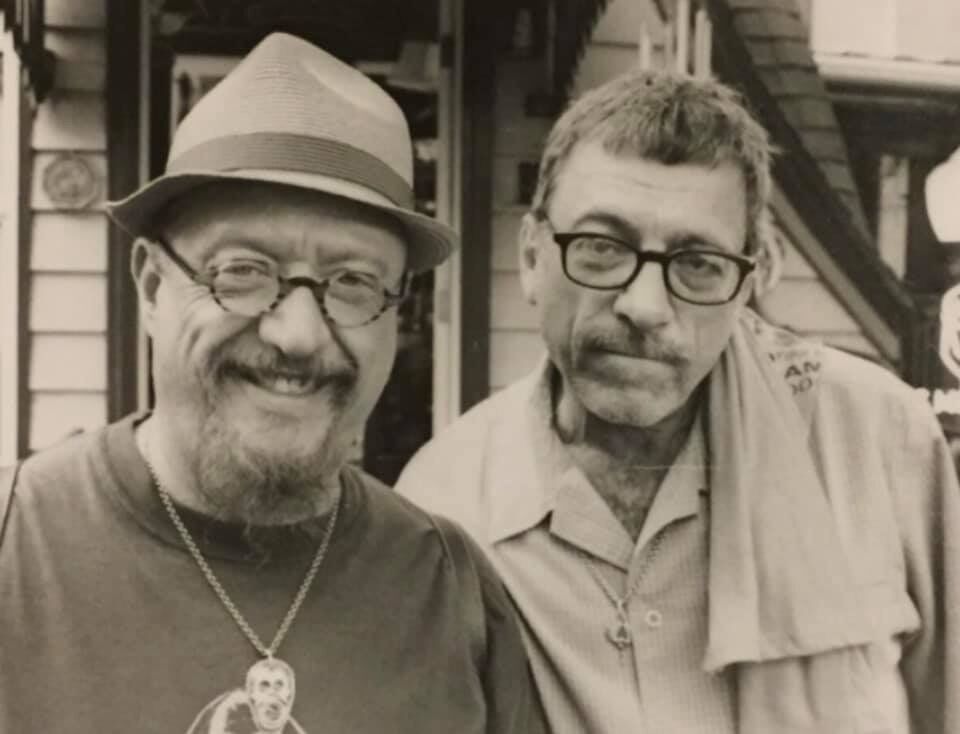 Porter, left, with his partner, Greg. 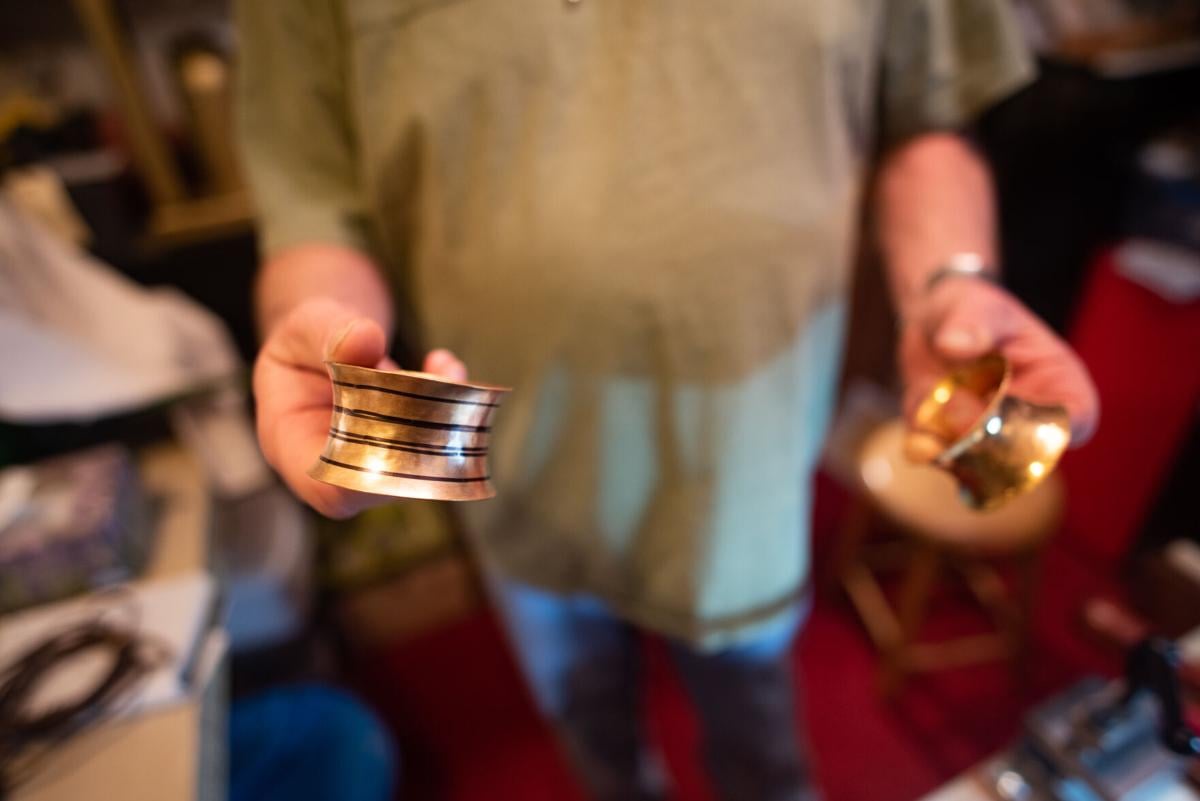 Tabor Porter is working on making bracelets from sheet metal. 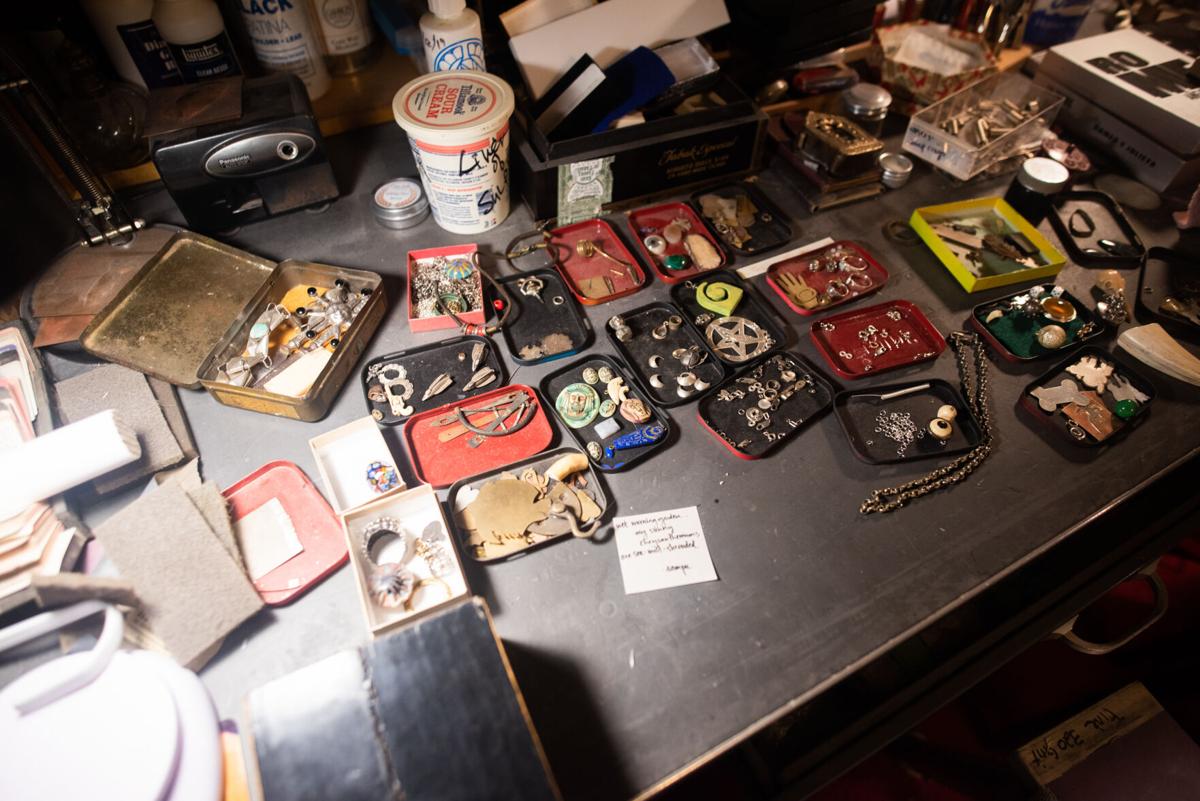 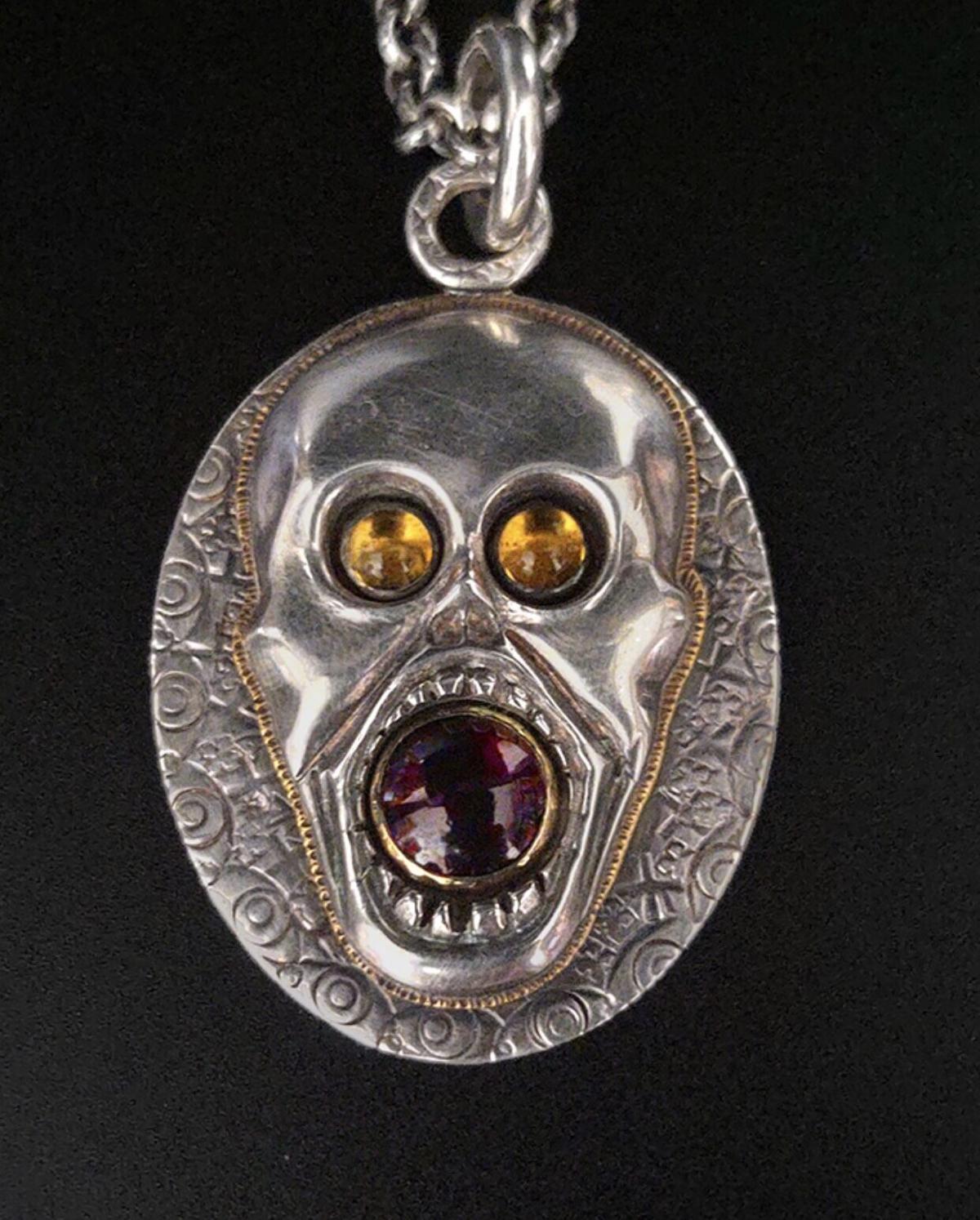 A pendant created by Tabor Porter. 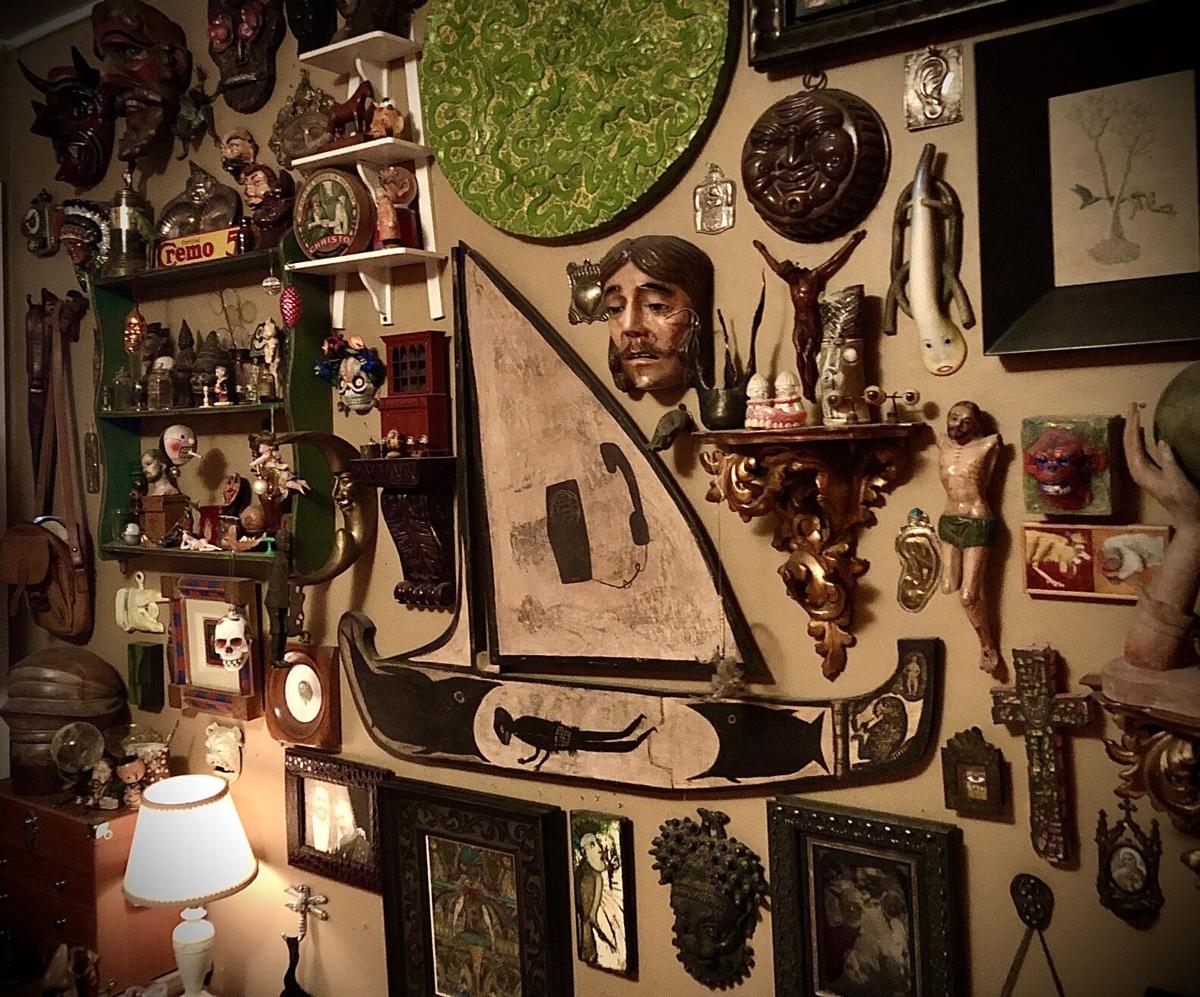 Tabor Porter proudly calls himself a recovering alcoholic and has been sober for three decades.

“Attribute my healing to my art — it’s also my AA meeting when I’m not at one,” Porter said. “My art is my solace.”

Donning a headlight and protective glasses, the artist hammers a stamp into a palm-shaped piece of metal known as a hamsa.

Over the years, Porter has collected a variety of stamps. Each stamp imprints a unique pattern onto the pieces he makes.

Porter creates jewelry and metal art in his home studio on the North Coast. His work has been featured regionally in galleries, most recently including a new show at RiverSea Gallery.

The show combines historical and contemporary skills. The gallery features new works by Porter year-round in an exhibit case.

Porter is known for integrating religious and spiritual symbols into his work. He credits his artistic pursuit of the metaphysical and collective unconscious as helping him heal as an AIDS survivor, which he has battled for 35 years.

Annie Eskelin, executive director of Astoria Visual Arts and a staff member of RiverSea Gallery, met Porter a few years ago. She was immediately drawn to his artwork for its depth and symbolism.

“They’re just so connected in a spiritual way. I think a lot of people grasp for that,” Eskelin said. “His work kind of connects you to something that is almost like answers in a way ... It’s really fascinating just how much work goes into each piece.”

Before becoming an artist, Porter embarked on a different path.

He was born and raised in Portland and studied urban planning at The Evergreen State College. Porter moved to Alaska, where he worked as a credit manager for a chemical company. Feeling unfulfilled by his work, Porter drank alcohol regularly.

In the 1980s, Porter returned to Portland for alcoholism treatment. In 1985, he was diagnosed with AIDS. He entered a treatment program at Quest Center for Integrative Health in Portland, one of the first places that offered a prescription cocktail that treated AIDS at the time.

Porter was ecstatic the treatment worked — but he didn’t avoid experiencing stigma. The doctor who diagnosed him told him people like him were going to ruin the health care system. Shocked by the doctor’s reaction, he advocated for the doctor to be fired.

Porter didn’t want anyone to be treated the way he was — the experience in turn motivated him to get healthier and pursue social justice. He focused on helping others diagnosed with AIDS and people in the LGBTQ community.

“I thought to myself, ‘I need to help other people who have this happen to them,’” Porter said. “And that sort of started me on that trajectory to get back into social work again.”

After 18 months of sobriety, he applied for jobs at a treatment center. Soon after, he became an accredited alcohol counselor.

While working as a counselor, Porter became interested in jewelry. He often visited his local jewelry store, Mother Goose, where the owners recommended he pursue his passion. He enrolled in the Oregon College of Art & Craft where he fine-tuned his benching and metalsmith skills.

“I got really lucky and I went there and after my first class and the teacher said, ‘You really do good work. I want to send you through this grant program. And we’ll see if we can give you a little scholarship for the next quarter,’” Porter said. “I went to school for free for almost two years. Then, I just stayed there because I became an assistant to the professors that came in the summertime.”

This was a turning point in Porter’s career. He met many of his contemporaries in the Portland art scene through his art education and at sober parties he would throw. This community of artists and social workers helped him with his recovery.

About four years ago, Porter moved from Portland to the North Coast. Porter and his partner, Greg, live in a colorful home overlooking Astoria with their pets. His personal paintings and gifted art from his friends and family cover the colorful walls of their home.

He finds solace from the calmness of local beaches and has once again found a community through the many galleries that show his work.